Budget vehicles are in a tough spot when it comes to interiors. Things like soft-touch plastics, upholstered dash and door panels, fancy switchgear and other details that make interiors traditionally nice can’t be had. Those cost money, and a budget car has to have a budget price. But the 2022 Ford Maverick proves that there are other ways to make an interior pleasant and welcoming than just with high-end materials.

For sure, the Maverick has very cheap plastics everywhere. It is a decent size vehicle that starts at barely over $20,000 with a hybrid powertrain, so it’s going to use low-end materials. But Ford makes the most of those materials thanks to colors and textures. The XLT, the middle trim, is the shining example. Most of the dash is a two-tone featuring a subtly blue plastic with gray highlights. Those gray highlights have flecks of other grays and blacks, giving it an almost stone-like look and a bit of texture. Then there are bright orange accents on the vents and in some of the storage areas. The fun continues with angular folds in the door panels and chunky bolt heads in the dash and door armrests. The upholstery mirrors all this with simple cloth, but with a woven texture on the gray parts and orange contrast stitching. 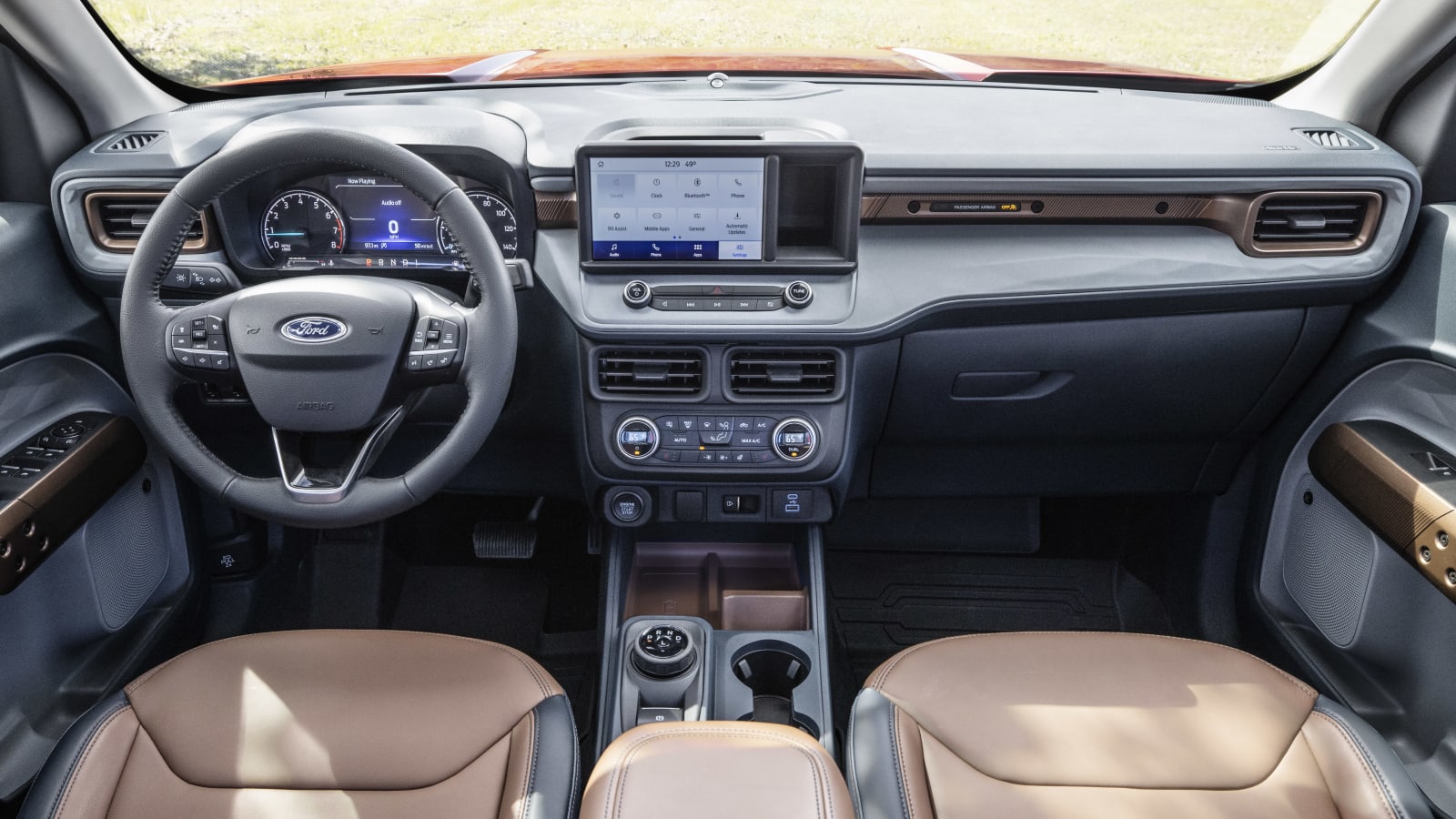 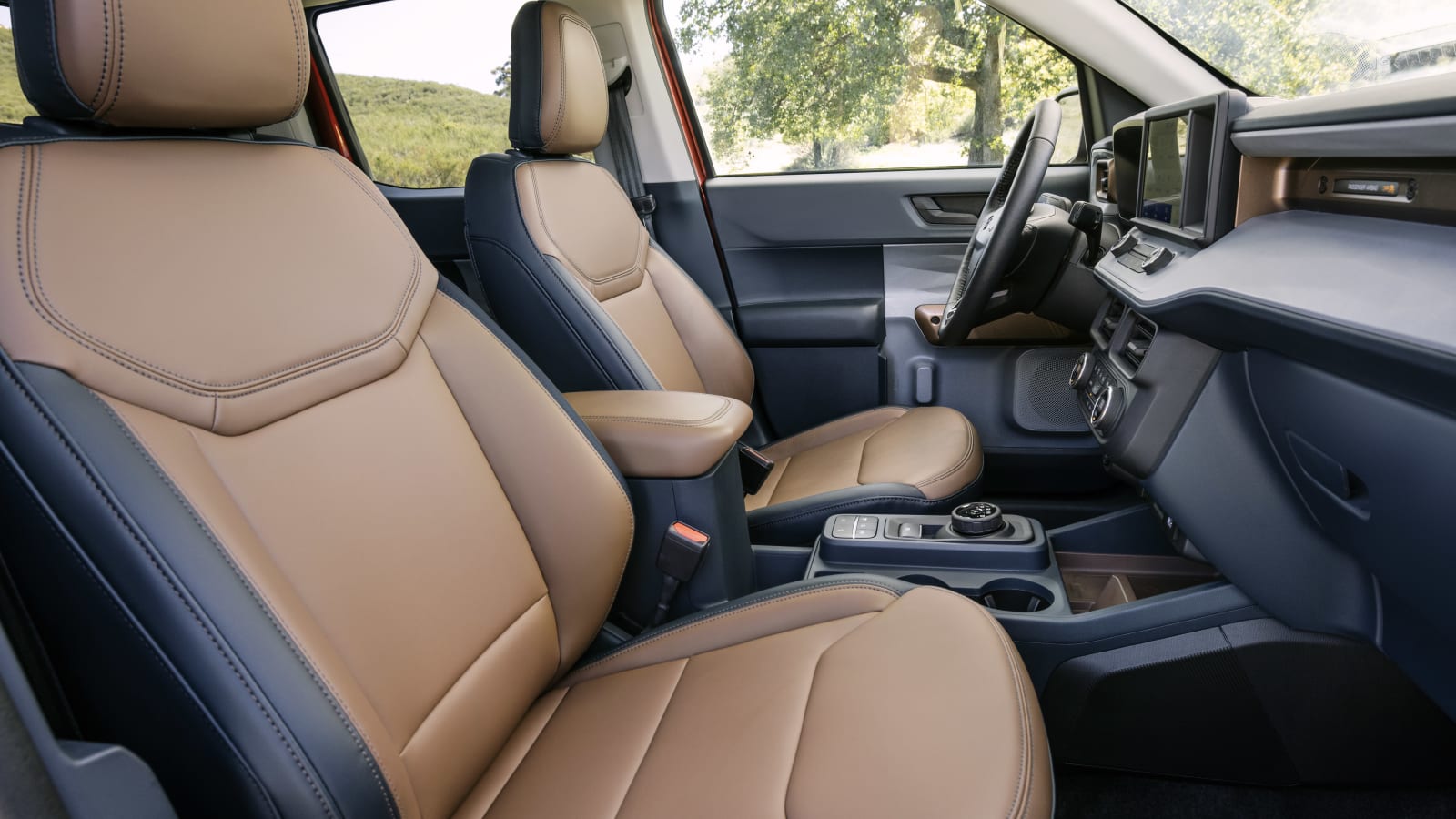 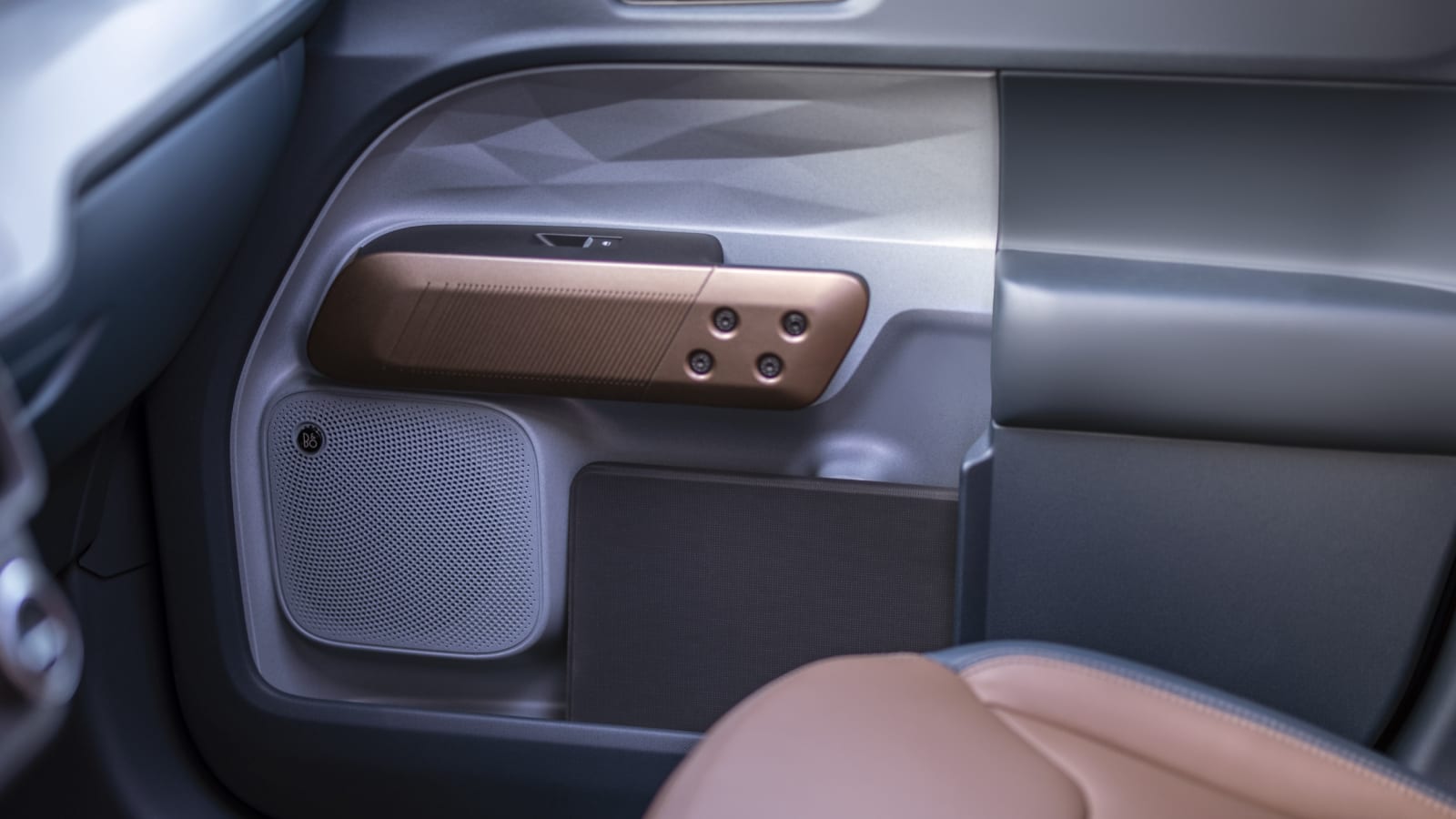 On either side of the XLT are the base XL and the high-level Lariat, shown above. The XL is a bit more dreary, since it loses the bright accents and nifty textured gray panels. The seats are also basic black cloth. But it does still feature the creative moldings and bolt heads. The Lariat has a more mature feel, adding sort of bronze-brown panels which match the brown leather upholstery. The Lariat also picks up a very welcome leather-wrapped steering wheel that feels much nicer than the standard plastic wheel in the XL and XLT.

There’s also a benefit to a cabin full of technically cheap plastics. It’s going to wear well. And in a truck that will presumably be used for dirty and bulky things, there’s less to worry about scraping, scuffing, tearing and breaking.

Another welcome aspect of the Maverick interior are the plentiful nooks and crannies for stowing things. There’s a bin next to the infotainment screen. There’s a bin with a variety of dividers under the center stack. There are deep bins in the doors. There are hidden ones under the rear seats. And if you want to get creative, there’s a slot at the back of the center console that can accommodate a specific type of mount. Ford has provided the specs on it and you can 3D print attachments with that mount to slot in, in case you need something specific. If you can’t find a place to put it in a Maverick, you actually probably have too much stuff. 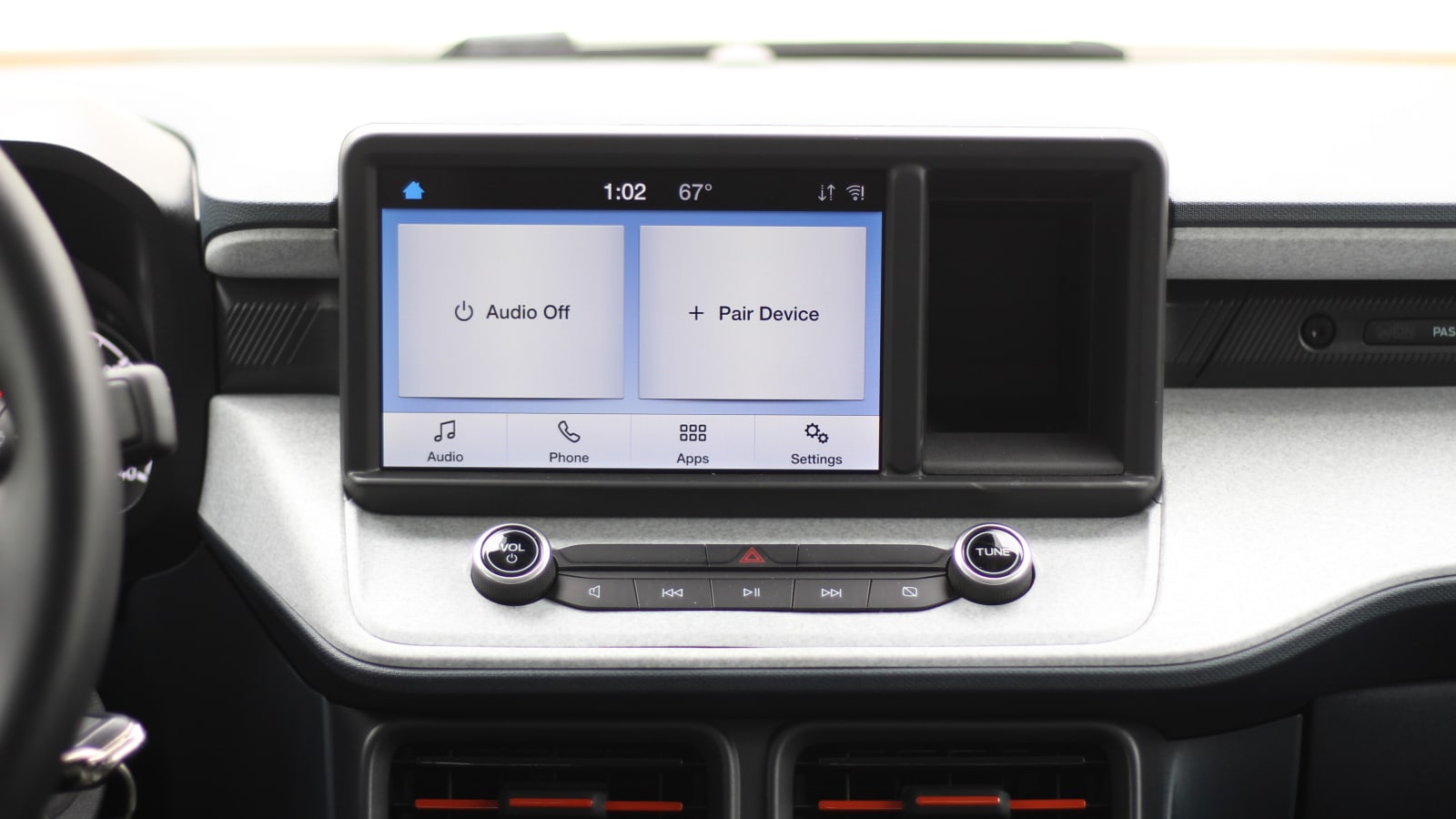 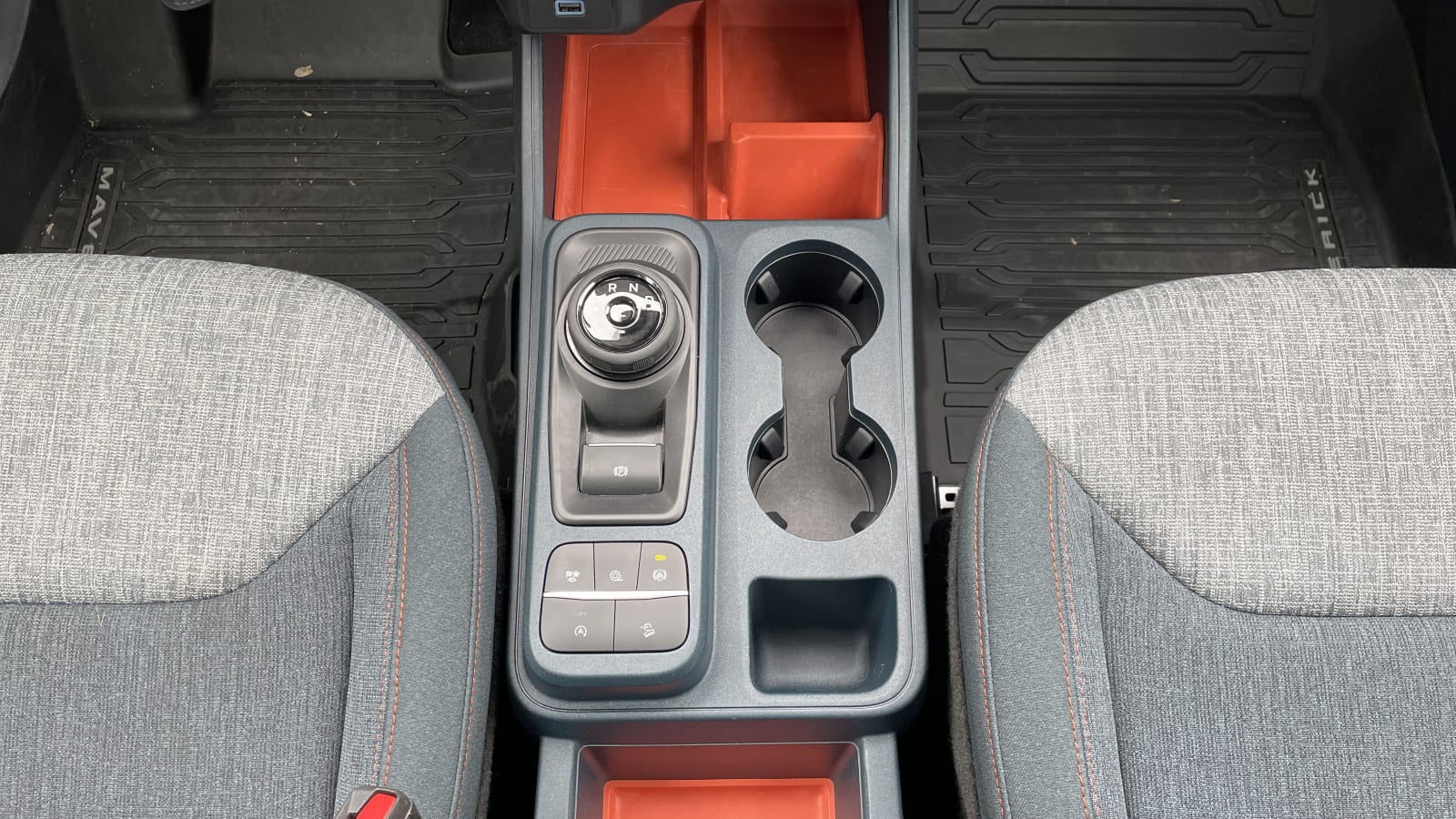 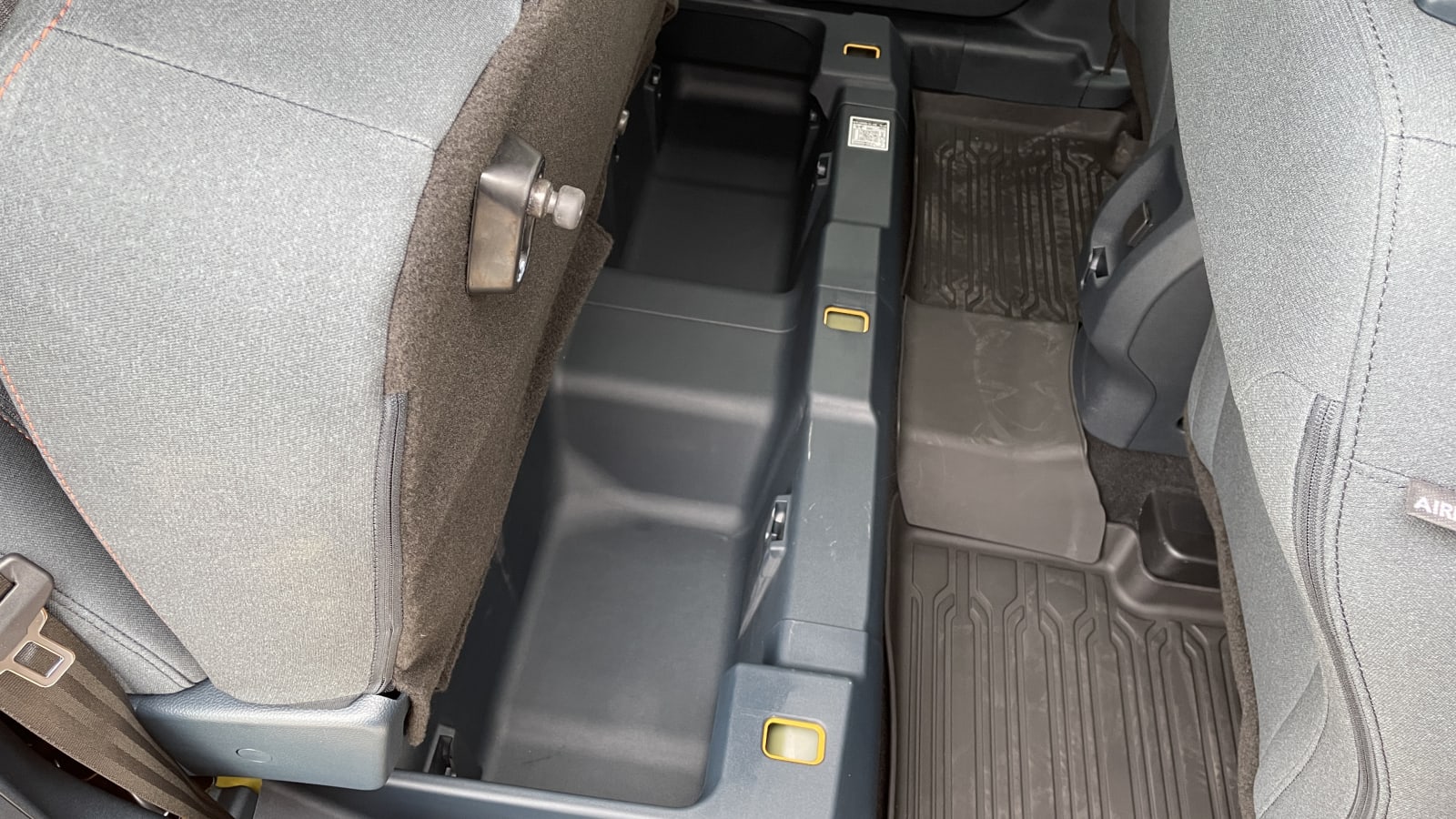 The Maverick’s cabin is fairly spacious, too. Up front, there’s enormous amounts of head, leg and shoulder room. The boxy profile undoubtedly plays a big role, here. The rear seats also have lots of head and shoulder room. Leg room is not quite as generous, but yours truly, weighing around 300 pounds and standing nearly 6 feet tall could sit comfortably behind himself. That’s a big benefit over the cramped rear of the Maverick’s rival, the Hyundai Santa Cruz.

The one real drawback in the Maverick is the seating. Like a number of recent Ford products, the front seats are a bit small and seriously lacking in support. They have very squishy cushioning, and if you’re on the larger side, it can feel like you’re spilling out of them. Even if you’re more petite, you might feel this way going around corners. No, it’s not a sports car, but many other mainstream automobiles offer more lateral support than the Maverick. But with the copious passenger space up front and fairly adjustable seats, a comfortable position relative to the steering wheel and pedals is easy to find. The rear seats are somewhat flat, but the seat back has enough recline that it doesn’t feel like you’re bolt upright like in some pickup trucks, so they’re pleasant enough for long periods of time.

The last part of the Maverick’s interior to cover is fairly positive, and that’s the infotainment and controls. Just like most other Fords, it uses a straightforward touchscreen interface. Icons are large and it’s relatively responsive. The screen itself isn’t as sharp as some others, but it gets the job done. And the rest of the controls are physical knobs and buttons, all of which handle volume, tuning and climate adjustments. It’s all simple and functional, just as you’d hope from a simple and functional vehicle.

As a whole, the Ford Maverick is a model for the car industry. It shows that cheap doesn’t have to be miserable. It can be creative, functional and appealing. These interior characteristics are part of why the Maverick is one of our favorite cars on the market right now.