DETROIT – “Whoa, that’s a GT3,” shouts a kid from the truck next to me as I roll to a stop on Woodward Avenue. At the next light, happy Woodward watchers — yes, people just sit on the side of the road and watch cool cars go by here in Michigan — enthusiastically gesture to rev up the engine. Approving thumbs-ups seemingly rain down from everywhere. Sometimes, it’s fun being the center of attention.

This car needs no introduction. It’s the 2022 Porsche 911 GT3, and the world already knows it’s the greatest thing since sliced bread. You’ve been fed exactly this from every single written story or video you’ve consumed about it. That’s why it garners the attention and awe that it does from even the youngest car enthusiasts just setting out into the world of automobiles. This Guards Red coupe isn’t just a Porsche 911. It’s a GT3, and that’s all it takes to move it into an entirely different level of relevancy and awe.

I too felt starstruck upon first laying eyes on it. Yes, I put the car journalist cap on tightly before entering the driver’s seat, but it would simply be inhuman to not have a visceral reaction to knowing you’re soon going to be driving a 911 GT3. It’s cliché, but this is a bedroom poster car, the likes of which any young enthusiast — like that kid at the stoplight — grows up hoping to drive one day. If my experience driving other Porsches is any indication, it’s that meeting your heroes isn’t a problem if they wear Porsche crests.

And so, I go about meeting this particular hero. Despite the massive GT3 aero on the outside, looking out from the driver’s seat of a GT3 isn’t a life-shattering experience. At its core, it’s everything that’s good about all the other 911s. The seat sits low to the floor. Its small-diameter steering wheel nestles into your hands just right. Porsche’s slick manual gear lever is placed ergonomically in the center console, and the view out the windshield is stupendous. Visibility is one of the most underreported elements of sports cars and supercars, but you’ll never complain about your sightlines in a GT3. That is, unless you look out the back. Porsche’s downforce-inducing new wing may push up to 840 pounds down onto the back end of the car, but it blots out most of the 911’s otherwise useful rear window. Of course, considering how cool it looks, I can’t complain. Plus, there’s a solution: Just buy the GT3 Touring if it’s that bothersome. 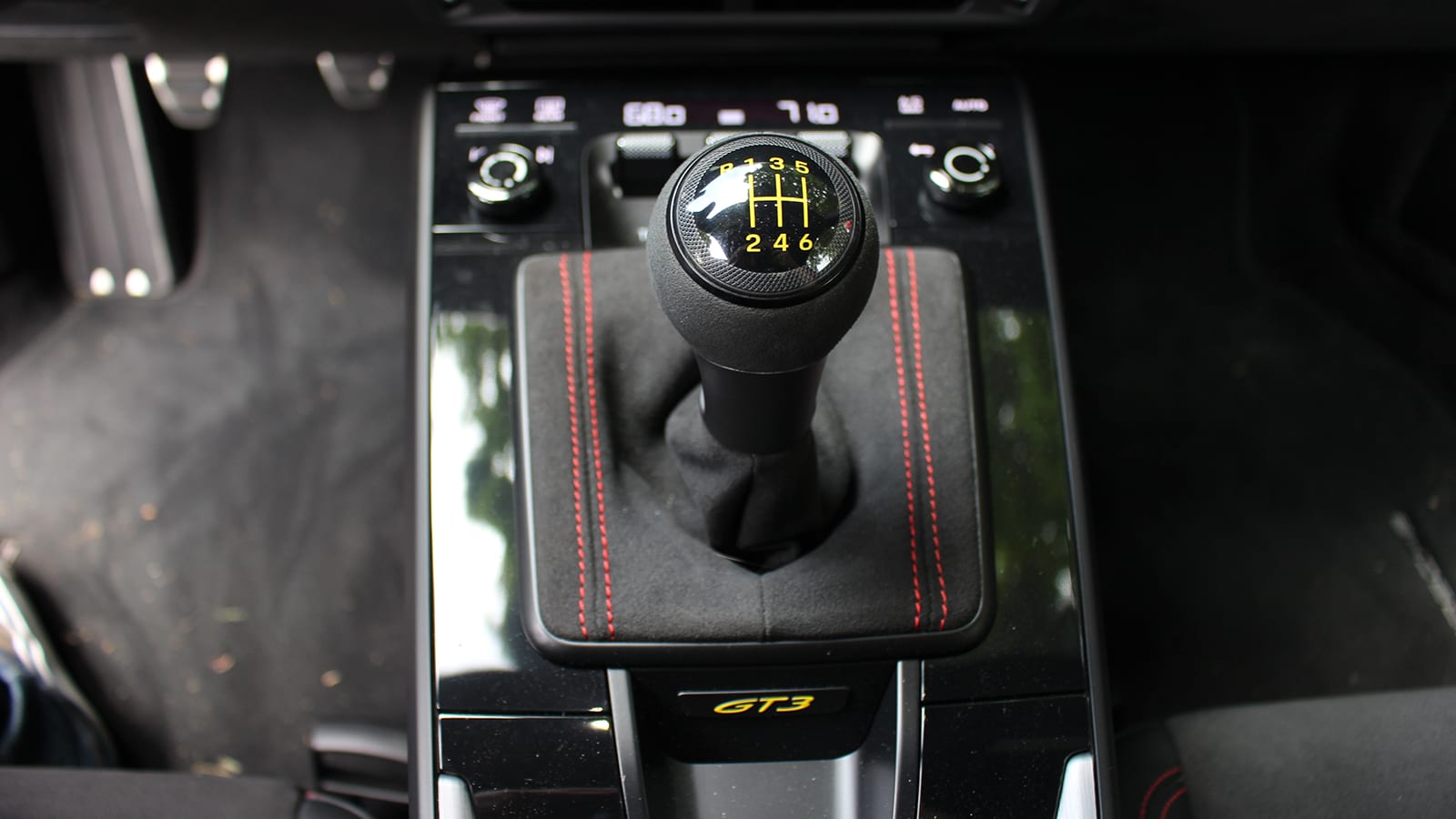 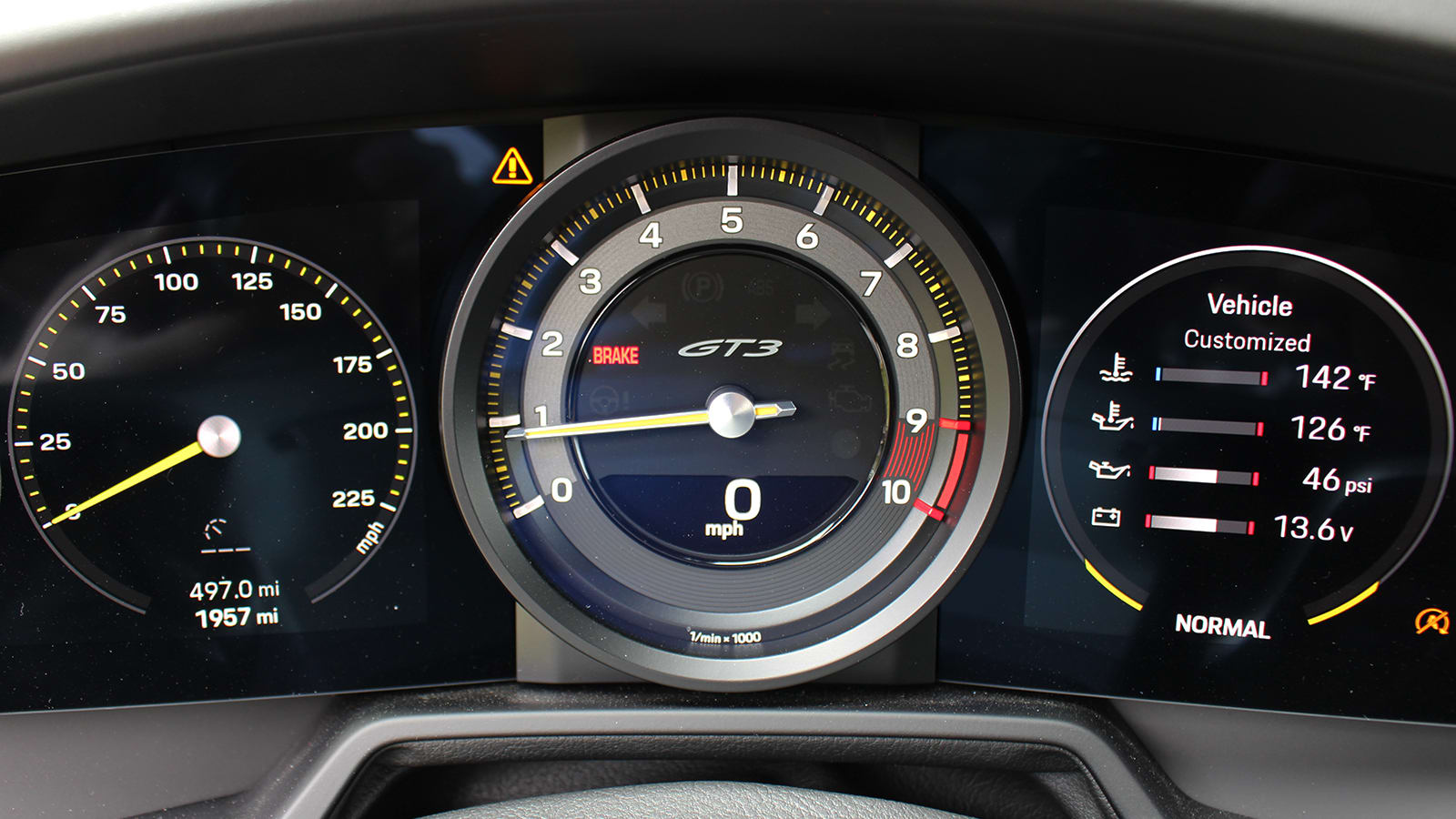 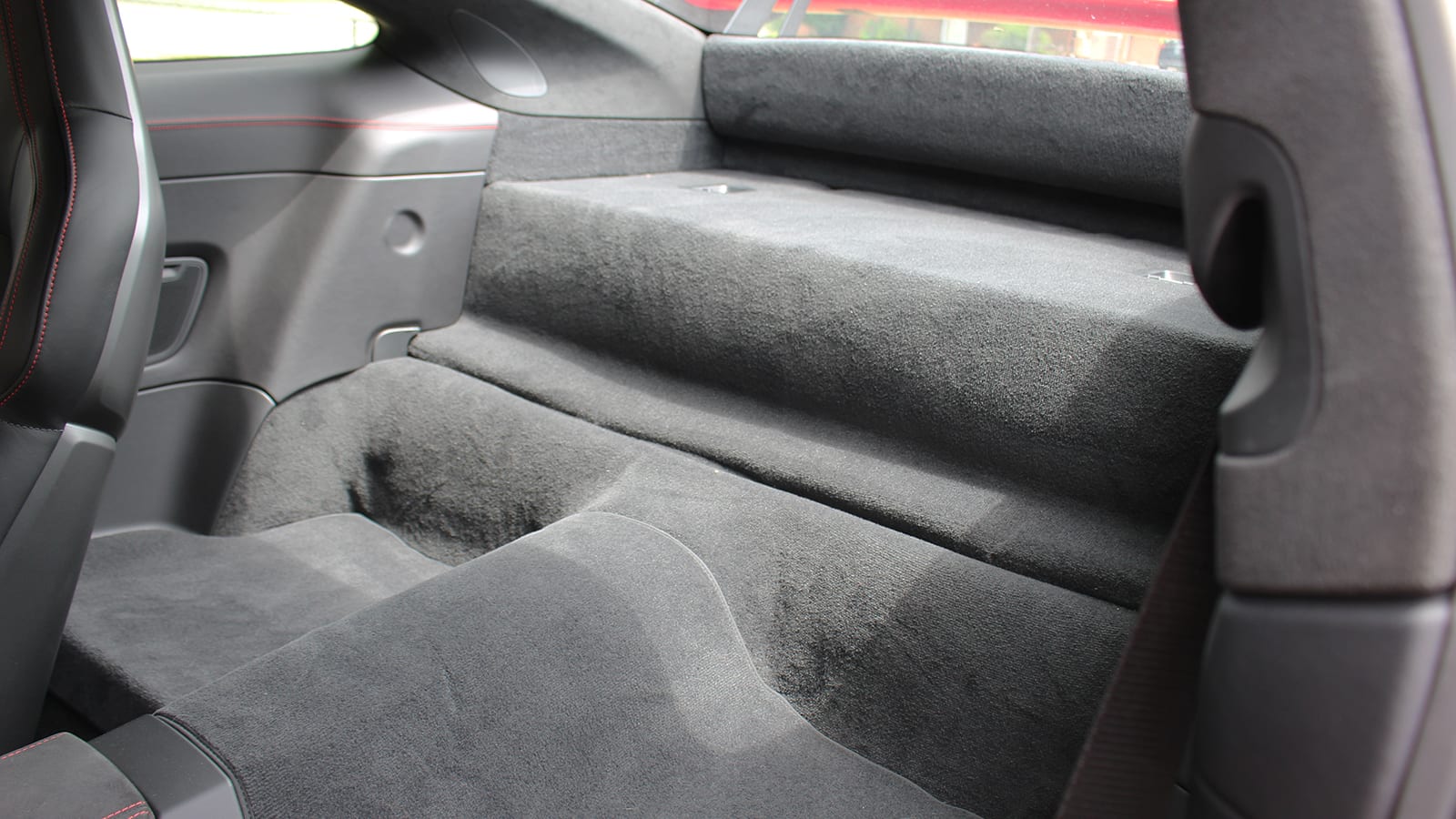 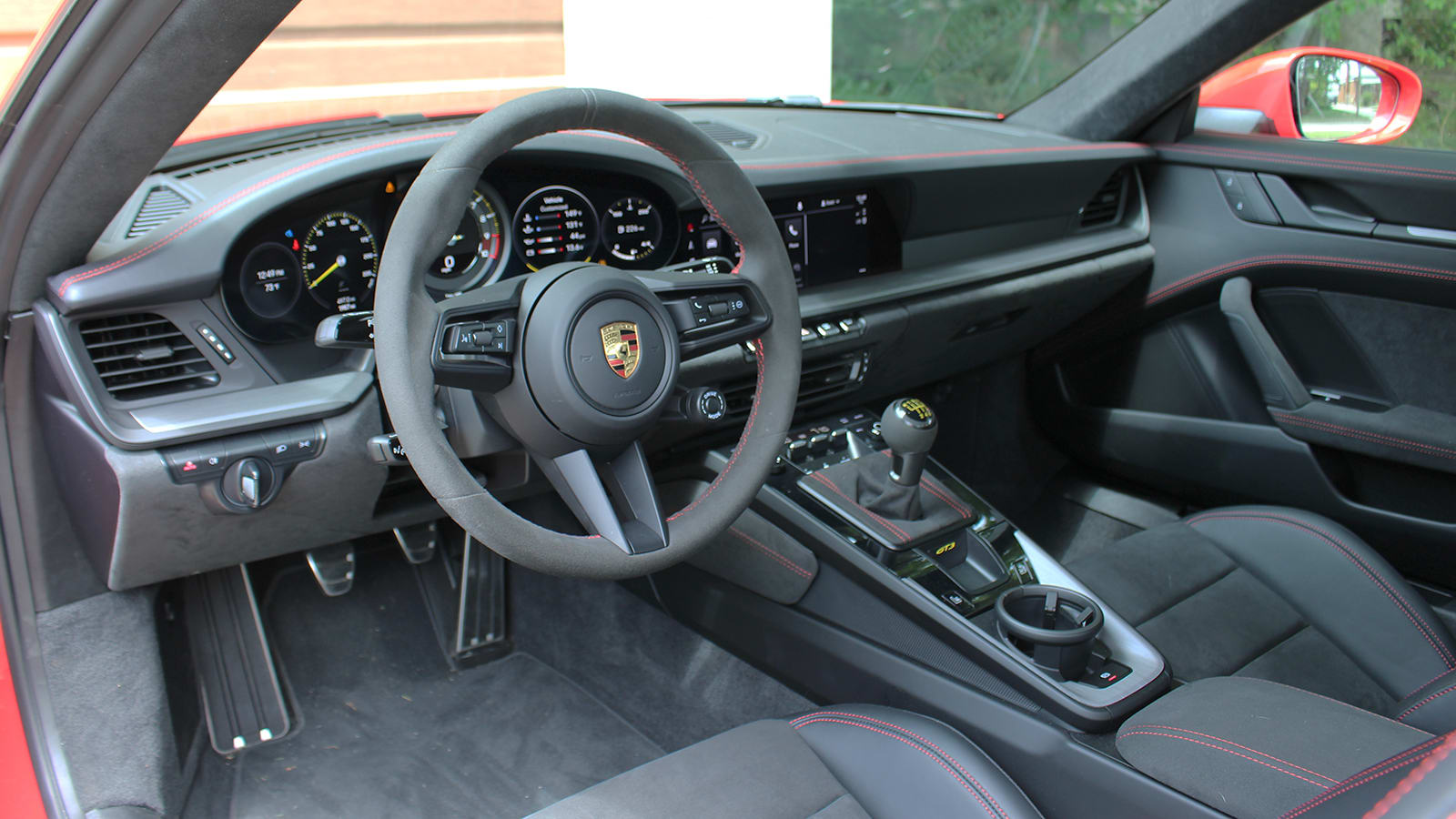 It’s when you look closer around the GT3’s interior that the specialness of this car begins to sink in. Number one on the list is the analog tachometer with its 9,000 rpm redline. Then there’s the lack of a rear seat, which is a big omission for a vehicle like the 911 that can double as a family car if said family is limited to two small kids, two small dogs or just two folks up front who routinely like chucking shopping bags in the back. And finally, there’s the yellow “GT3” badge that sits just south of the shifter that subtly reminds you this 911 costs more than most folks’ homes. It was $177,780 as tested, and yes, it would probably be more than that given the state of the car market, but even before today’s madness, GT3s were difficult to scoop up.

Twist the big key fob-like protrusion to the left of the steering wheel, and the 4.0-liter naturally aspirated flat-six with its new individual throttle bodies awakens with a smooth but violent stir. Tap down on the Sport Exhaust button, which you should do before every drive, and the octave being emitted from the stainless-steel exhaust drops a bit at idle. This driveway performance doesn’t venture into obnoxious territory, but the neighbors will definitely notice something special has been awakened next door. And if they have a keen ear, they won’t need to see it to know what kind of car it is – there’s nothing quite like the deep, thunderous clatter of a Porsche flat six.

Muscle the shifter left and up into reverse, and a pitiful backup camera pops up. Somehow, Porsche fit a potato cam to the 911 GT3, while all the other 911s get a high-res and eminently more useful backup camera. Perhaps Porsche saved a few grams of weight by using a worse camera? At least you can still get the front axle lift system to save the low front end from scraping. The memory lift control worked like a charm for every location I frequented, and it’s a perfect backup in case you forget to hit the button coming home late at night to your steep driveway. 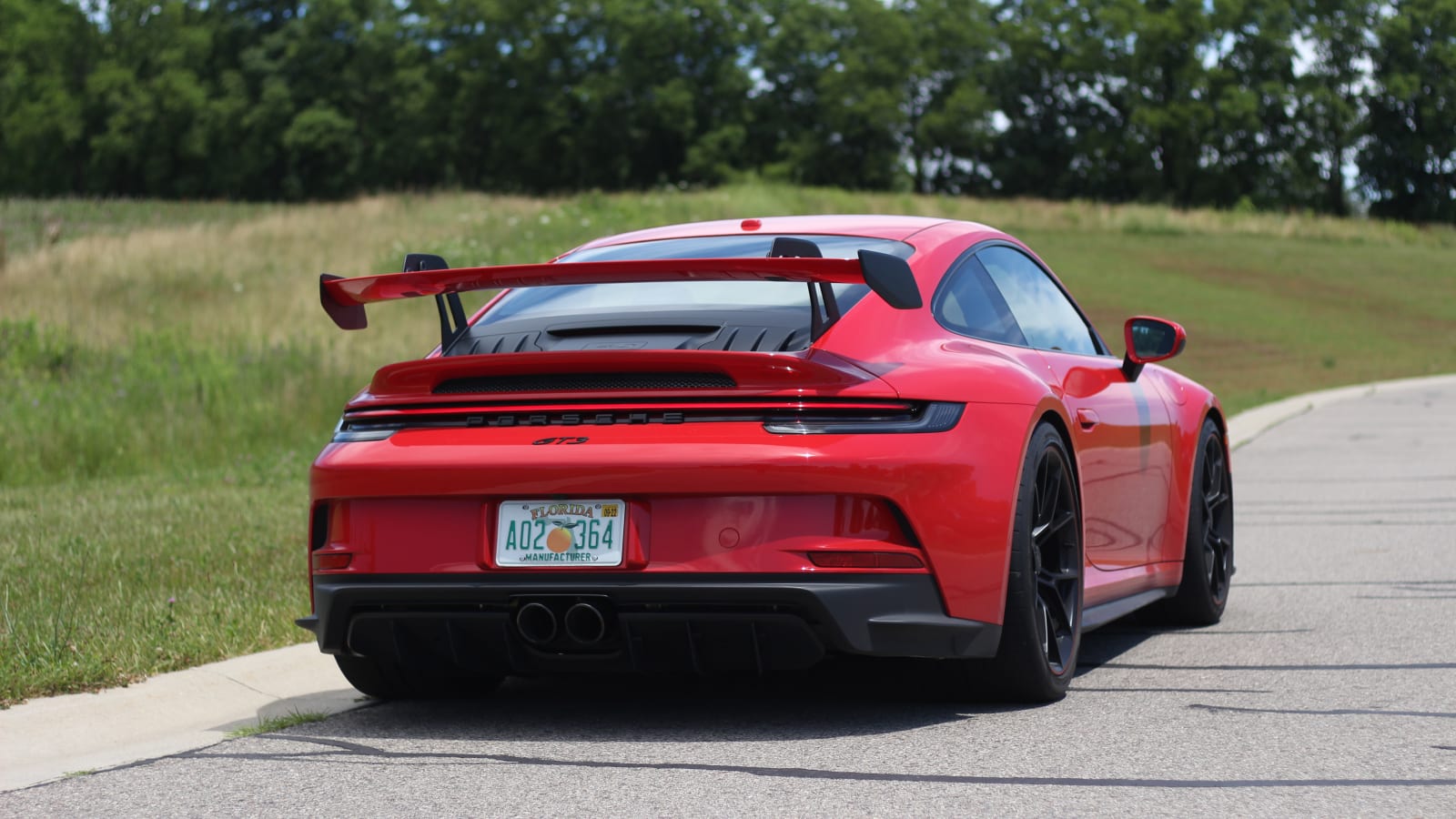 Making the left turn off my street and onto the main road is when the GT3-ness of this car really slaps me in the face. The front end darts to where I point it with an alacrity I wasn’t prepared for. As I trundle along uneven neighborhood streets, the rigidity of the chassis can be felt in every bump and pothole. Little rocks ping on the wheel wells thrown up by the GT3’s massive rubber.

I’ve always felt that particularly special cars reveal themselves and their potential in the first mile, and the GT3 fits this bill. The cabin is practically buzzing with sensations from all over. Each gear shift clicks into place swiftly and simply. The rise and fall of revs from the 502-horsepower flat-six is enticing and beckons for more at low speeds. Against logic, the electric power steering system is full of feel. That can admittedly be said of any 911, but only GT3 has a double-wishbone front suspension adapted from the Le Mans-winning 911 RSR, plus ball joints in place of various rubber suspension pieces. The result is a car that reacts to the road and communicates back unlike any other electric steering system I’ve used.

The harsh ride smooths out around cruising speeds above 40 mph, but the sense of oneness with the car and cohesiveness of the chassis never departs. Between the steering, rev band and noise coming from the rear, the GT3 starts to feel much less like its Carrera siblings, and more like its own beast entirely. 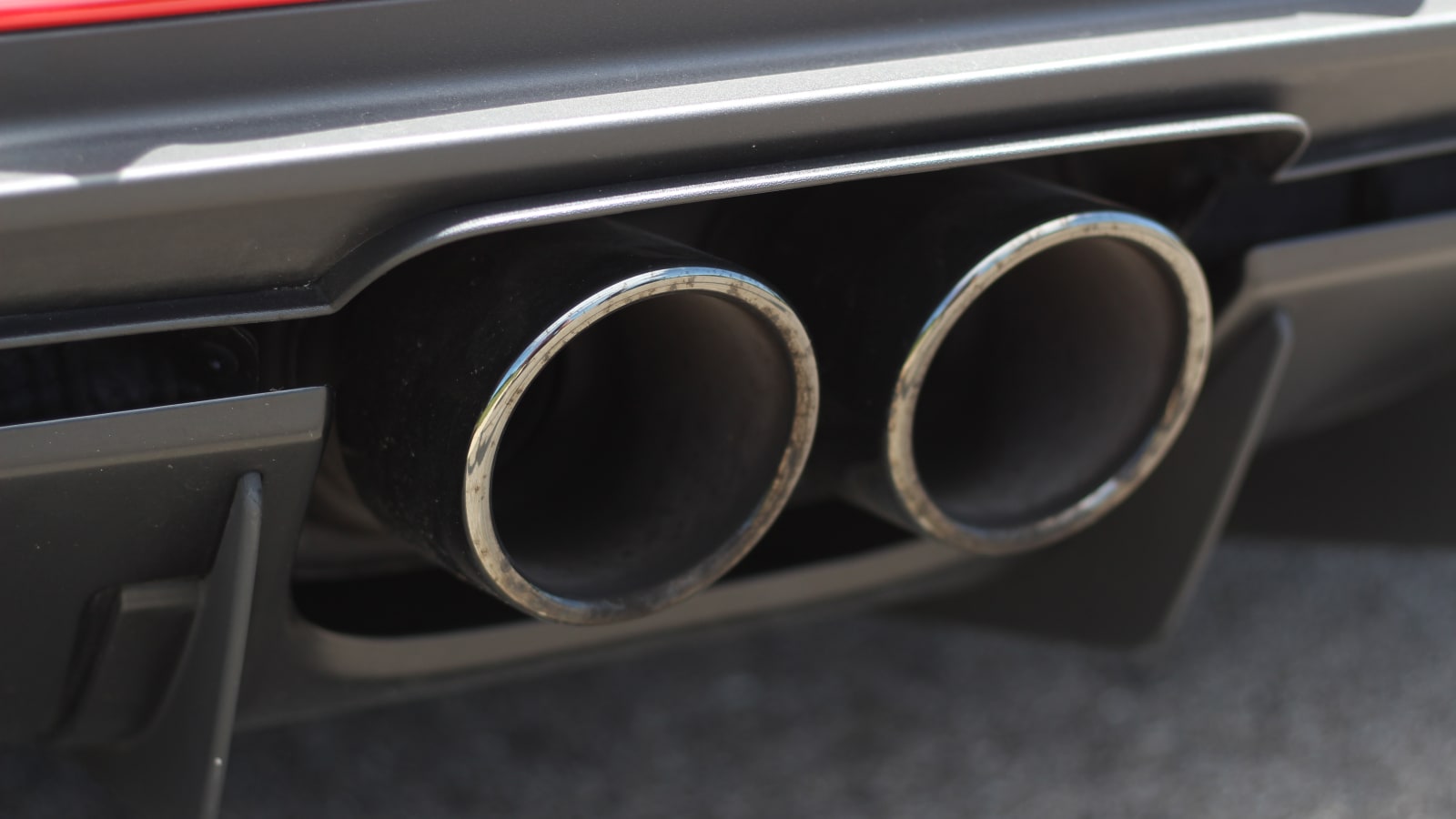 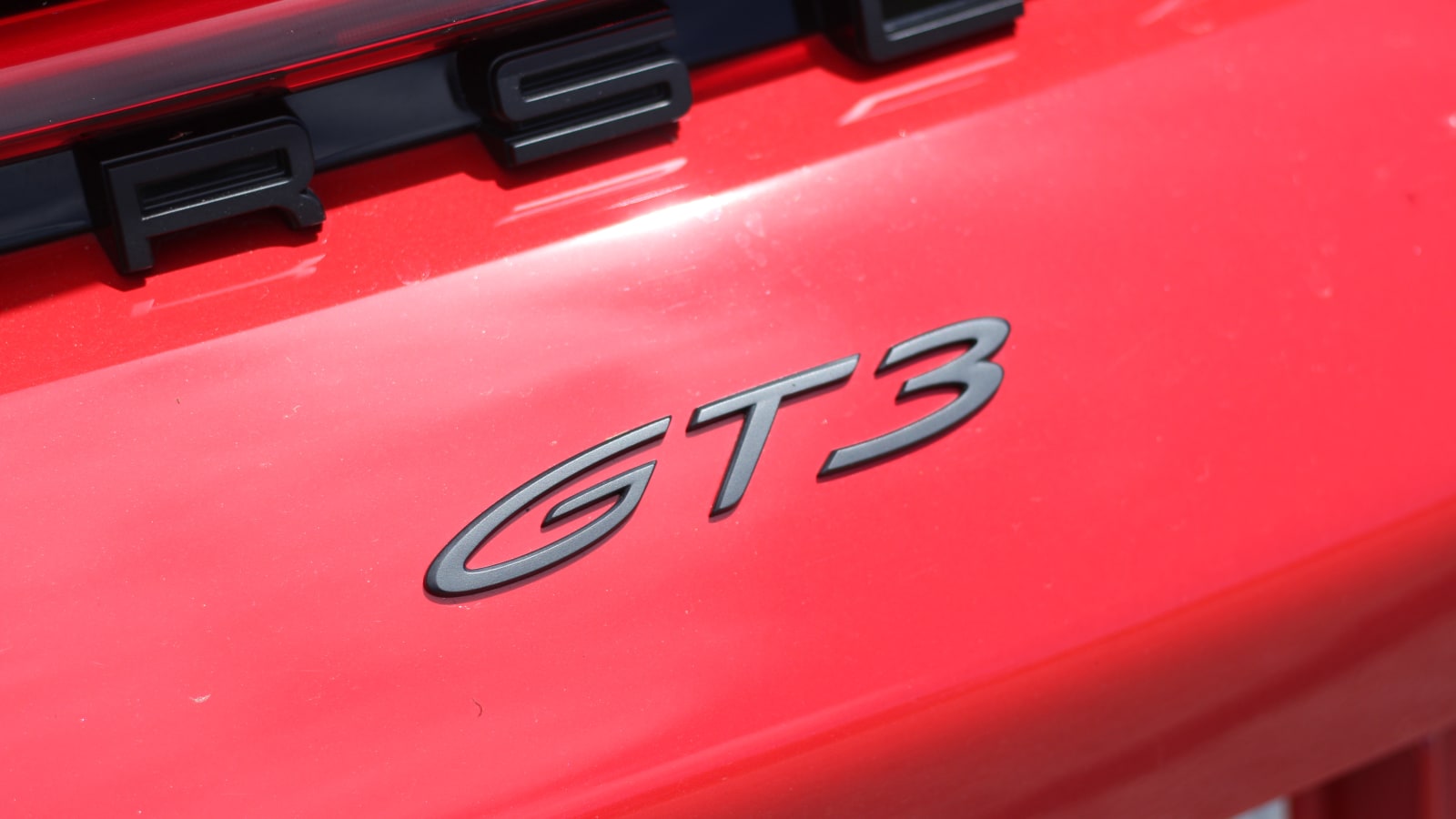 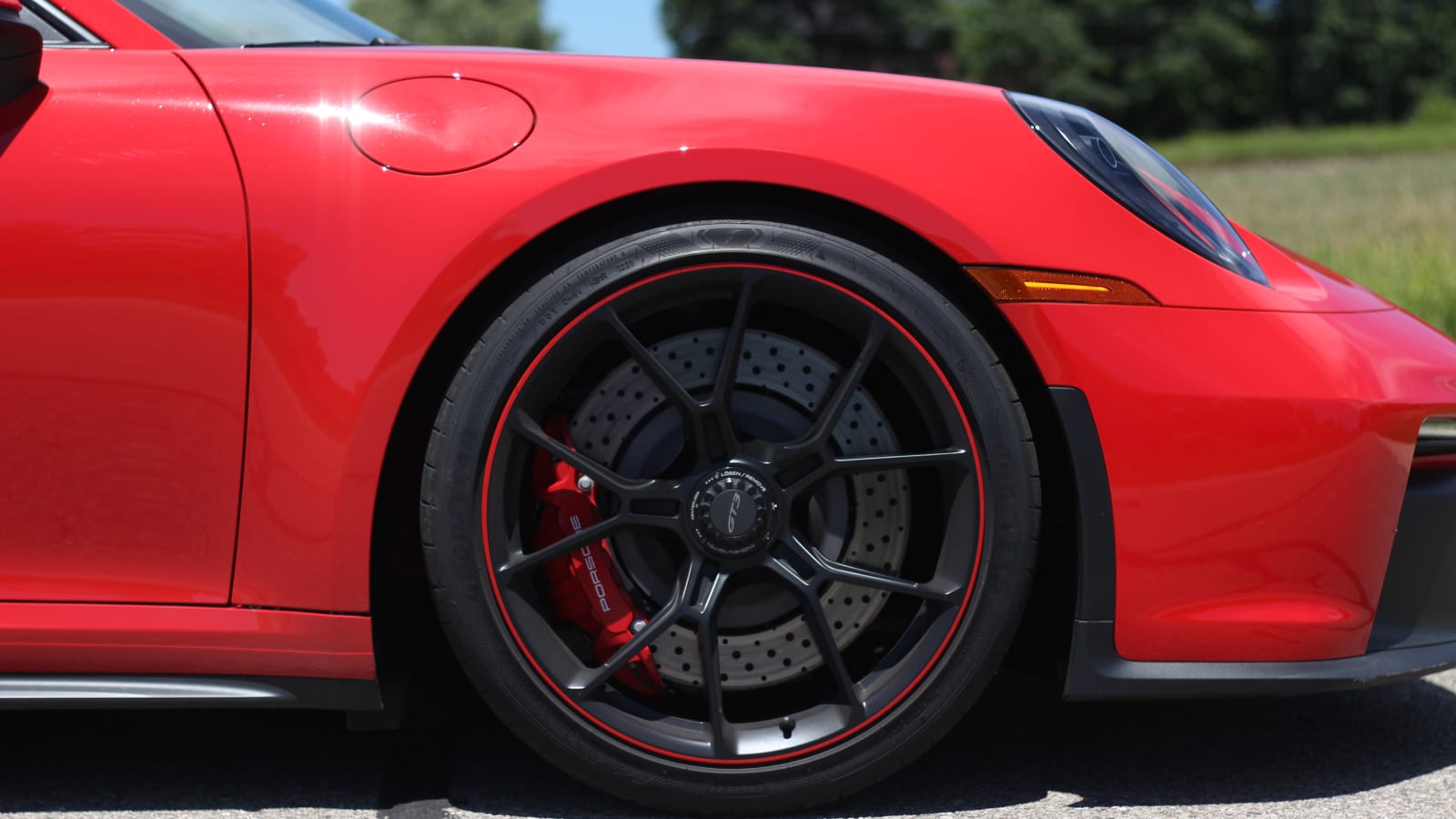 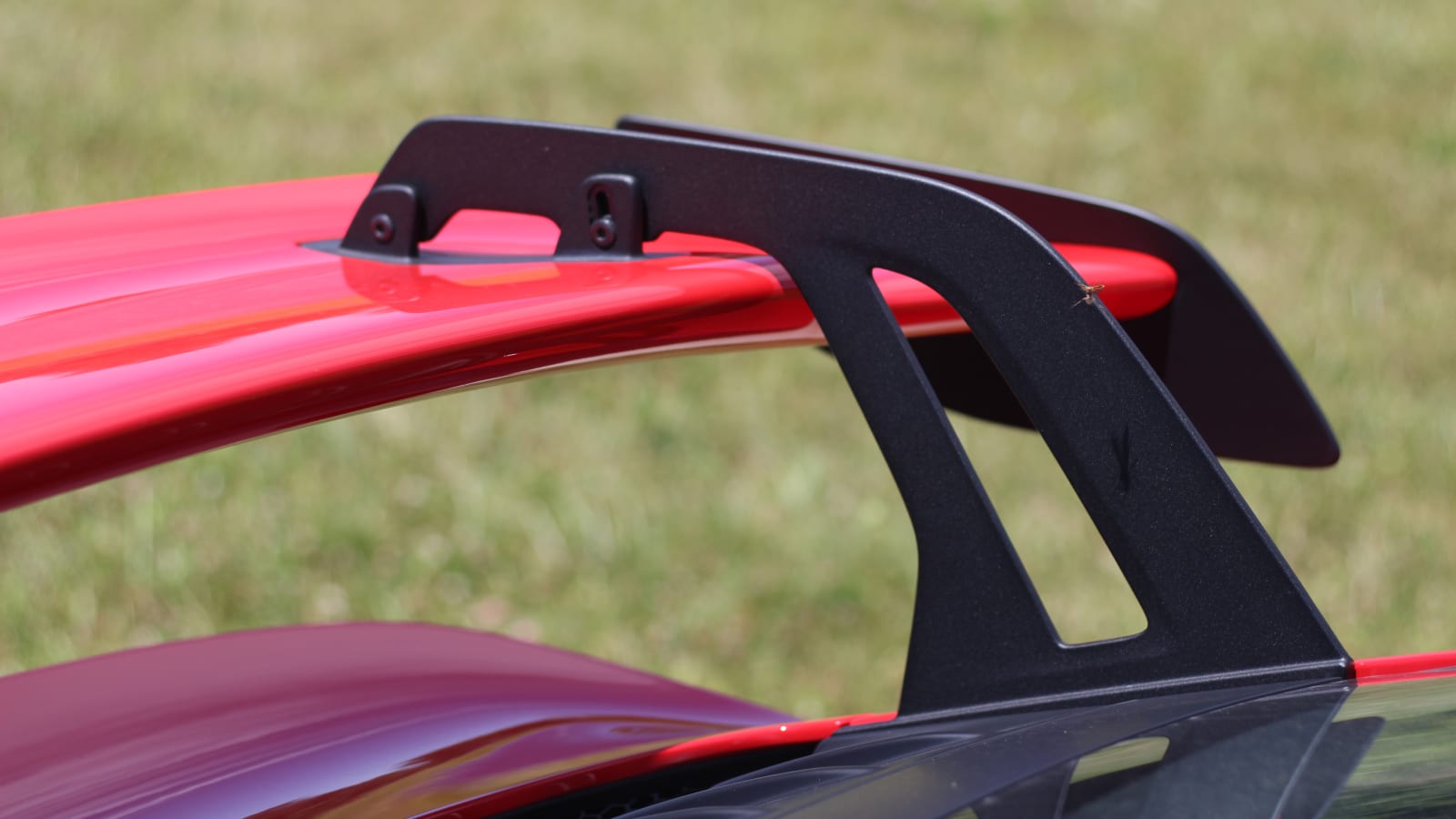 If you’ve never been behind the wheel of a GT3 before, there’s almost no way that you make it to the end of the tachometer the first time giving it the beans. Plenty of cars do the 0-60 mph sprint around the 3.0-second range these days, but very few do so with an engine that revs and builds power like this one. There’s a recalibration period the brain needs to go through as you wind past 7,000, 8,000 and then 8,500 rpm. The high-pitched symphonic yowl coming from behind you is telling you it’s time to shift. Your brain is really saying it’s time to shift. But you’re still rushing forward with a downright brutal sense of accelerative Gs.

I hated physics, but the best way to describe this engine is by utilizing it. Plenty of cars — namely turbocharged ones — will smack you off the line with a totalitarian rush of acceleration, and then continue along through a gear offering a similar amount of high G forces till it’s time to shift. However, the sense of increasing acceleration subsides, as your actual acceleration rate doesn’t feel like it’s constantly escalating. Meanwhile, the GT3’s accelerative force never seems to settle into a maximum. Until the next shift, that sense of acceleration — the force pushing your head back into the headrest — never has interest in slowing down as you gain speed. It’s simply spectacular.

Arcing the GT3 into a corner can be described with the same word: spectacular. The 992 generation of 911 is genuinely large and takes up a lot of room on the road, but the GT3 is remarkably light at just 3,126 pounds with this tester’s manual transmission. Add in the quick steering, and you can flick the GT3 through corners with the speed and confidence of a much smaller sports car. That double-wishbone front suspension design, and the endless list of other changes Porsche makes to the GT3 versus a Carrera, result in a very different 911 in the corners. You can swap the dampers between “Sport” and “Track” modes, but no street surface necessitates stepping up to Track. All four tires stay glued to the ground around corners as though you couldn’t break their contact if you tried, and while I feel like I’m driving briskly, the GT3’s limits can’t even be touched on the road. You need speed, beyond what our speed limits allow, to use that giant rear wing to compress the chassis into the pavement and truly exploit the car. 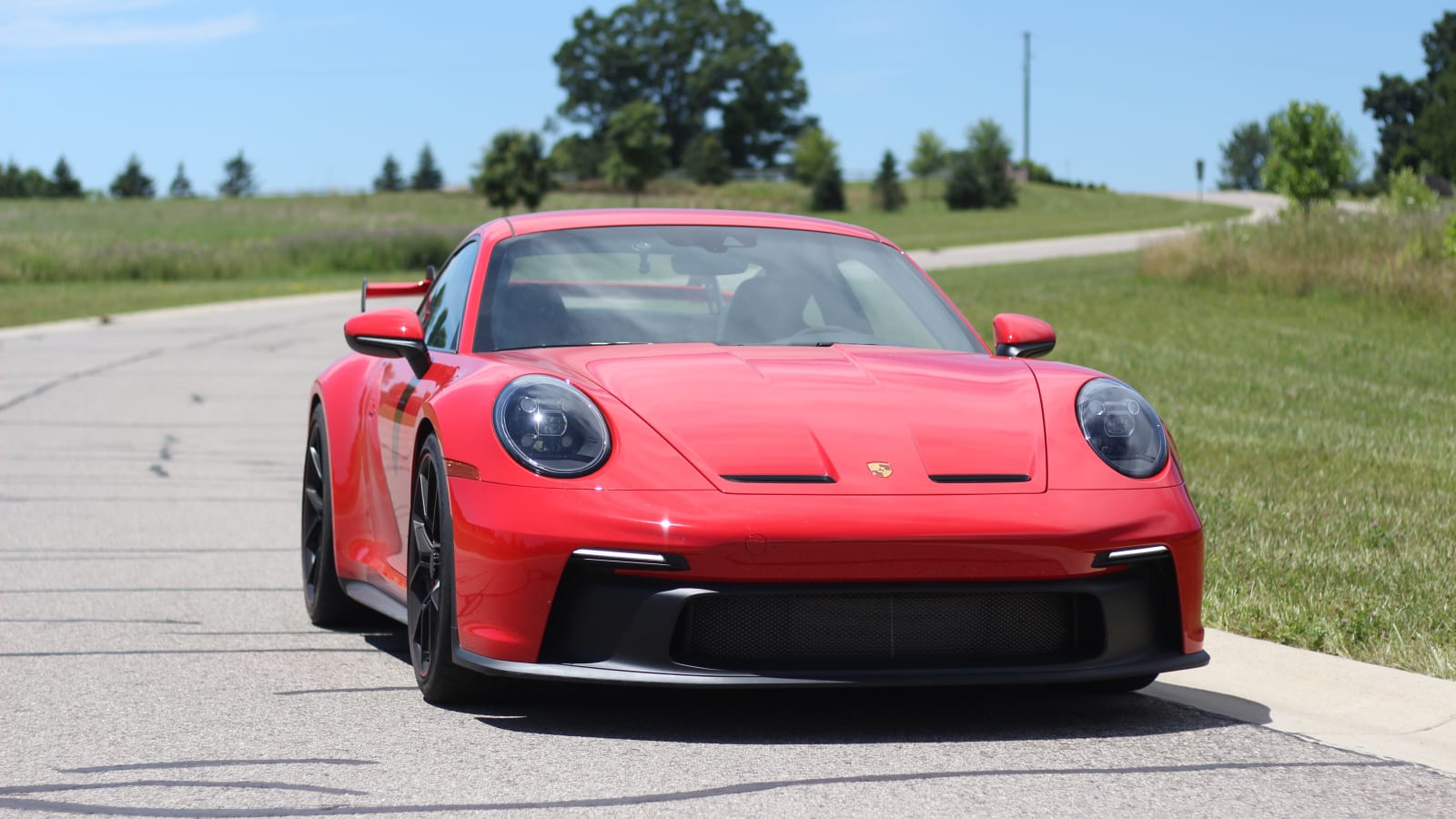 Even without a racetrack, though, the sheer sense of stability and agility afforded by this chassis is second to none. Every 911 grants you an unnatural amount of grip as you accelerate out of a corner, but the GT3 just makes it even better. The predictability of the engine’s torque, a dummy-proof rev-matching downshift feature, and this sophisticated and unflappable chassis make pushing the GT3 both easy and a nonstop joy. That is, so long as the roads are indeed roadworthy, which isn’t something Michigan is always adept at providing. Find yourself on some less ideal pavement, and the aggressive wheel/tire setup and alignment results in tramlining that you just can’t do anything about. It’s the only thing that’ll break a smile in the cockpit of this car.

Practically beaming from corner to corner with the revs never falling below 6,000 and 7,000 rpm, and that Formula 1-like wail echoing off the forest around you, is what the GT3 is all about. It’s a tall bottle of pure performance and another tall bottle of pure joy combined, and the result is a driving enthusiast’s cocktail of choice. And while you may not know it to be your cocktail of choice today, I can promise that one taste of GT3 will be all that’s needed to make it so.