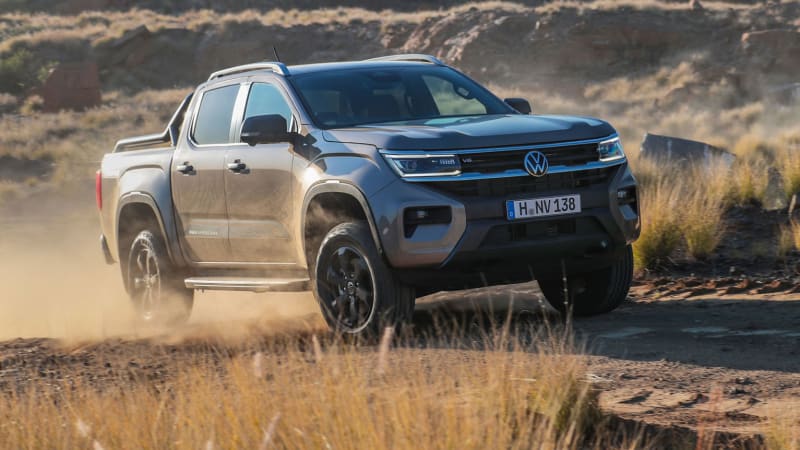 The 2022 Volkswagen Amarok has made its debut with a new look inside and out, a much longer list of available tech features, and a longer wheelbase that clears up more space in the cabin. Offered in numerous configurations, the truck will land in global showrooms in late 2022.

Volkswagen teamed up with Ford to design the second-generation truck. The new Amarok is closely related to the latest generation of the Ranger underneath the sheet metal, but the collaboration isn’t an exercise in badge-engineering. Visually, the Amarok adopts Volkswagen’s current design language. It’s characterized by a tall, upright front end, sharp-looking headlights with LED elements, and C-shaped rear lights. Keep in mind that the variant pictured in our gallery is an upmarket model; more basic (and basic-looking) trim levels will also be available.

At launch, buyers will be asked to choose between a two- and a four-door cab. Both body styles stretch nearly four inches longer than the corresponding original model (the longest variant measures 210.6 inches long, 75.1 inches wide, and 74.3 inches tall), and they ride on a wheelbase that has been extended by almost seven inches. This allowed designers to carve out a more spacious cabin. Adding more sheet metal to the wheelbase than to the overall length unlocks another important benefit: the new truck features shorter overhangs, which in turn increase the approach and departure angles to 29 and 21 degrees, respectively. Its water fording capability has been greatly improved as well. Volkswagen notes that the new Amarok can drive through about 31.5 inches of water, up from 19.6 in the last-generation truck.

More space isn’t the only noteworthy improvement inside. Customers in many markets — including Europe — are increasingly buying a pickup to use it as a daily driver, and they expect to find the same level of comfort and technology that’s offered in wagons and SUVs. To that end, the new Amarok comes standard with a digital instrument cluster and a portrait-oriented touchscreen for the infotainment system, and the list of options includes a Harman Kardon sound system. Adaptive cruise control is one of the 20-plus driving aids offered globally.

Globally, the engine palette includes four turbodiesel TDI engines and one turbocharged gasoline-powered unit; note that not all engines will be available in every market, however. On the turbodiesel side of the specification sheet, the entry-level unit is a 2.0-liter four-cylinder rated at 150 horsepower and 258 pound-feet of torque. This engine will primarily be available in Africa. Next up is a 170-horse evolution of this engine, followed by a twin-turbocharged 2.0-liter that develops about 204 horsepower. Finally, the range-topper is a twin-turbocharged, 3.0-liter V6 tuned to deliver up to 250 horsepower and a stout 442 pound-feet of torque. On the gasoline-burning side, the lone offering is a 2.3-liter turbocharged four-cylinder that develops 302 horsepower and 333 pound-feet of torque; this engine is shared with the Ranger.

Transmission options vary from market to market; they include 10-, eight-, and six-speed automatic units plus six- and five-speed manual gearboxes. Volkswagen’s 4Motion all-wheel-drive system comes standard in many markets, though here again the specifications aren’t as straightforward as they might initially sound. Some markets will get a part-time system while others will receive a permanent system.

In its most powerful configuration, the Amarok is capable of towing up to 7,716 pounds and hauling up to 2,557 pounds — that’s more than the base Ford F-150 Lightning. Its 21-gallon fuel tank should give it an excellent driving range, though fuel economy figures aren’t available.

Built in South Africa, the new Volkswagen Amarok will begin arriving on dealer lots in Europe and in several other regions before the end of 2022. Pricing information hasn’t been announced yet but it’s of little interest to us — nothing suggests that the truck will be sold in the United States. Volkswagen has occasionally toyed around with the idea of returning to the pickup market here, but we likely won’t see the Amarok.