Eight years after the model was revived, the 2023 Chevy Colorado marks a whole new generation for the midsize pickup truck. It’s fully redesigned with a number of big changes; one of the biggest being the switch to turbocharged four-cylinder engines. But along with the changes are a lot of the good things from the previous generation, including the ultra-off-road-ready ZR2 trim level.

We’ll start with the new engines. The old V6 and naturally aspirated four-cylinder choices are gone. Instead, every Colorado gets a turbocharged 2.7-liter turbocharged four-cylinder. But it’s offered in three varieties. The base engine makes 237 horsepower and 259 pound-feet of torque. Then there are two 310-horsepower options. This particular engine is mechanically the same as what comes in the bigger Silverado (the low-output one loses some features such as oil piston squirters). The regular version of this engine makes 390 pound-feet of torque, and the high-output version makes 430 pound-feet of torque. All of these engines are paired with a new version of GM’s eight-speed automatic transmission and either two-wheel for four-wheel drive.

Also missing from the powertrain lineup is the diesel. There don’t seem to be any plans for the diesel at the moment, and when asked, Chevy representatives noted that the turbo gas engine does a good job of delivering diesel-like torque and improved fuel economy over the old gas engines, thus making the diesel less necessary. Unfortunately, fuel economy numbers haven’t been released for the new gas engines, but they should be revealed soon. Chevy did share towing numbers, and maximum towing has increased from 7,000 pounds to 7,700 pounds. The base engine maxes out at 3,500 pounds.

These new engines are packed into a new body sitting on a new frame, though with some design similarities to the old one. And it gets just one new body. The new Colorado is only available with the crew cab and short bed, losing the long-bed option and the extended cab variations. Compared to the equivalent outgoing Colorado, the new truck is nearly the same size at just 0.3 inch longer overall, and it has the same bed length as before. But the wheelbase has been stretched by 3.1 inches, mainly by moving the front axle forward and reducing the front overhang. According to Chevrolet, this helps with approach angle and allows for bigger tires. As for the looks, the new truck looks much more crisp and aggressive with more creases around the body. The nose looks taller and longer, too. Suspension design is the same basic design as before with a coil-sprung independent front and leaf-sprung solid rear. And with the ZR2, you get the magical Multimatic spool-valve shocks, which have been changed to outboard mounts to better protect them off-road.

On the topic of suspension and off-road capability, the standard Colorado features 7.9 inches of ground clearance. Moving up to the Z71 increases ground clearance to 8.9 inches. The new Trail Boss climbs to 9.5 inches, and the ZR2 goes farther to 10.7 inches. 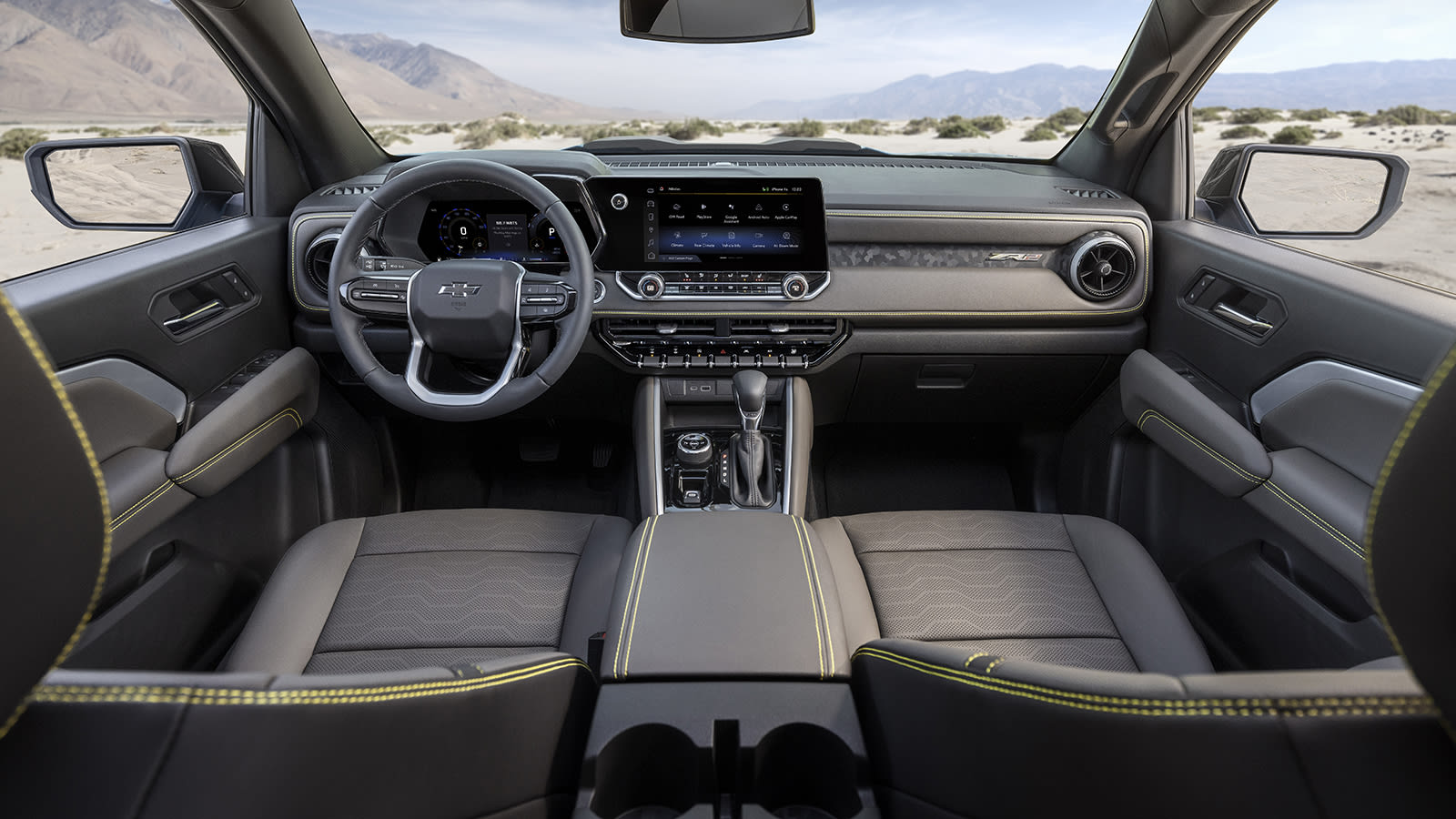 Inside, the Colorado is similarly redesigned, and this may be the most welcome upgrade for the pickup. Immediately noticeable is the big touchscreen infotainment display. It’s an 11.3-inch unit found in other new GM products, and it’s standard on every trim level. Also standard is an 8-inch digital instrument cluster. These screens are mounted to a clean, squared-off dashboard with nicely integrated vents. We’re also pleased to see a large array of physical switches, buttons and knobs for common functions. A factory sunroof is now finally available for the Colorado as well. The bed is fairly conventional, but it gets an interesting available addition. The tailgate can be optioned with a storage compartment that’s 45 inches wide and 4 inches deep. Many cameras are available for help maneuvering and towing, and the Z71 and ZR2 models can be had with a new under-vehicle camera.

Familiar Colorado trims return including the base WT (Work Truck), LT, Z71 and ZR2, but two new variations are now offered. There’s a Trail Boss model, sliding between the Z71 and ZR2. As alluded to earlier, it gets a bigger suspension lift than the Z71, but it also comes with 18-inch wheels, 33-inch all-terrain tires, and a plain, rugged black plastic front bumper. The ZR2 also gets a special model in the ZR2 Desert Boss. This truck gets the usual ZR2 goodies such as the large suspension lift, Multimatic shocks, front and rear locking differentials, skid plates and high-clearance bumpers, but it adds a number of other features, too. It gets a tweaked front fascia, a sport bar, off-road lights, 33-inch tires on 17-inch beadlock-capable wheels and black badging.

Pricing has not yet been announced for the new Colorado, but expect it to be announced in the coming months along with fuel economy specs. The pickup goes on sale early next year.