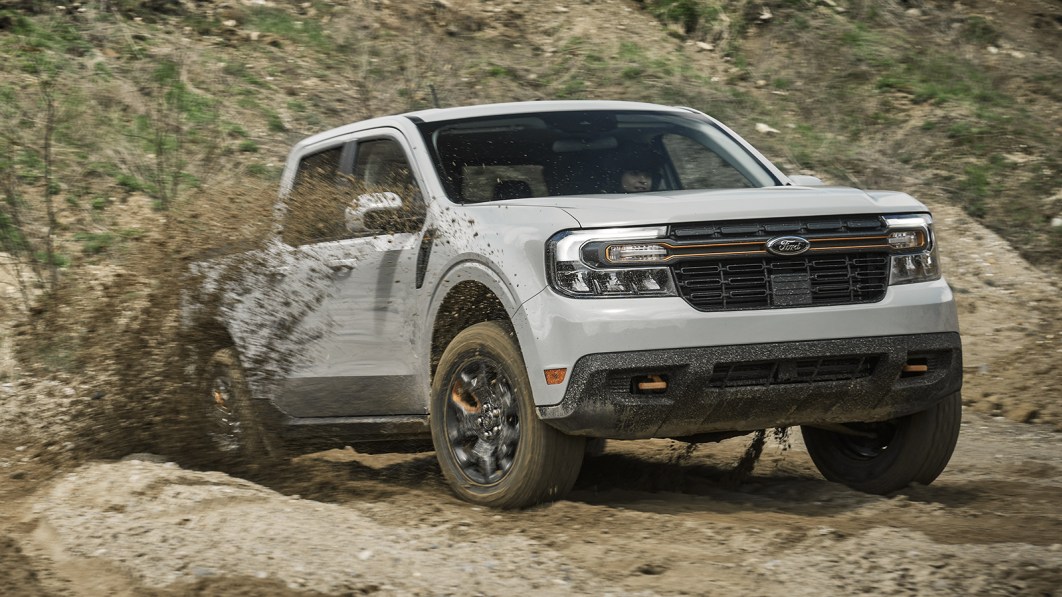 Ford has created beefier off-road variants of pretty much all its trucks, and even a number of its SUVs and crossovers. So it’s not a big surprise that the 2023 Ford Maverick is getting its own version. It’s named Tremor, in keeping with the theme set by the F-150 and Ranger for something that’s more off-road ready than an FX4, but not all the way to Raptor levels, which suits this little truck.

The package is only available on XLT and Lariat trim levels, and only with the turbocharged 2.0-liter four-cylinder, since that’s the only all-wheel-drive model. Visually, it gets black badges, smoked lights, orange tow hooks and black and orange wheels. An optional appearance package adds a gray roof and mirrors and black graphics on the hood and sides. Inside the truck gets black upholstery with orange stitching and accents, plus stitched-in Tremor logos.

But the Tremor gets real off-road improvements, too. The upgrades start with a suspension lift that raises the truck close to an inch with new springs and shocks tuned for off-road use. The front bumper has been redesigned for better clearance and better approach angle, too. And the truck now sits on 17-inch alloy wheels with all-terrain tires. Overall ground clearance has increased from 8.6 inches to 9.4. The approach angle goes from 21.6 to 30.7 degrees, breakover from 18.1 to 19.9 and departure from 21.2 to 22.2.

The engine with its 250 horsepower and 277 pound-feet of torque is unchanged, but there are some other major driveline upgrades. The transmission gets an upgraded oil cooler, stronger half-shafts are used, and the twin-clutch rear differential similar to the Bronco Sport Badlands‘ unit is fitted. This differential can lock itself for extra traction, or it can send torque to either rear wheel. Ford says it can send all the torque going to the rear to just a single wheel. These mechanical upgrades are supplemented by electronic assists, too. The truck gets drive modes for pavement, mud, sand, snow and towing. It also gets Ford’s Trail Control off-road cruise control system.

Pricing hasn’t been announced for the Tremor yet, but expect it to start a little more than an EcoBoost XLT FX4, which currently starts at a little over $28,000. Production begins for the truck this fall, and Ford will start taking orders on August 2.