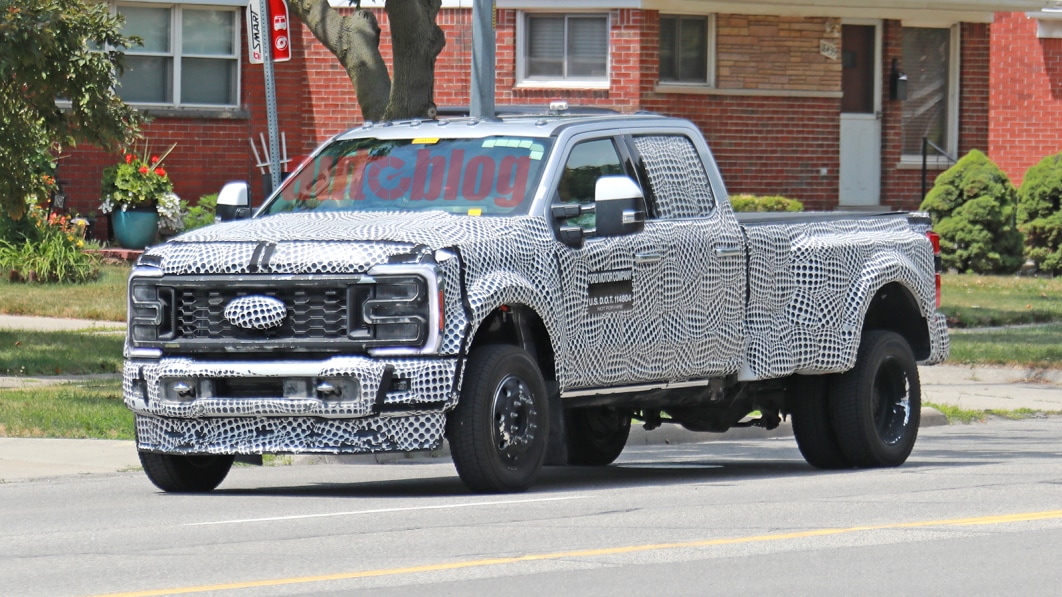 We just recently saw spy photos of a version of the 2023 Ford F-Series Super Duty pickup truck. They revealed a new feature and the revised fascia with giant headlights. It was clearly a lower trim model, though, with halogen lights and a relatively simple grille. In these latest spy photos, we see a much higher trim model with a far fancier front fascia.

It’s not completely clear what trim this Super Duty is, but the spy photographer suggested it may be a King Ranch due to the design of the fascia. It certainly seems possible. There are wavy parts of the grille trim that go over the headlights on either side that do look like the King Ranch brand.

This model also features LED headlights with a bright running lamp bracket that highlights how large the lights have become. They do neatly bookend the grille. And going back to the grille for just a moment, this design features additional detailing besides the wavy ends. It has a couple of vertical openings that flank a detailed mesh.

Interestingly, this dually truck features an extremely large air dam under the front bumper. It’s even larger than the one on the low-trim model we saw earlier. We’re not positive why it’s different, but this dually does appear to have a taller front ride height, so it may be to make up for it. Perhaps it’s a difference of four-wheel- and two-wheel-drive models. Also notable is the lack of the fender steps from the non-dually.

We’re expecting the new Super Duty to be revealed in just a couple of months. The previous truck we saw specifically noted it was a 2023 model, so should appear with the new model year.