ANN ARBOR, Mich. — The Genesis GV60 rounds out a trio of new, state-of-the-art electric cars from the Hyundai family. It follows the excellent Hyundai Ioniq 5 and also-excellent Kia EV6, and is built on the same electric platform (called E-GMP) with the same 800-volt battery architecture. The GV60, the first of two new electric vehicles from the Genesis luxury brand (the Electrified G80 being the other), aims to set itself apart from its cousins in design, performance and level of luxury.

It certainly looks different than the others, though its lines are closer to the sleek but still sharp EV6 than the creased, futuristic aesthetic of the Ioniq 5. Like the EV6, it boasts athletic proportions, with the wheels pushed far out to the corners. With a wheelbase of 114.2 inches, the GV60 is identical in footprint to the Kia EV6 and smaller between the axles than the Ioniq 5. At 177.8 inches in overall length, however, the Genesis is shorter than both. The GV60 stands at 62.4 inches in height, which is in between its siblings, and like the taller Ioniq 5, seems even loftier until you’re standing right next to it.

Inside, the GV60 is a place of tasteful luxury, putting design and tech at the forefront. The first thing you’ll probably notice after climbing inside is the glass orb on the center console. When you start the car, this sphere flips upside-down to reveal a rotary gear selector. It’s a feature made for Instagram and TikTok. The interior materials appear to be of a higher quality than the Hyundai and Kia, and the overall ambience feels more like traditional luxury than the Ioniq 5’s minimalist modern atmosphere or the EV6’s sporty cabin. In other words, it’s a proper Genesis. The compromise here is that the Genesis GV60’s rear legroom is outdone by both the Hyundai and Kia. Cargo volume, at 24 cubic feet behind the second row, is almost identical to that of the Kia EV6, but less than the Ioniq 5’s 27.7 cubic feet (though as we’ve seen in the Ioniq and EV6 luggage tests, the specs may not equate to real world usefulness).

Like its cousins, the GV60 uses a pair of digital screens for the infotainment system and instrument panel. These are easy to use and quick to respond, but the GV60 puts an emphasis on its hard-button controls, which means less digging through menus to fiddle with settings. There are a number of hard buttons on the steering wheel and center stack that you can program as shortcuts to various menus or vehicle features as well (like Quiet mode, phone projection or turning the display on or off), plus a redundant rotary knob controller like in the GV70 and 2023 Electrified G80. There’s also a head-up display that provides you with useful information like speed, navigation instructions and blind-spot info without having to take your eyes off the road. 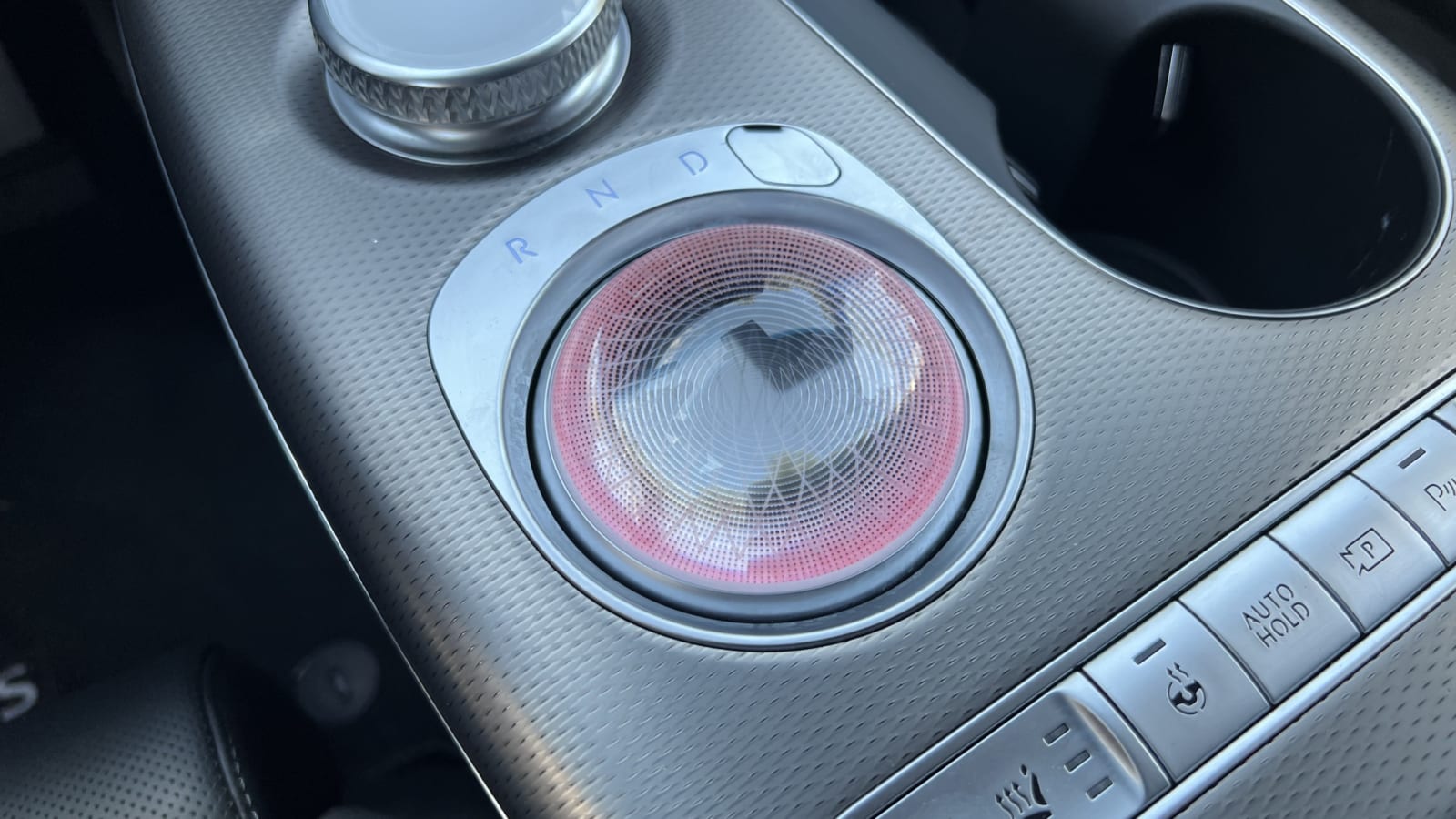 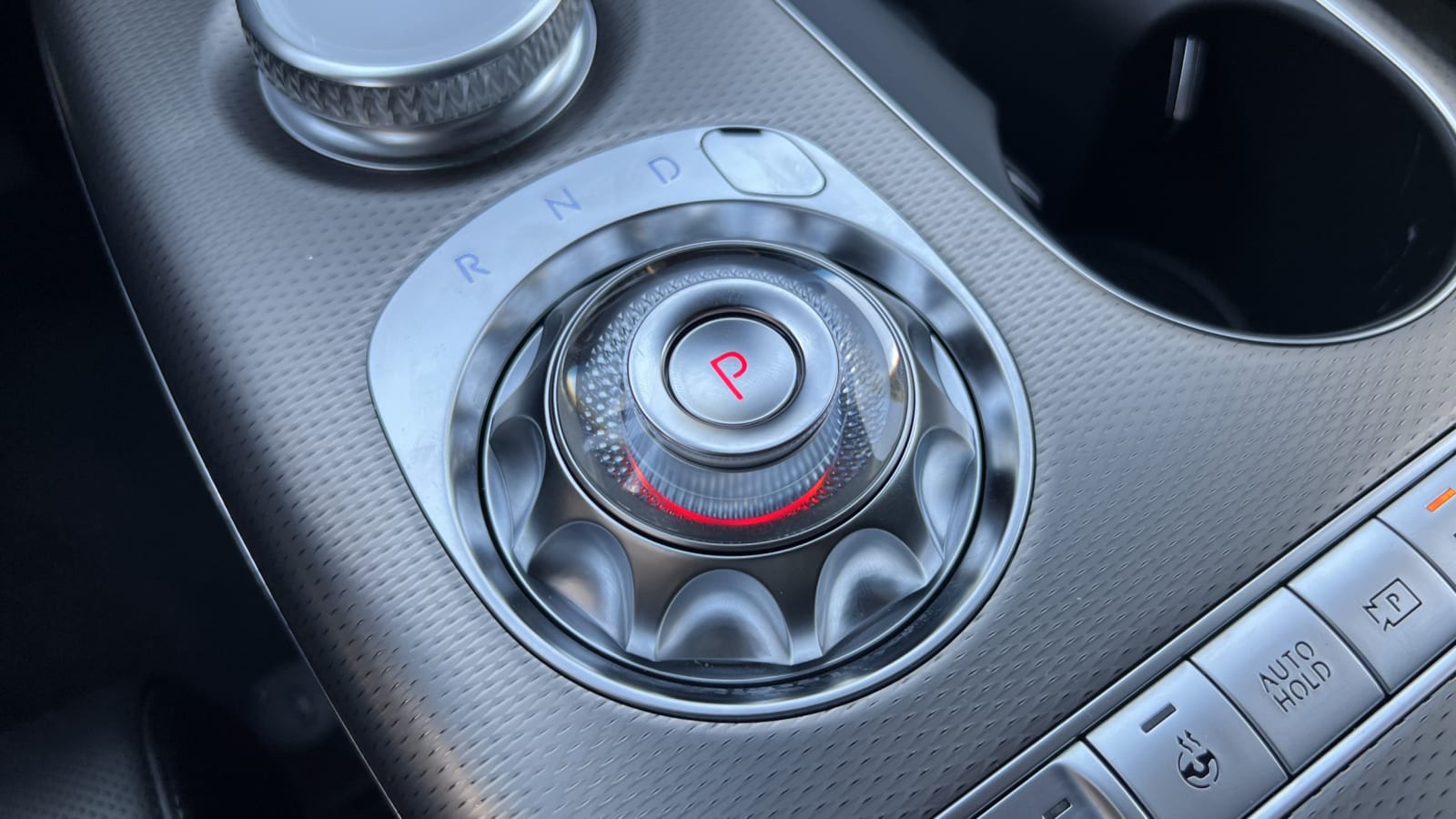 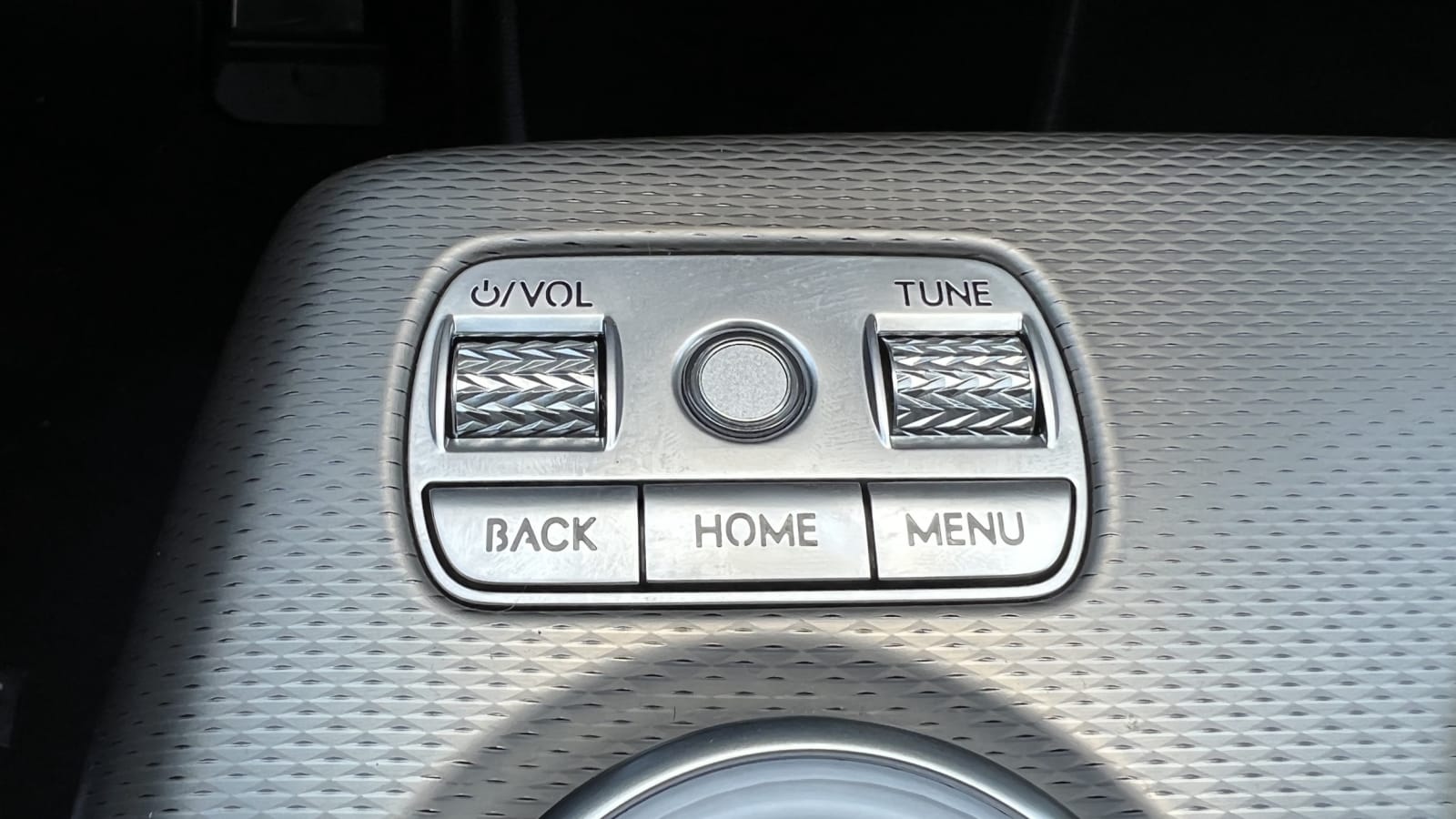 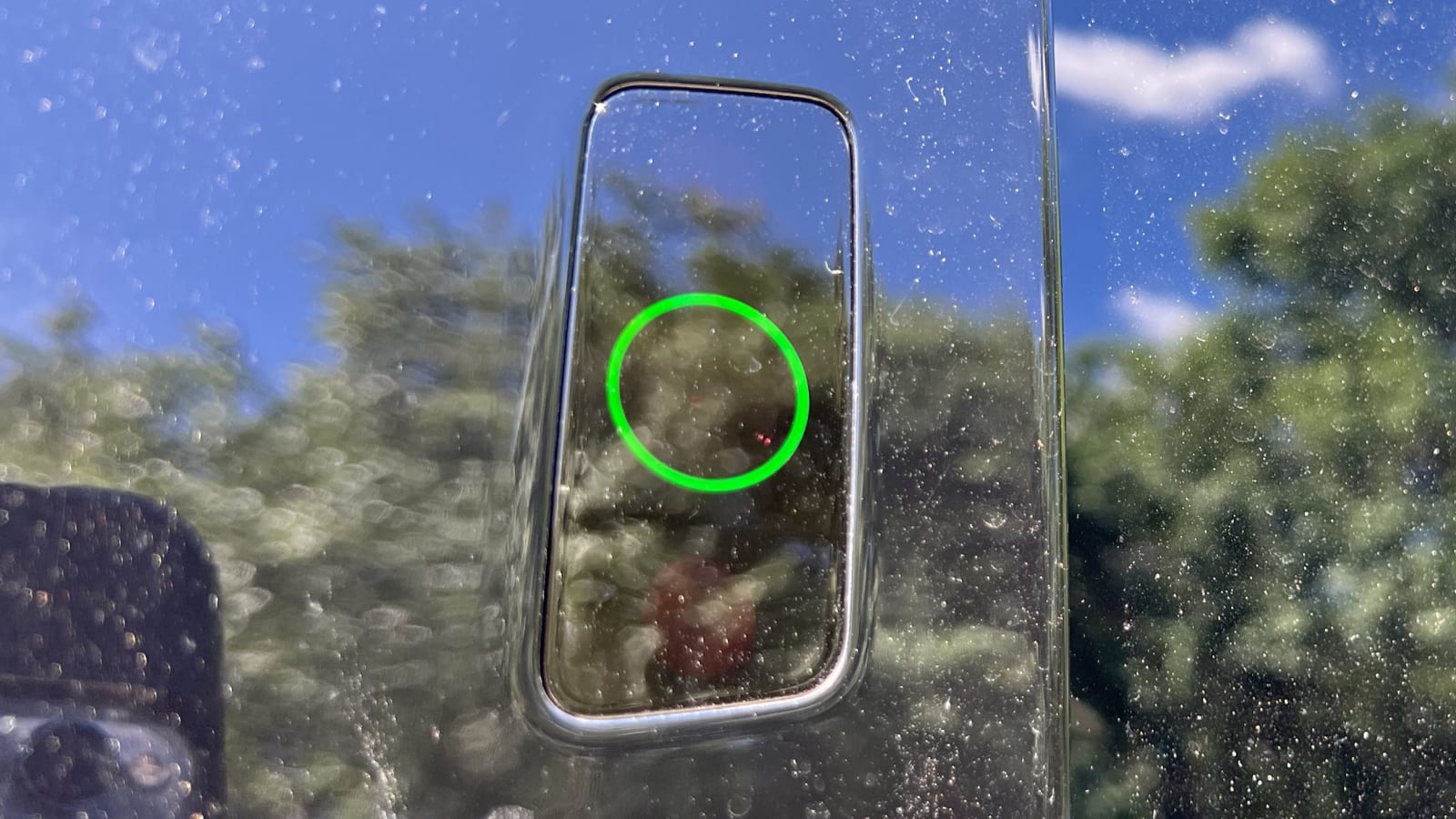 When you drive a car for the first time, it’s not unusual to say “you’re getting to know it.” With the GV60, the car gets to know you thanks to its fingerprint and facial recognition. Setting them up were fairly simple processes. Messages on the screen prompted me to use the little button-like circle at the fore end of the floating center console to scan different parts of my finger — sides, tip, center — until it had a full print. Then, for facial recognition, it instructed me to step out of the car and look directly into an illuminated circle in the B pillar until it turned green. Done. Now I could unlock the car with a glance, and start it with a touch. At least theoretically. I wasn’t ready to tempt fate by leaving the keys behind as my first outing in the GV60 was to be a highway trip to Detroit for a concert, and I didn’t care to risk a logistics nightmare near midnight.

With an especially motion-sickness-prone date riding shotgun, we left Ann Arbor and headed toward Detroit. As tempting as the “Boost” button on the steering wheel was (more on that later), acceleration and handling would be tested another day. The ride, however, was up to the task of keeping the evening free from emesis. In Comfort mode, the GV60 rides smoothly and quietly, thanks to its adaptive suspension — MacPherson struts up front, five-link in the rear. Pulling from the Genesis bag of tricks, the GV60’s Preview Electronic Control Suspension feature further improves things by using the front camera and navigation system to assess road surface conditions and recognize things like speed bumps to control the damping. The Mercedes-Benz EQS is one of the few other cars on the road with similar technology, which is saying something for this much cheaper Genesis. 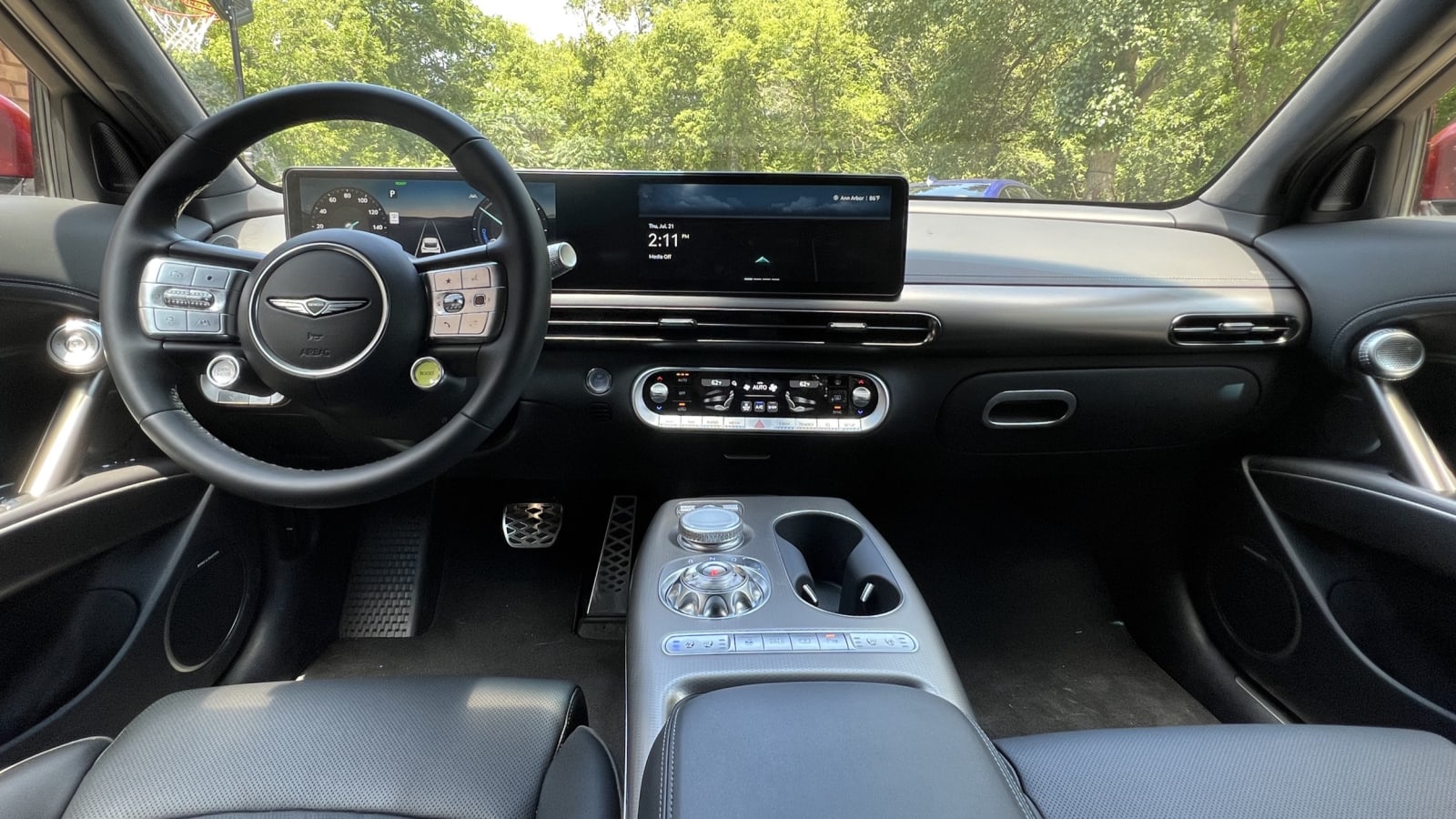 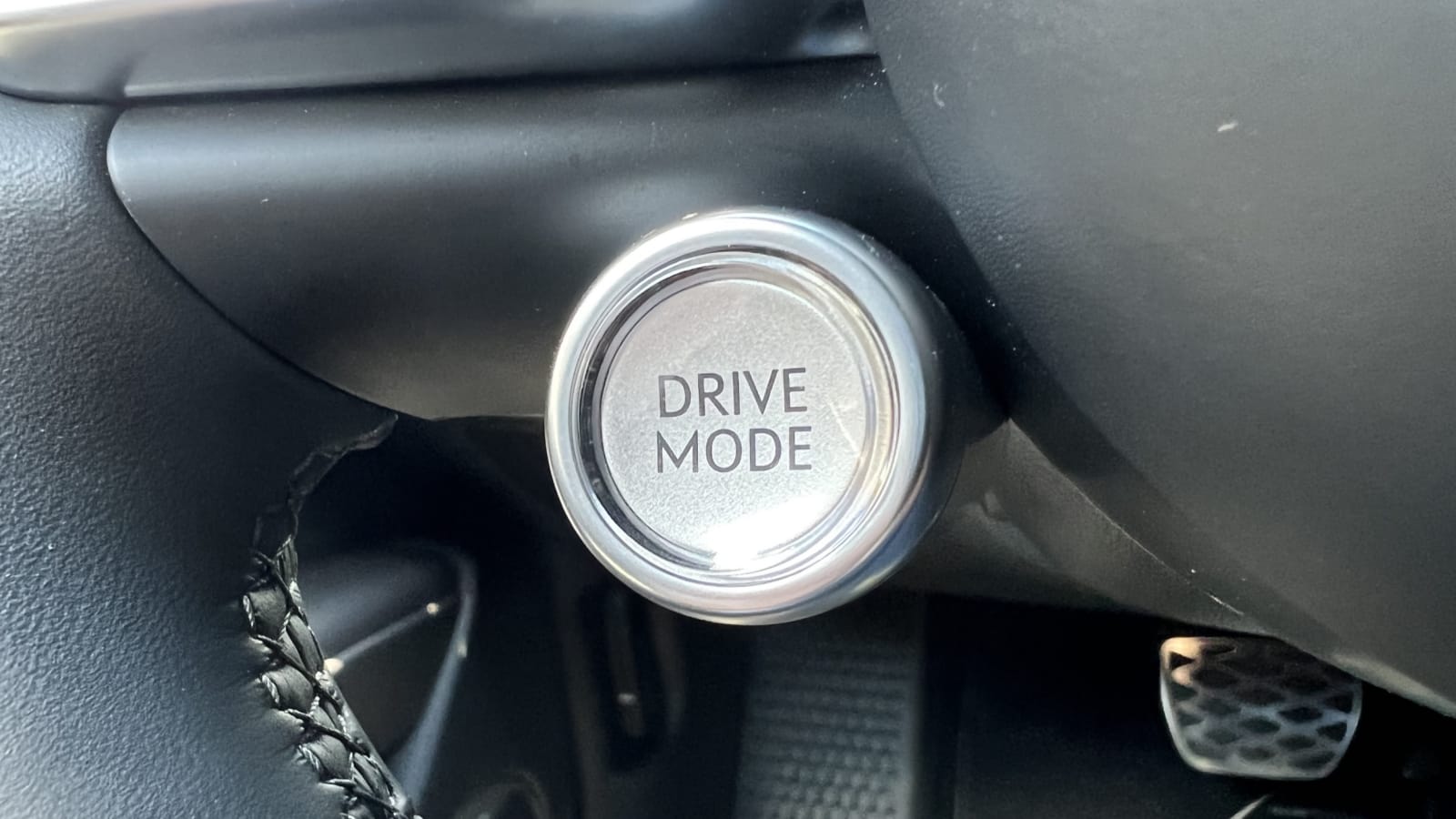 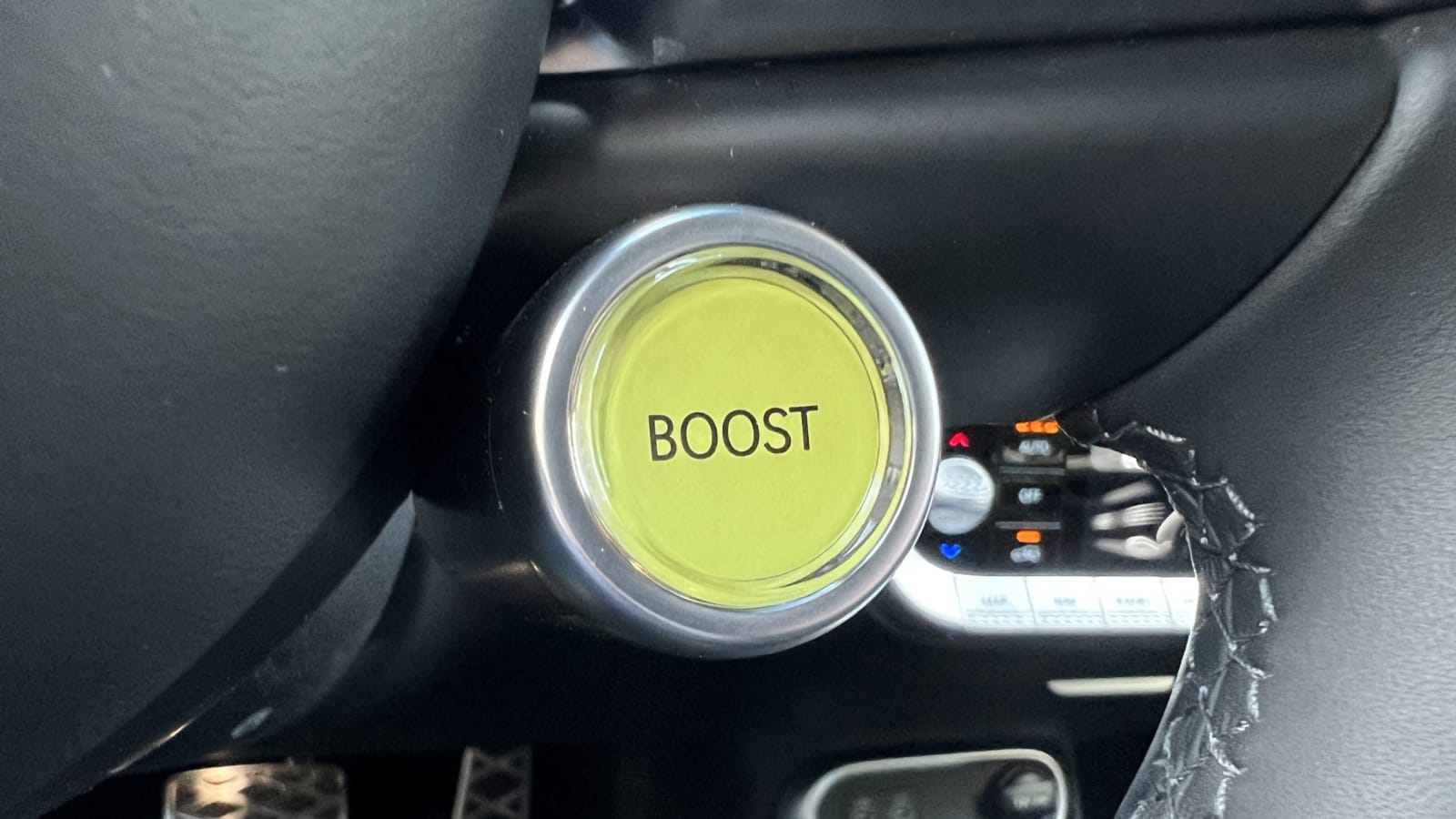 There are no free lunches, however. Both get the same-sized 77.4-kilowatt-hour battery pack as its E-GMT siblings, but worse range. The Advanced provides an EPA-estimated 248 miles of range, while the Performance falls to 235 miles. The latter is an uninspiring number these days and if range is a priority, the Electrified G80 and its bigger battery rated at 282 miles is likely to be the more appealing Genesis EV. Still, some will view losing those miles as an acceptable sacrifice given the Performance’s extra 115 ponies.

And when unencumbered by the comfort requirements of a queasy passenger, those numbers translate in practice to an accelerative experience that is comically spanking, sending the front tires spinning and the speedometer sweeping past 60 mph sooner than you can think to check (seems like a scant 4 seconds, tops). Using Boost mode while already underway instantly feels like you’ve cut loose an anchor you’ve been dragging, allowing you to whip past a slower driver or shoot your way into a gap in traffic from a freeway on-ramp. After the 10 seconds are up, Boost mode is ready to do it all over again, no cooldown required.

You can also choose from a number of drive modes: Eco, Comfort and Sport. There’s also a Custom mode, which allows you to pre-select settings for the motor, steering, suspension, E-LSD and stability control. For each of those individual settings, you can choose between Comfort and Sport. The motor setting also has an Eco option, while the E-LSD has an “Off” option. To adjust your regenerative braking settings on the fly, you can use the paddles on the back of the steering wheel. You can dial it down to a coast, or up to the “i-Pedal” mode that approaches one-pedal driving. As in the Ioniq 5, EV6 and Electrified G80, however, the GV60 will not “remember” if you were using i-Pedal the last time you drove the car. You have to re-select it every time.

While the fastest of the E-GMP trio, the handling of the Genesis GV60 is not as sharp as that of the sportiest (and priciest) EV6 and Ioniq 5. The comparison is a bit like that of the Ford Mustang Mach-E and Volkswagen ID.4 — like the Ford, the GV60 is quick and smooth in a straight line, but a bit wallowy when responding to steering inputs. The steering feel is great, with a good weight and balance, especially in Sport mode, with nice tactile feedback. It provides a good sense of the interaction between the tires and the pavement, which is always in flux with this much torque on tap. Turn-in is a little slow, and the GV60 has a tendency to roll a bit on its compliant suspension as you build up lateral g forces. 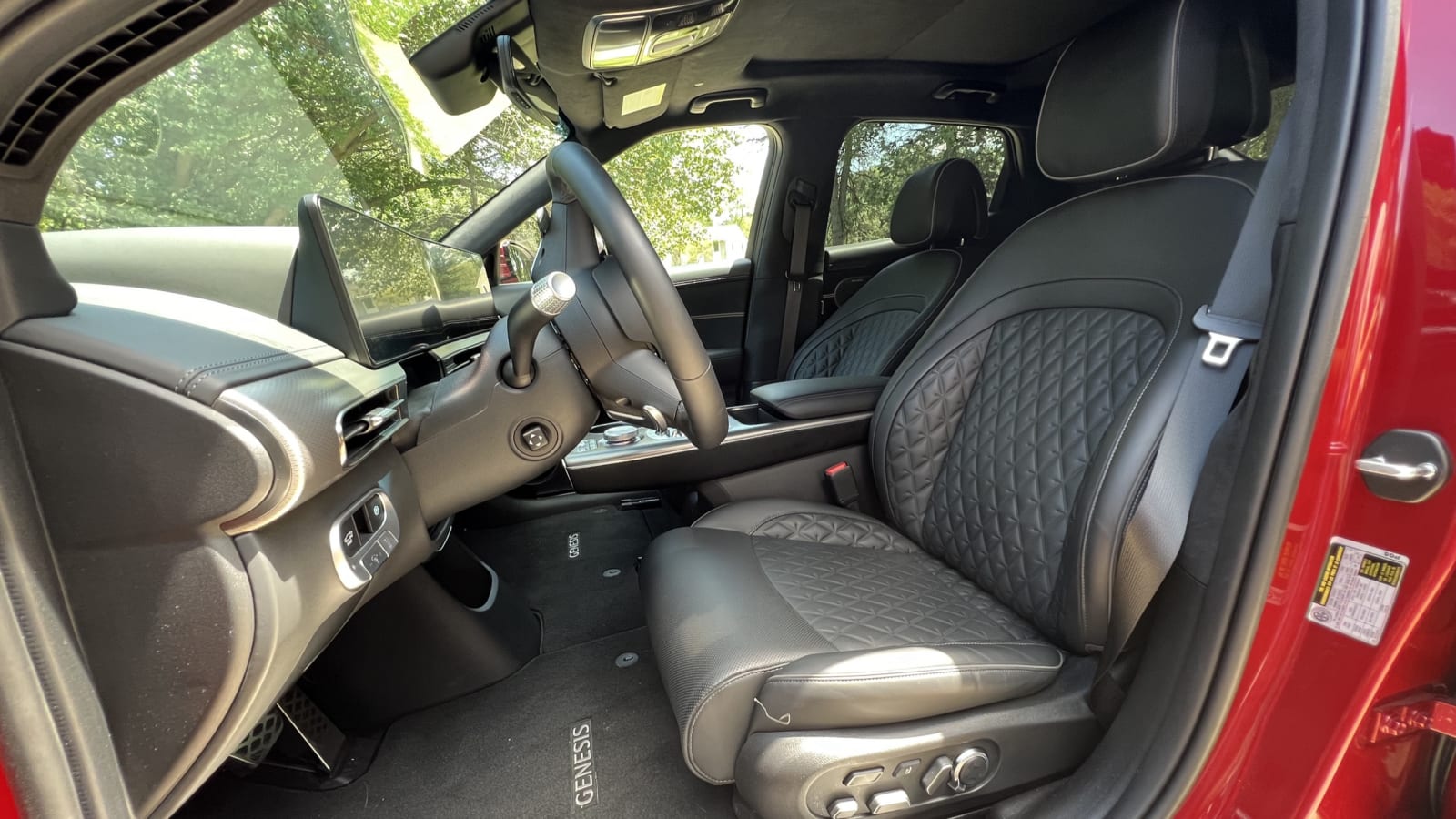 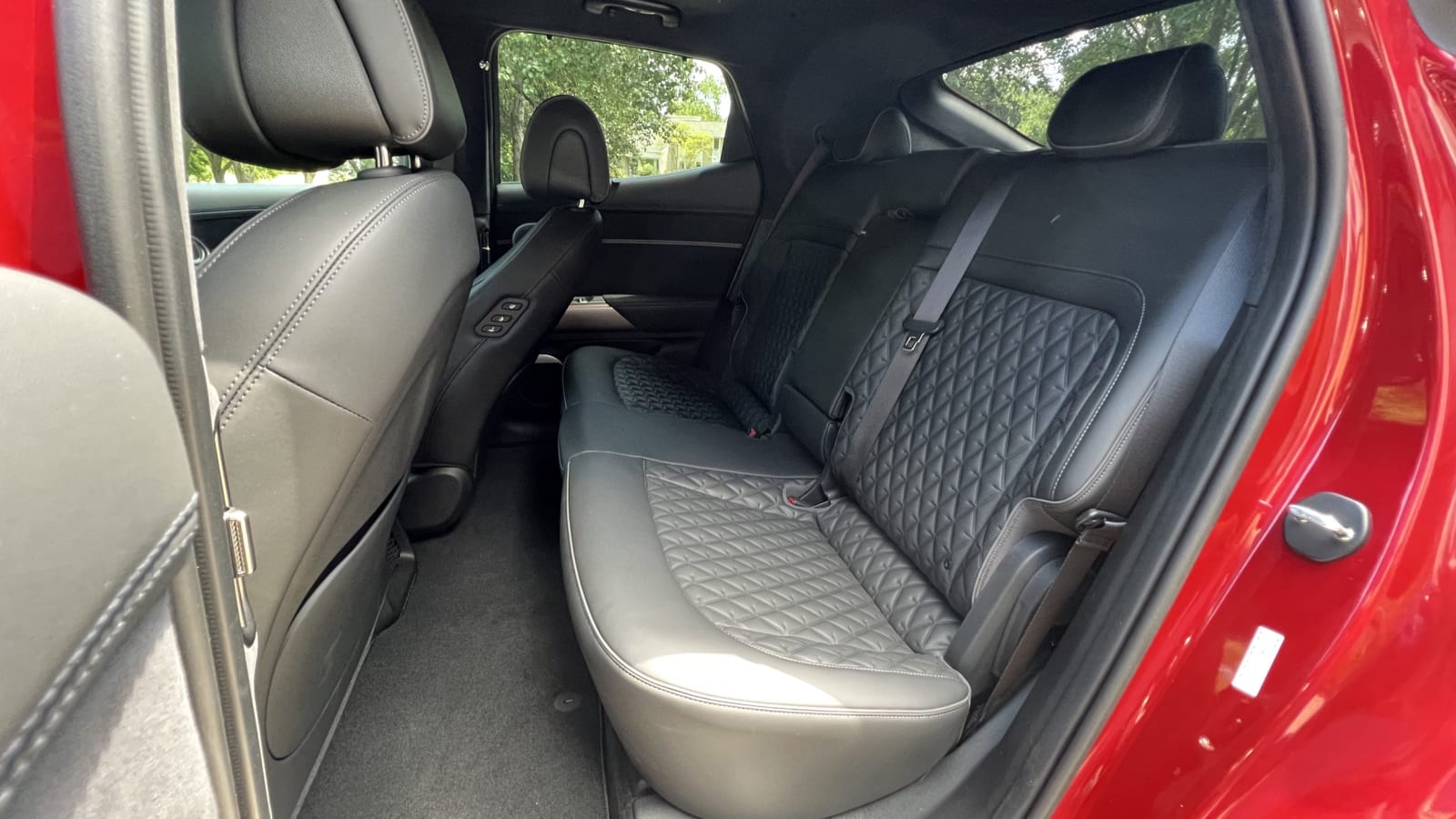 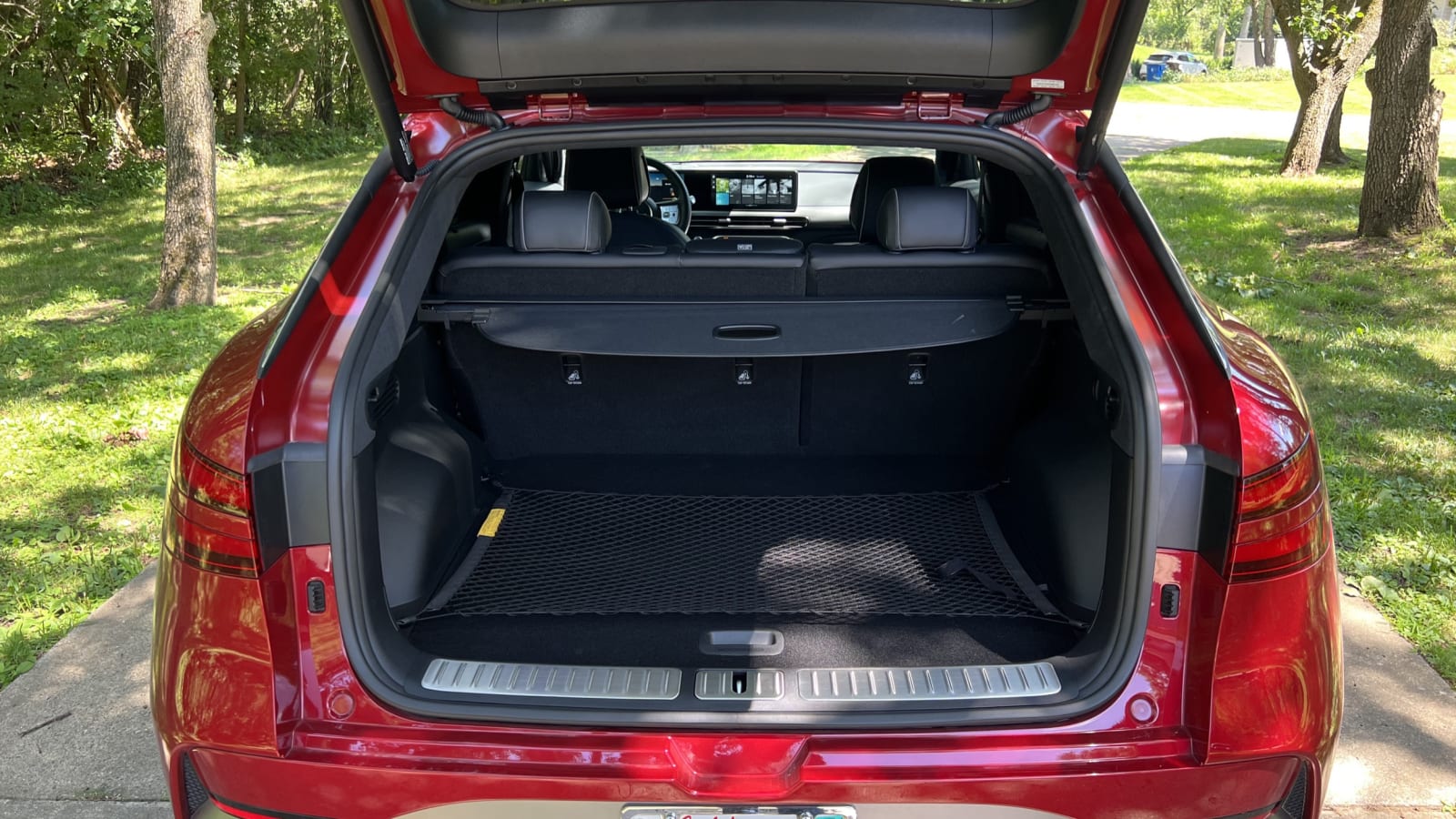 The GV60 is also quick to give away its traction. When launching from a stop in Sport mode, with or without Boost activated, there’d be a chirp from the front tires as they first started spinning. Then, if Boosting, there’d be another, longer squeal a moment later. Feed in some steering angle, and you get even more drama from the tires. It’s fun when you want to goof off, but it wouldn’t help with any lap times … but that’s not what the GV60 is for.

Speaking of inappropriate, Genesis thought to include a Drift mode in the GV60. There’s a bit of a trick to activating it, not unlike a video game cheat code. You put it in Sport mode, hold the stability control button for about 3 seconds until it turns off completely, then hold both regen paddles on the back of the steering wheel simultaneously for 3 seconds. If done correctly, you should get a notification on the instrument panel that the car is ready to give up some grip and rubber. Your neighbors and the owners of local parking lots will probably not approve, but go ahead, drift away.

To add a sensual layer to the driving experience, the GV60 offers a number of artificial sounds — Active Sound Design, in Genesis terms — that correspond to the forces you’re feeling under acceleration. The “Futuristic” setting sounds the most sci-fi of the three, with overlapping tones rising and falling along with your speed. “G-Engine” does a fairly convincing impression of a gasoline engine, like a quiet version of a sporty exhaust. “E-Motor” provides a simple, familiar whine, which is most like what you’d hear if the GV60’s sound deadening and noise canceling weren’t as good as they are. You can choose between three volume levels for each sound, or you can choose to turn the fake noises off completely, which is what we elected most of the time.

Thanks to the platform’s 800-volt architecture, the Genesis GV60 is one of the fastest-charging EVs. If you can find a working 350-kW DC charger, it can charge the battery from 10% to 80% in about 18 minutes, much like the Ioniq 5 and Kia EV6. With no extended road trips during our week with the car, simply keeping it topped up using the car’s mobile charge cable and a Level 1 household outlet in the garage was sufficient.

So, the first Genesis EV is a success, at least in terms of execution. Time will tell how its sales fare relative to other luxury EVs, but GV60 customers should be happy with their cars. It’s hard not to like a vehicle built on the back of the Hyundai Ioniq 5 and Kia EV6. Sharper handling would be nice, especially for the model dubbed “Performance,” but not if it meant sacrificing the calm, quiet ride or the car’s suitably elevated refinement. How about a trade for Drift mode instead?