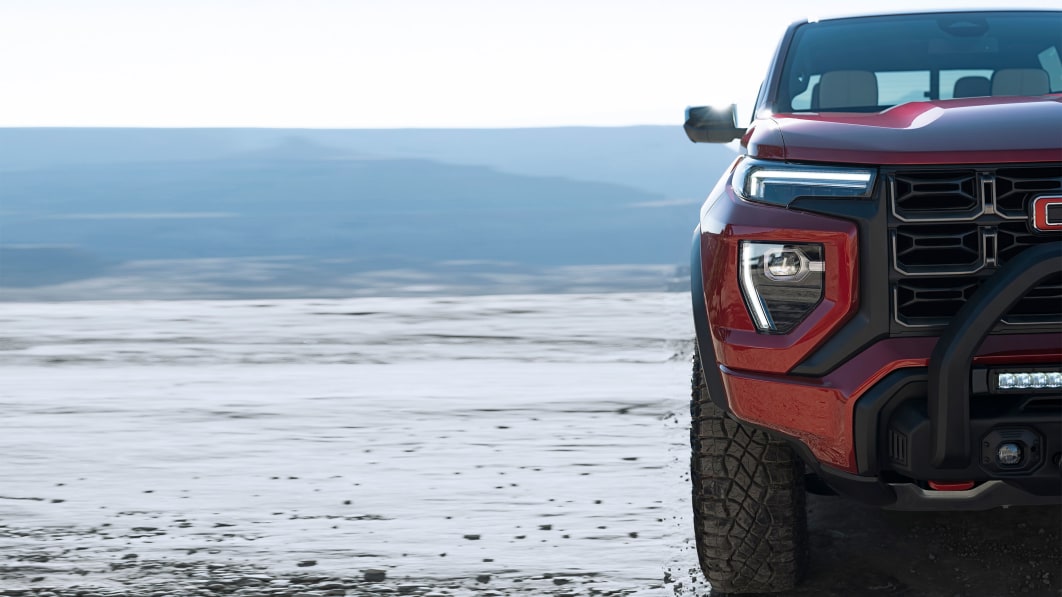 Chevrolet started GM’s new-generation midsize truck party with the 2023 Colorado, now GMC’s about to hit the stage with the 2023 Canyon. On August 11 at 11 a.m. Eastern time, we’ll see what the new generation has done for the Colorado’s upscale sibling. GMC teased us with a low angle of the coming Canyon in AT4X trim April. That revealed brawnier bits like big Goodyear Wrangler tires wrapped around 17-inch beadlock-capable wheels, plastic wheel arch flares, and rock rails. The initial version of that trim will be called the AT4X with Edition 1 Package, the front view showing split headlights, a new grille, thin LEDs, and a brush bar like the unit sprouting from nose of the Colorado ZR2 Desert Boss. We’re also told there will be a “higher and wider stance, which is factory lifted.” The current AT4 trim gets raised one inch, and we have a feeling the AT4X will get around three inches on its tippy toes just like the Colorado ZR2.

The rationalization of body styles into a single Crew Cab Short Box will make ease configurations and production. Sadly, the 2.8-liter Duramax four-cylinder diesel is all but certain to be a goner here as well. The 2.7-liter four-cylinder gas engine should slip in here as the sole engine choice in two or three outputs. There’s no telling which trims will get which outputs standard, but the choices are a base tune with 237 horsepower and 259 pound-feet of torque, a middle turbocharged tune with 310 hp and 390 lb-ft, and a high-output turboed topper with 310 hp and 430 lb-ft.

The 2023 GMC Canyon AT4X with Edition 1 Package will be available to order on the same day the lineup is revealed, at which time we expect to find out what’s included in the Edition 1 versions compared to the AT4X variant that will join the lineup for series production.