Following up on the reveal of its twin, the Chevy Colorado, the 2023 GMC Canyon has made its appearance. Naturally, it shares much with the Chevy pickup, but GMC has gone to greater lengths to differentiate the truck. It comes standard with the high-output engine, all versions feature the wide-track suspension setup, and in addition to the now more luxurious Denali, there’s a ZR2-based AT4X trim.

As with the new Colorado, the Canyon gets an overhaul of the design. It’s down to one bed and cab configuration (short-bed, crew cab), and it features a longer wheelbase with the front axle pushed forward. The Canyon does get a variety of unique design features, though. It has its own front fascia with a tall, rectangular grille. LED lighting is standard on all Canyon models all the way around. That includes the unique fender lights like those found on the Sierra HD. All Canyons also feature the wide-track off-road suspension like the Colorado Z71 and Trail Boss. There are no narrow-track, narrow-body versions, even on the base two-wheel-drive Elevation. That suspension also means all Canyons have a roughly two-inch lift over base Chevy Colorados. The GMCs also get standard 32-inch tires, and they don’t feature a front air dam in order to provide better approach angles. The bed, while only available in one trim, is available with a unique storage bin in the tailgate. 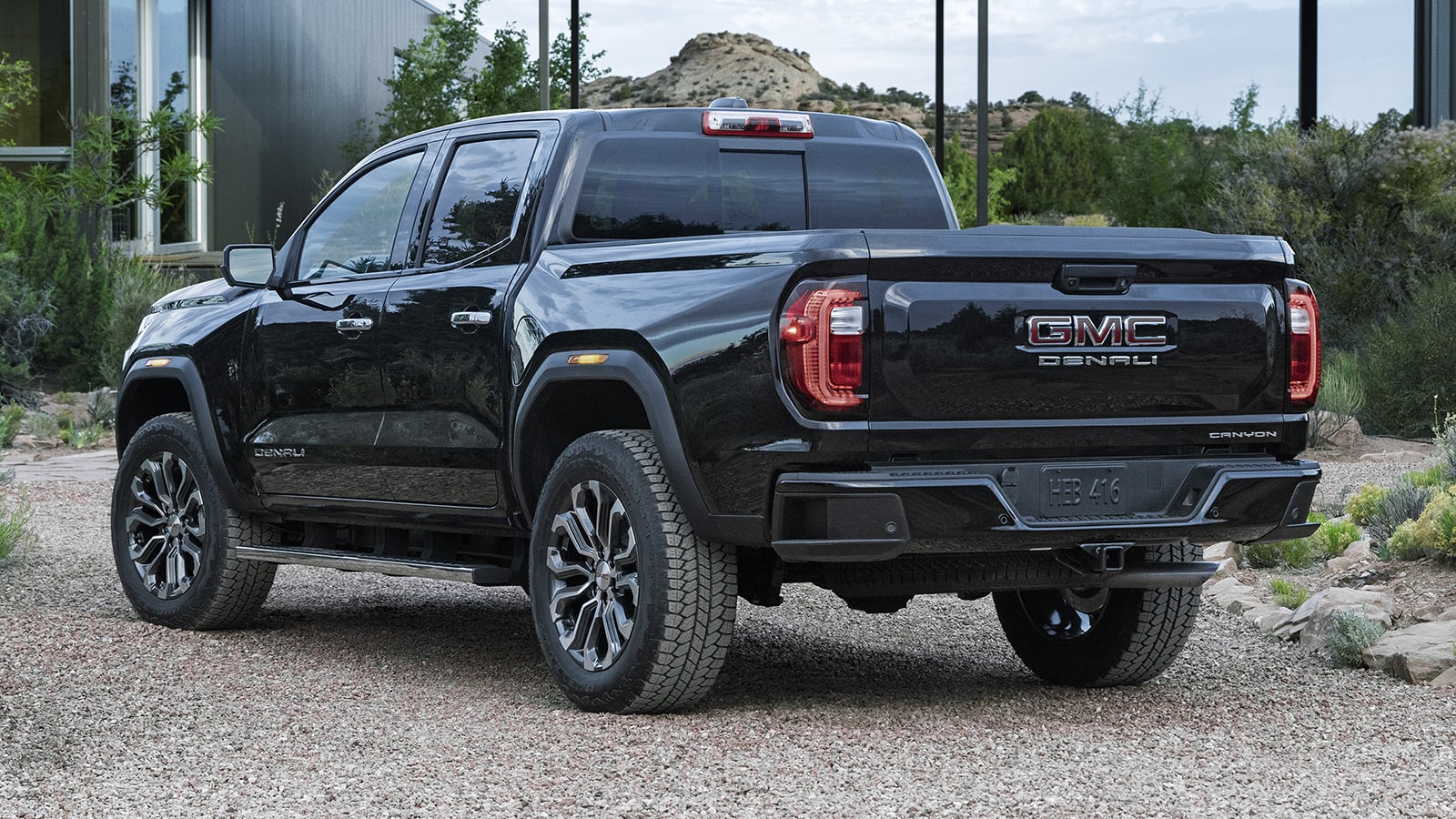 On the topic of suspension specs, the Elevation and AT4 trim levels have 9.6 inches of ground clearance. The Denali increases that to 10.5 inches, and the AT4X features 10.6 inches. It also picks up the Multimatic spool-valve shocks from the ZR2. But we’ll talk more about what comes on the AT4X in a bit.

Under the hood of the Canyon is just one engine. It gets the highest-output version of the 2.7-liter turbocharged four-cylinder. The engine makes 310 horsepower and 430 pound-feet of torque. The only transmission is an eight-speed automatic. Two-wheel drive comes standard on Elevation, and other trims come standard with four-wheel drive. 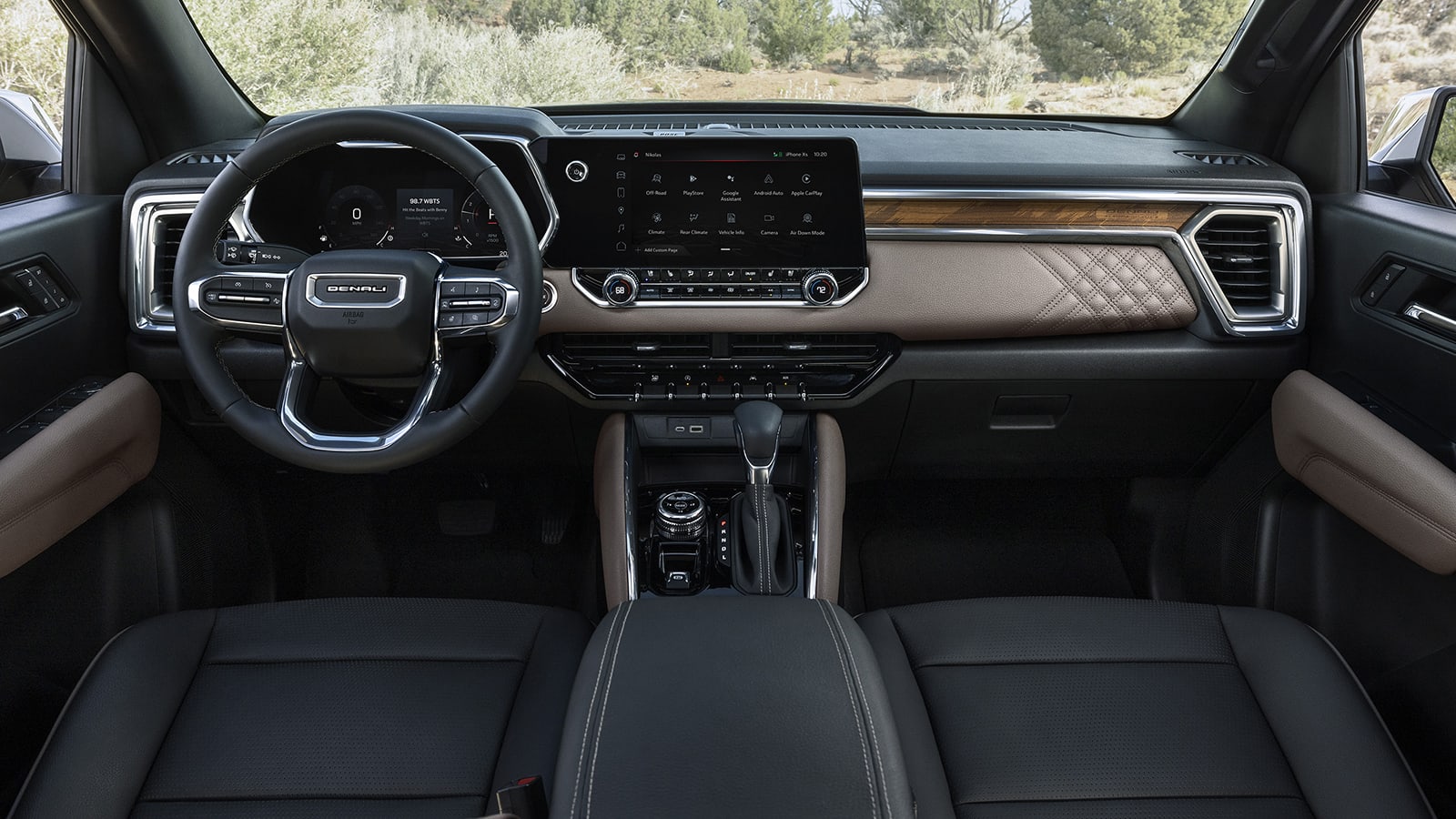 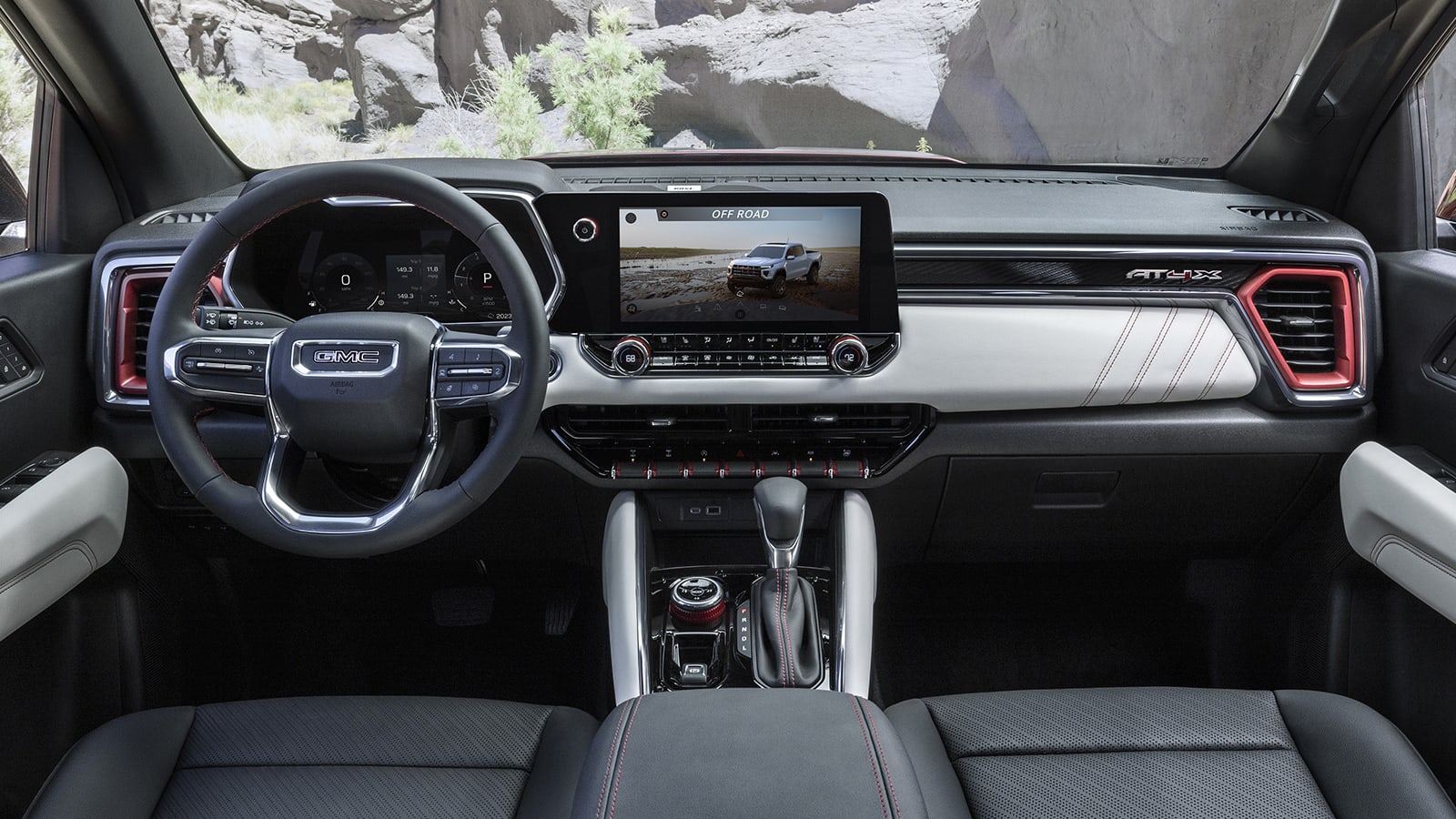 The inside of the Canyon is very similar to the Colorado, but it has some unique cues. It has air vents that are more integrated into the squared-off dashboard design, rather than the Chevy’s round vents. It has a differently shaped dash pad and trim surrounds, too. The really big differences come on the Denali and AT4X trims, though. The Denali features real wood trim with laser etchings. It also gets lots of real leather and fancy stitching. Naturally it gets all the interior goodies such as the 11-inch instrument display (8-inch is standard on lower trim Canyons), 11.3-inch infotainment screen and GMC-exclusive head-up display. The AT4X loses the wood, but it gets a bold black and white interior with bright red accents all around.

All Canyons do come reasonably well-equipped, though, with the large touchscreen, wireless Apple CarPlay and Android Auto. They can also finally be equipped with a factory sunroof. Standard safety features include automatic emergency braking with pedestrian and cyclist detection, lane-keep assist and automatic high-beam headlights. Adaptive cruise control, blind-spot monitoring, surround-view cameras, and rear cross-traffic alert with pedestrian detection are all available in optional packages and trims. 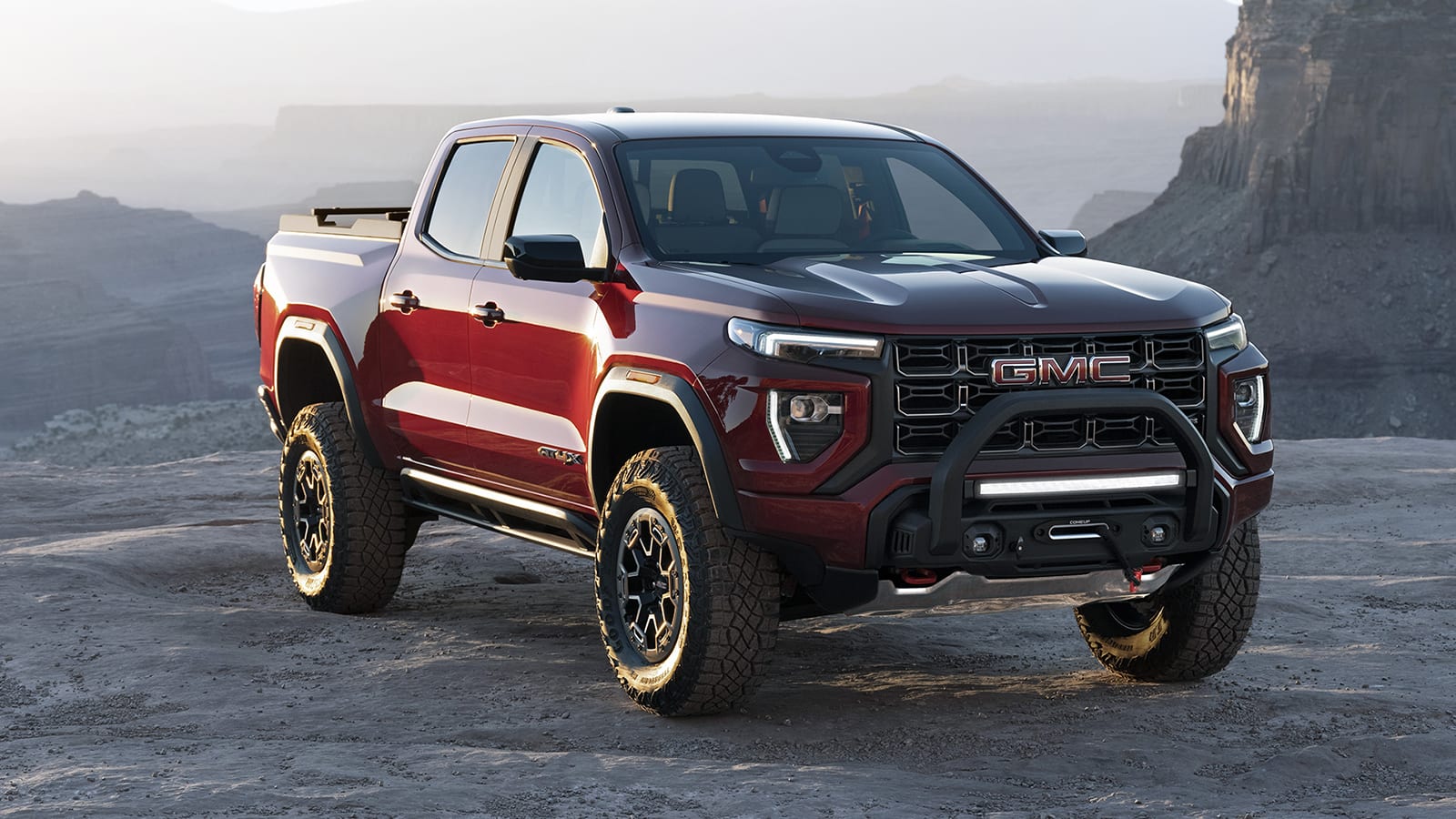 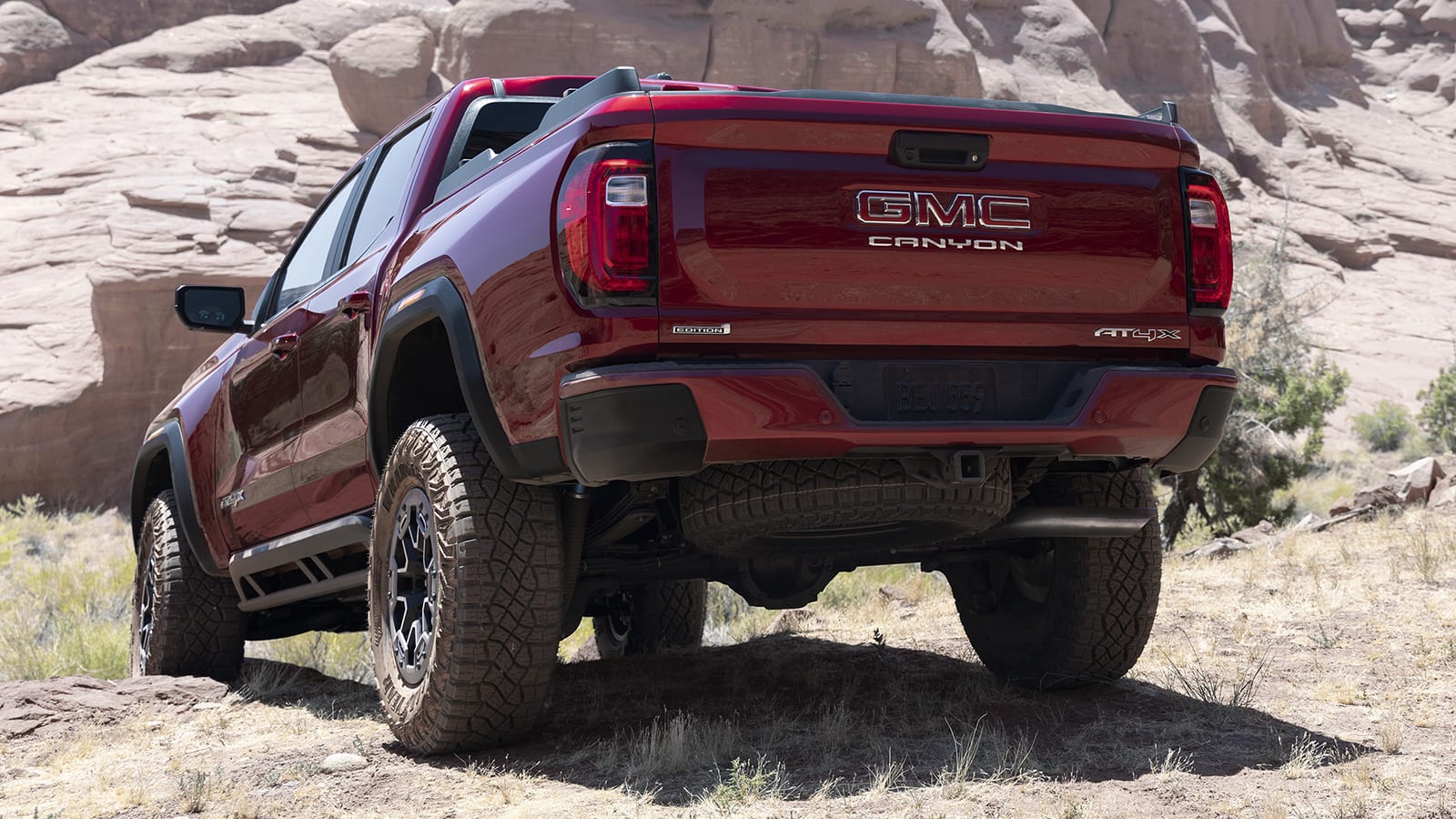 Now we come to arguably the biggest news, the introduction of GMC’s take on the ZR2. It’s the AT4X and it gets all the same off-road goodies. It gets the aforementioned suspension, unique front fascia, skid plates, front and rear locking differentials, 33-inch tires and Baja drive mode. It also gets a special Edition 1 model which brings even more to the table. It features 17-inch beadlock-capable wheels, a front safari bar with 30-inch off-road light bar, a Comeup winch, upgraded skid plate, bed rails and special badging.

Production for the new Canyon starts early next year. GMC is taking reservations for the AT4X now, which will go into production in the spring. Pricing hasn’t been released for all models yet, but the base Canyon will start around $40,000. The AT4X starts at $63,350 without destination, which hasn’t been announced yet.