Cons: Lack of specialty options such as plug-in hybrid and off-road models

Honda’s best-selling vehicle is back and bigger than ever in the form of the 2023 Honda CR-V. The compact SUV has been a standard bearer for its segment with a strong blend of good driving dynamics and excellent practicality. We’re not able to share impressions about how the new model drives (check back later this month), but even when examining it standing still and checking out the spec sheet, it seems to bring a host of improvements over its already solid predecessor.

Among the big improvements is, well, that it’s bigger. It’s the largest CR-V yet, and that’s reflected in a very spacious interior with maximum cargo space that once again sits at the top of its class. It also gets a massively improved infotainment system, and the hybrid powertrain has been updated to offer more torque. We also find the styling to be significantly improved.

The new 2023 CR-V is entering an extremely competitive segment, though, and while it smartly aims itself at the heart of the market, it offers none of the branches into the various niches that have sprung up in recent years. There’s no plug-in hybrid offered to answer the Toyota RAV4 Prime, Hyundai Tucson PHEV, Kia Sportage PHEV and Ford Escape PHEV. There’s also no higher-performance engine available (long a CR-V complaint) such as in the Mazda CX-5 and VW Tiguan, nor a more rugged trim level as with the Sportage, Mazda CX-50 and Subaru’s Forester and Outback. Basically, the CR-V could stand to be a bit more interesting. But if you’re looking for a more conventional small SUV, the new CR-V will still be something to keep an eye on and add to your test-drive list.

The 2023 Honda CR-V is fully redesigned for the new model year. 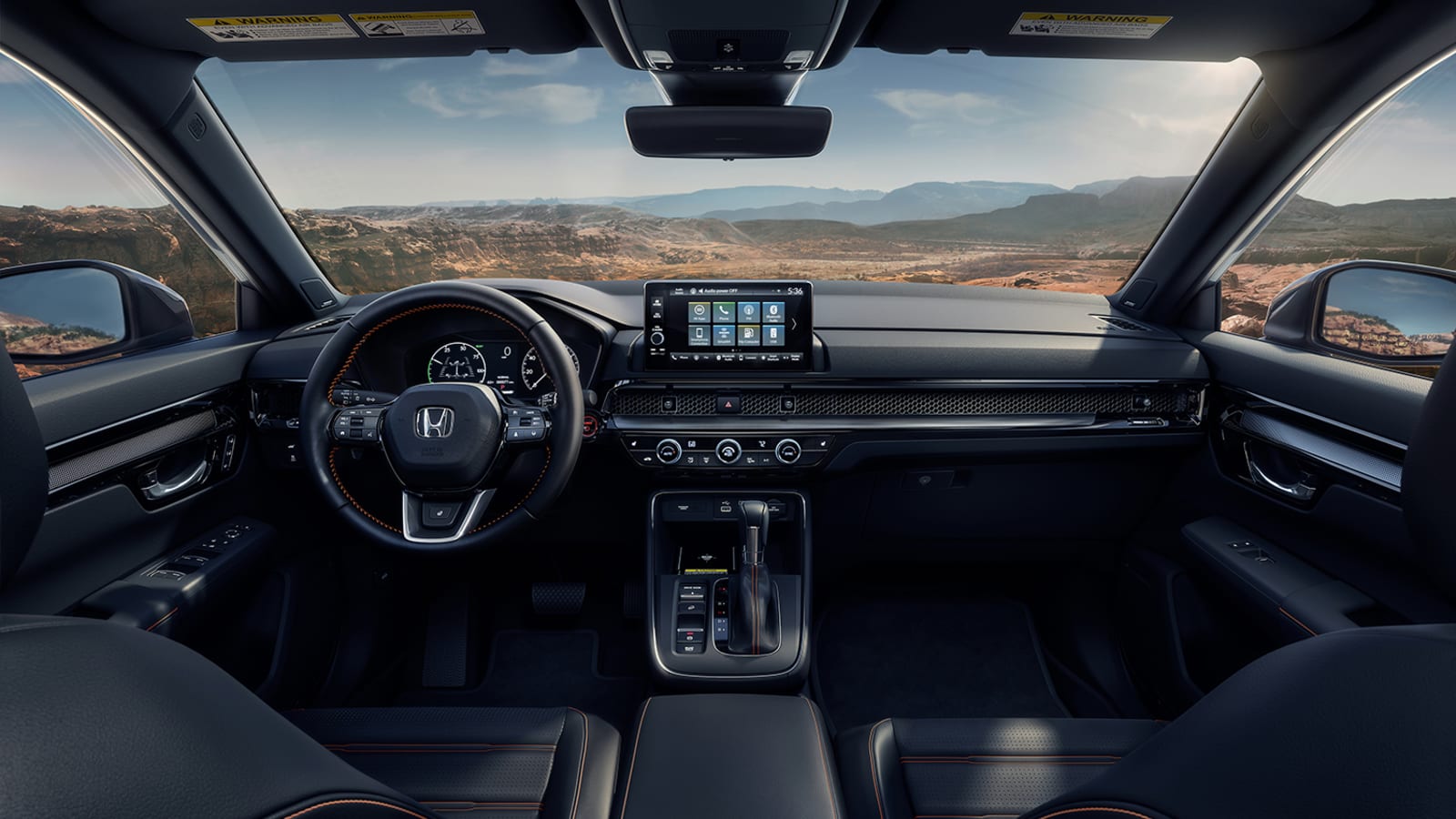 What are the CR-V interior and in-car technology like?

With a whole new exterior comes a whole new interior. Or at least, new to the CR-V. If you’ve been in a new Civic, its layout and design will look extremely familiar. It’s also very similar to the also new HR-V. Fortunately, it’s a very good interior. The look is clean and uncomplicated. The dash is also low and aids in both visibility and making the cabin feel spacious. All the switchgear feels high-quality with tight, solid action whether it’s a turn signal stalk or the highly welcome climate control dials. Though there are many plastics, they have attractive finishes and patterns. It’s not quite up to the premium feel of the Mazda CX-50 or CX-5, but it’s comparable to Kia Sportage and Hyundai Tucson. It’s also much nicer than what you’ll find in a Ford Escape or Chevy Equinox.

As for instruments and infotainment, the CR-V features an analog speedometer combined with a 7-inch screen that can display the tachometer and other information. The standard infotainment display is a 7-inch touchscreen with volume and tuning knobs and a couple of physical menu buttons. Apple CarPlay and Android Auto are standard. On the higher EX-L and Sport Touring trims, the CR-V gets a larger 9-inch touchscreen with just a volume knob and menu buttons, and both wireless Apple CarPlay and Android Auto plus wireless charging. With either screen size, this infotainment system now uses the operating system and interface from the Accord and other Hondas rather than the slow, buggy and ugly system used by the previous CR-V. It’s far more attractive; features large, attractive and easy-to-press icons; there are fewer layers of menus and far faster reactions. It’s a system that’s actually competitive with its competitors, though we still prefer the Hyundai/Kia system. 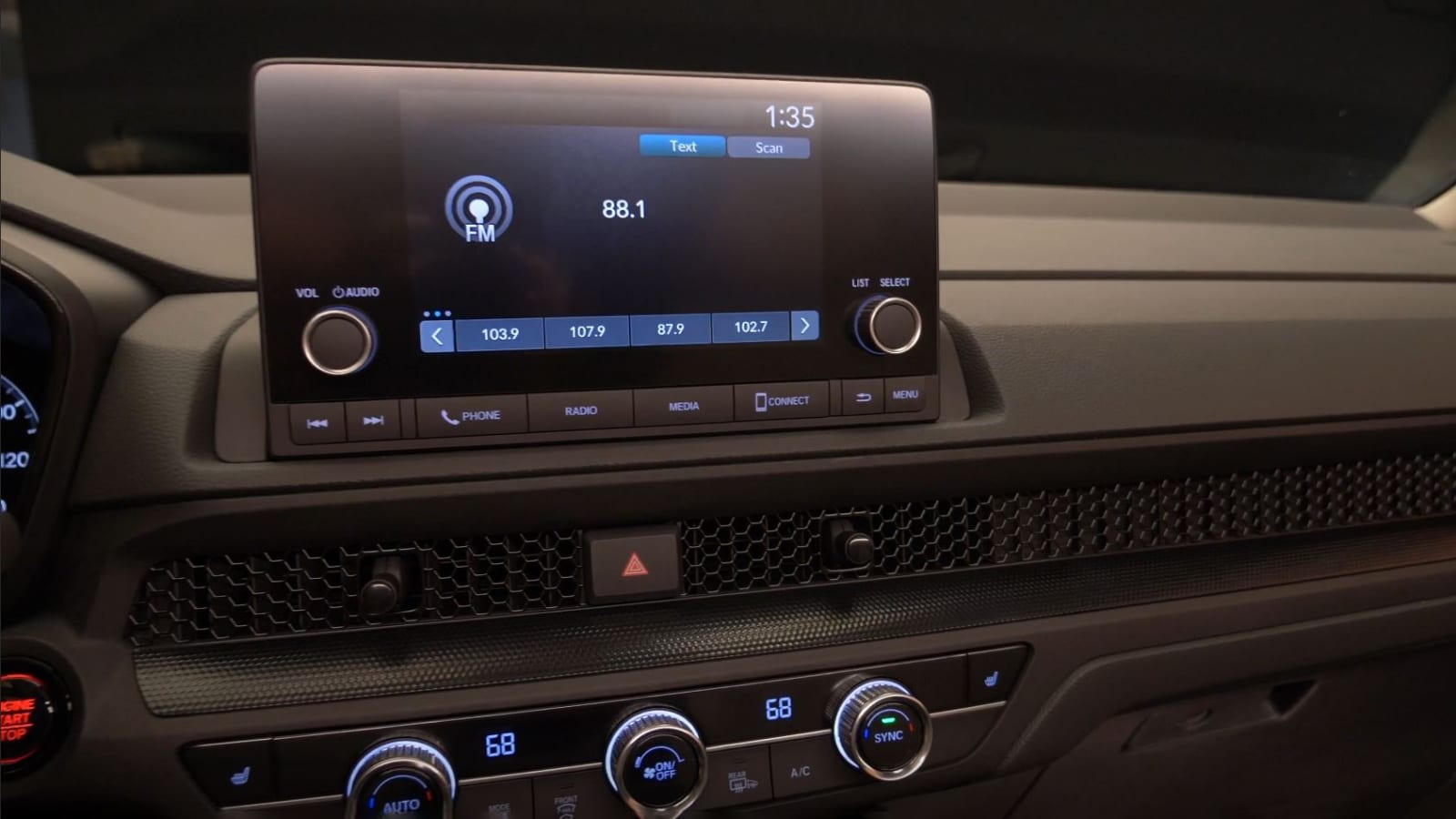 How big is the CR-V?

The CR-V has grown significantly with this generation. It’s 2.7 inches longer with a 1.6-inch longer wheelbase, and it’s 0.4 inch wider. That also makes it a few inches longer than its key rival, the Toyota RAV4. All this stretching pays dividends in all aspects of interior space. Honda hasn’t released specifications on passenger volume, but sitting in the SUV’s cabin, it certainly seems more spacious and comfortable. The front passengers have lots of leg, knee and shoulder room. Head room isn’t quite as generous, but there’s still enough for most people to be perfectly comfortable. The front seats themselves don’t have a huge amount of shape, but they have thick padding and a welcome amount of side bolstering. There’s a good amount of adjustment, too, so a comfortable seating position should be easy to find. That hasn’t always been a given in the CR-V.

The rear seats are the real showstopper, though. They’re a bit firmer and flatter than those up front, but they’re comfortable enough and the space is incredible. There’s loads of room in all directions, particularly for the legs. There’s also lots of space under the front seats for feet, effectively adding more space and allowing rear occupants to really stretch out. The rear seat backs recline, too, up to 10 degrees. As such, passengers could be comfortable for many, many hours in the back of a new CR-V.

Cargo space is now the same regardless of powertrain. The official figure of 36.3 cubic-feet is basically right in between the old hybrid and gas-only volume specs, meaning the new CR-V has both more and less cargo space than before. It also puts it behind the massively enlarged Hyundai Tucson and Kia Sportage, as well as the Toyota RAV4. Ultimately, though, we’re talking degrees of huge here. With the seats down, the CR-V is the new maximum cargo space king, measuring 76.5 cubic feet. 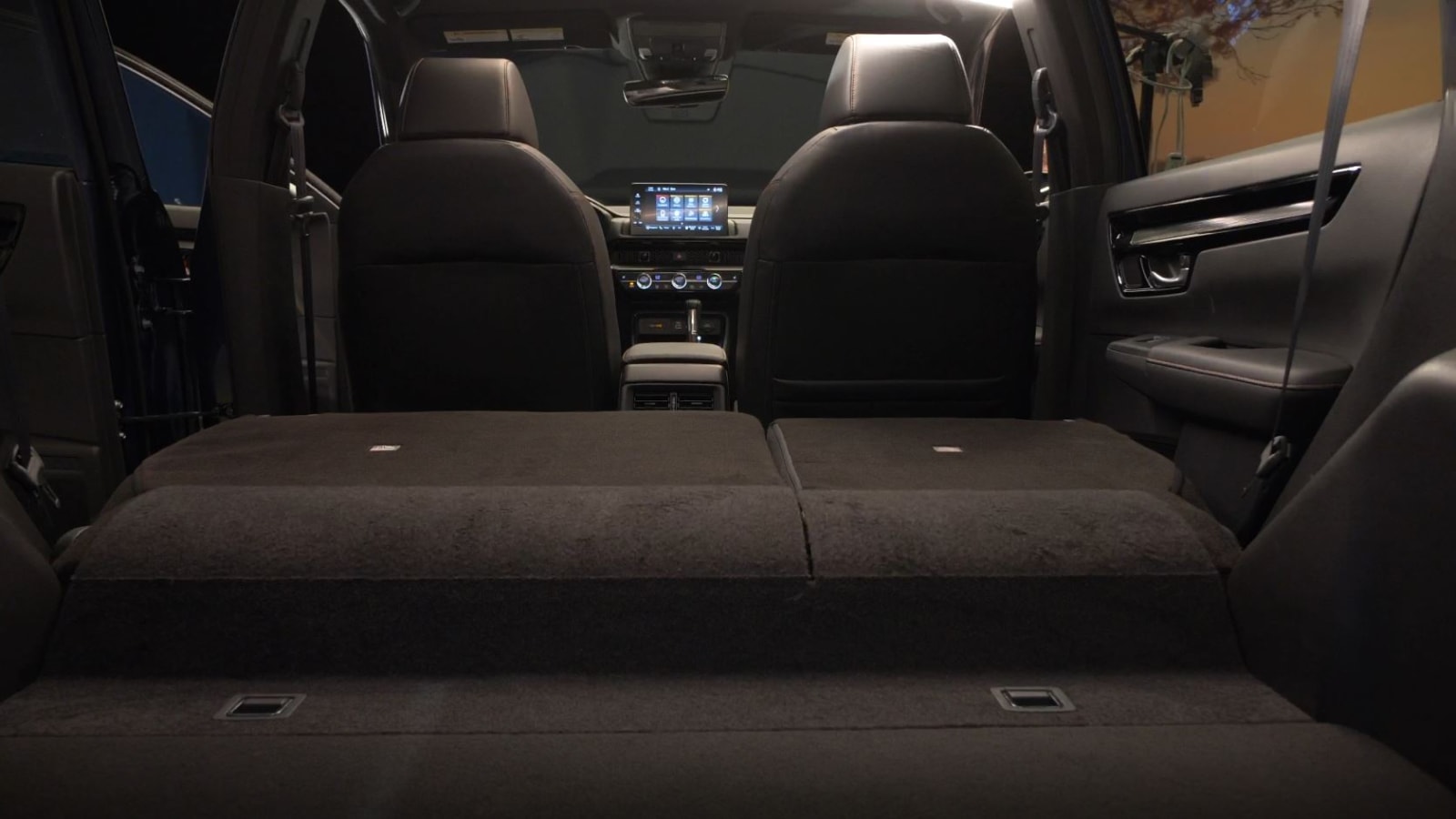 Two powertrains are available for the 2023 CR-V. As before, the standard turbocharged 1.5-liter four-cylinder makes 190 horsepower and 179 pound-feet of torque. Power goes through a continuously variable transmission and on to either just the front wheels or all four with the optional all-wheel drive. Fuel economy numbers have not been announced for the new CR-V yet. The old model got around 30 mpg combined with basically the same powertrain, so numbers should be similar or slightly better.

The other powertrain is the hybrid. It uses a naturally aspirated 2.0-liter four-cylinder and a pair of electric motors. Under most circumstances, it operates as a series hybrid with the gas engine producing electricity and the larger of the two motors turning the wheels. There are some situations where the gas engine can provide drive power directly. Combined power is 204 horsepower and 247 pound-feet of torque. That’s less 8 horsepower less than the 212 horsepower listed for the previous CR-V Hybrid, but 15 more pound-feet of torque. Again, fuel economy for the new model has not been announced, but it should be similar, possibly more than the 38 mpg combined of the previous model. 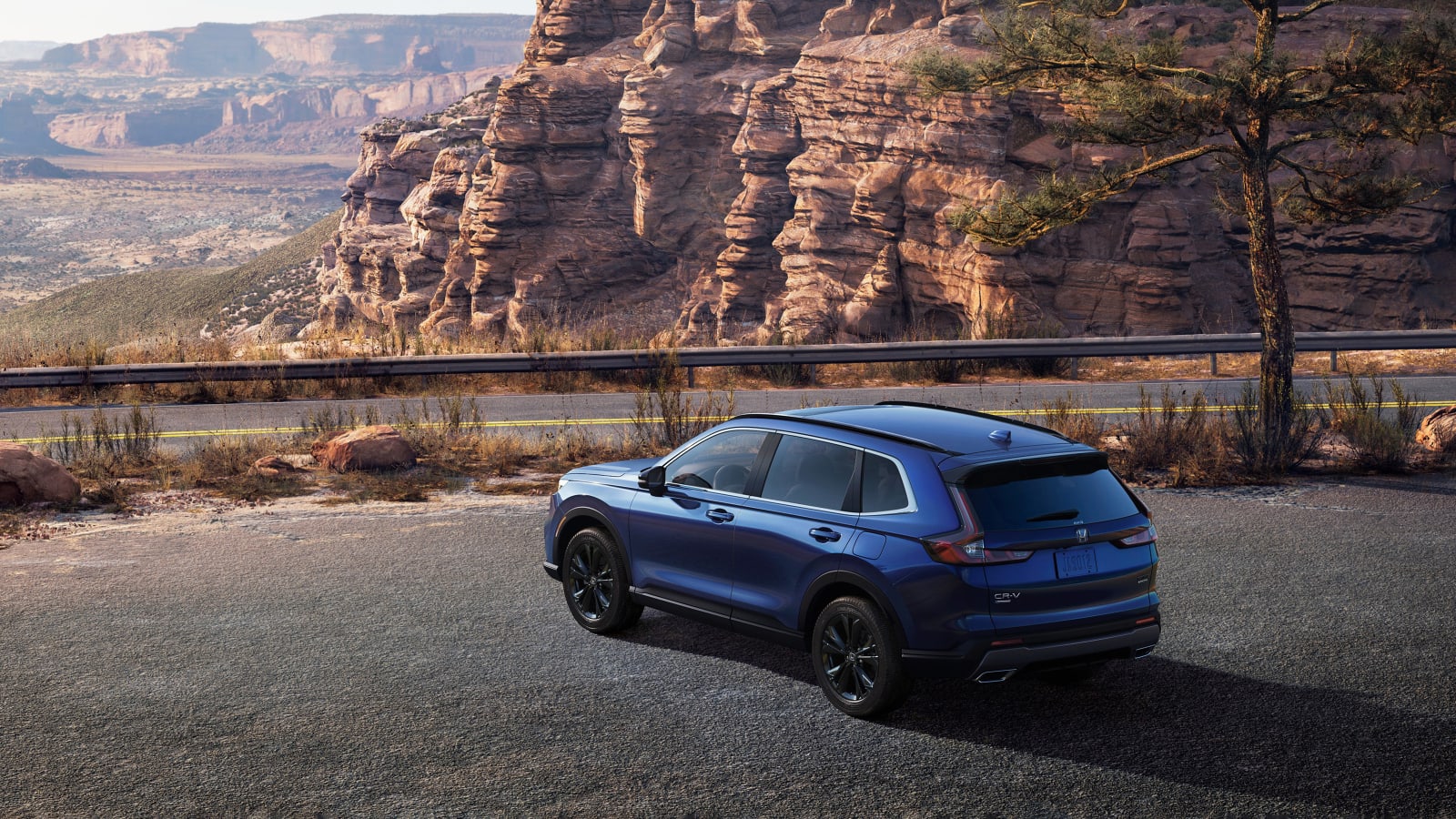 We haven’t been able to share our first drive experience with the CR-V yet, but we will update this section with our impressions as soon as our first drive review publishes.

Pricing has not yet been announced for the CR-V. We expect the base price to increase over the current model’s starting point of $28,045. The reason being that Honda has eliminated the entry-level LX trim, instead opting for just EX and EX-L for the non-hybrid, and Sport and Sport Touring for the hybrid.

What are the CR-V safety ratings and driver assistance features?

The 2023 CR-V once again comes with many standard safety and driver assist features. It features forward collision warning, automatic emergency braking, blind-spot and rear cross-traffic warning, lane-keep assist, and adaptive cruise control. These have all been upgraded from the last CR-V, which is good news, as their predecessors were comparatively rudimentary in performance compared to rivals. Judging by the similar updated systems in the new HR-V and Civic, the CR-V’s driver assistance systems should be greatly improved.

The new CR-V hadn’t been crash tested by a third party at the time of this writing.