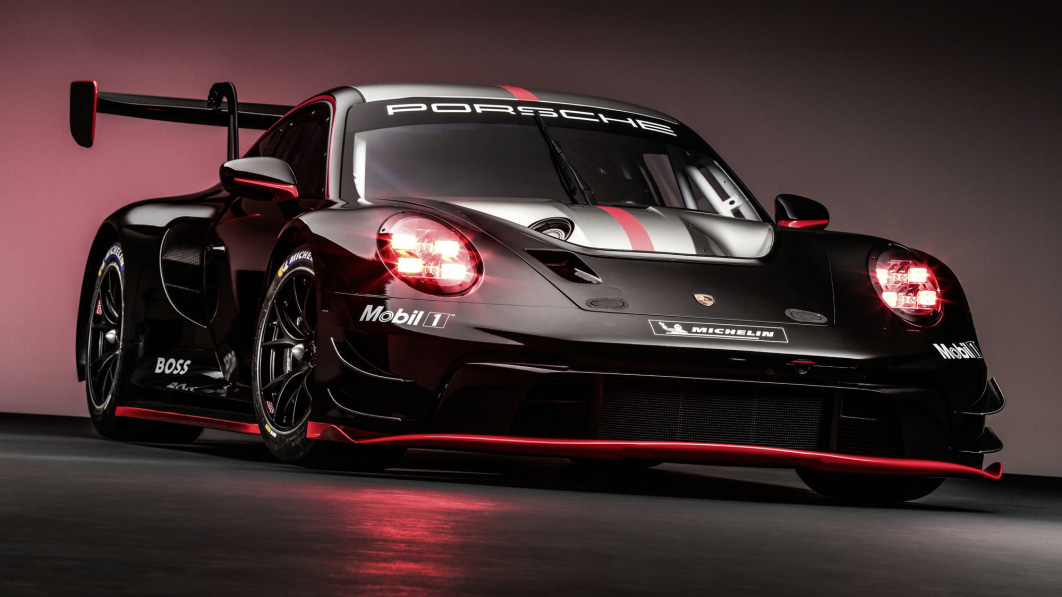 Porsche has kept a long-standing tradition going by unveiling the new 911 GT3 R. Based on the current, 992-generation 911, the track-only coupe benefits from a bigger and more powerful naturally-aspirated flat-six engine, more downforce, and suspension modifications.

Development work started in 2019, and engineers set out to make a long list of improvements over the successful last-generation model. Their goals included improving drivability and handling and reducing running costs. The last point is important because the 911 GT3 R will be eligible to compete in a wider selection of races starting in 2024, when GT3-spec cars are allowed to race in the FIA’s World Endurance Championship (WEC). That means cars like the 911 GT3 R will be invited to line up on the starting grid at the 24 Hours of Le Mans.

Power for the GT3 R comes from a flat-six engine whose displacement was increased by 5% to 4.2 liters. It develops about 565 horsepower, and it spins the rear wheels via a six-speed sequential gearbox linked to a pair of shift paddles. The engine remains rear-mounted, but it’s tilted forward by 5.5 degrees to clear up more space for the rear diffuser. Porsche also notes that it relocated several components, including the air conditioning system’s compressor and the alternator, to a space in front of the engine to improve the car’s weight distribution.

Mechanics will be able to make setup modifications to the suspension using shims that eliminate the need to spend time re-aligning the system after it’s been adjusted. The suspension changes made to the GT3 R also reduce tire wear, which helps bring down racing costs. Porsche notes that it moved the rear wheels further back to increase the wheelbase and reduce load on the back tires, and the braking system includes six-piston front calipers that grip massive, 15.35-inch rotors plus four-piston rear calipers mounted around 14.56-inch rotors.

Carbon fiber body panels and an aluminum-steel composite body help keep weight in check, though Porsche hasn’t published how much the 911 GT3 R weighs. Visually, the GT3 R is characterized by a redesigned body kit and a huge rear wing mounted on a set of swan necks. There’s more to it than meets the eye, though: The part of the underbody that’s ahead of the front axle is elevated to improve the flow of air to the rear diffuser. All told, the 911 GT3 R offers more downforce than its predecessor, yet the modifications don’t create additional drag.

Inside, Porsche moved the driver’s seat closer to the center of the car in the name of ergonomics. The seat is fixed, though the steering wheel and the pedals can be adjusted, and special ramps save about a second per pit stop by making the six-point harness faster to fasten.

Priced at $567,210 excluding destination and options, the Porsche 911 GT3 R is on sale now through Porsche Motorsport North America. It will make its competition debut at the 2023 edition of the Daytona 24 scheduled to take place in January 2023.