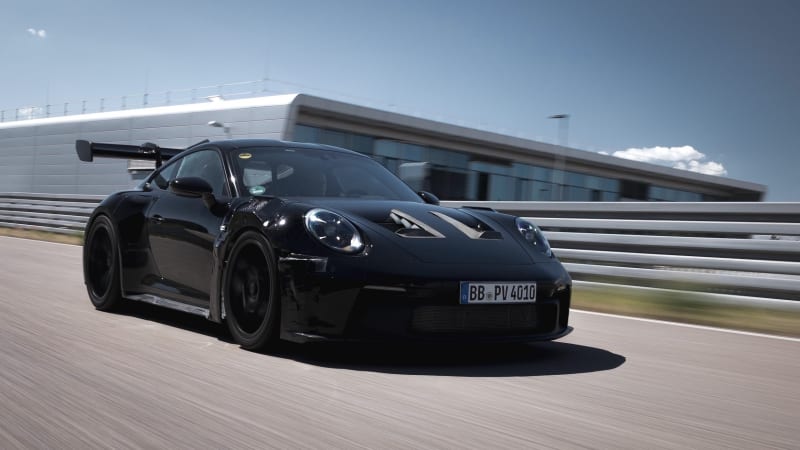 Porsche is nearly ready to introduce the GT3 RS evolution of the 992-generation 911. The race-bred coupe is set to make its public debut online Aug. 17, and a photo of a test mule published by the German firm gives us a decent idea of what the track star will look like.

Visually, there are no major surprises: The GT3 RS still looks like a 911. Porsche chiseled big vents into the hood, it kept the last-generation model‘s fender-mounted vents, and it designed a new body kit characterized by a huge rear wing mounted on a set of sway necks. This styling cue is shared with the track-only 911 GT3 R, which is also scheduled to make its global debut in the not-too-distant future.

It sounds like much bigger changes are lurking beneath the sheetmetal.

“The new 911 GT3 RS is even more optimized for track use than its predecessors. The spontaneously responsive, high-revving 4.0-liter six-cylinder boxer engine with approximately 500 [horsepower] has proven ideal for use at track days and club sport events. That’s why we focused primarily on aerodynamics and chassis questions in the development of the new 911 GT3 RS,” said Andreas Preuninger, the director of the GT model line, in a statement. In other words: The preview image released by Porsche is far from telling the car’s full story.