Cons: Antiquated infotainment; not as good to drive as Accord

It seems like only yesterday that the current Camry was introduced, yet here we are in the sixth model year since it received its more comprehensive and substantial overhaul in decades. In many ways, the 2023 Toyota Camry is just as strong a competitor as ever. It may not be quite as well-rounded and good to drive as a Honda Accord, nor is its technology and design as appealing as the Hyundai Sonata or Kia K5, but every Camry we’ve driven, from an LE rental car to a wing-wearing TRD, leaves us with the general impression of, “You know, this is a pretty good car. It’s easy to see why so many people buy them.” Among all those choices, we’d most recommend anything with the hybrid powertrain.

Of course, fewer people have been buying midsize sedans in general despite the segment offering such compelling entries, including the Camry, Accord, K5 and Sonata. SUVs are where it’s at now. Yet, there are very good reasons to stick with a sedan. They are generally more efficient, especially the hybrids. They will have larger back seats, with the added space between rows especially beneficial for fitting rear-facing car seats. They are also better to drive since they are lower to the ground and lighter. You obviously lose cargo versatility and elevated visiblity, but there’s absolutely a strong argument to be made that a Camry would be a better choice for many than a comparably priced RAV4. Now, would it be a better choice than a comparably priced Accord, K5 or Sonata? That would depend on the version you’re considering, but even if the answer is ultimately “no,” it would still be smart to check it out.

The Camry’s dark-trim Nightshade package has apparently been popular enough that Toyota is doubling down for 2023. It gets a new, exclusive color in Reservoir Blue to join Midnight Black and White, plus black-trimmed headlights and taillights, and 19-inch matte bronze wheels that are admittedly pretty cool. The Camry Nightshade is definitely not Grandma’s Camry. 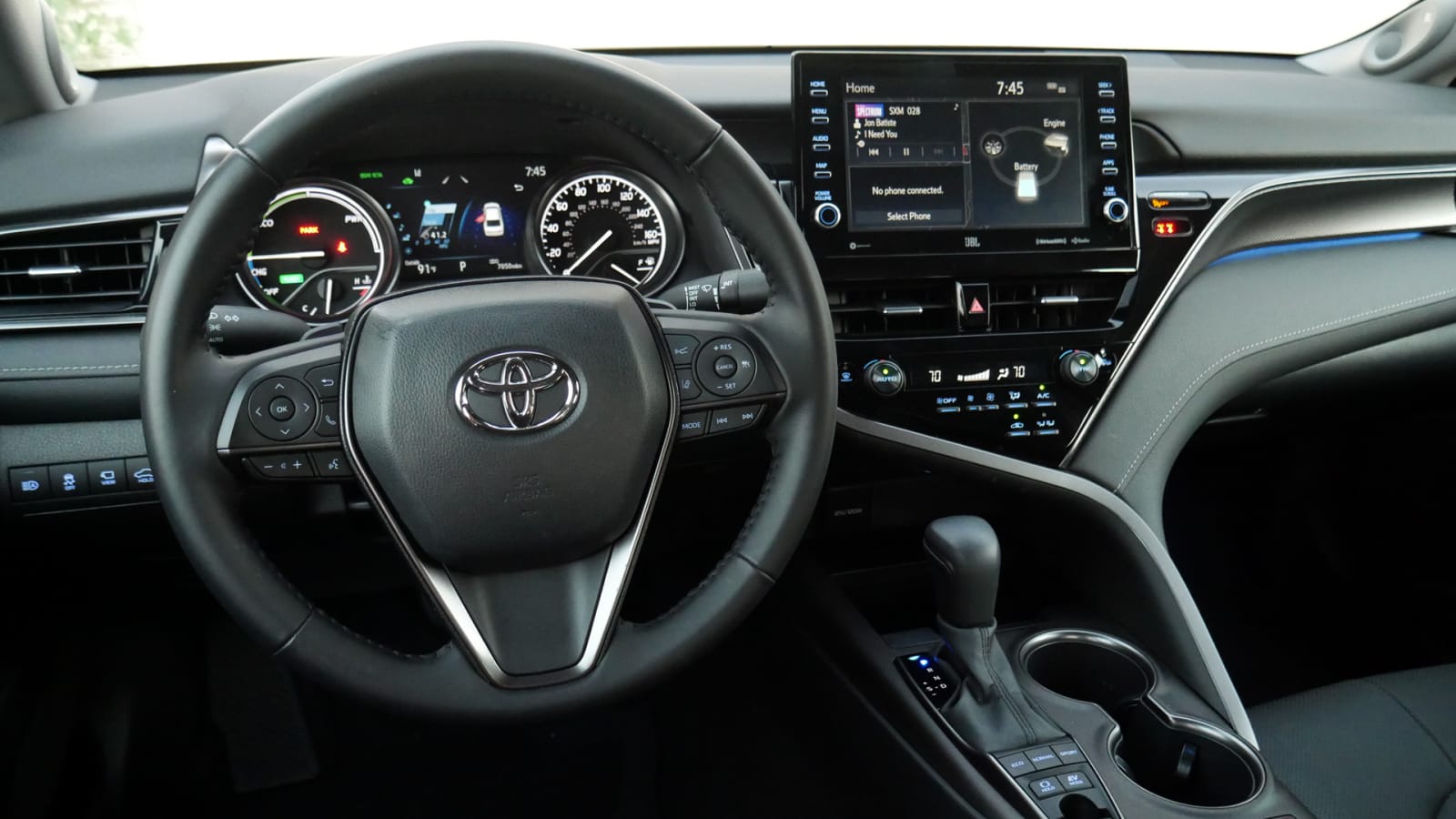 What are the Camry interior and in-car technology like?

The Camry interior is perhaps a little over-styled, but you can’t call it boring, and we like that Toyota shies away from large swaths of tacked-on fake wood or metal to carry the look. Quality is also above average, as there really isn’t much of drop-off in look, feel and general ambiance from a fancy XLE to the more entry-level LE. We also like the abundance of storage space in the doors, under the center armrest and in a voluminous two-tier smartphone bin.

After updates made two years ago, the infotainment screen grows out from the dash rather than being embedded within it. It’s not as clean looking as the previous version, but it does bring the screen closer to the driver’s line of vision, so it’s easier to check while driving. Both the standard 7-inch screen and available 9-inch unit share a common user interface, so you’re really only getting extra inches rather than different functionality. As such, what’s on either is a love-it-or-hate-it affair. Some will appreciate its simple layout, especially for the audio controls. Most, however, are likely to find it a bit slow and aesthetically behind the times. The infotainment systems in the Hyundai Sonata, Nissan Altima, Subaru Legacy and Honda Accord (in that order) are superior. 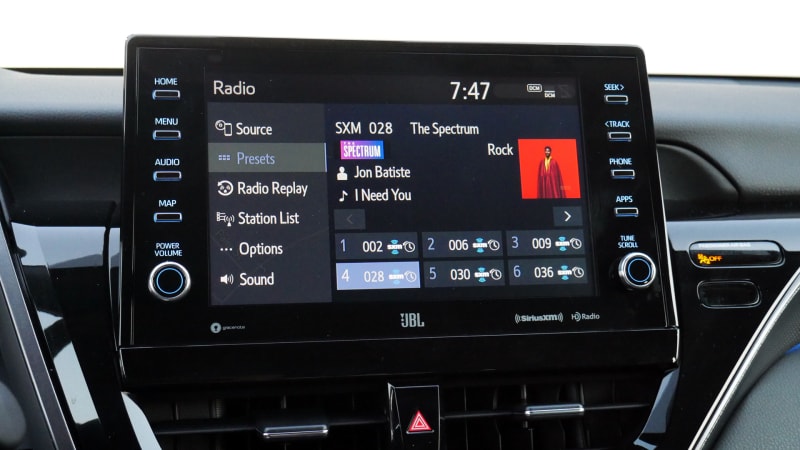 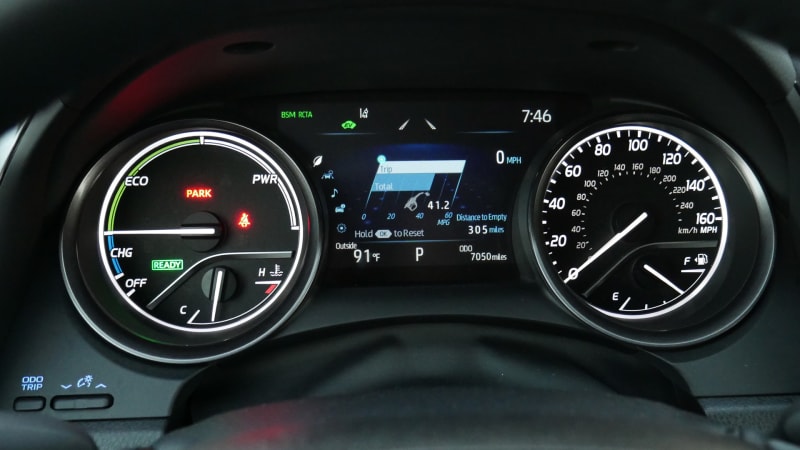 How big is the Camry?

If it weren’t for the colossal Honda Accord, the Toyota Camry would stand out for its interior space. The lowered roof of the latest generation may make some folks feel like they’re oddly close to the ceiling (especially with a sunroof), but headroom’s still OK, and legroom is abundant. Someone 6-foot-3 can even sit behind another without knees grazing the seatback. We also like that the latest Camry has a lower driver seating position than before, making it feel like you’re sitting in the car rather than on it. It’s just one of the many things done to this generation to make it feel more immersive and driver-focused.

The trunk offers 15.1 cubic-feet of space, which is less than an Accord or a Sonata. In comparison to the Accord in particular, the trunk is a bit narrower and not as deep. However, that says more about those other sedans than the Camry. The trunk’s still really big, with enough room for four roller bags and plenty left over. We can get a better feel for how much stuff the trunk can hold in our Camry luggage test cargo review.

It should also be noted that the all-wheel-drive and hybrid Camry models have the same trunk space as the regular front-drive versions, but the hybrid’s back seat is a smidgen higher since the battery resides underneath. This difference is unlikely to be noticed, however. 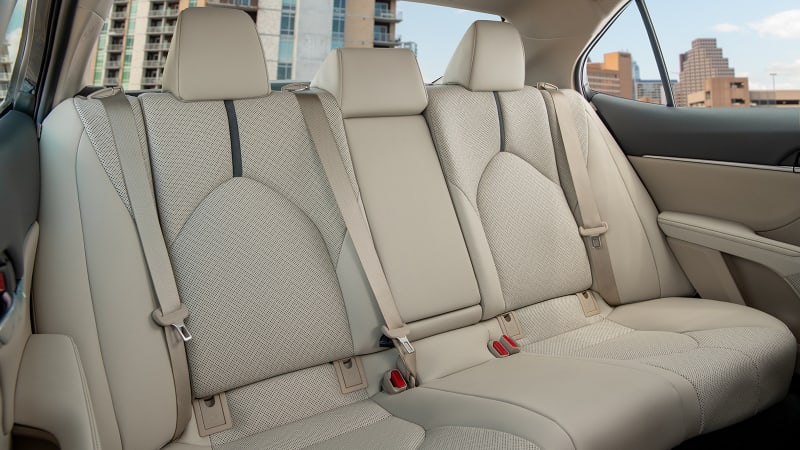 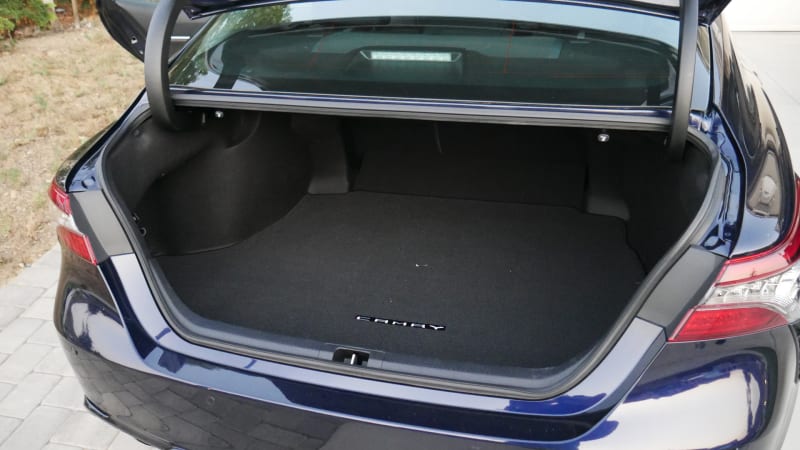 The 2023 Camry is available with the widest variety of powertrain options in the midsize sedan segment.

Things start with the 2.5-liter inline-four that produces 203 horsepower (best in class) and 184 pound-feet of torque when paired with front-wheel drive (206 hp and 186 lb-ft in the XSE). The optional all-wheel-drive system (AWD) reduces output by a tiny amount. An eight-speed automatic is standard.

Fuel economy estimates for 2023 were not available for any Camry at the time of this writing, but it’s unlikely they would’ve changed much, if any, since the final 2022 estimates presented here. Fuel economy for the base engine varies depending on trim level and drivetrain. The volume-selling LE and SE with front-wheel drive achieve an excellent 28 mpg city, 39 mpg highway and 32 mpg combined. The XLE and XSE take a minor hit at 31 mpg combined. All-wheel drive takes a further dive, especially on the highway, to 25/34/29 in the LE and SE (25/34/28 for the XLE and XSE AWD).

The optional 3.5-liter V6 is paired exclusively with front-wheel drive and the eight-speed automatic. It produces a whopping 301 horsepower and 267 pound-feet of torque. Unlike some turbocharged engines that require premium fuel to achieve max performance, the Camry’s V6 runs on regular. Fuel economy is still strong at 22 mpg city, 33 mpg highway and 26 mpg combined for the XLE. The XSE gets 22/32/26, and the TRD trim brings up the rear at 22/31/25.

Finally, the Camry Hybrid uses a pair of electric motors in conjunction with a four-cylinder engine. Together, they produce a combined 208 hp. By comparison, a Prius produces a mere 121 hp, yet the Camry achieves nearly the same fuel economy. The Camry Hybrid LE trim level returns 51 mpg city, 53 mpg highway and 52 mpg combined. The other trims are 44/47/46, a difference that isn’t as significant as the mpg figures make it seem. 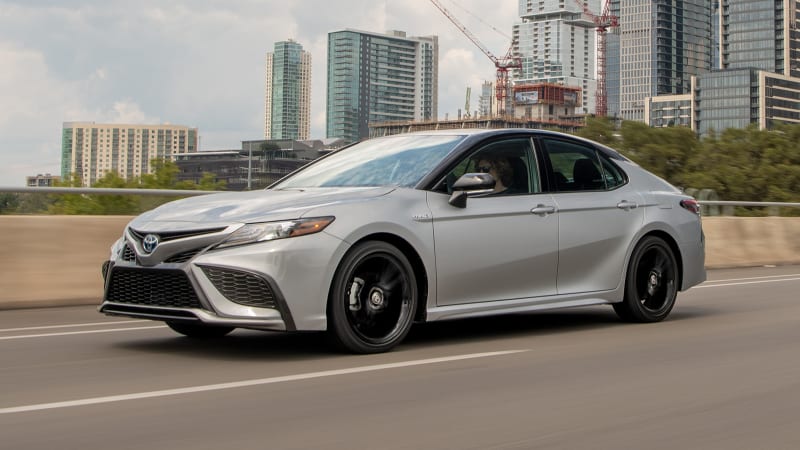 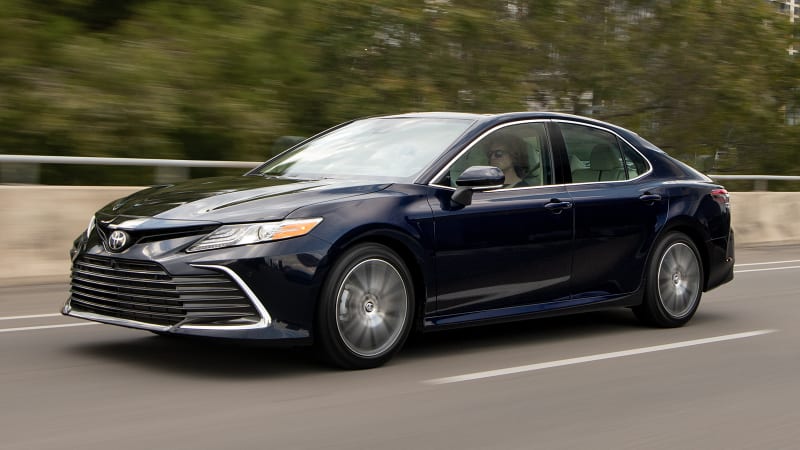 Forget all your pre-conceived notions of the Toyota Camry. It is a far more involving car than previous generations with sharper, more composed handling and pleasantly responsive steering. Everything gets a bit tighter in the SE and XSE trims (above left), but choosing them isn’t an absolute must any more for folks who like to drive. True, the Honda Accord remains a superior drivers’ car, but the Camry isn’t so far off.

In fact, the Camry TRD was seemingly made to make that very point, as it’s outfitted with track-tuned chassis components, a strengthened structure and enhanced steering to deliver handling that approaches sport sedan territory, at the expense of a less-forgiving ride.

The TRD comes standard with the muscular V6 engine that’s optional on other Camrys. No matter the trim, though, this is a strong, smooth engine that only gets better when you realize it matches the fuel economy of its turbocharged four-cylinder competitors. Of course, few people get the V6 (only 6%). The majority go for the base four-cylinder that offers best-in-class power, but when it’s compared to turbocharged engines, you’ll likely notice that it has less low-end grunt and sounds a bit winded when pushed. It’s certainly not Toyota’s most refined effort, although at least it has a capable partner in the smart eight-speed automatic that’s greatly superior to the CVTs found in most competitors. All of that pretty much carries over to the Camry AWD that’s only offered with the base four-cylinder.

Finally, there’s the Camry Hybrid, which we think is the pick of the litter. Its electric motor adds the low-end pull the base four-cylinder lacks, while also smoothing things out considerably. Furthermore, the battery’s placement under the back seat lowers the car’s center of gravity and lessens the front weight bias, making for improved dynamics around corners. A heavy right foot still results in a fair bit of droning from the powertrain (something you don’t get in the Hyundai Sonata Hybrid), but it is better than past Toyota hybrid efforts, as is the brake-pedal modulation. That you can now get it in the sportiest, more luxurious XSE guise is icing on the cake. 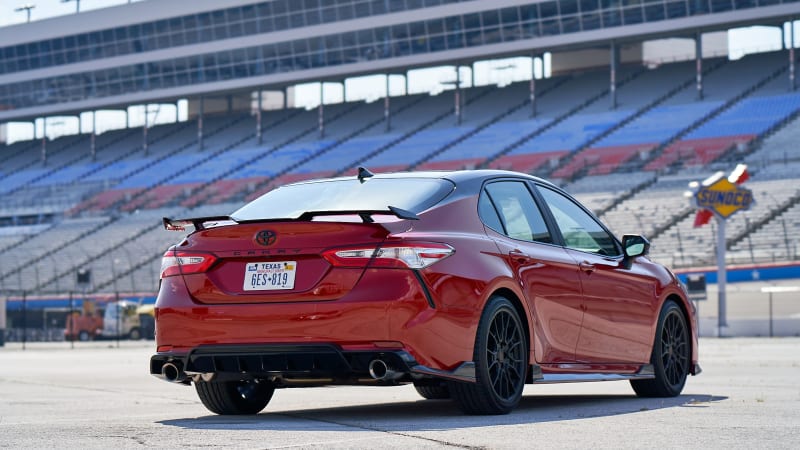 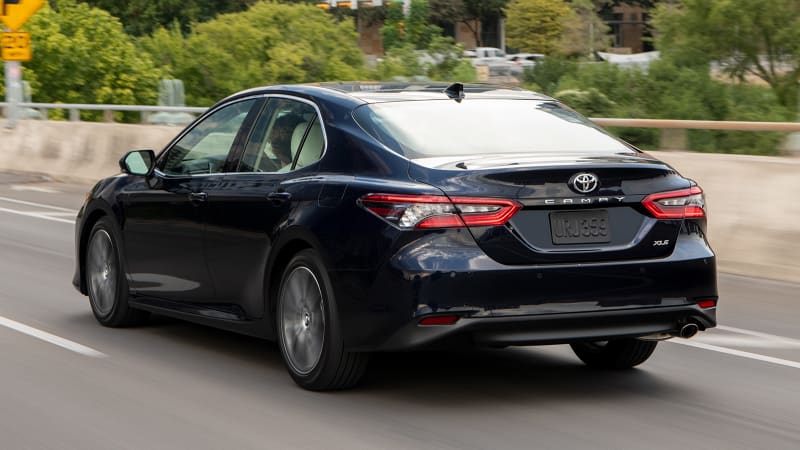 What other Toyota Camry reviews can I read?

What other Toyota Camry reviews can I read?

Our first drive of the all-wheel-drive Camry, including information about its engineering. You see, all-wheel drive wasn’t meant to be in the new Camry. Then things changed. 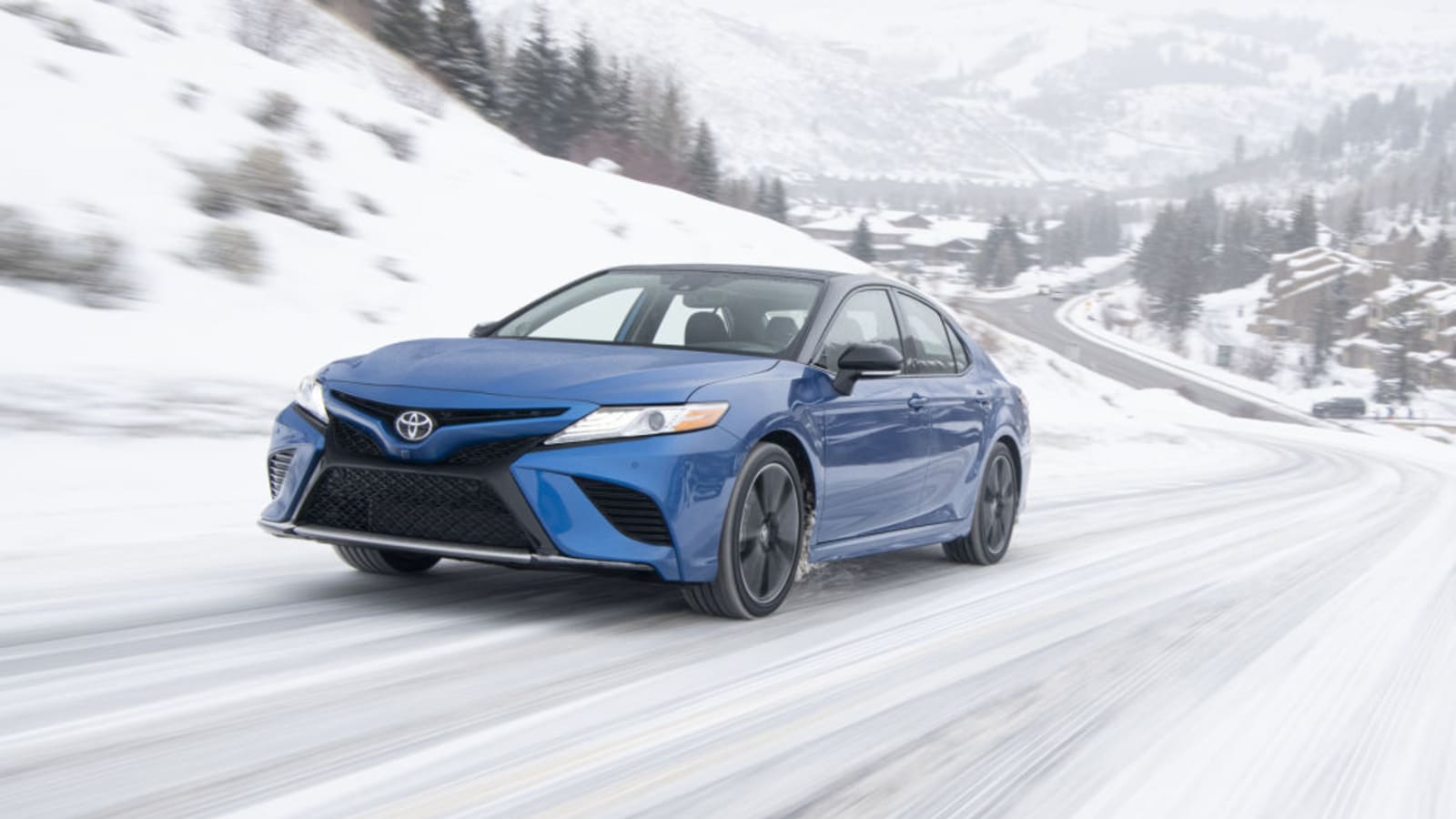 And now for something completely different … We take a spin around Texas Motor Speedway in the unlikeliest Camry, a high-performance one tuned by Toyota’s TRD wing. We later got a chance to drive it back at Autoblog HQ in Michigan. 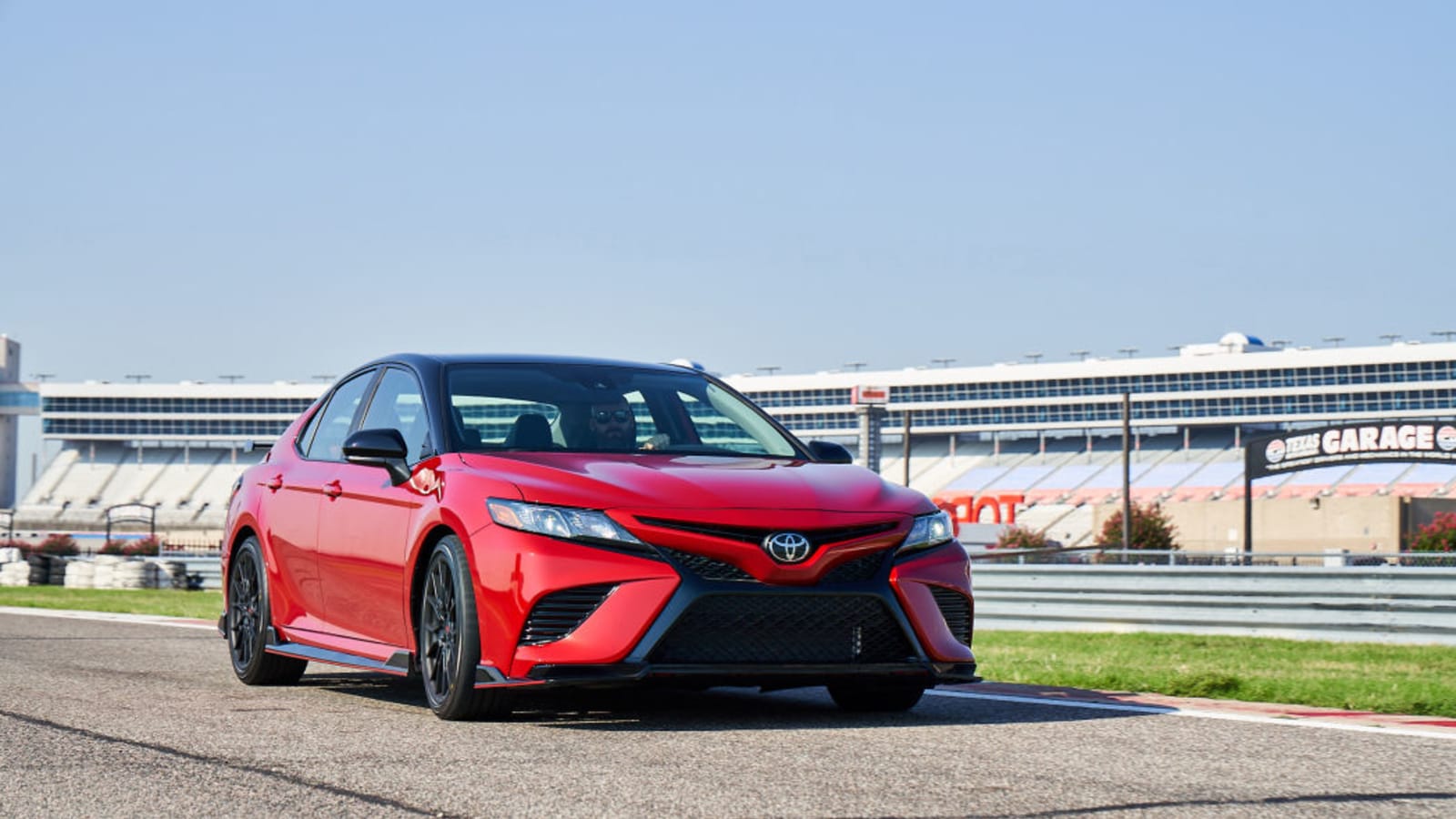 Toyota Camry Luggage Test | How much fits in the trunk?

We put the 15.1-cubic-foot Camry trunk to the real-world test by seeing how much luggage (and other stuff) we can fit in its trunk. 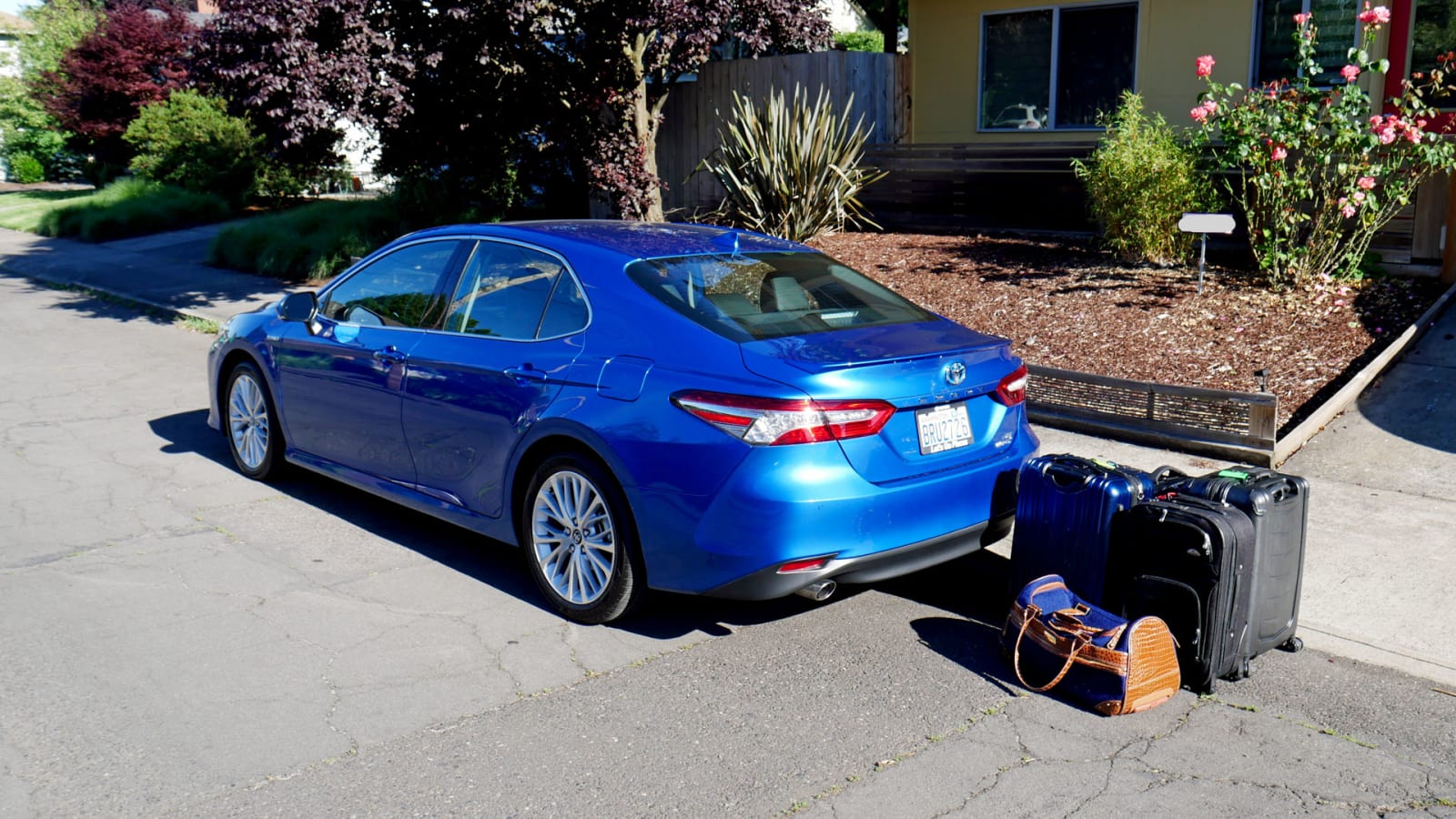 Unlike in the past, the base model Camry is actually very well equipped and interior quality doesn’t take a major hit. In fact, we’ve rented a Camry LE and came away impressed with how much car and equipment you get at the base level.

From the LE, the Camry lineup forks in multiple directions. The SE trims are sportier to look at and to drive, with their Nightshade variants (pictured below) adding darker trim and nifty bronze-colored wheels. The XSE slathers on extra convenience and luxury equipment onto the SE’s mechanical setup. The XLE basically takes those same convenience and luxury extras, but applies them to the LE’s design and more comfort-oriented setup. The TRD, meanwhile, is the wild child of the family, with a performance-oriented chassis and boy racer exterior add-ons that include a unique deck wing.

All prices below include the $1,095 destination charge. All-wheel drive is an option on the LE, SE, SE Nightshade, XLE and XSE when equipped with the base engine. 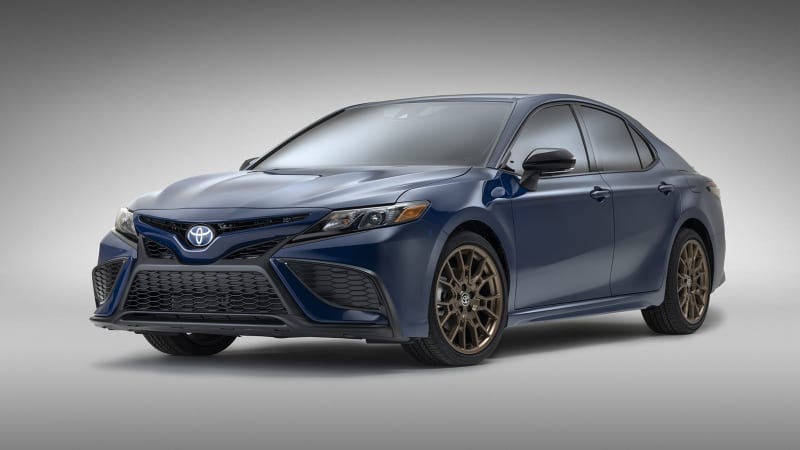 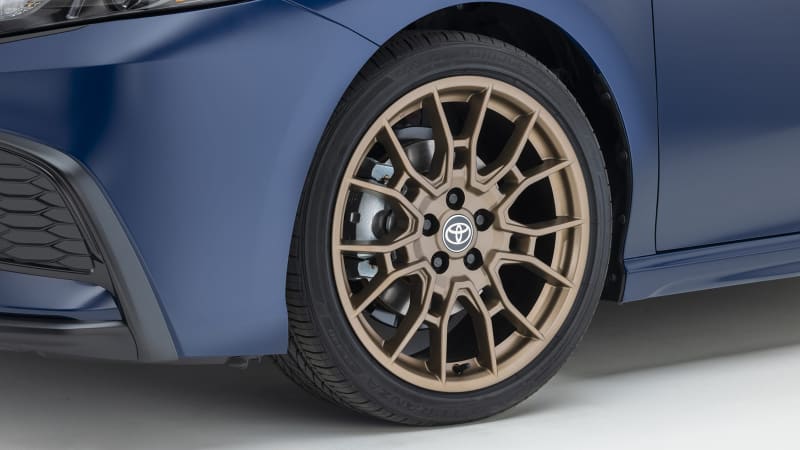 What are the Camry safety ratings and driver assistance features?

The Camry has earned very high crash test scores. It’s an IIHS Top Safety Pick + having earned the highest marks in all crash tests, for its collision prevention system and even LATCH child seat anchor access (we can confirm in our own testing that they’re very easy to use). Its headlights perform decently, too, with most of versions receiving the second-highest “Acceptable” rating, and XLE Hybrid’s adaptive headlights getting the top “Good” rating. NHTSA ranks the Camry highly, too, with an overall five-star rating, including five-star ratings for each individual crash test.