A new art exhibit coming to Los Angeles will pair classic Mercedes-Benz cars with Andy Warhol‘s depictions of Mercedes-Benz cars. Warhol is mainly known for his paintings of Campbell’s soup cans and silkscreened images of celebrities like Marylin Monroe. Right before his death in 1987, Mercedes commissioned Warhol to create a series of works around their automobiles. It was never completed, but visitors to the Petersen Museum will still be able to catch a glimpse of what could have been.

In 1986 Mercedes was getting ready to celebrate the 100th anniversary of Karl Benz’s Benz Patent Motorwagen. The three-wheeled motor carriage is widely considered the first internal combustion car, though some historical accounts raise issue with that claim. In any case, the automaker hired Warhol, a pioneer of the “pop art” movement, to help celebrate the history of the brand.

Warhol was meant to create 80 pictures of significant Mercedes models, starting with the Patent Motorwagen and the Daimler Motor Coach, also from 1886. Only eight models were finished, depicted in 36 silkscreen works and 13 drawings. 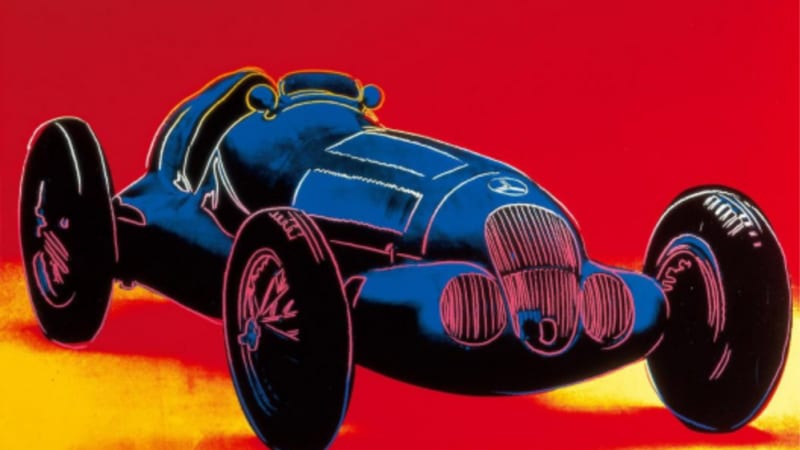 Among them are the Mercedes W125, a race car that won four Grands Prix in the 1937 season. Famously, it produced around 600 horsepower from its supercharged inline-eight, and a version of which reached a top speed of 268.9 mph with a streamlined body.

The 1954 Mercedes W196 was another Grand Prix racer, a descendant of the W125. Versions of it won two Grand Prix seasons in a row, in 1954 and 1955 with famed driver Juan Manuel Fangio behind the wheel (and Stirling Moss as runner up). It’s closely related to the 300 SLR Uhlenhaut Coupe that became the most expensive car ever sold earlier this year.

Last but not least, the exhibit also features a Mercedes C-111, a gull-winged experimental sports car powered by, in some versions, a mid-mounted rotary engine. Sixteen were built to test Mercedes technology, and the one in the display is powered by a V8. Sadly, it never made it to production.

Though incomplete, the works are pure Warhol. It’s common for artists and carmakers to collaborate today, but before Warhol it was unseemly for a true artist to revel in the commercial. He turned the art world on its ear with his Campbell’s soup cans, and in that vein the Mercedes commission doesn’t seem that far-fetched. After all, when asked what he loved most, according the authors of the book Andy Warhol, the artist replied, “Money.”