It’s hard to imagine now that Apple CarPlay is in 98% of new vehicles, but when the feature was first introduced in 2014 automakers worried about the data Apple – and Google with Android Auto – would be able to access. German automakers in particular expressed alarm and Toyota held off adding CarPlay until the 2019 model year, and Android Auto in 2020.

But because so many automakers’ own connected infotainment system failed miserably, CarPlay and Android Auto succeeded in making certain smartphone features available to drivers in a generally seamless way – and now there’s no putting the tech genie back in the bottle. With the latest version of CarPlay announced at WWDC 2022 in early June, Apple extends its reach further into the dashboard, taking over every screen in a car and making an even larger data grab. And automakers are once again wringing their hands – which could be tied at this point.

The updated version of CarPlay migrates Apple’s UI into digital instrument clusters and supplementary screens, and accesses vehicle data ranging from miles per hour to radio settings. An example Apple showed at WWDC in a video revealed CarPlay transforming an instrument cluster to use the tech giant’s own virtual gauges, adding widgets such as calendar alerts and weather info and is customizable via various Apple-designed layouts.

As with previous versions of CarPlay confined to the infotainment display, the system provides a consistent look and interface regardless of make or model – if companies support the latest version. In the video Apple said it’s “excited to bring this new vision of CarPlay to customers” and displayed the logos of several auto brands, adding it would announce specific vehicle implementation “late next year.”

Andrew Poliak, chief technical officer for tier-one supplier Panasonic Automotive Systems and a 20-plus-year veteran of the vehicle infotainment industry, believes Apple is concerned that its main tech and content rivals are making major inroads into cars. At CES this year both BMW and Stellantis revealed a relationship with Amazon to bring content into cars and Google announced partnerships with Volvo, GM and others. “Apple is trying to make their play into the hearts and minds of the vehicle dashboard,” he adds.

Poliak also notes Apple archrival Google has moved deeper into the dashboard with its Android Automotive Operating System (AAOS) that OEMs and tier-one can build (and is not to be confused with Android Auto). Poliak says that AAOS is “running infotainment and starting to be able to be part of a full solution in the instrument cluster,” although he adds that OEMs retain control of how data is collected and shared. AAOS is already in operation in Volvos, Polestars and some GM vehicles, including the Chevrolet Silverado. 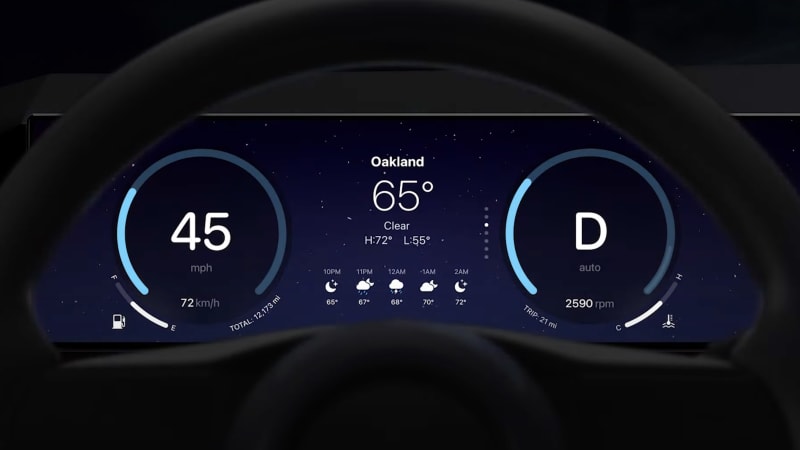 This doesn’t appear to be the case with Apple CarPlay, says Rob Passaro, an automotive tech and product management consultant who while at BMW led the co-development of iPod Out, the predecessor of CarPlay, with Apple in 2010. The new version of CarPlay seems to be a much deeper integration and accesses more car data than previous versions, he adds.

“The UI shown in the video displays previously unavailable access to native car info like engine RPM, coolant temperature, HVAC controls, broadcast radio controls and so on,” Passaro says. “Based on using this newly gained access to car data, the version of CarPlay can theoretically replace all the native OEM’s GUIs on any of the screens in the car – if the OEM allows it.”

Poliak says Apple’s “biggest potential challenge is probably the willingness of OEMs to open up vehicle interfaces to something that’s transitory and presents possible risks that another company will control.”

But Poliak says automakers are still the gatekeepers and Apple can only do more if they’re collaborating with OEMs. He adds that Apple likely won’t have the opportunity to do more than just the current version of CarPlay “without a direct and close collaboration with OEMs because OEMs need to understand what the phone can do and guarantee a certain experience to have the phone do more.”

But OEMs could be caught between the proverbial rock and a hard place. Passaro says that Apple’s CarPlay is “an inevitable evolution of the continued dominance of smartphones and their capabilities in everyone’s life.  The trick for OEMs will be how they maintain their own brand values while simultaneously giving users what they want, such as seamless integration of their digital lives,” he adds.

Passaro predicts that the better native OEM infotainment systems will fare well against CarPlay’s further encroachment, whereas OEMs who have terrible UIs and UX “will basically just have to hand over this major touchpoint of their brand to the Apples and Googles of the world.” But adds that “Google’s AAOS is geared towards enabling OEMs to build great native UIs while maintaining a strong and unique brand identity, so it will be a lot of fun to see how it plays out.” 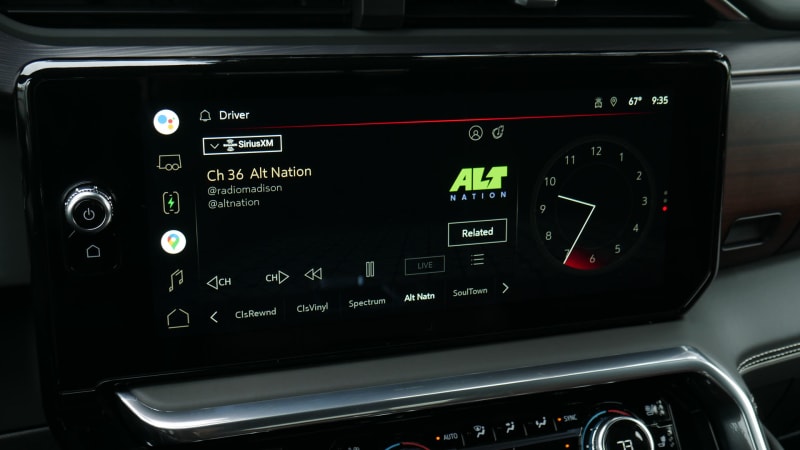 It could also cause more handwringing among OEMs, especially since CarPlay is now so entrenched in vehicles, which gives Apple more leverage, says Poliak. “Apple has such large market adoption that it’s possible they could change their terms of service to require more content to certify that device for use in a car,” he adds.

“I’m not saying Apple will do that,” he says. “That’s just another potential concern. OEMs are starting to give up so much real estate to the projection modes that it becomes very easy to change the terms of what is allowable as a certified Made for iPhone CarPlay device.”