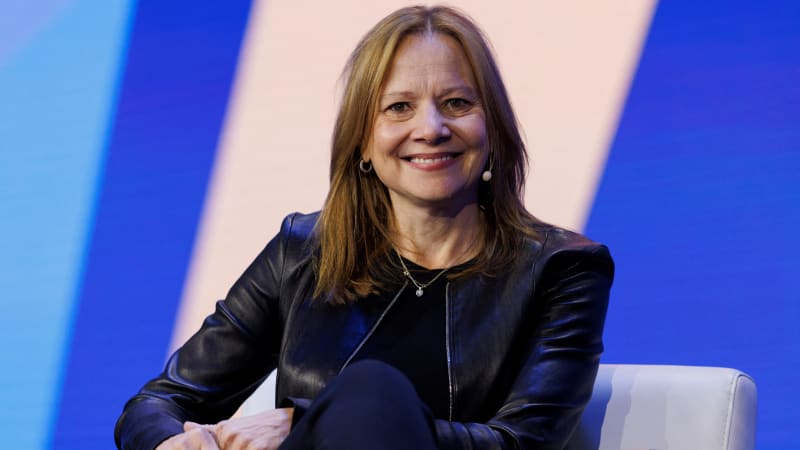 The landmark legislation President Joe Biden is counting on to motivate Americans to vote for Democrats in the upcoming midterm election has put Mary Barra in a somewhat awkward spot.

Significant support for automakers making the switch to electric vehicles and major changes to corporate taxation have pitted the automaker Barra leads against the powerful Washington lobby group she chairs. Fortunately for General Motors and unfortunately for the Business Roundtable, the bill would be such a boon to EVs that coming out clearly in favor of the Inflation Reduction Act was an easy decision.

Barra joined several other CEOs and labor leaders who met virtually with Biden on Thursday and endorsed the bill that would fund clean-energy investments by closing corporate-tax loopholes and making big corporations pay more. On the surface, at least, it appears GM and other automakers supporting the measure are accepting the plan’s 15% floor on their tax rate in exchange for federal help converting their plants, future models and sales to EVs. The bill would revive the $7,500 tax credit for GM, Toyota and Tesla and introduce a new $4,000 perk for consumers purchasing a cleaner used car. Other incentives include tax credits for domestic mineral production and EV battery manufacturing.

The tax portion is less welcome for big corporations, which explains why the Business Roundtable has vocally opposed the bill. GM and Ford are among companies that pay little in federal tax and could end up paying more. GM reported a tax expense of $20 million on almost $10 billion of income last year, and paid less than $100 million in years prior. Ford paid $102 million on almost $18 billion of income in 2021.

Both companies take advantage of legal and legitimate credit systems and loopholes. For GM, paying the full 15% minimum corporate tax on the $9.5 billion they made in the US would come to $1.4 billion.

As the bill stands, though, the 15% minimum tax isn’t actually a minimum. Companies can still pay below that because they would be allowed credits for research-and-development spending, defined benefit pension plans, past operating losses and foreign tax credits, according to Garrett Watson, senior policy analyst at the Tax Foundation, a Washington think tank. Corporate taxes likely will go up for many companies, he said, just not as much as the plan’s headline might suggest.

For GM, a potentially higher tax bill probably would be more than offset by a lot of perks. The company could certainly use EV tax credits to get back on equal footing with automakers that haven’t reached the 200,000-vehicle cap that GM, Tesla and Toyota have, which triggers the phase-out of current incentives. Next year, Barra will roll out electric versions of the Chevrolet Silverado pickup and Equinox and Blazer SUVs that could benefit from support from Uncle Sam.

What remains to be seen is how many models, if any, will be eligible for these credits right away. Automakers will need to hit certain benchmarks for how much of the materials and components in their batteries are sourced locally, or at least not from China and other countries of concern. Carmakers are pressing Congress to ease up on those requirements.

If the bill passes — crucially, Arizona Senator Kyrsten Sinema is now on board — automakers may end up racing to bring more of their battery supply chain to America, which is exactly what Biden wants. Barra said during Thursday’s roundtable that while “some of the goals cannot be achieved overnight,” GM is confident the significant investments it’s making “will establish the US as a global leader today and in the future.”