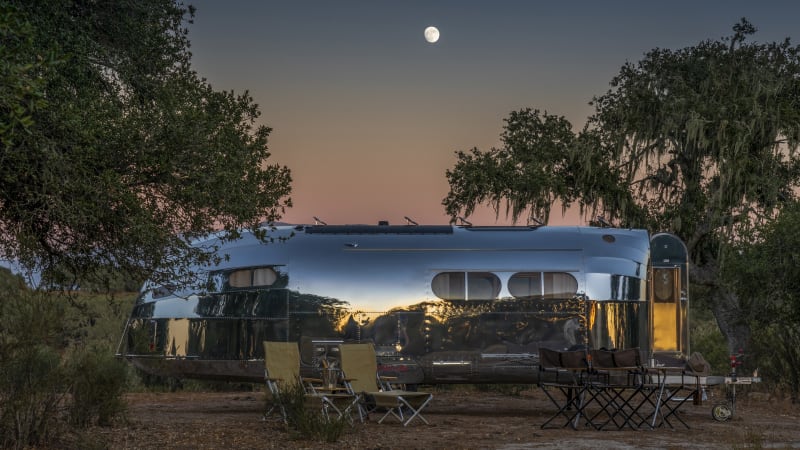 Luxury travel trailers are leveling up for 2023. A month ago, Living Vehicle introduced its updated range that comes with 1,400 watts of solar capacity and 14.4 kWh of storage capacity standard, and can be equipped with an air-to-water generator and the Creative Studio mobile office. Now Bowlus is here with its new Volterra model, a wholly electric trailer that can charge and be charged by a battery-electric vehicle. Main power is meant to come from a 480-watt solar array on the roof, which is two 240-watt AeroSolar panels curved to follow the Bowlus’ space-age lines. The PERC tech (passivated emitter and rear contact) in the panels is said to be 12% more efficient and much lighter than conventional solar cells. An MPPT solar controller manages energy flow to the 17-kWh lithium iron phosphate battery bank, that storage capacity more than doubling the 8 kWh capacity in the Bowlus Terra Firma model. Off-gridders who want faster energy intake can get two supplemental suitcase solar panels providing another 480 watts.

In an emergency, Bowlus says the Volterra can contribute up to 65 miles of range to a battery-electric vehicle using the trailer’s 20-amp outlet, but that figure would depend on the size of the pack in the EV. Flow goes the other way, too, because “the electric connection to one’s EV while driving continuously re-charges your Bowlus while you drive.” That exchange happens though the seven-pin trailer connector, and it happens no matter whether the tow vehicle is electric or ICE-powered. We should also note that an EV pulling the Bowlus will have it much easier than an EV pulling some other luxury trailers. Bowlus says the Volterra’s dry weight is a mere 3,250 pounds. Compare that to a 29-foot Airstream Globetrotter putting 6,300 pounds on the scales, or the aforementioned 29-foot Living Trailer Core that offers 1,320 watts of solar capacity and 14.4-kWh of storage capacity but weighs 12,000 pounds.

The key to cutting the propane cord in most instances is an induction cooktop. Side benefits of that addition are more precise temperature control than a gas stove and less ambient heat produced by the cooktop’s heating surface. However, because climate doesn’t always cooperate away from shore power, the trailer comes with a 17-pound backup propane tank for when the HVAC has to work overtime to keep the living quarters livable.

The long list of luxury bugout conveniences include heated floors and premium furnishings. Bowlus touts the ability to hook up high-speed Starlink Internet, but anyone who wants to take advantage of another one of Elon Musk’s side gigs is able to do that in any vehicle. The go-to in the Bowlus is an embedded 3G/4G LTE SIM card providing data service closer to the metropolis. A rechargeable, full-color, night vision backup camera sends images to Android and Apple phones when it’s time to park up. Fresh water capacity is up by 150% to 50 gallons, gray water capacity up 50% to 31 gallons. There’s a limited-edition California-themed color palette for the vegan upholstery surfaces and linen bedding, too, inspired by the Earth tones of Golden State mountains and sunsets.

The Volterra can be ordered now, the price starting at $310,000 to sleep four in sun-powered luxury.