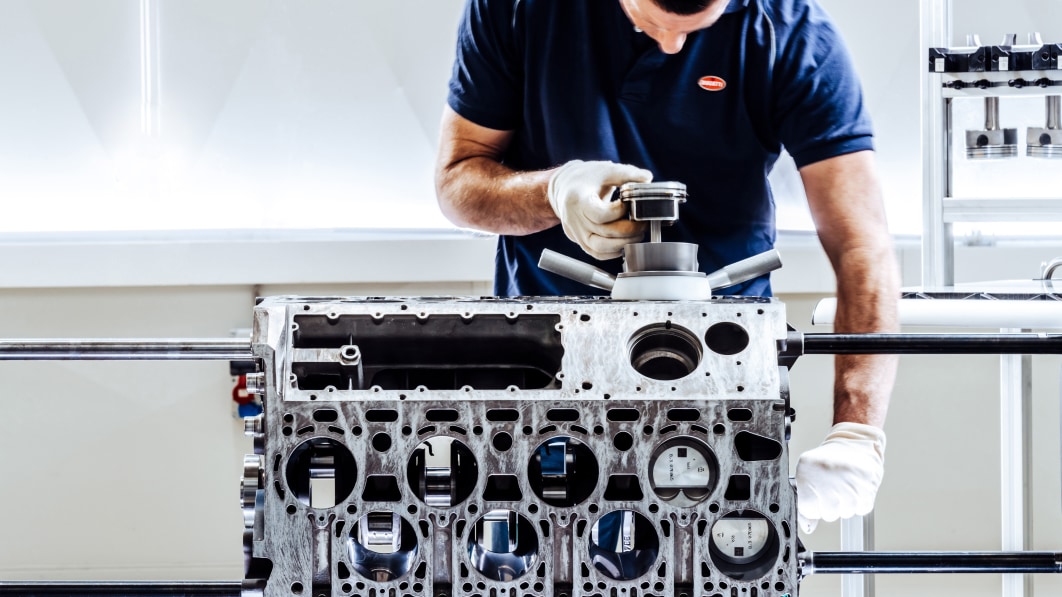 As the end of the Chiron’s production run nears, Bugatti is taking a look back at the W16 engine that has powered its cars since it returned to the scene nearly 20 years ago. The engine is relatively compact, hugely powerful, and it has helped the firm set several world records.

Former Volkswagen boss Ferdinand Karl Piëch knew that successfully reviving Bugatti required building a car that stood out from everything else on the road at the time. He initially planned to power the then-upcoming Veyron with an 18-cylinder engine and sketched it out on an envelope while riding on a high-speed train from Tokyo to Osaka in Japan in 1997. His concept later became a 16-cylinder engine, but dropping a pair of cylinders didn’t make the unit easier to develop. Bugatti engineers started from scratch in order to make the W16 a reality.

“We had to engage in basic development for every component; every vehicle part had to be constructed anew and tested — even the engine test bench. The only thing we didn’t change was the pencils we used for drawing,” said former Bugatti head of technical development Gregor Gries. The initial goal was to launch the Veyron with over 1,000 horsepower, and even some insiders doubted that this could be achieved.

Engineers faced several significant challenges during the Veyron’s development process. Getting the W16 to make 1,000 horsepower wasn’t one; it broke the symbolic barrier the first time it was put on a test bench in 2001. Keeping its temperature in check required designing a massive cooling system that takes over 10 gallons of coolant and installing a titanium exhaust system. With the engine ready to go, Bugatti turned its attention to creating a car capable of coping with 1,000 horsepower, both in terms of comfort and in terms of aerodynamics.

“Back then, there was no literature or empirical data for production engines with more than 12 cylinders or for production vehicles that could go faster than 217 mph,” said Karl-Heinz Neumann, Volkswagen’s former head of engine development. “One thing proved to be a particular headache: the car had to stay grounded, its power had to stay on the road, which isn’t easy at these speeds.”

Unsurprisingly, building the Chiron’s W16 engine is a meticulous and time-consuming process. Bugatti explains that the engine is made in a special room within the plant that Volkswagen operates in Salzgitter, Germany. Two technicians spend no less than six days assembling the 3,712 individual parts that make up the engine. When it’s completed, the W16 is shipped to the Bugatti plant in Molsheim, France.

What’s next? Your guess is as good as ours. Bugatti notes that the W16 is “the last of its kind,” which suggests (but doesn’t confirm) that the end is near for the engine. The company is now under the same roof as Croatia-based Rimac, but that doesn’t mean the Chiron’s successor will go electric. “[The car] will be heavily electrified, but we’ll have a very attractive combustion engine,” said Mate Rimac in March 2022.