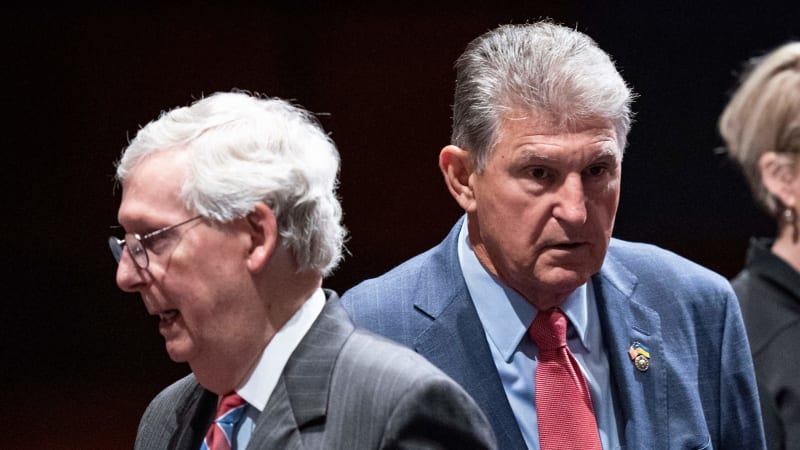 WASHINGTON — Five weeks ago, senior Biden administration aides gathered for their regular Thursday morning meeting about passing a bill to revive the U.S. computer chip sector, worried that it could be in peril. After 18 months, the bipartisan effort to provide $52 billion for semiconductors was getting close to the finish line. But they were concerned that Senate Republican Leader Mitch McConnell might block it.

This was not just another would-be-nice bill. Many in the meeting had sat through multiple Situation Room briefings about frightening scenarios if the deal stalled. They had come to believe the very trajectory of the economy and national security was at stake.

The billions for computer chips and scientific research, they argued, could help to cut inflation, create new factory jobs, defend the U.S. and its allies and preserve an edge against an ambitious and aggressive China.

More than 90% of advanced chips come from Taiwan. Should Taiwan be invaded or shipping channels closed, the U.S. and much of the world would face a cascading economic crisis and find the weapon systems meant to defend their citizens impossible to maintain and update.

The Biden team resolved to ignore any possible McConnell threats as a “false choice” and keep working with Republican senators who had backed the bill, like John Cornyn of Texas, Todd Young of Indiana and Roger Wicker of Mississippi.

Brian Deese, director of the White House National Economic Council, recalled the sentiment coming out of the meeting: “There’s been too much progress, too much trust and there’s too much at stake” to see the effort stall now. “We’re going to keep our heads down and drive forward.”

Just hours later, McConnell vowed on Twitter that the semiconductor bill would be dead if Democratic senators tried to push through a separate “Inflation Reduction” budget and domestic spending package on a party-line vote.

But the Kentucky senator’s gambit would ultimately fail.

President Joe Biden will soon sign into law the $280 billion CHIPS and Science Act — which also includes substantial money for scientific research. The event has been delayed by Biden’s rebound case of COVID-19. This account of how the bill came together draws from interviews with 11 Biden administration and congressional officials, most of whom spoke on condition of anonymity to discuss private conversations.

The back story reveals the complexities of bipartisanship, even when all sides agree on the need to act.

McConnell threatened to block the semiconductor investment even though he supported the idea, hoping to head off separate Democratic legislation. Biden’s team took the unusual step of enlisting former members of the Trump administration — a group generally reviled by Democrats — to find Republican votes. There were GOP lawmakers such as Oklahoma Rep. Frank Lucas who helped craft the bill but ultimately felt obligated to vote against it, displeased by the Democratic tax increases and spending that could soon follow.

“House Republicans have been working in good faith this entire time to come to consensus legislation that can be passed by both chambers,” Lucas said in speech to the House last week. “But time and time again, we’ve been thwarted as Democratic leadership has moved the goalposts, shut down the process, and chosen their divisive, partisan policies.”

For most of the process, the technical nature of computer chips and scientific research meant that the talks could occur beyond the din of partisan squabbling. Both sides knew that government-funded research after World War II eventually led to the internet, MRIs, coronavirus vaccines and other innovations that shape today’s world. It was only toward the end, as success neared, that the politics were publicly amplified.

As administration officials see it, the bill cleared Congress last week because of a deep coalition and unrelenting persistence. But as many Republicans interpret events, they provided key support, then got double-crossed.

But four hours after the chips bill passed the Senate on July 27, Manchin announced a major deal with Senate Democratic Leader Chuck Schumer. There was $369 billion to fight climate change, a 15% minimum corporate tax, a lowering of prescription drug prices and some $300 billion in deficit reduction — the kind of package McConnell had wanted to stop. It also threw Republican support in the House into doubt.

In the end, though, Democrats still got help passing the bill from 24 Republicans, some of whom said it was vital to protect national security.

18 months in the making

The process had begun 18 months earlier in an Oval Office meeting with lawmakers on Feb. 25 of last year, just a month into Biden’s presidency. The National Defense Authorization Act had approved investing in semiconductor development, but Congress still had to appropriate the money to make it happen and a bipartisan group was urging the president to help.

“I’m 100% for that, but we need to do more than that,” Biden told them, believing that supply chains needed to be strengthened as well.

The issue stayed largely in the background as the president pushed a $1.9 trillion coronavirus relief package through Congress in March 2021, then turned his attention to bipartisan infrastructure talks and an expansive domestic agenda that the White House called “Build Back Better.”

But the risks from computer chip shortages became clearer in the spring and summer of 2021 as inflation kept rising. A Commerce Department survey from September 2021 showed that manufacturers were down on average to just a five-day supply of chips, compared with 40 days before the pandemic.

On June 8, 2021, the Senate passed its version of the semiconductor bill and the House followed suit eight months later. But there were key differences that would have to be reconciled by a joint conference committee.

Hoping to keep up the pressure this year, Biden used his State of the Union address in March to highlight an announcement by Intel to invest $20 billion for what could be eight semiconductor plants outside Columbus, Ohio — a commitment that was contingent on final passage of the bill. Biden called Intel’s planned 1,000-acre (400 hectare) site a “field of dreams” on which “America’s future will be built.”

Deese and Commerce Secretary Gina Raimondo intensified their outreach after the speech. Internal White House records show 85 meetings and events involving companies and stakeholders since the start of this year, with a focus on the end-users of chips and equipment manufacturers and dealers. Starting in March, senior aides — including White House chief of staff Ron Klain, legislative affairs director Louisa Terrell, Deese, Raimondo and, occasionally, national security adviser Jake Sullivan — began their Thursday morning strategy meetings on the initiative.

The commerce secretary decided to cold call Mike Pompeo, Trump’s former secretary of state, who had been openly critical of Biden in a February speech, vowing “we’re making sure he doesn’t own a single branch of government.”

“I’m always happy to help a fellow Italian,” Raimondo recalled Pompeo saying after she asked for his assistance. Representatives for Pompeo did not respond to requests about this exchange.

By Raimondo’s count, she had 250 meetings with businesses and outside groups and roughly 300 meetings or calls with lawmakers on the bill over 18 months.

‘We’ve got to build this in America’

Meanwhile, Russia’s invasion of Ukraine had worsened inflationary pressures around the world as energy and food costs shot up, a reminder of the havoc that would occur if access to semiconductors was further disrupted.

Biden felt the pressure to have more domestic production as he toured in May the world’s largest semiconductor facility —a Samsung campus in South Korea with buildings decorated in the geometric colors of the Dutch painter Piet Mondrian and nearly as tall as the U.S. Capitol dome, their interiors clean and futuristic.

But then Intel announced in late June that it would postpone the groundbreaking for its Ohio plant because the bill had not passed. Then McConnell decided to halt negotiations with a tweet on the last day of June. Several days later, France announced a new semiconductor plant made possible by the European Union’s own $43.8 billion investment in chip production.

Raimondo felt a pit in her stomach after learning of McConnell’s tweet but kept working the phones that weekend with Republicans.

“There has to be a way,” she said. “Should we make the bill smaller? Would he go for just chips? You know, just constant engagement.”

The Senate ultimately passed the bill when it appeared the separate Democratic agenda package was going nowhere. But after Manchin revived it with his Schumer deal last week, House Republicans mounted a last-minute push to stop the chips bill. White House officials kept calling lawmakers and it passed as a bipartisan win.

“I feel great about America today,” Raimondo said after the vote. “It takes a little bit longer than it should, a lot more drama than you would like, but it happens.”

Some Republicans were bitter. Texas Sen. Cornyn had warned of a recession if the U.S. lost access to advanced computer chips and had been a driving force behind the bill, yet he felt that Manchin had undermined the ability to negotiate in good faith.

“That trust was eviscerated,” he said in a floor speech.

Biden got handed a note that the House had passed the bill while he was in a meeting with CEOs. He announced the news to applause and then, with plenty of additional work to do on the economy, moved the conversation on.

“Sorry for the interruption,” he said.