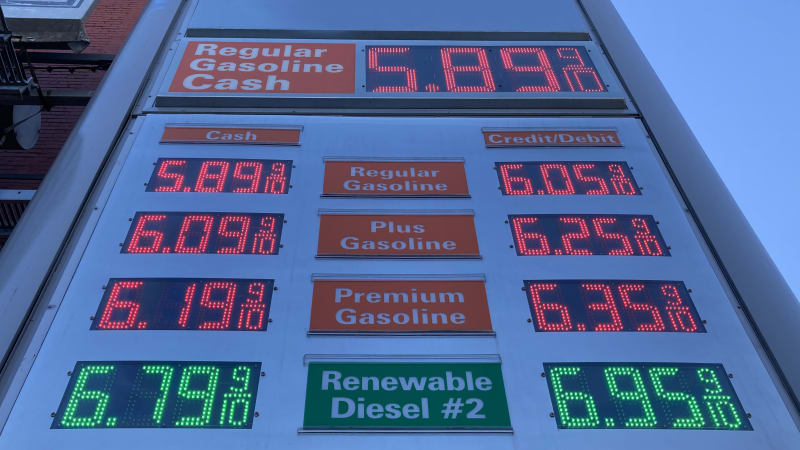 California’s pump prices dropped below $6 per gallon for the first time since May as pooling stockpiles point to cooling demand.

Gasoline pump prices fell by 20 cents per gallon over the past week in California, faster than every other state beside Arizona and Texas, according to AAA. Overall U.S. gasoline demand has been sliding, but it’s even more pronounced in the state where prices are consistently highest in the country and where more people drive electric cars.

The state’s seasonal gasoline stockpiles have climbed to 23% above the five-year average despite refinery production lagging 8% from prior-year norms. The rest of the country is starting to look more similar to California — last week saw the biggest national gasoline stockpile build since January while implied demand fell to its lowest seasonal level since 1996, following the high-demand July 4 holiday period.

Nationwide, the average price of a gallon of unleaded stood at $4.60 on Thursday, down 41 cents from the month-ago price of $5.01.

California “mobility has slipped below year-ago levels since early June and is roughly down 4%,” ESAI analyst Linda Giesecke said in an email. Apply that to the entire West Coast, and gasoline demand in June was probably 1.5 million barrels a day in June compared with 1.6 million a year ago, she said.

This suggests that demand has been decreasing in the region, “with high fuel prices possibly playing a role,” said Chris Higginbotham, a spokesperson for the U.S. Energy Information Administration, in an email to Bloomberg.

In the Los Angeles wholesale market, prices for the boutique gasoline required by the state fell to a discount to Nymex futures for the first time since January in the past week. This could hasten the rate of decline in regional retail prices.