SEATTLE — Authorities say an automobile and passenger ferry crashed into a dock Thursday in Seattle, damaging the vessel.

Washington State Ferries tweeted that no injuries were reported but passengers said some vehicles were damaged. The state agency said the Cathlamet ferry, which was traveling from Vashon Island to a dock in the West Seattle neighborhood, sustained “significant damage.”

The Seattle Times reports the left top part of the vessel was crumpled. The boat was docked and by 9 a.m., the last vehicles had been brought off the boat.

No information about how the crash occurred has been released.

West Seattle resident Jack Walsh said he heard the crash around 8 a.m., describing it as a “combination of a small explosion and screeching” that lasted about five seconds.

Anne Gfeller Higuera was on the ferry. Her car was parked on the upper deck. As the ferry pulled into the Fauntleroy dock, she didn’t notice anything out of the ordinary. But then she told the newspaper she heard an “enormous noise” in front of her that kept getting worse. 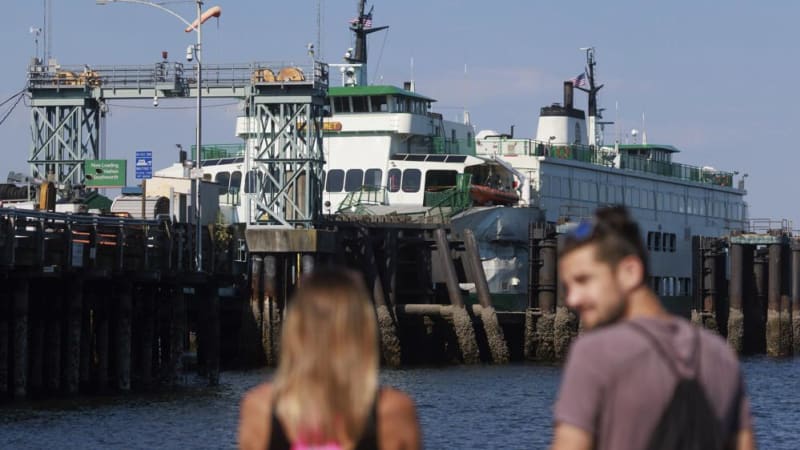 “There was a lot of concrete dust,” she said. When she looked up, she saw the side of the boat had been crushed and several cars in front of her were severely damaged.

Vashon resident Oskar Weiss, 17, told the Times he was commuting when “out of nowhere there was just a huge boom.” His said his car felt like it slid on the car deck. “I thought that we were going to go on the shore because it seemed like we weren’t slowing down.”

U.S. Coast Guard Petty Officer Steve Strohmaier said officers from the Puget Sound sector deployed to the scene shortly after they were notified of the crash around 8:20 a.m. They have begun investigating the cause and whether it was mechanical or human error.

The vessel involved in the crash, the Cathlamet, is 328 feet long and can carry up to 124 vehicles and 1,200 passengers.