DETROIT — General Motors Co’s electric Chevy Blazer SUV will be vital to the automaker’s effort to catch Tesla Inc in the U.S. EV market, but by the time it hits showrooms next year it will be fighting a crowd of vehicles to run second in a segment dominated by Tesla’s Model Y.

The traffic jam over the next several years in the electric SUV segment could define winners and losers in the U.S. auto market for years to come.

The U.S. electric SUV market segment is projected to more than double in size to 2 million vehicles annually by 2026, according to AutoForecast Solutions, which tracks automakers’ future production plans. However, more than 90 models could be competing for very small slices of that pie, AutoForecast Solutions and other analysts said.

Tesla’s Model Y is by far the best-selling electric SUV today, and most analysts expect that to remain the case four years from now.

LMC Automotive predicts that by 2025, the Model Y will account for 15.6% of a compact and mid-sized electric SUV segment of 13 vehicles, including Ford’s Mustang Mach-E, the Hyundai Ioniq 5, and Rivian’s future R2S compact SUV. Chevy’s Blazer is forecast to be in second place, but with only 6.6% of the segment’s sales. 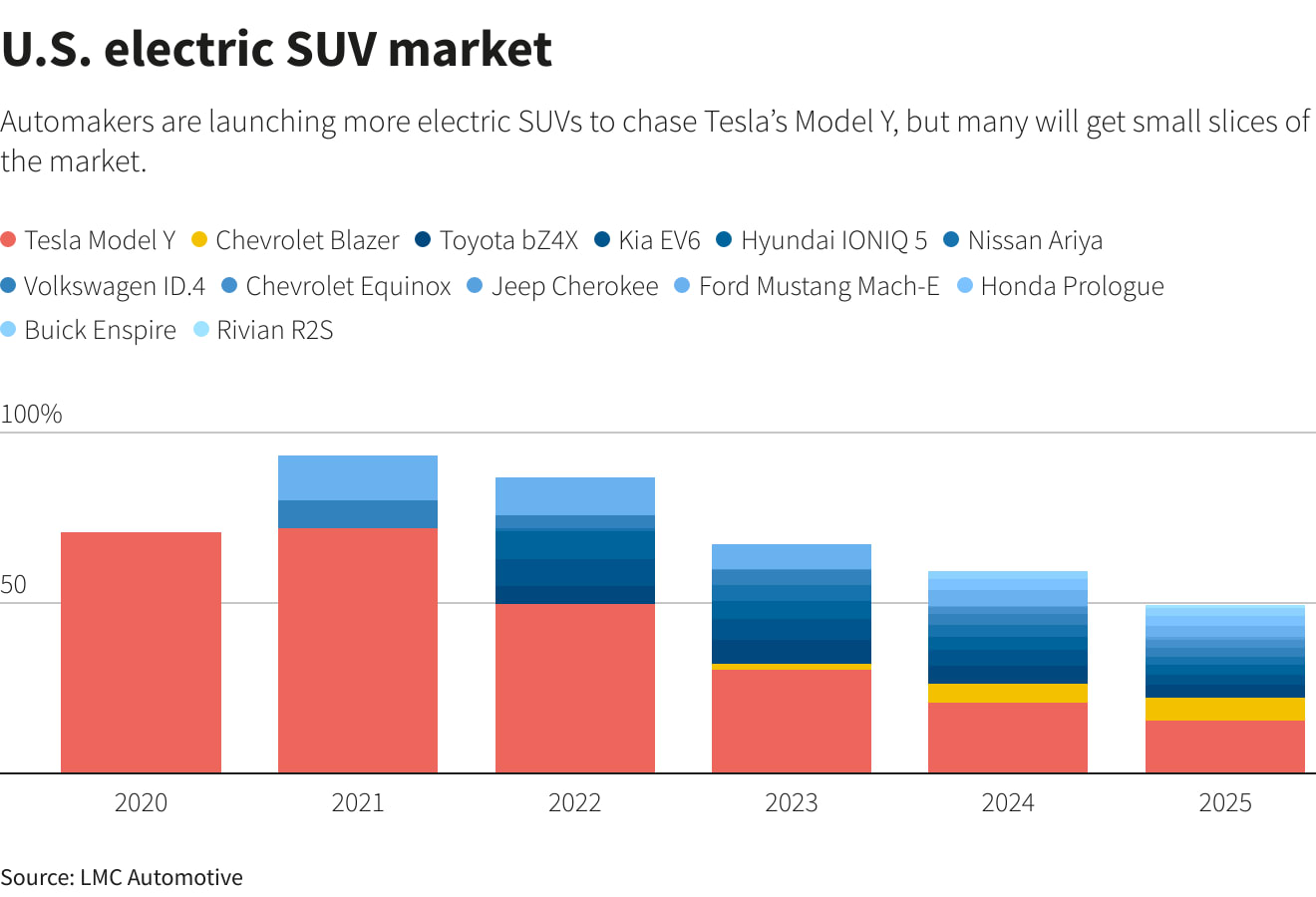 “The profitability of the SUV segment is likely to decline materially over time as competition intensifies,” Murphy wrote.

Facing this competitive challenge, Chevrolet dealers will start taking customer reservations for the electric Blazer on July 18, months ahead of the promised Spring 2023 arrival of the vehicles.

Brad Sowers, owner of Jim Butler Auto group, which includes three Chevrolet stores in Missouri, said customers are already asking about the electric Blazer, and the electric Equinox SUV that GM has said will start at $30,000 — about half the price of a Model Y. Sowers expects the Blazer’s price to start at $36,000.

“It’s interesting for me because I’m in the Midwest, definitely not the early adopters of anything. But I will tell you that I think people are excited about not just the Blazer but also the Equinox,” Sowers said.

GM Chief Executive Mary Barra is aiming to deliver 400,000 new electric vehicles in North America in 2022 and 2023. Successful launches for the Blazer and the Equinox will be essential to hitting that goal.

So far this year, GM is trailing not just Tesla but Ford and Hyundai in the U.S. electric vehicle market. GM’s best-selling EV, the Chevy Bolt, was out of production for months because of a battery recall. Production of newer EV models including the GMC Hummer EV, Cadillac Lyriq and electric Chevrolet Silverado pickup is just starting.

GM’s decision to start promoting the electric Blazer so far before its launch could help Chevy dealers “keep the buzz going” as Ford and other brands rev up sales of new EVs they have today, Chevy dealers said.

“This is to keep the interest going in the EV space with respect to the Chevy brand since we’re really stuck with a vehicle we can’t really sell in the Bolt EV,” said Steve Hurley, managing partner at Stingray Chevrolet in Plant City, Florida, east of Tampa.

(Reporting By Joe White and Ben Klayman in Detroit; Editing by Nick Zieminski)