Chevy has mostly revealed its newest Blazer, which, like many before it, goes in a unique new direction. It’s going fully electric, and it will be offered in front-, rear- and all-wheel drive versions, all with a focus on on-road driving and performance. But as it turns out, big Blazer changes aren’t all that unusual for the nameplate. It started as a full-size truck-based two-door, but since then, it sprouted smaller models, four-door models, and of course the current pavement-pounding model. Let’s take you through the Blazer’s interesting history. 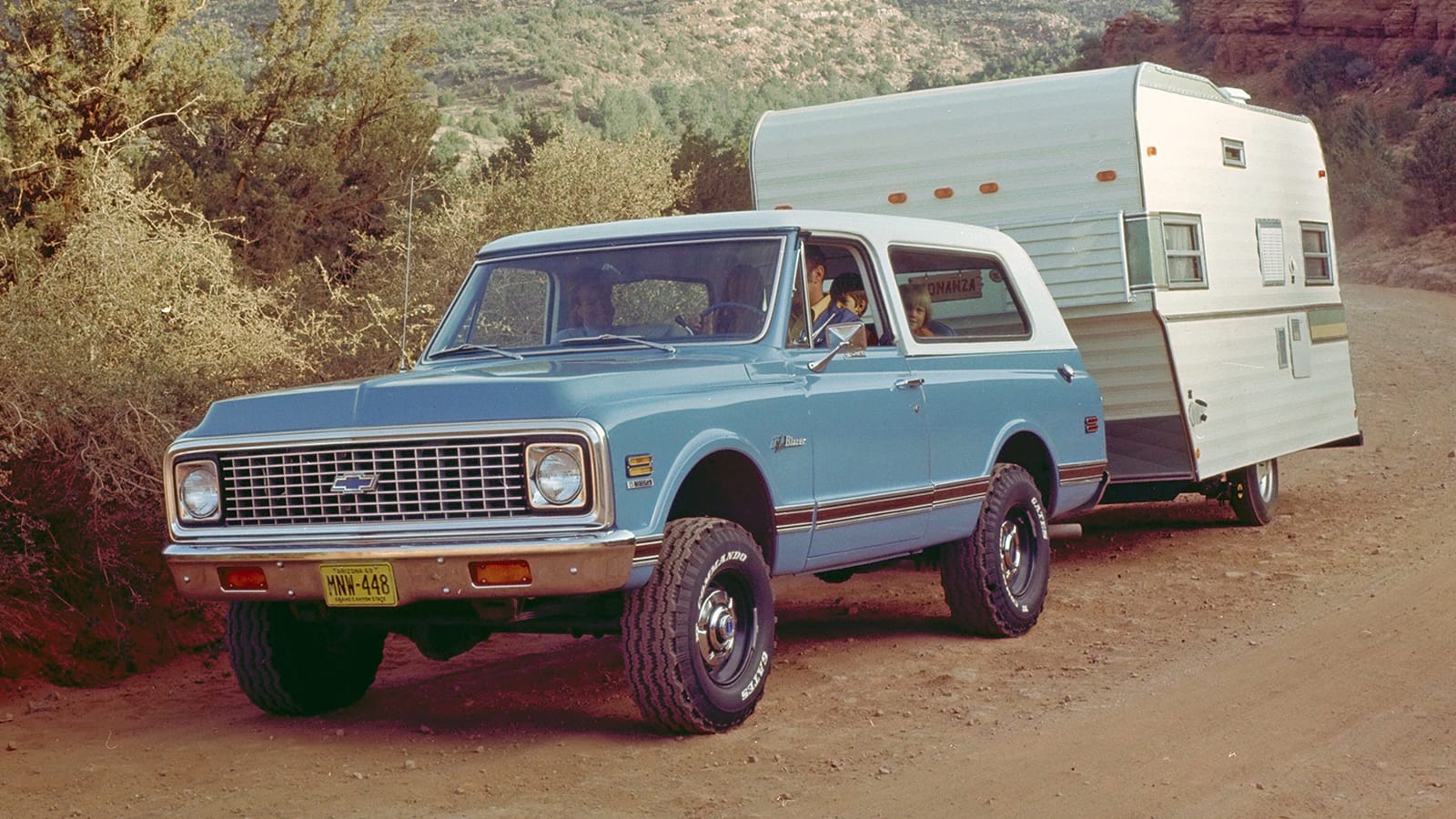 We start with the Blazers most people think of first, the full-size, truck-based models. It was introduced for the 1969 model year as a shortened, convertible version of the Chevy C/K full-size pickup trucks. In fact, it’s prefix of K5 follows the truck nomenclature (C10 was a two-wheel-drive pickup, K10 had four-wheel-drive, C20 and K20 were heavier-duty). And instead of a separate bed, it had a single-piece body, mounted on a shortened frame. The wheelbase was 104 inches, and the whole truck was about 177.5 inches long. It was 11 inches shorter in both measures compared to the shortest pickup. And besides the unique body, the truck was available with a removable fiberglass top.

That top wasn’t standard, and in fact, the Blazer hardly came with anything as standard. It only came with one seat, though you could option in a front passenger seat and rear bench. Fancier seats and more features were of course available, too.

Speaking of options, Chevy offered three different engines for the first generation of Blazers. Standard was a 250-cubic-inch inline-six, with options for a 307 V8 or a 350 V8. Manual transmissions with three or four speeds were available along with a three-speed automatic.

Four-wheel-drive with a two-speed transfer case was of course offered, along with a simple two-wheel-drive model. They each got different suspension, though. The four-wheel-drive version got solid axles front and rear with leaf springs. With two-wheel-drive, you got independent front suspension and a solid rear axle with coil springs all around. The first two years for the Blazer, only drum brakes were available, but front discs became available for 1971. 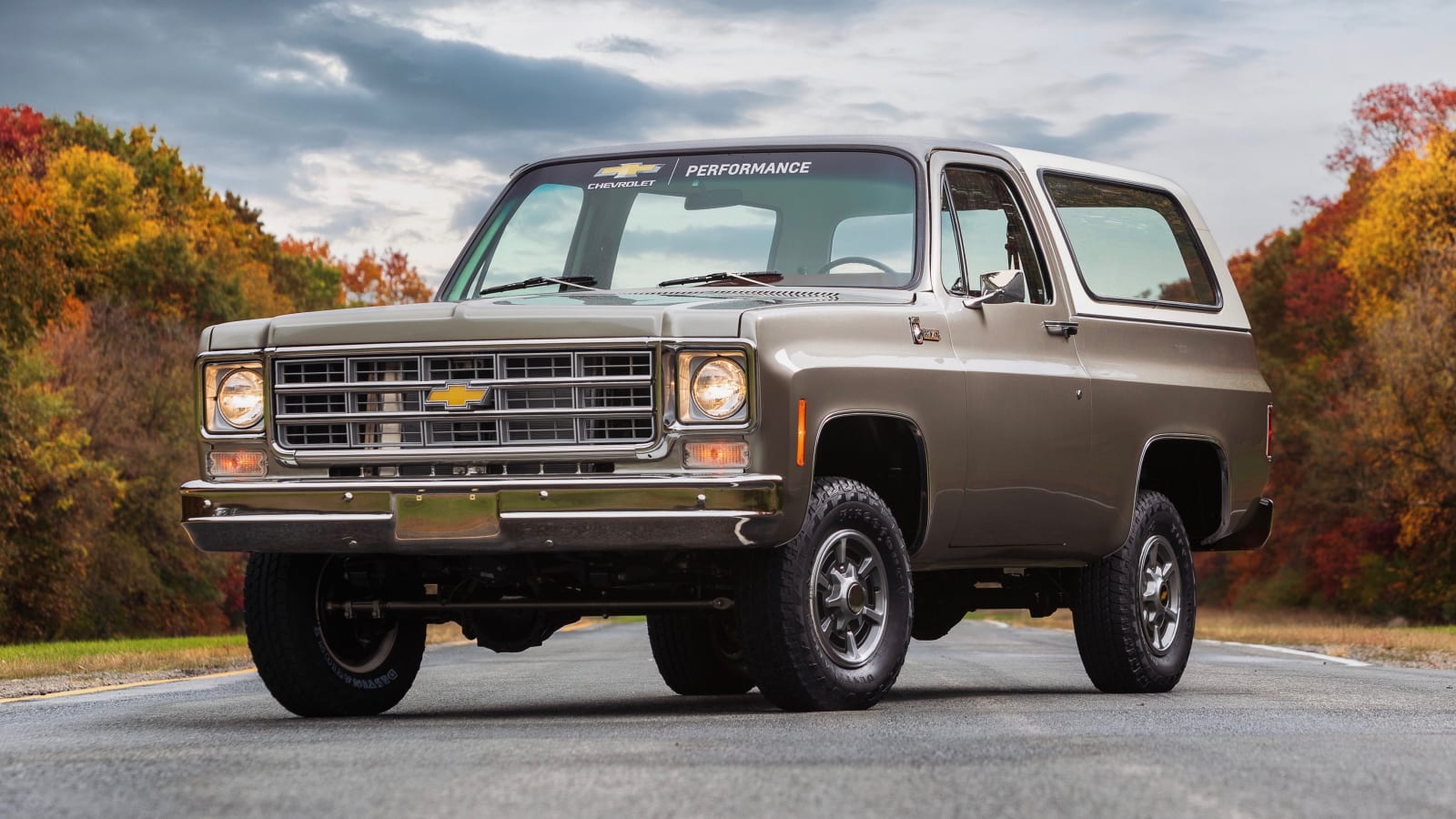 The longest-running generation of Blazer was easily the second, surviving for nearly 20 years. Like before, it was based on the full-size pickup, which was also redesigned at the same time. The basic bodystyle was the same with two doors and a removable roof, but with revised styling. It was also bigger. The wheelbase was 106.5 inches and total length was 184.4. Two- and four-wheel-drive versions were available, with the two-wheel-drive version getting updated suspension. Now it had leaf springs at the back, though coils stayed for the front. The four-wheel-drive version stuck with the solid axles and leaf springs all around.

Over the course of nearly 20 years, the second-generation Blazer stayed pretty much the same, but did receive some tweaks over time. New lights and grilles were introduced periodically, and the body changed to feature a solid half cab over the front passengers starting in 1976. It still had an available removable hardtop, but also had the option for a folding soft roof. The engine selection started with a 250-cubic-inch six, a 350 V8 or a 400 V8, with a 305 becoming available later. Eventually, a naturally aspirated 6.2-liter diesel V8 became available, which was used in military-spec Blazers, and in 1990, a fuel-injected 350 was offered, along with a four-speed automatic. Most of the rest of the time, the Blazer was available with three- and four-speed manual transmissions or a three-speed automatic. 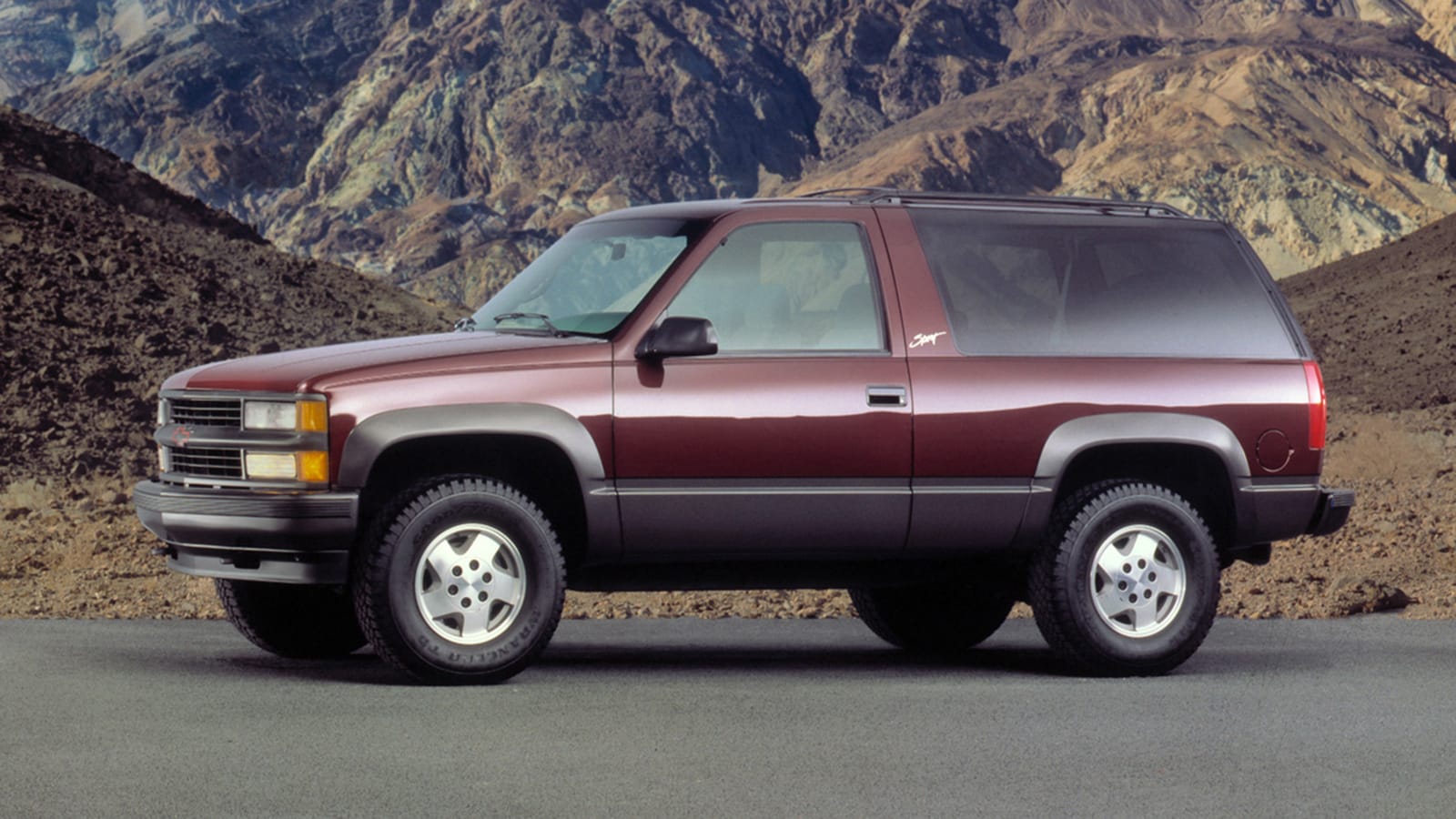 Though the second-generation Blazer lasted the longest, the third-generation represented the biggest change for the SUV. It was a slightly weird one, too, since the Blazer name was dropped in 1995 for the Tahoe name, along with a four-door option. This one was based on the GMT400 full-size truck and SUV platform. It adopted the smoother shape of the trucks down to the flush-fitting door handles, and it featured a much plusher, more finished interior than its past iterations (it actually had standard rear seats!). It also lost its removable roof altogether. The retracting rear glass was also gone in favor of a split tailgate and later barn doors. It also became the biggest full-size Blazer at 187.7 inches long overall, and a wheelbase of 111.5 inches.

Only one engine was available at first, a fuel-injected 350-cubic inch V8 with a 6.5-liter turbodiesel V8 coming later. Transmissions included a five-speed manual or a four-speed automatic. Initially, it was also only offered with four-wheel drive, though two-wheel drive came in 1995 when the Blazer name.

Like past Blazers, the third generation was still body-on-frame construction. But now all Blazers got independent front suspension. The four-wheel-drive ones had torsion springs up front, while two-wheel-drive ones got coils. They all had solid rear axles with leaf springs. The third generation was also the first to have standard anti-lock brakes.

The full-size Blazer, in Tahoe form, came to an end with the GMT400 series of trucks in 1999. The two-door body style was discontinued in favor of four-door Tahoes only. 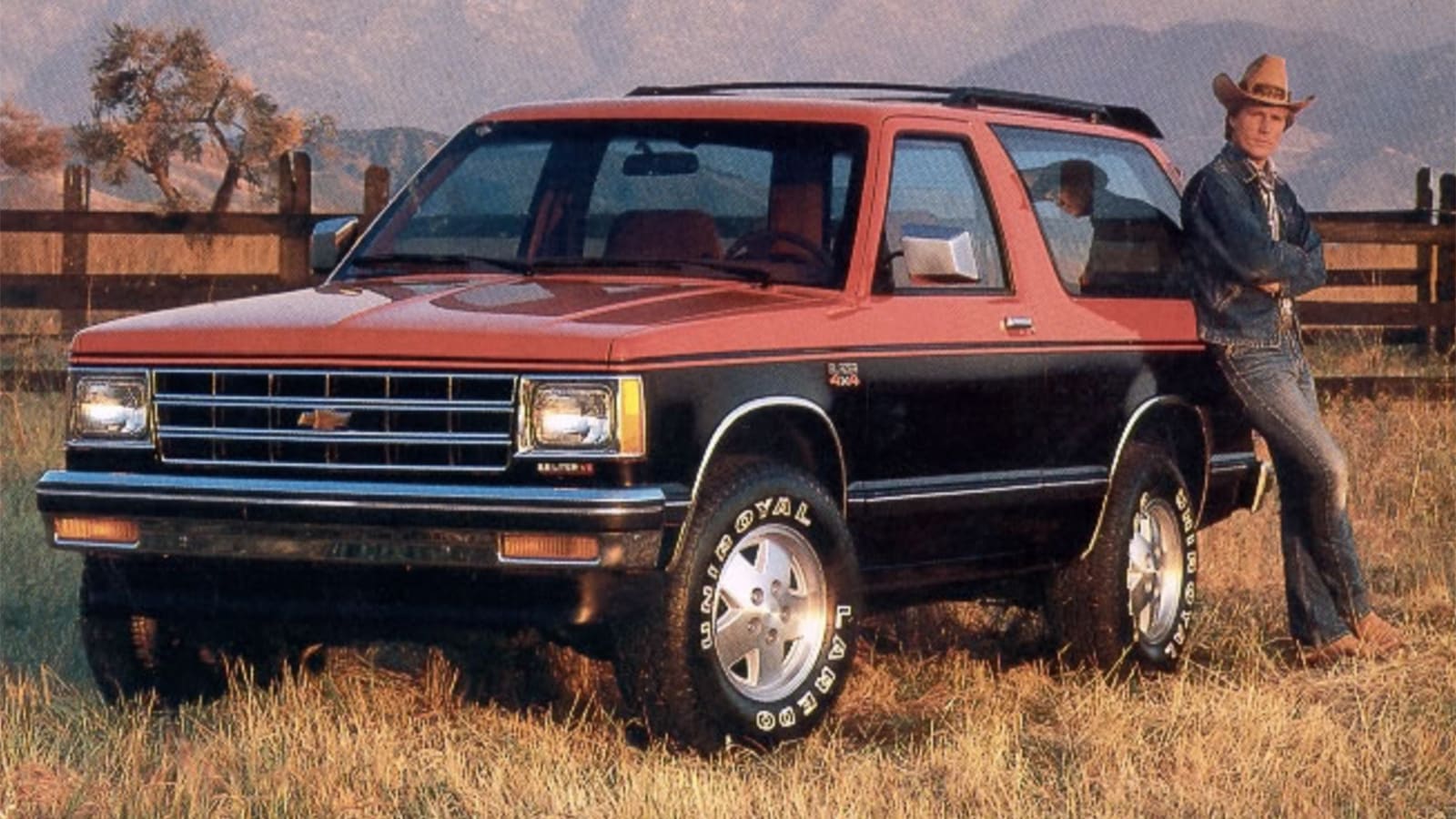 For the 1983 model year, the Blazer line expanded with the smaller S-10 Blazer. As its name suggested, it was based on the small S-10 pickup truck. Like its bigger Blazer cousin, the little Blazer featured a body-on-frame construction and the availability of four-wheel drive. It even came as a two-door body style only to start. But there were many differences.

Obviously the biggest difference was its size. With a 100.5-inch wheelbase and 170.3-inch wheelbase, the two-door was smaller than the original Blazer. Another big difference was the introduction of a four-door version in 1991. This one was still shorter than the full-size Blazer, at 176.8 inches, but its 107-inch wheelbase was about the same. And of course, both of these versions were only available with fixed steel roofs.

Under the little body was one of a variety of engines. To start, it was available with either a 2.0-liter four-cylinder or a 2.8-liter V6, and transmissions included a four-speed manual, a five-speed manual or a three-speed automatic. Later, the 2.0-liter four-cylinder was replaced by a fuel-injected 2.5-liter four, and the V6 also eventually picked up fuel injection. The four was eventually dropped leaving the 2.8-liter V6 as the standard engine, with a 4.3-liter fuel-injected engine as an option. The little V6 was also eventually dropped, leaving just the 4.3 with the option of either throttle-body fuel injection or port fuel injection for the final two years in 1993 and 1994.

What didn’t see much in the way of changes over its lifetime was the suspension, which consisted of an independent front with coil springs for two-wheel drive and torsion springs for four-wheel-drive. They all had leaf-sprung live rear axles. Brakes were front discs with rear drums, and ABS became available in 1992. 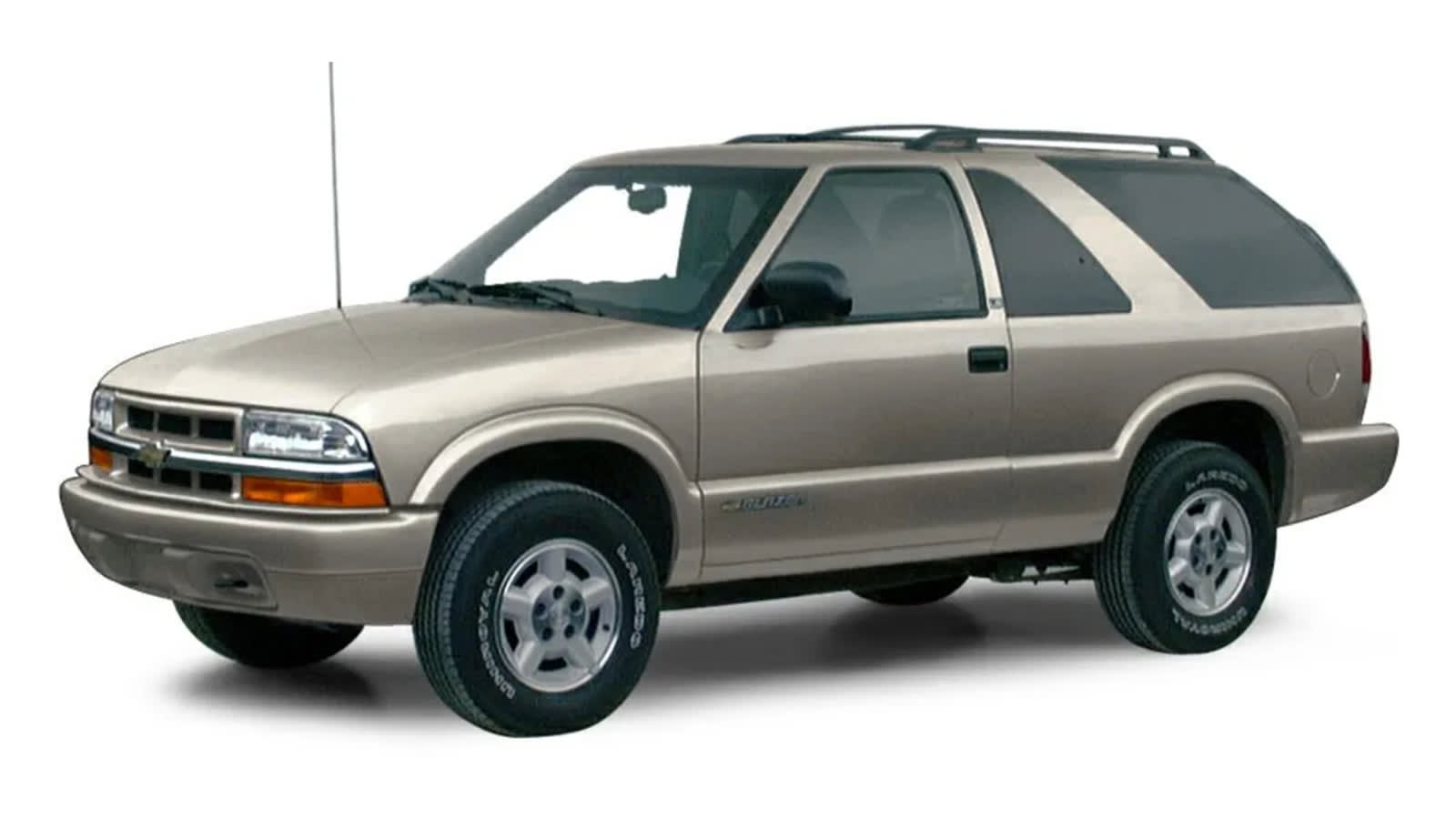 Like with past Blazers, the little one got a new generation at about the same time as the S-10 on which it was based. The design was much more round and seemingly aerodynamic-inspired, perfect for the 1990s. But looking past the sleek new metal, the new little Blazer was surprisingly similar to its predecessor. Two- and four-door models were available, and they even had the same wheelbases as the old versions. Not to mention the body-on-frame construction, similar suspension setup, the fuel-injected 4.3-liter V6 and choices of a five-speed manual or four-speed automatic.

But this generation of Blazer saw more evolution and more special models released. The year 1997 heralded many interesting updates. The four-door got the option of a conventional hatchback instead of a split tailgate, plus an available full-time all-wheel-drive system, which also added four-wheel disc brakes. For off-roaders, this year introduced the ZR2 trim level. It came with off-road specific shocks and springs, stronger axles, an automatic locking rear differential, 31-inch tires, a 3.9-inch wider track, and a 3-inch lift, with bigger fender flares to match. This was only available on the four-wheel-drive two-door model.

The other unique Blazer model introduced was the Xtreme. It launched in 2001. It was a pretty basic package consisting of unique wheels, lowered suspension and a body kit. But the results were a very sporty looking SUV. It was again only offered on the two-door Blazer. Later years also got the option of stripes or other vinyl graphics.

The final year for the Blazer was 2005. That year, only the two-door Blazer was offered to private customers, with the four-door only available to fleet buyers. The front-drive, unibody Chevy Equinox was introduced to fill the four-door Blazer’s slot in the lineup. And buyers looking for a more traditional SUV could opt for the slightly larger TrailBlazer, which had been introduced in 2002 and named after a former Blazer trim level. 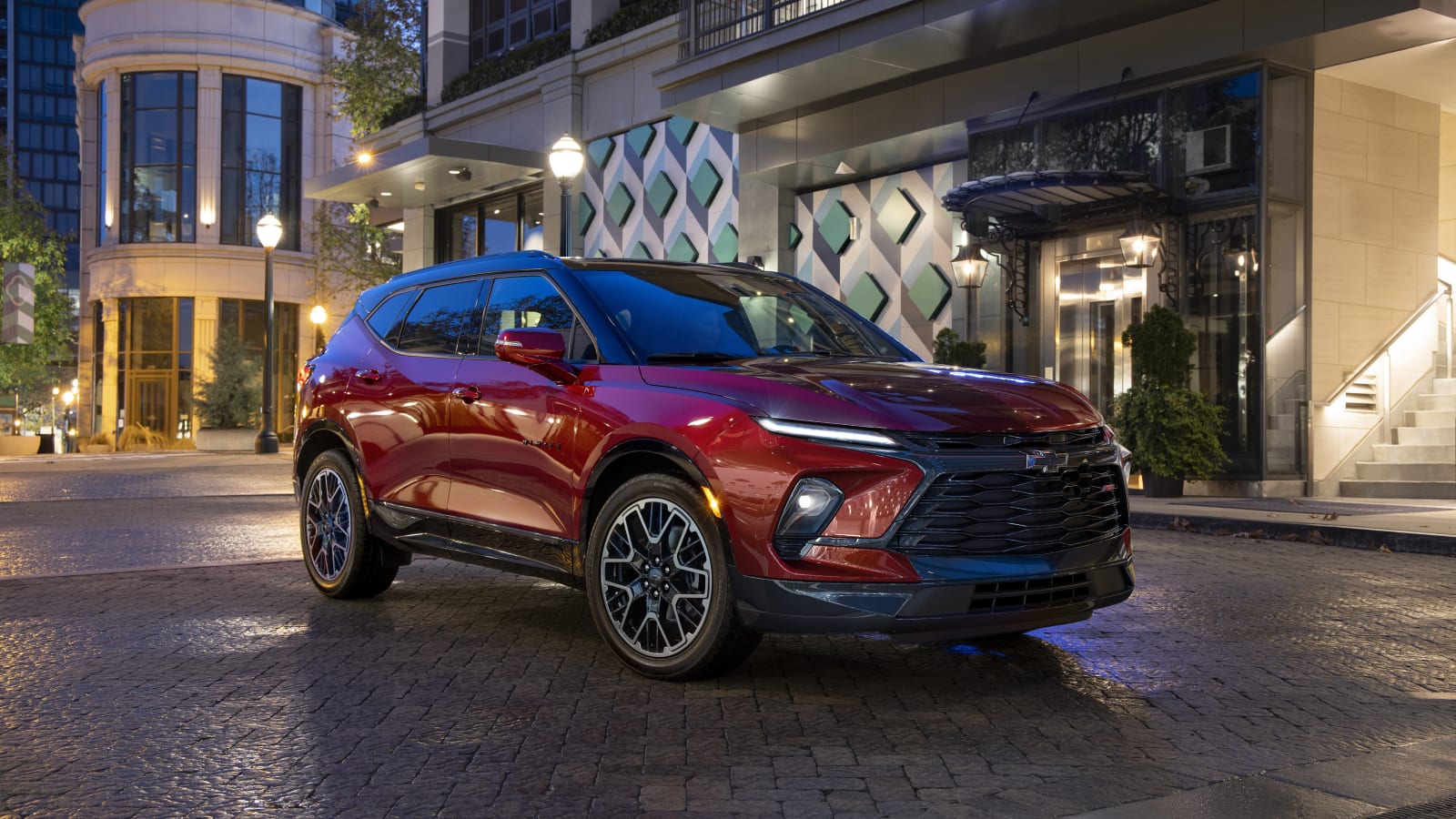 To the chagrin of classic Blazer fans, Chevrolet revived the name for a midsize, two-row, front-drive-based crossover SUV. The design shared virtually nothing with past Blazers either. Instead, it seemed to channel some styling from the contemporary Camaro. This was particularly evident inside, where it featured the same sort of climate vents as the sports coupe.

The modern Blazer is a unibody SUV. Suspension is independent all around with MacPherson struts up front and a multi-link setup at the rear. Front-wheel drive is standard on the Blazer along with a nine-speed automatic, but full-time all-wheel drive is an option. When it was introduced, it had the choice of a naturally aspirated 2.5-liter four-cylinder with 193 horsepower, or a naturally aspirated 3.6-liter V6 making 308 horsepower.

For 2023, the 2.5-liter engine has since been dropped, and the new base engine is a turbocharged 2.0-liter four-cylinder making 228 horsepower. The Blazer also picked up freshened styling.