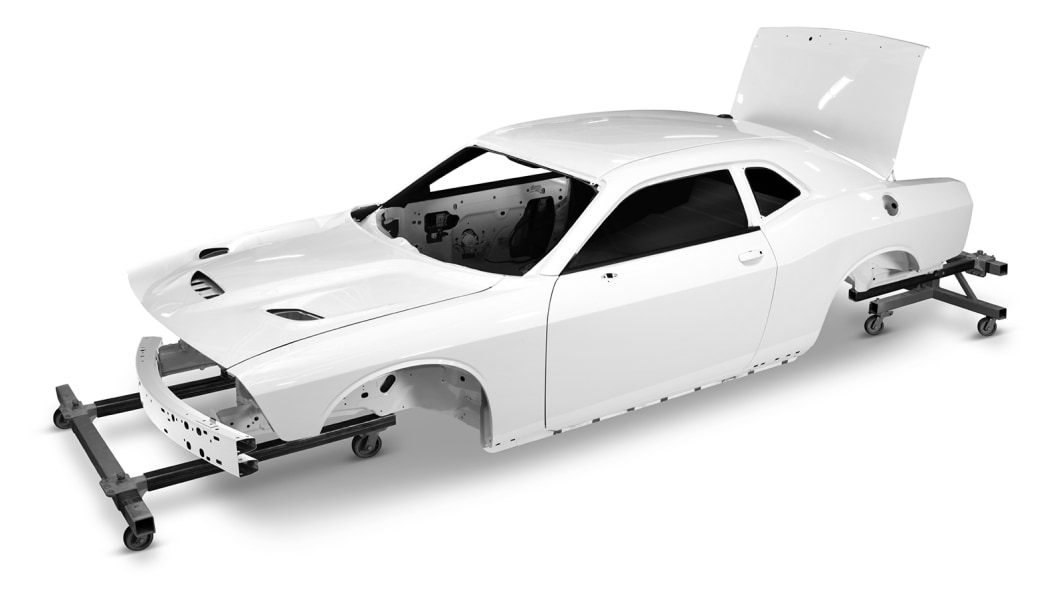 Dodge has announced it’s continuing to expand its aftermarket offerings with its Direct Connection factory parts offerings, as well as collaborations with SpeedKore and Finale Speed. Whether you’re a drag racer or a custom builder, there’s some exciting stuff coming out.

For racers, Direct Connection will be offering a couple new ways to help them build their race cars. The Challenger Drag Pak will now be available as a rolling chassis, in addition to a completed car. It’s basically the complete car, just short of the engine and transmission. That includes the car chassis, roll cage, suspension with four-link live axle rear setup, Strange 9-inch rear axle, Strange brakes, Weld wheels and Mickey Thompson drag tires. Pay your $89,999 for the chassis and add whatever engine and transmission you like. If you’re looking to build something more custom, Dodge will also sell Challenger bodies-in-white for $7,995. Note that they don’t come with VINs, so you won’t be able to register the bodies as street-legal cars after building.

On the topic of powertrains, Dodge will start offering Scat Pack 8HP70 eight-speed automatic transmissions for its crate engine kits. Later, 8HP90 transmissions from the Hellcat will be available. Superchargers in 2.7- and 3.0-liter sizes along with headers for the Charger, Challenger and Durango will also be sold.

Dodge is also partnering with a couple aftermarket companies to offer some special carbon fiber parts. SpeedKore, which has become well-known for its carbon fiber Mopar builds, will make exterior parts for the Challenger that Dodge will sell. And Finale Speed is licensing rights from Dodge to produce new carbon fiber 1970 Charger bodies. Later, the company will be creating Barracuda and Roadrunner bodies. All of them will also be offered through Direct Connection.