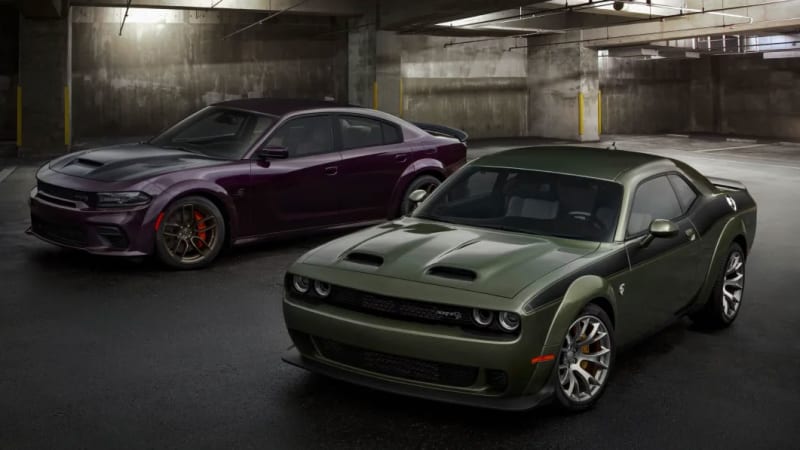 Every discussion about the next-generation Dodge Challenger and Dodge Charger twin comes with various ellipses, as no one outside the company — no one who’s talking, anyway — is sure of what the coming LF and LB models will bring. Motor Trend believes it can fill in some missing bits important to enthusiasts, citing sources for news that a Hemi V8 engine turning the rear axle will continue in the lineup. With Dodge having said that it plans for half its product range to be battery-electric by 2030, it was certain the gas-burning tradition would continue, but it wasn’t clear how many cylinders would be responsible for the burning.

The only question we have about the MT report is that it claims a Challenger and Charger will ride on a “new, large Stellantis rear-drive platform” that “will be separate and unrelated to EV skateboard chassis” and can fit a V8. We know the coming electric muscle twins will ride on the STLA Large platform. Stellantis showed a car with a Charger-like silhouette on the STLA Large architecture during the automaker’s EV day, and the Brampton, Ontario, Canada plant that builds the current cars was upgraded to produce STLA vehicles. However, Mopar Insiders said Stellantis is adapting the STLA Large to accept mild hybrid and PHEV powertrains, a seemingly contrary position to Motor Trend’s mention of an all-new V8-swallowing chassis. And given Stellantis CEO Carlos Tavares’ rather successful obsession with trimming costs, a brand new V8 sedan platform, even one spread between Dodge, Chrysler, and Maserati, seems a big ask.

As for Dodge’s words on the matter, when Carscoops asked the automaker last year about mechanicals, the outlet was told, “The Dodge Challenger and Dodge Charger vehicle platforms as you know them today, along with the Hellcat powertrain, will continue production through 2023. In 2024, Dodge will transition to new platforms, new electrified muscle cars.” There’s the word “platforms,” plural, but also the word “electrified,” which usually means an ICE with electric assistance but has lately been applied to full EVs. When Carscoops asked about an ICE trim, the rep replied, “The brand has only said BEV.” So we’ll have to see if there really are two platforms, or if there are two versions of the one platform. Whatever’s underneath, the story goes that the new-gen rides will be lighter and dynamically improved.

Lifting the hood, MT believes the cars will get the new twin-turbo 3.0-liter Hurricane inline-six in Standard Output tune of more than 400 horsepower and a High Output tune of something beyond 500 horsepower, topped by a Hellcat V8 cranked to “800 hp minimum.” They would shift through the new-generation ZF eight-speed automatic and send power to the rear wheels or all four wheels. Seeing that the Dodge rep and company CEO Tim Kuniskis have stated the Hellcat V8 is dead come late 2023, there’s either another V8 coming to fill in the blanks or the V8 option won’t last long.

Assuming Dodge is able to run its planned reveal program during Speed Week next month, where the battery-electric muscle car is expected to debut, it’s possible we’ll get more answers then.