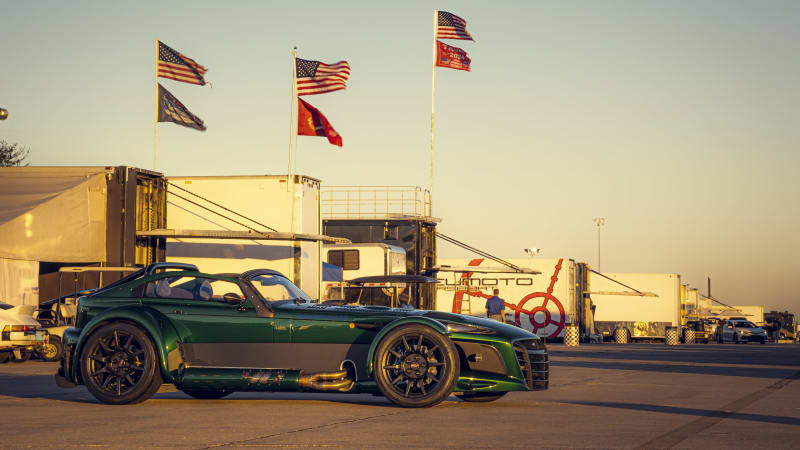 If you’re one of the Americans who’s been waiting patiently for niche car builder Donkervoort to come state-side, today is your lucky day. For decades, the Dutch firm has gotten attention from abroad with its extremely quick, bare-bones cars, but thus far they have not been officially available in the U.S. Until Now.

Donkervoort has announced that its D8 GTO Individual Series will be the first model to be offered in America. It’s powered by the turbocharged 2.5-liter Audi five-cylinder found in the RS3. According to Donkervoort, it makes over 400 horsepower, which can push the sub-1,500-pound car to 62 mph from a standstill in just 2.7 seconds. To reach 124 mph (200 kph), it takes as much time as a normal car gets to 60, just 7.7 seconds.

If you’re unfamiliar with the brand, here’s a brief history lesson. The company was established in 1978 by a man with the exceedingly fantastic name of Joop Donkervoort. Like many great performance cars, the first Donkervoorts were inspired by the Lotus Seven. Early Donks were powered by Ford engines, but Donkervoort began sourcing them from Audi in the 1990s.

The cars have evolved too, with current models resembling what a Lotus Seven might look like if it had continued over the decades. However, Donkervoort insists that its motto of “No Compromise” has been maintained throughout. That means the cars have minimal electronic assistance and weight. It wasn’t even until 2007 that they added a closed roof version.

“Inquiries from the U.S. rank second behind only Europe, despite our supercars never being sold there, so we know enthusiasts in the United States are aware of what Donkervoort delivers,” says managing director Denis Donkervoort.

To get the cars distributed in the U.S., Donkervoort has partnered with Bespoke Motor Group. Apparently, it was a long-held dream to get the brand over here, but the company says it wanted to find the right partner that could offer the same level of service and customization.

There are already three orders on the books. The first three cars are being sent to Florida, Colorado and California. Donkervoort says there’s a two-year waiting list in Europe, but production allocations have been carved out for the U.S. launch, so American buyers won’t have to wait that long.