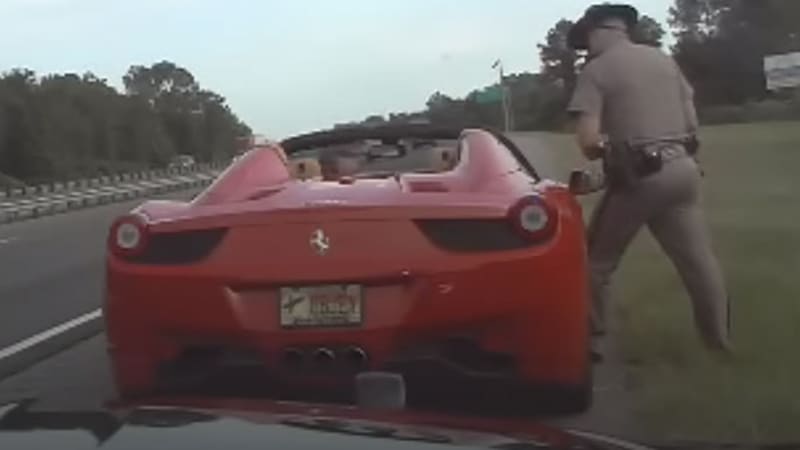 When faced with the question of a person performing some baffling behavior, the answer is often, “Because the behavior works often enough to warrant trying again.” So when trying to figure out why a Florida county commissioner said all kinds of power-trippy things after being stopped for speeding, we may just have the answer.

Joe Mullins represents Flagler County’s District 4, the largest district in the county just north of Daytona Beach’s Volusia County. As Flagler Live reports and dashcam video shows, Mullins got pulled over for driving his Ferrari 458 Spider at 92 miles per hour in a 70-mph zone in Flagler County on June 19. The officer tried to be nice, telling Mullins he’d try to get him going again quickly and that he normally issues a warning. But when the officer realized Mullins had been warned just a month before, Mullins wasn’t pleased about the prospect of getting a ticket. In addition to trying to use his business card to escape the ticket, he told the Florida Highway Patrol trooper, “I run the county.” To be clear on context, Mullins made his money outside politics, as head of The Mullins Companies.

Back to the stop: The ploy didn’t work, but Mullins is what’s commonly referred to as a repeat offender both before and after receiving tickets. Stopped in Seminole County on June 2 for doing 31 over the limit in a Mercedes SUV, he sent it all the way down range on the two troopers. Mullins again proffered his card instead of his license and registration. In addition to stressing his political position, Flagler Live quoted the trooper’s words that his behavior was so “extremely condescending, belligerent, illogical and disrespectful” that that officer threatened to arrest Mullins if he didn’t leave after receiving his ticket. To that, Mullins told the trooper that arresting him would be “a career-ending move.”

The county commissioner’s formula is combativity on the front end, contrition on the back end. Palm Coast Observer reports that Mullins wrote to the relevant judges after the two most recent tickets to ask that points not be assessed on his license. The Flagler stop he blamed on having “lost track of time and while taking calls and dealing with traffic knowing I was behind schedule, I was not paying attention to my speed nor the limit.” Both letters included the passage, “I am asking for lenience as I am gladly to pay in full the amount owed but would like the assessed points and my record not to be noted if possible.”

It’s not known if that request was granted in the Seminole incident in June. For the July ticket, Mullins took traffic school to avoid points. And despite the appearance of asking for several favors — the same M.O. as when he got ticketed in 2016, before his election to the commission — Mullins told the Palm Coast Observer of the Flagler incident, “I received a speeding ticket, paid my fine and completed traffic school. I never asked for any favors. I regret how I spoke to the officer. I fully support and love law enforcement and look forward to winning my upcoming election and servicing Flagler County for four more years.”