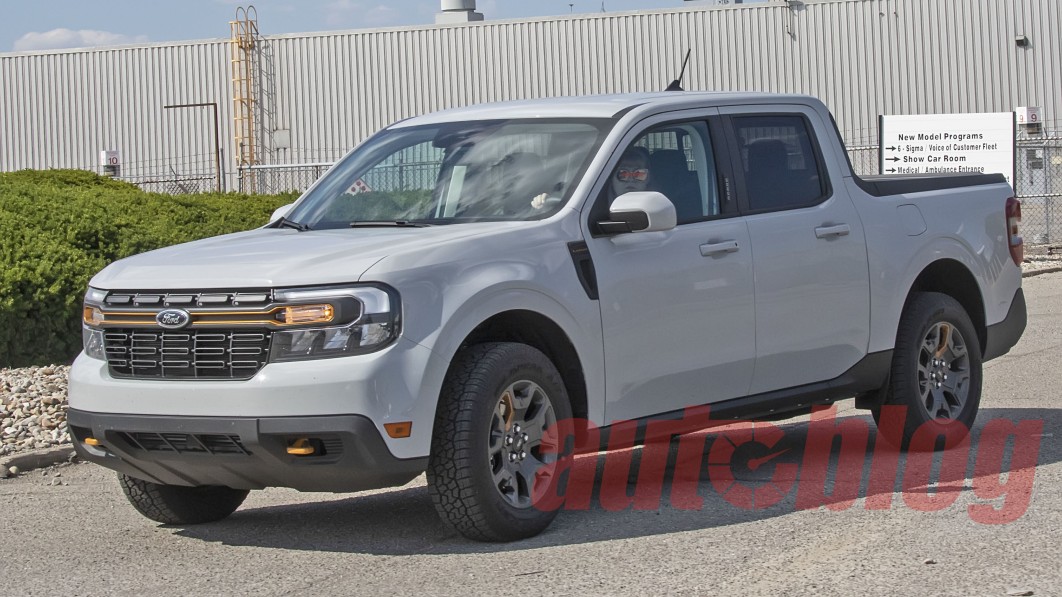 Production of the Ford Maverick pickup may be in desperate need of a silicon-based laxative, but that hasn’t stopped the Blue Oval from plugging away at new variants meant to extend the still-new truck’s appeal. We’ve seen a handful of Mavericks testing in public since the baby truck was put into production, but this one resembles a coherent package that conforms to Ford’s existing truck hierarchy.

The orange highlights on the grille, wheels and fender badging on this Maverick Lariat give a strong whiff of Tremor, the off-road trim offered on the F-150, F-250 and Ranger. While each truck gets an aesthetic all its own, orange elements have been the common thread tying all of them together — and to the Timberline variants of the company’s various SUVs. Basically, if it’s meant to be a bit off-roady and it’s not a Bronco, a Raptor or both, it’s probably one of these jack-o-lantern-inspired models.

Here, we see the highlights on the grille, tow hooks, Lariat badges and wheels. The “TREMOR” decals that grace the rear fenders of production trucks are missing, but that’s to be expected for an unannounced model still flying under the radar. The front bumper has also been redesigned for an improved approach angle, further hinting at an off-road theme. Unfortunately, the most interesting element remains hidden beneath this prototype’s rear end.

While we can see the independent rear suspension components peeking out from underneath its bed, there are no up-close shots of the rear differential that might reveal exactly what Ford has in mind for a baby Tremor. In addition to their off-pavement suspensions, F-Series and Ranger Tremors come equipped with locking rear differentials; the Escape-based Maverick can’t accommodate something that robust, but the twin-clutch, torque-vectoring all-wheel drive system offered in the Bronco Sport would pretty much drop right in.

Hopefully, we won’t have too long to wait to find out exactly what Ford has in store for its baby pickup.