When car enthusiasts think of Honda, there’s a very good chance that a Civic or Accord will come to mind (OK, so maybe an S2000 or CRX, too). It makes sense, they’ve not only been made for decades, but they’ve boasted nearly uninterrupted excellence and strong brand loyalty. For the past 25 years, though, another Honda has slowly but surely crept up the sales charts and in the process become Honda’s most important model. That’s right, the Honda CR-V.

Along with the Toyota RAV4, the CR-V helped invent the compact crossover segment as we know it. Introduced at the end of 1995 in Japan, and launched in the U.S. for the 1997 model year, the original CR-V spawned four subsequent generations, with a sixth being revealed today as the 2023 Honda CR-V. Along the way, it has evolved from a simple, utilitarian “Comfortable Runabout Vehicle” to a far more powerful, refined and even luxurious model. Throughout each generation, however, the CR-V has demonstrated Honda’s knack for smart interior packaging, family friendly space and distinctive features. Oh, and the very thing that sparked so much Civic and Accord loyalty in the first place: dependability.

CR-V, this is your life. 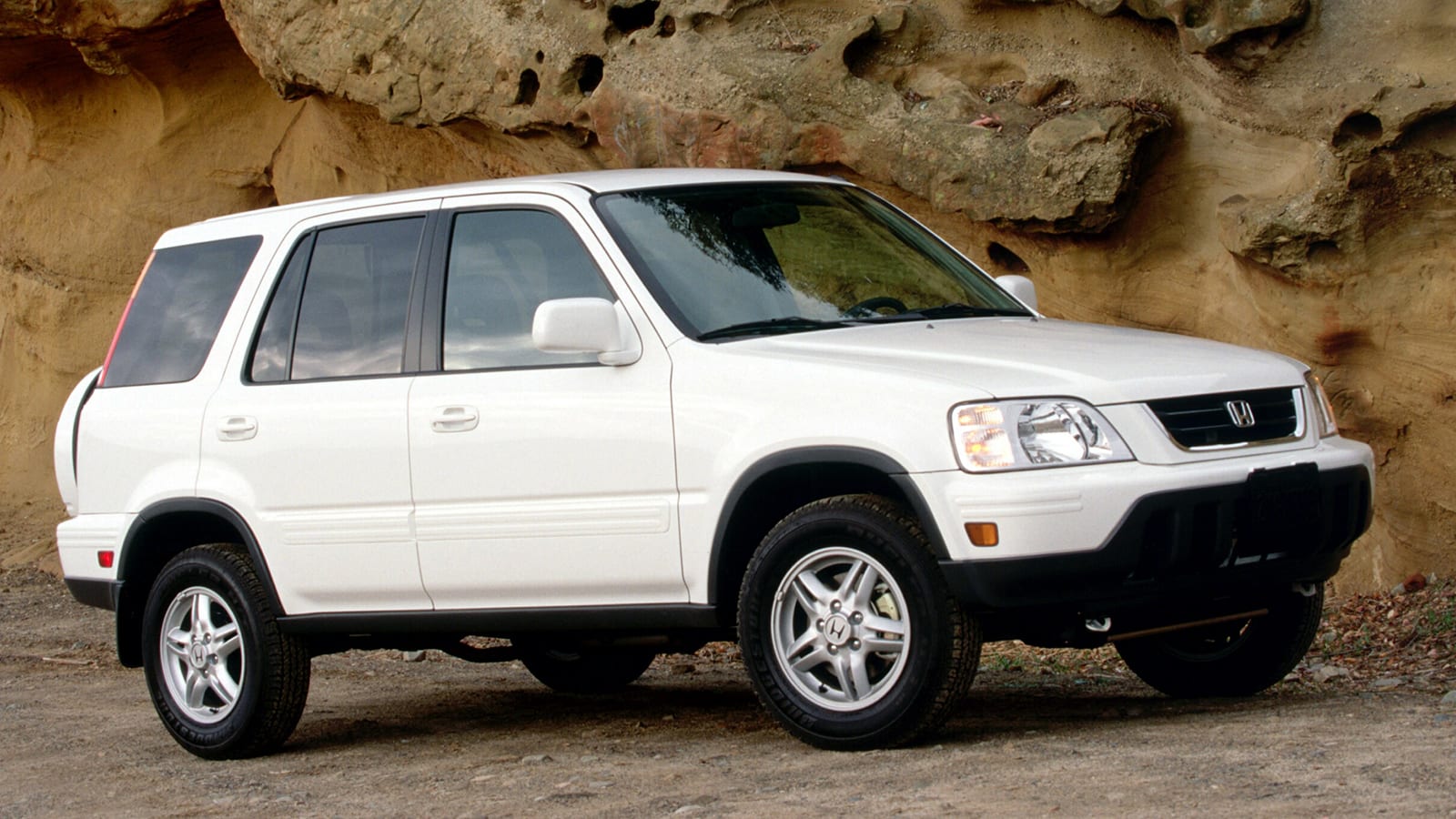 The original CR-V laid out the pattern for every model to follow. It was based on the Civic platform with a transverse four-cylinder engine and front- or all-wheel-drive. But it was taller, larger and featured a bigger, more powerful engine than the car it was based on. According to Honda, the design and purpose of the car was partly inspired by “trekking” or hiking shoes. It was supposed to be tough and athletic, but not intimidating, and presentable for many occasions. Those goals are also reflected in the name: CR-V stands for “Comfortable Runabout Vehicle.”

The design of the car reflects the durable, all-season aim of the car. It featured black rubberized bumpers and matching door trim, staples of the small crossover segment even today. Eventually versions with more body-color trim were offered. It had a commendable amount of ground clearance at 8.1 inches, which greatly surpasses a 2022 CR-V. Approach, breakover and departure angles were 31, 23 and 29 degrees respectively. A full-size spare was fitted to the two-piece, side-hinged tailgate (lift up the glass first, swing out the gate). Honda made sure to make space in the bumper to lower that spare for rear visibility, though. Despite the rugged cladding, the overall design was still clean, simple and thoughtful. The corners were rounded to help keep the car small and easily to maneuver; the taillights were mounted up high to keep them from being covered by dirt, mud or snow; and the glass area was kept large for visibility.

Some other nifty features were included inside, too. The CR-V had a completely flat passenger floor, so no one had to worry about a transmission or exhaust tunnel when sitting in the middle rear (remember, most SUVs at this time were truck-based and came standard with rear-wheel drive). Honda also kept the area open between the front seats for easier access to the back, like in a minivan. A pop-out tray could fill the space to hold cups and other items. The cargo floor could also slide out and turn into a picnic table, which would be great for camping or tailgating (Senior Editor James Riswick reports that his mother used her CR-V’s picnic table at high school PTA events). For the same possible purposes, a water-tight, drainable compartment resided under the picnic table. In Japan, the CR-V even had available GPS navigation. It was mounted in the dash and had its controls on a panel that could pop out to be a remote.

Since it was based on the Civic platform, the CR-V was similar to it and other period Hondas. It featured independent double-wishbone suspension at all four corners. It had a B-series four-cylinder, and it was primarily front-wheel drive. But the engine was enlarged to 2.0 liters for CR-V duty in the U.S., and it made 126 horsepower and 133 pound-feet of torque. It was initially offered with a four-speed automatic transmission, followed by a five-speed manual. Front-wheel drive and all-wheel drive were both available through the generation. 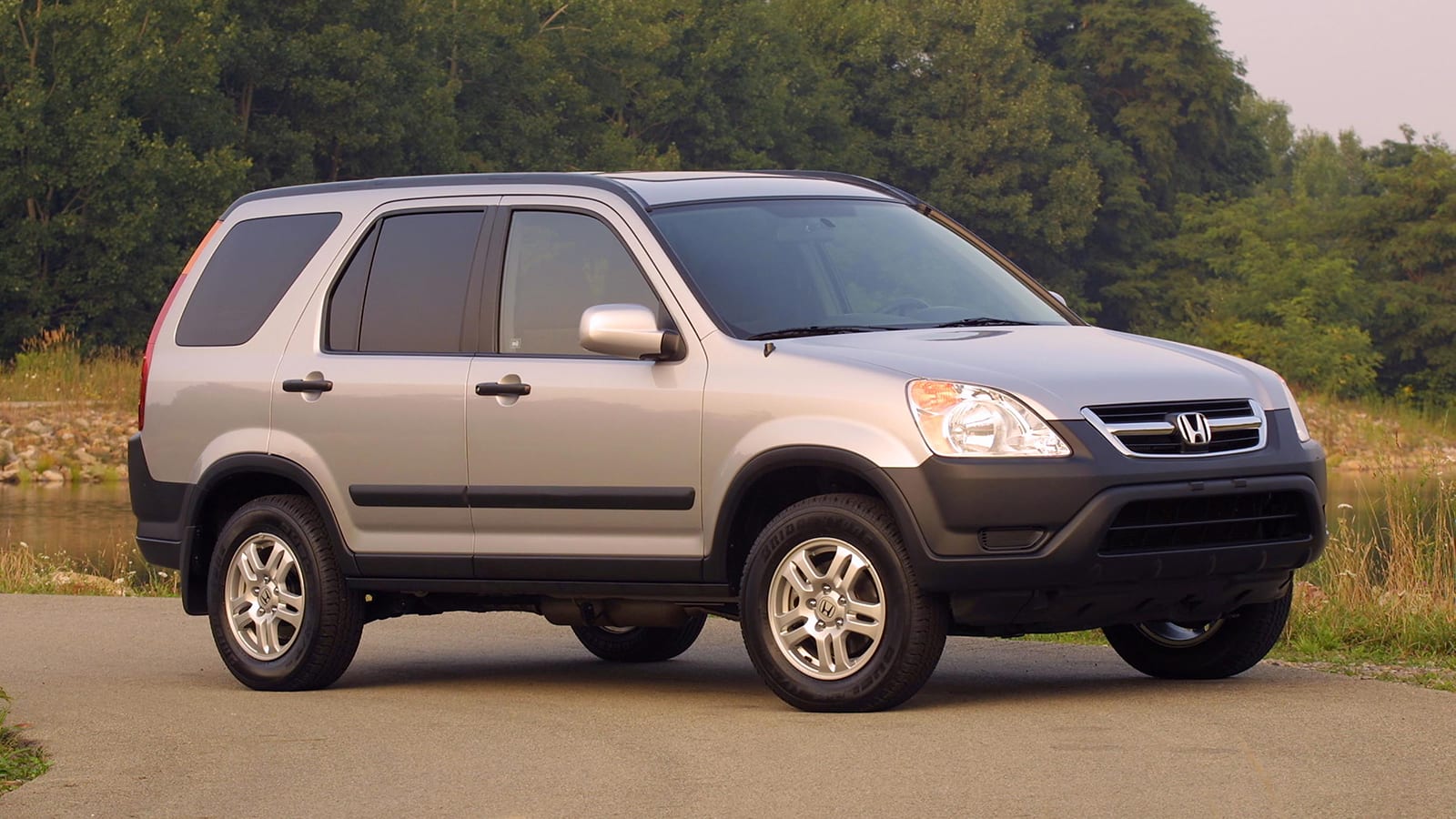 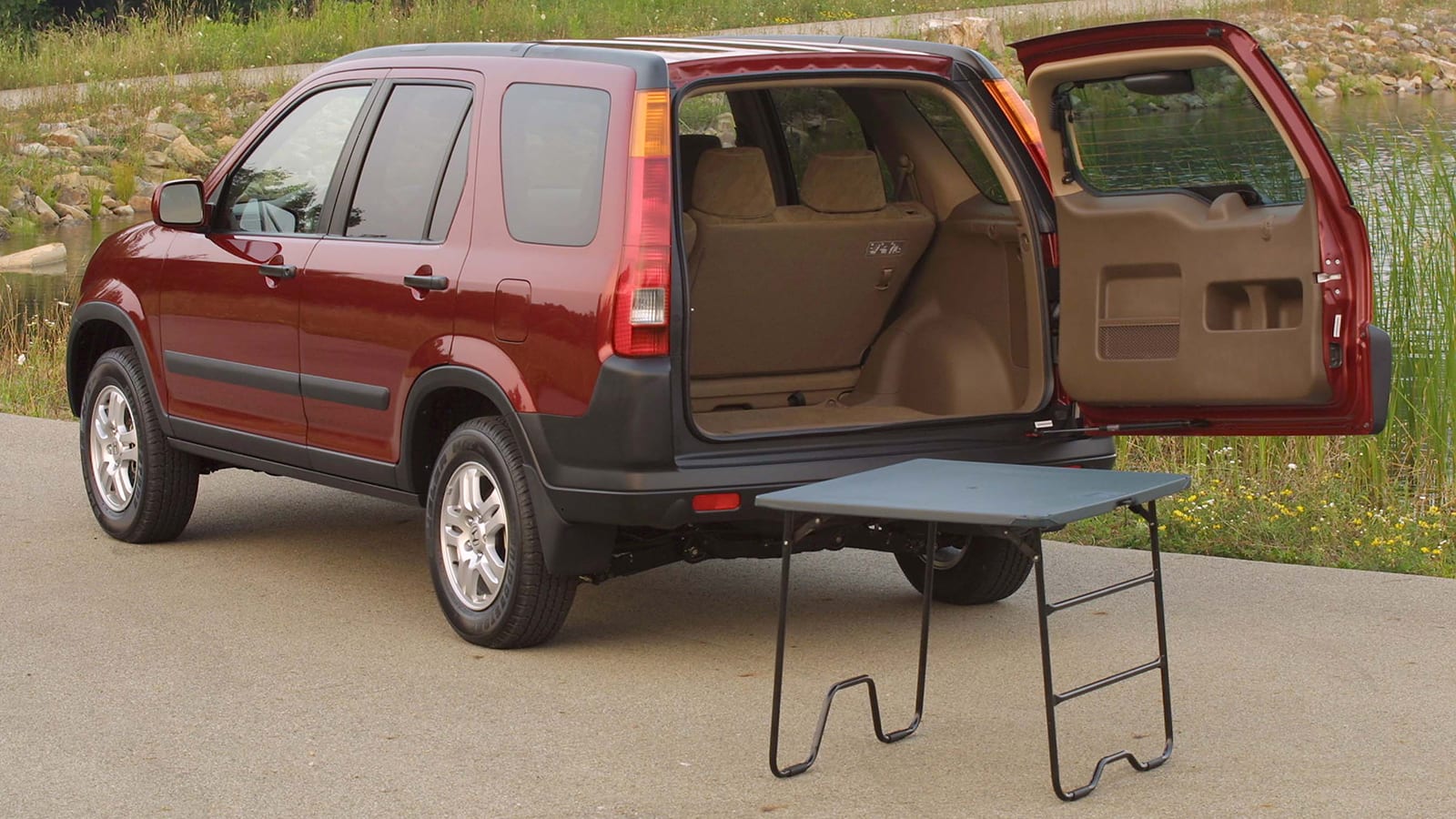 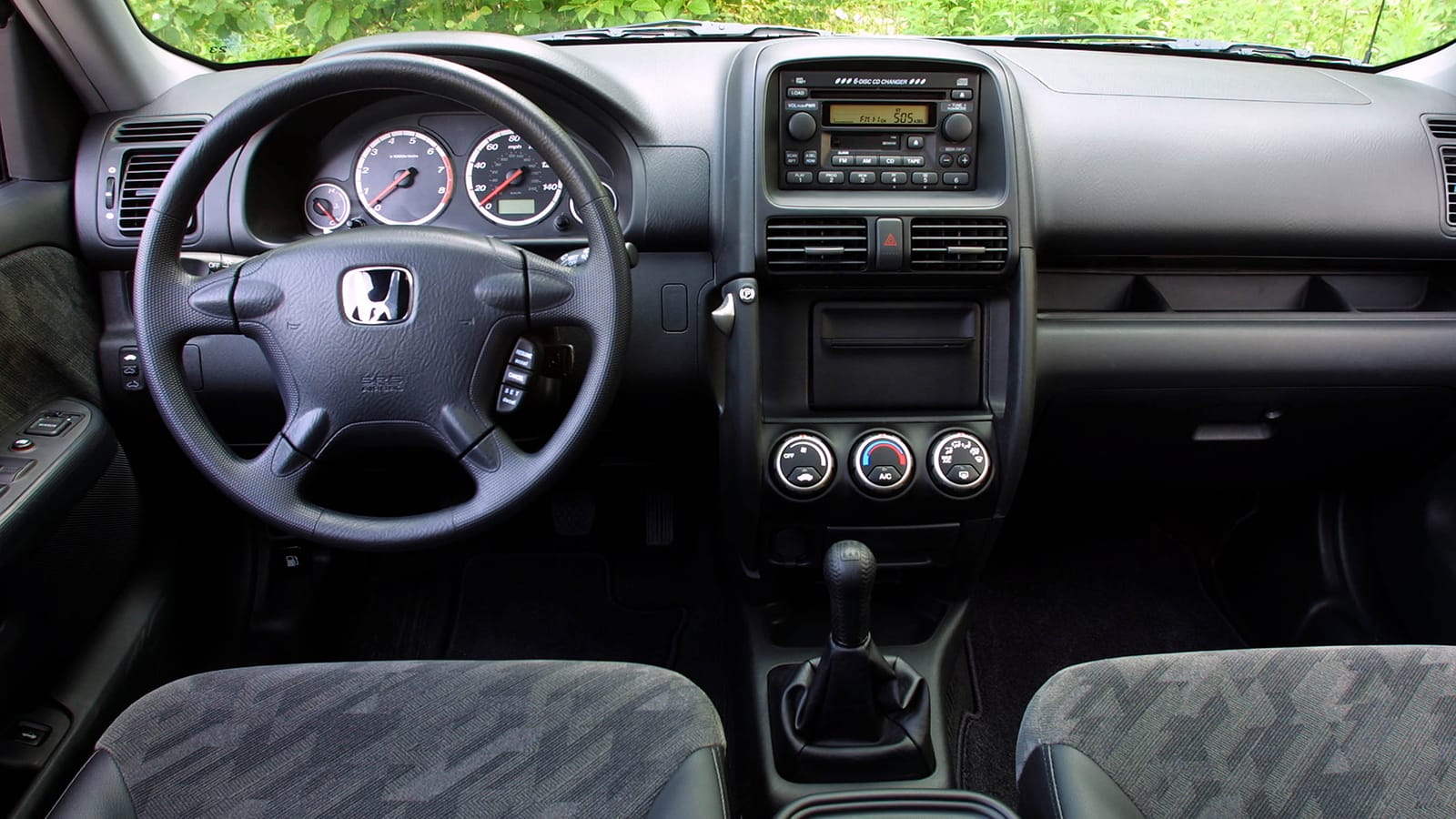 The next Honda CR-V clearly evolved from the original, with the main goal of just making better in most ways. It was certainly a bolder design with even bigger rear taillights and a shape not far removed from a Star Trek shuttlecraft. Even the interior received some unique touches, such as the unique hand brake integrated into the dash that looked like a jet fighter control stick. Ground clearance remained the same 8.1 inches, but its approach, breakover and departure angles were worse than before.

The new model was bigger, though. It was an inch longer overall, and 1.3 inches wider. It had more interior space including more cargo space. Behind the rear seats it increased from 29.6 cubic feet to 33.5 (this would be a good figure even in today’s compact SUV segment). With the seats down, it went from 67.2 cubic feet to 72. Those rear seats were given additional functionality with a sliding adjustment. Honda even suggested you could recline the front seats down to meet the rear seats for a lounge-like interior, just as it would later advertise with the Honda Fit. The second-generation CR-V also retained the flat, open floor plan and slide-out picnic table. The tailgate still swung out, but was now a one-piece design.

This version of the CR-V saw some significant mechanical changes. It was based again on the same platform that was shared with the contemporary Civic, but it had moved to MacPherson struts up front instead of double-wishbone suspension. The engine was even bigger at 2.4-liters in the U.S., and it was now a VTEC-equipped K-series engine. Power was up considerably to 160 horsepower and 162 pound-feet of torque. Once again, front- and all-wheel drive were available, as were a four-speed automatic and a five-speed manual. 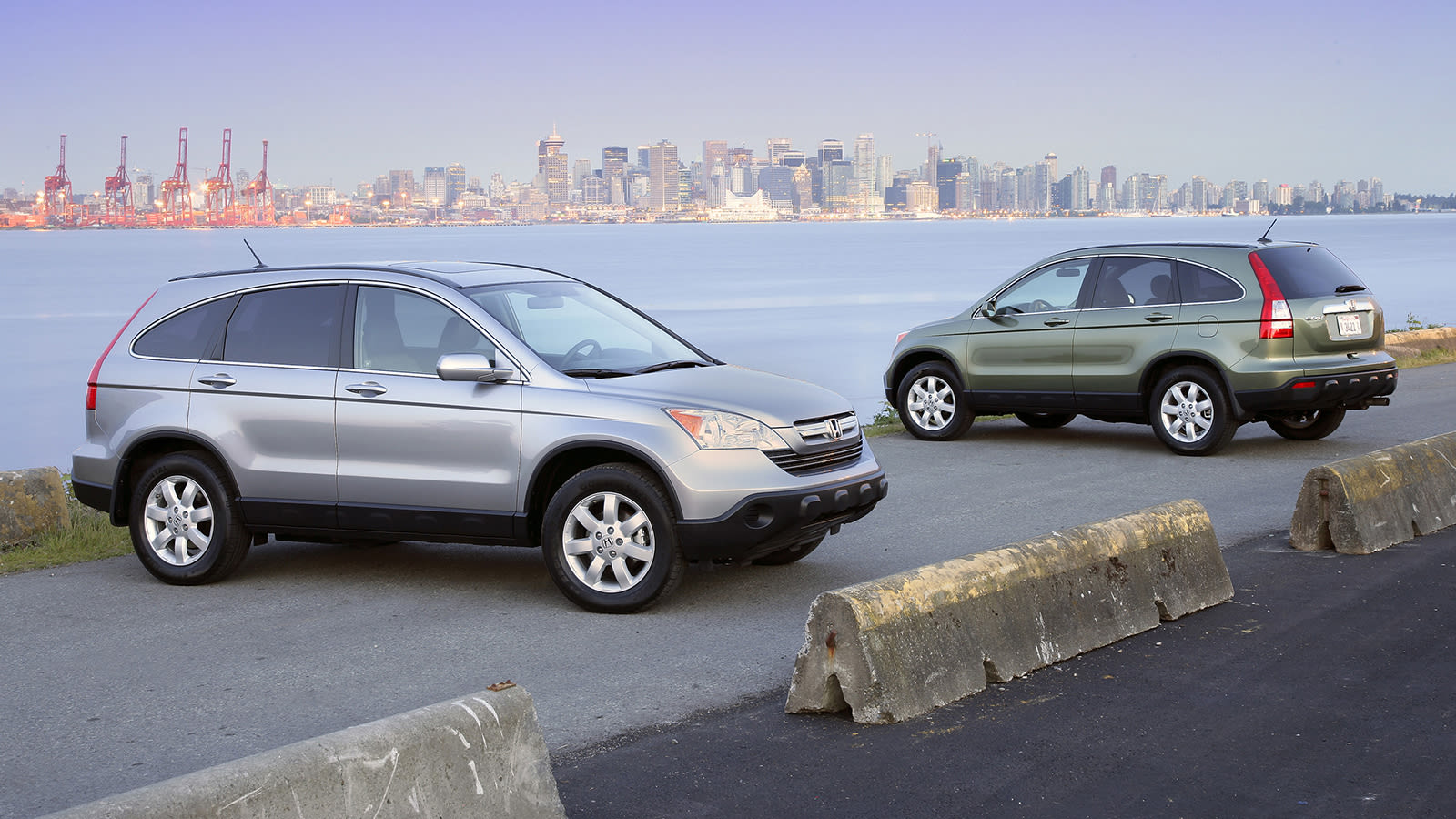 The third CR-V is the least evolutionary of the group. Visually, it looks the least like the models that came immediately before and after. Philosophically, it represented a more revolutionary change for Honda’s compact SUV, as it was less utilitarian, more car-like and designed primarily for on-road family use. Honda said this was a reflection of buyer interest. The goal was to retain the practicality, but to make the CR-V ride and drive more like a car. The styling reflected that. Unpainted bumpers were gone and cladding was significantly reduced. The swingout tailgate was replaced by a traditional liftgate. The rear-mounted spare was moved under the car, too, killing the water-tight compartment and picnic table in the process. Inside, the CR-V received fancier plastic pieces with faux-metal finish. It could even be had with a center console if you weren’t a fan of the minivan-style opening between the seats.

There were benefits to many of these changes. Moving the spare tire under the CR-V, as well as lowering the ground clearance to 7.3 inches lowered the center of gravity. It also helped shorten the CR-V by 3.1 inches. And despite the fact it was actually shorter, it was more spacious inside. Cargo capacity ranged from 35.7 to 72.9 cubic feet. Honda also offered a multi-level cargo shelf for organizing items (a one-and-done feature for this generation) and kept the sliding back seat. .

Mechanically, it was the same basic layout as the previous CR-V. It again used a 2.4-liter VTEC four-cylinder making 166 horsepower and 161 pound-feet of torque. Sadly, the manual transmission was dropped, but the automatic was given another ratio for five speeds total. And of course, front- and all-wheel drive were available. 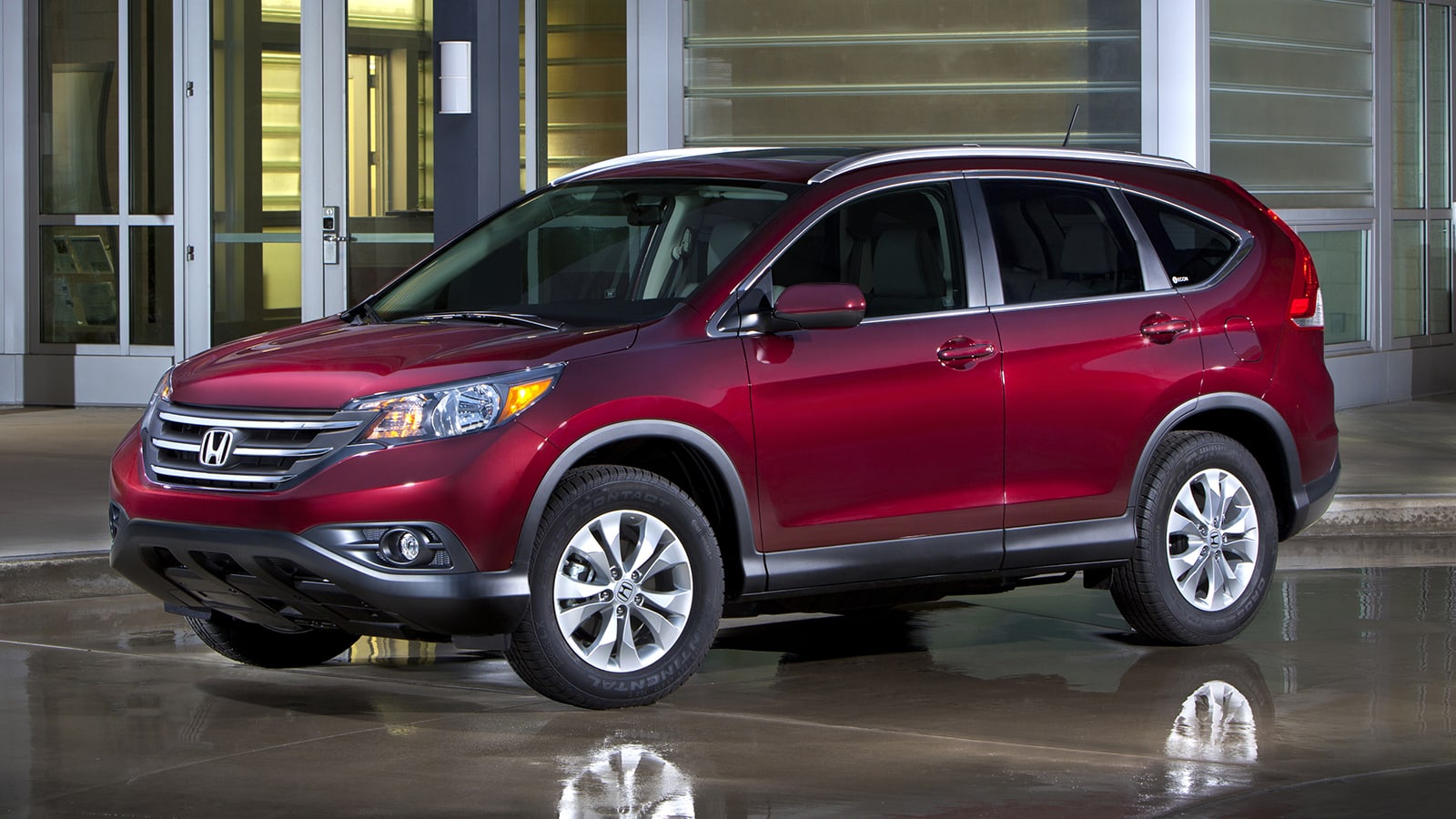 This version of the CR-V may be the least interesting. It grew by 1.5 inches in length, but lost even more ground clearance (6.4 to 6.8 inches. It gained a bit of cargo space with the seats up, but lost about the same amount with the seats down. It lost its sliding back seat, but gained remote-folding back seatbacks. The styling kept the more on-road vibe of its predecessor, but was safer and less interesting. The interior also suffered as Honda in this era was cost-cutting in ways it didn’t before or since.

Mechanically, it was mostly carry-over to start. It had a 2.4-liter four-cylinder, though it now made 185 horsepower and 165 pound-feet of torque. It was again paired with a five-speed automatic. But later in this generation, the engine was updated bringing torque up to 181 pound-feet of torque. With that engine change, Honda swapped the five-speed auto for the CR-V’s first CVT. That transmission would introduce something entirely unexpected for a Honda CR-V: unreliability. It would cause headaches for owners and Honda alike. 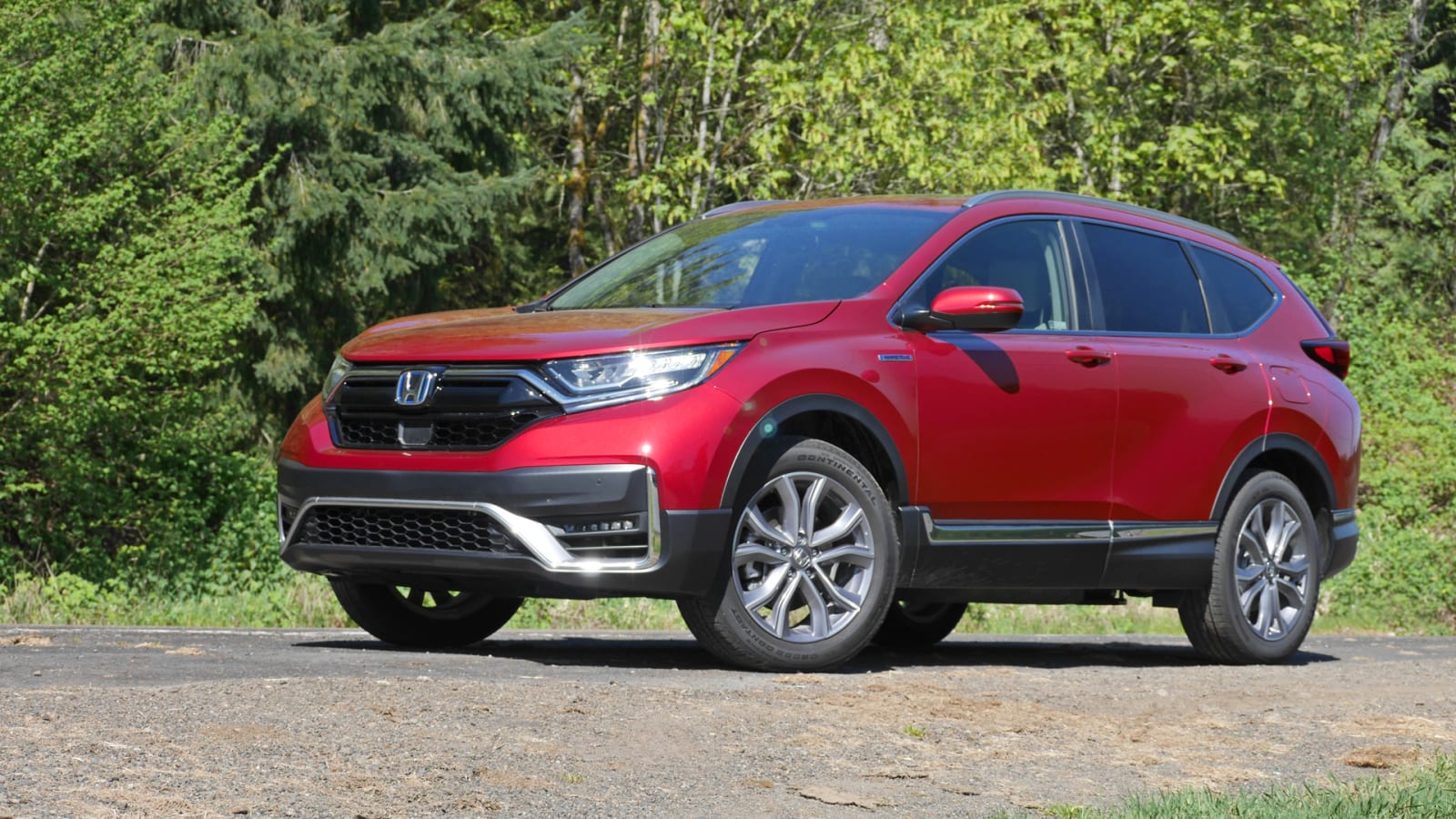 Visually, this generation was largely an evolution of its predecessor, albeit with curvier bodywork and a low, jutting front fascia. This CR-V was nevertheless a thorough improvement with numerous interesting changes. It became larger in size by a little over an inch in most directions, which also gave it more cargo space than any of its precursors. It had more ground clearance, too, measuring in at between 7.8 to 8.2 inches. The interior, meanwhile, boasted improved materials, a more visually appealing design and closed the gap between the front seats. There was more technology, too, though it wasn’t particularly well executed and customers frequently complained.

But the big changes for the CR-V were under the hood. The general layout remained the same, but this time a turbocharged engine was available for the first time in the CR-V’s history in the United States (turbodiesel models were available in Europe in previous generations). It was a 1.5-liter four-cylinder, sans VTEC, making 190 horsepower and 179 pound-feet of torque. It was an optional engine and had plenty of problems its first two years, but in general, was the CR-V engine to get as it was both more powerful and more efficient. The standard engine was the same 2.4-liter naturally aspirated engine as before. Both were coupled to CVTs (the previous generation’s transmission issues were ironed out) and front- and all-wheel-drive were offered.

That wasn’t the only big powertrain, change, though. For 2020, Honda introduced the CR-V Hybrid. It featured a naturally aspirated 2.0-liter four-cylinder, and combined with the electric motors, total output was 212 horsepower and 232 pound-feet of torque. All-wheel drive was the only option. And in addition to being the most powerful CR-V, the Hybrid was the most efficient, delivering 40 mpg in the city, 35 on the highway and 38 in combined driving. It was the version we most recommended.