Toyota is having something of a sports car renaissance right now. The Supra is back, and soon with a manual transmission again. The affordable, fling-able GR 86 is in its second and best generation yet. It’s even marking 10 years on the market. Toyota has even created two rally-inspired all-wheel-drive hot hatches, the GR Yaris for most of the world, and the bigger, more powerful GR Corolla for the U.S. There is a famous Toyota sports car that has yet to see a revival, though: the Toyota MR2.

Yes, rumors have flown about for years now that Toyota’s mid-engine, rear-drive Porsche-for-the-people would return, but none of them have come to fruition. That leaves the last MR2 we got the MR2 Spyder. It was a departure in many ways compared to its predecessors. It wasn’t even called MR2 in its home market, where it was actually called MR-S (for Midship Runabout Sports, instead of Midship Runabout 2-Seater). Some other markets got the MR-S name, too. An apocraphal tale says Toyota dropped the MR2 name in France because it sounded like a word for “crap.” It was the only model that was only offered as a soft-top convertible, and the only one to have a single, naturally aspirated engine. Still, the MR2 Spyder was a fun, light sports car of the truest sense that should remain on enthusiasts’ radars for years to come. 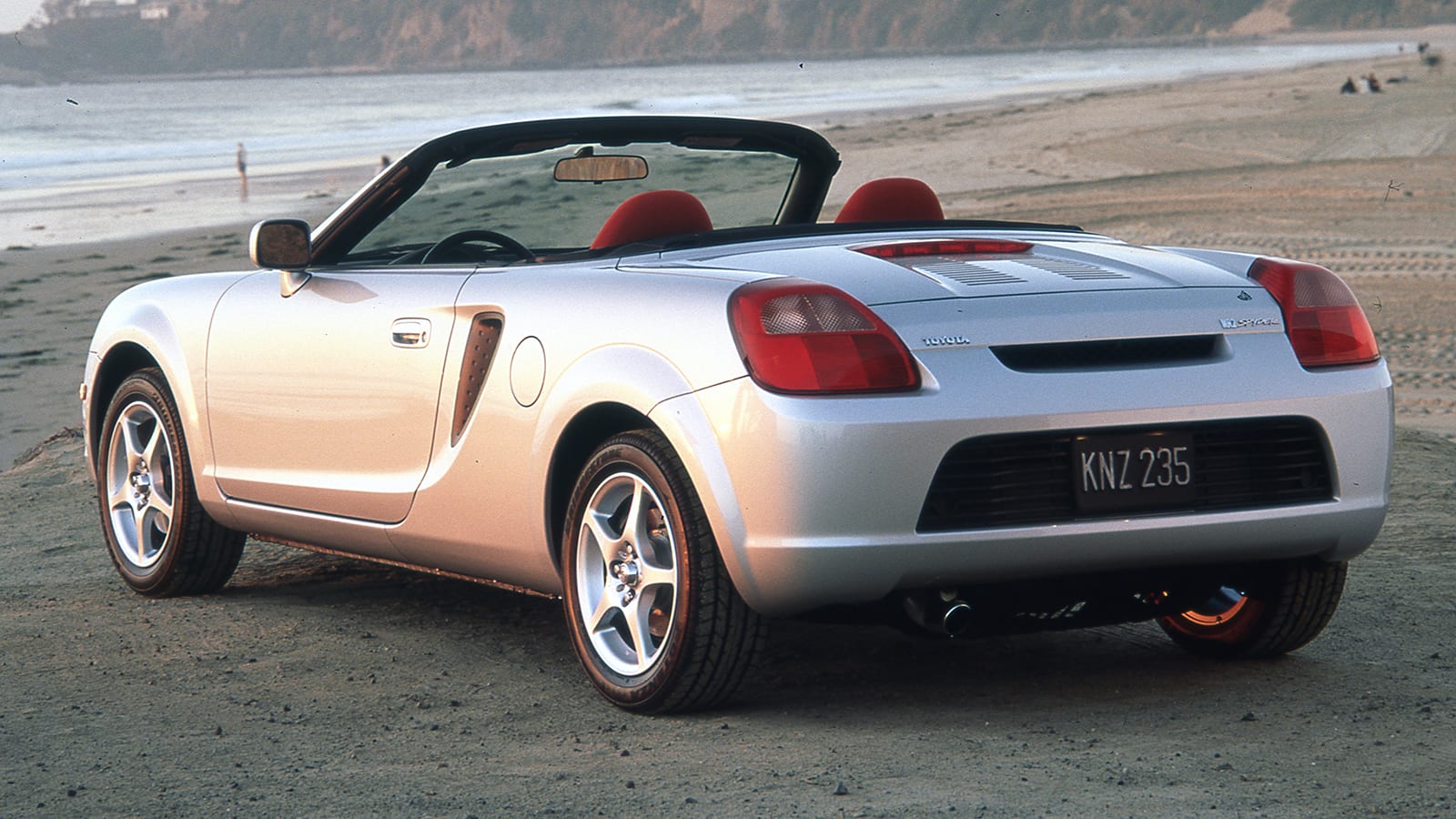 Why is the Toyota MR2 Spyder a future classic?

There’s a lot about the MR2 Spyder that makes it unique, fun and collectible. Affordable mid-engine cars have always been unusual. In part, it’s not a very practical design that would work well for other cars, so they’re almost always expensive to develop, and thus end up being more expensive cars to begin with. As such, something affordable like the MR2 Spyder is something special.

That same layout, though, is superb for sports cars. It can help keep weight distribution even. Under acceleration, there’s more weight toward the back, providing better traction. The nose is light and feels extra responsive, and it can be low for excellent visibility. All this applies to the MR2 Spyder, and it’s enhanced by the car’s light weight (just under 2,200 pounds with a regular manual, and just over with the sequential transmission), and its convertible roof. This fun, open driving experience is the biggest appeal of the MR2 Spyder. 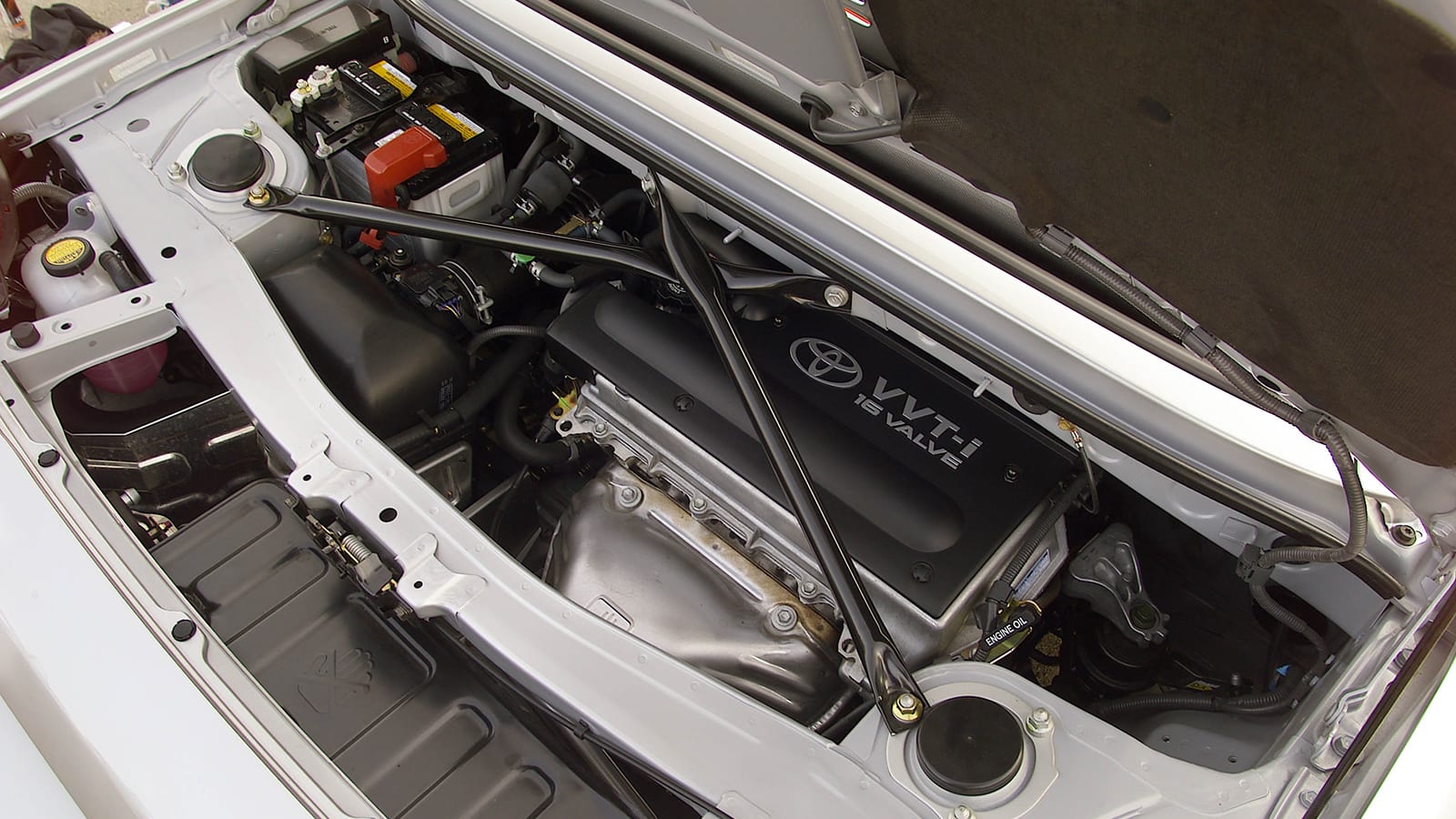 That convertible roof made it unique among MR2s, too. The first- and second-generation cars were offered from the factory as coupes with optional removable roof panels; either T-tops or full targa tops. But with the exception of a handful of special second-generation convertibles, the Spyder is the only model that was ever offered with a folding soft top, the only roof option.

Beyond that, it’s also a distinctive-looking car, in part because of that engine layout, but also because of the styling. It has huge, happy headlights, and a low, aggressive grille. And the rear intakes and vents make the exotic powertrain layout obvious. 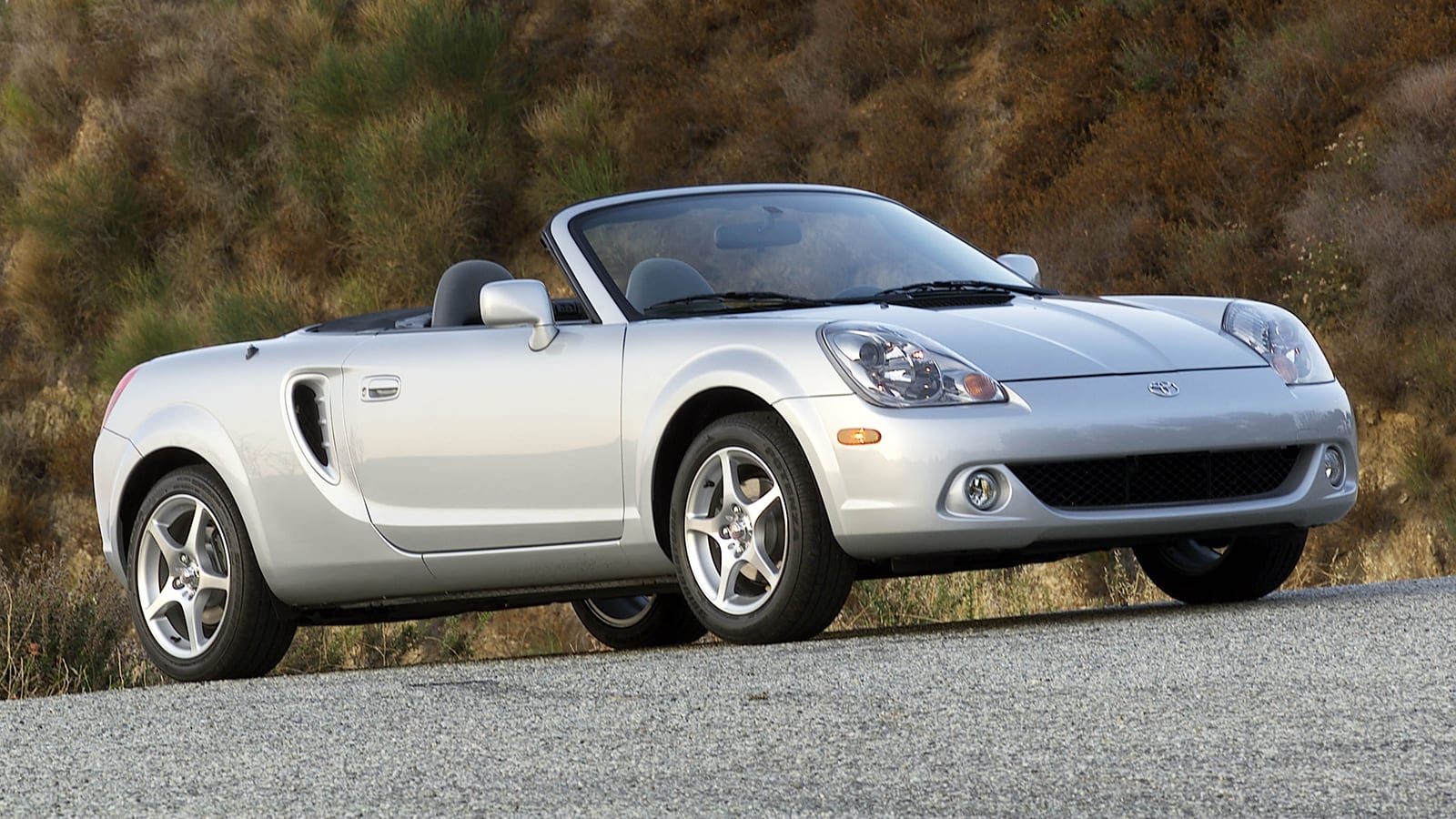 What is the ideal example of the MR2 Spyder?

Just about any MR2 Spyder will be a solid choice, since it didn’t change much over its lifetime. For the first two years, it was only available with a five-speed manual transmission, and then in 2002, Toyota introduced an unusual five-speed sequential manual. The following year, the sequential manual was upgraded to a six-speed. This transmission really was a single-clutch automated manual, not a torque-converter automatic or dual-clutch transmission. Also interestingly, it did not feature a full automatic mode, so the driver would still need to operate the shifter to request different gears. According to Toyota’s press materials, this was to keep the price of the transmission reasonable for the car.

Alongside the six-speed sequential manual came a visual refresh that applied to the next few years of MR2 Spyder. And in 2004, the MR2 got an optional helical limited-slip differential. No matter the year, every MR2 was paired with the same naturally aspirated 1.8-liter four-cylinder that made 138 horsepower and 125 pound-feet of torque. That engine also appeared in many other Toyotas of the time such as the Corolla, Matrix and base Celica.

Under the skin (which featured completely bolt-on front and rear fenders), the MR2 Spyder used MacPherson struts not just at the front, but at the rear. Four-wheel disc brakes were standard, as was ABS. The tire setup was staggered with 185-mm tires up front, and 205-mm tires at the rear, much like bigger, more powerful mid-engine cars. 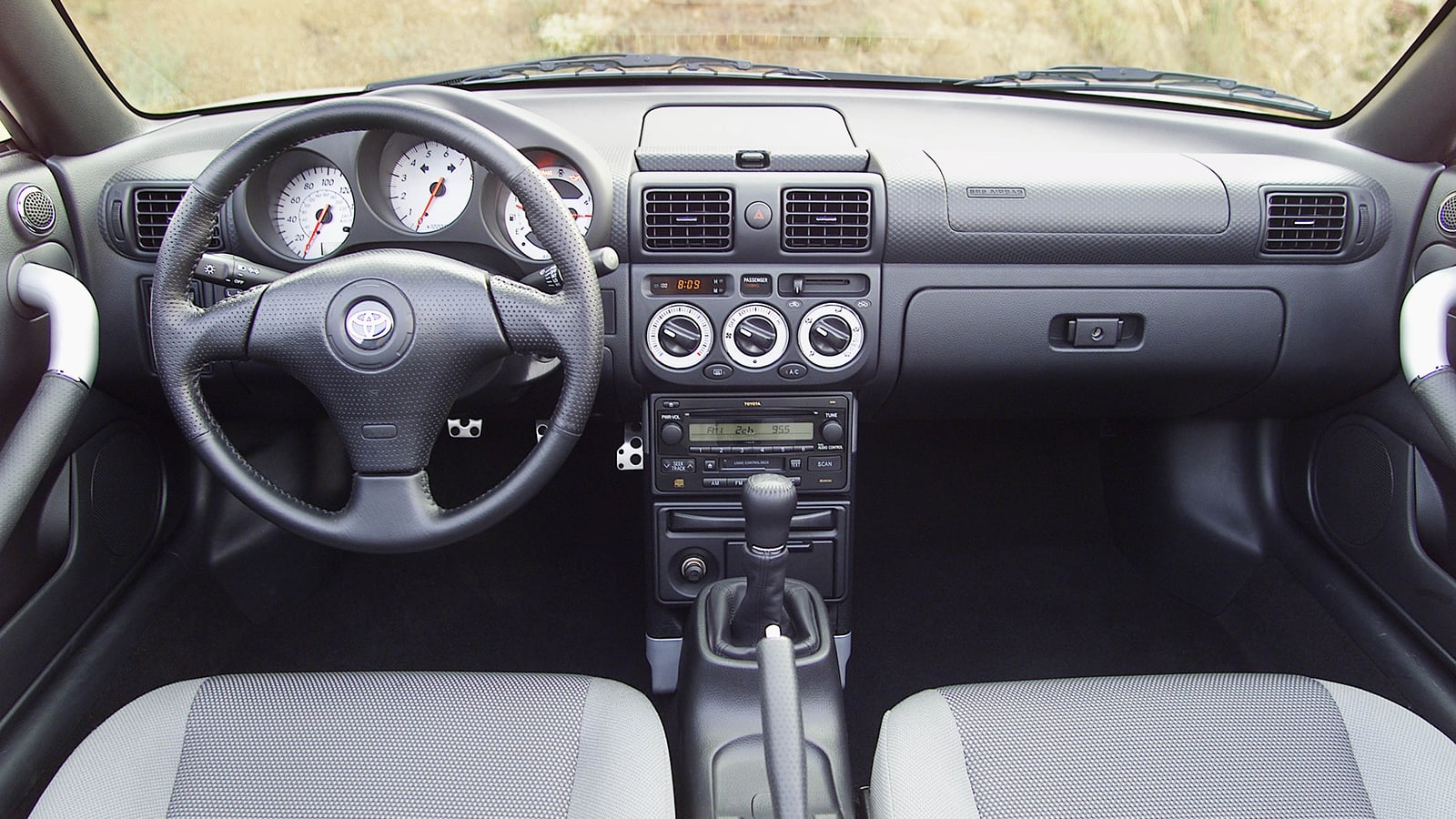 Our pick would be any of the cars with the traditional five-speed manual, and ideally a 2004 to 2005 model with the limited-slip differential. This is a car that you’ll want maximum involvement with, and a transmission with a clutch pedal is the way to go. But if you have trouble operating a clutch pedal, the sequential manual is a perfectly fine choice. You’ll even get slightly better fuel economy if you get one of the six-speed units (25 to 26 mpg combined depending on year versus 24 to 25 mpg for the five-speed).

One other note regarding the MR2 Spyder: pack light. With the engine in the back, there’s not a conventional trunk. There’s a cargo bin in the front, but it’s filled with the spare tire. There are bins behind the rear seats, at least, but they come in at just 1.5 cubic feet.

Are there any good alternatives to the MR2 Spyder?

Well, there’s a pretty obvious alternative to the MR2 Spyder. Many say it’s always the answer, and it has a similar alphanumeric-ish name: MX-5 Miata. The little Mazda that’s stolen the hearts of enthusiasts and journalists everywhere was a direct competitor then (specifically the second NB generation), and factors that made it more appealing then still apply today. It had more classic roadster styling and a real trunk, but it still was light, rear-drive and had very similar power. They’re far easier to find nowadays thanks to the strong sales, and you now have the option of multiple generations, all with similar design and feel.

Another potential option that’s a bit newer would be the Pontiac Solstice and its twin, the Saturn Sky. Both roadsters featured much more dramatic styling, and late versions had extremely potent turbocharged models. But they’re also relatively unusual, and have ergonomic and cargo compromises that make it harder to live with (the top is a hassle, the trunk is oddly shaped and some interior features are laid out strangely).