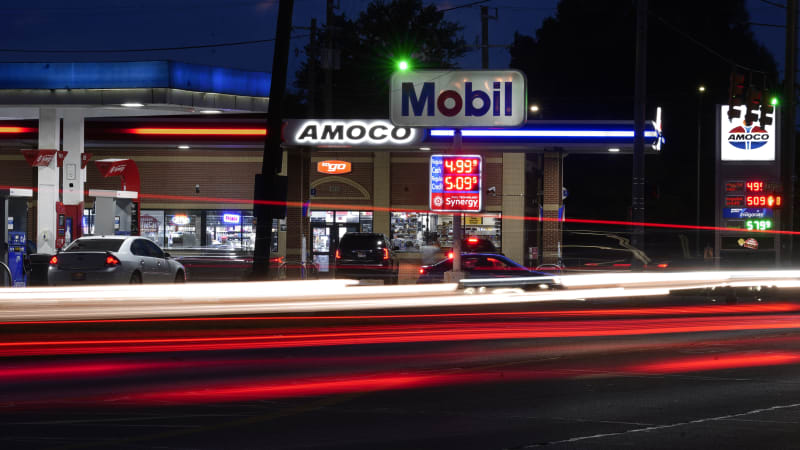 While we were all traveling on the Fourth of July weekend and otherwise enjoying our summer, we were increasing our demand for gasoline. Yet the price of the stuff did a funny thing: It fell.

AAA puts the average price of a gallon of regular gas at $4.67 on Monday. That’s down 13 cents in the past week — and down 33 cents from a month ago, when the nationwide average was an even $5 a gallon.

Obviously $4.67 for regular is still a high price and hardly means that happy days are here again, but a 33-cent reduction does represent a $6 savings on an 18-gallon fill-up.

The auto club estimates that 42 million Americans took a driving vacation on the Independence Day weekend, and gas retailers typically hike up their prices during the summer travel months. The federal Energy Information Administration (EIA) says demand in oil rose from 8.92 million barrels per day to 9.41 million b/d ahead of the holiday — that’s a 5.5% increase. Not only that, total domestic gas stocks decreased by 2.5 million barrels.

While we’re all grateful that the price of gas saw a 6.6% decrease in the past 30 days, it does seem a bit unusual in the face of a 5.5% increase in demand. But it’s an example of why gas prices are beholden, first and foremost, to the whims of the global energy market — so much so that they can defy the basic rules of supply and demand in any one individual market such as ours.

But why has crude oil fallen? Well, that’s where the principles of supply and demand do catch up. In spite of Russia’s war in Ukraine, crude oil has been falling because there’s a fear that a global recession is coming that will drive down demand. In other words, basic economic forces still apply and remind us it’s a global market and global problem.

In the past week, the average price fell 18 cents in Texas, where gas prices were already among the cheapest, and by 17 cents in Ohio and Illinois. Sky-high California prices even fell by 16 cents. Other big decreases were seen at the pump in Wisconsin (−15 cents), Indiana (−15 cents), Kentucky (−15 cents), Alabama (−15 cents), Virginia (−14 cents) and Florida (−14 cents).