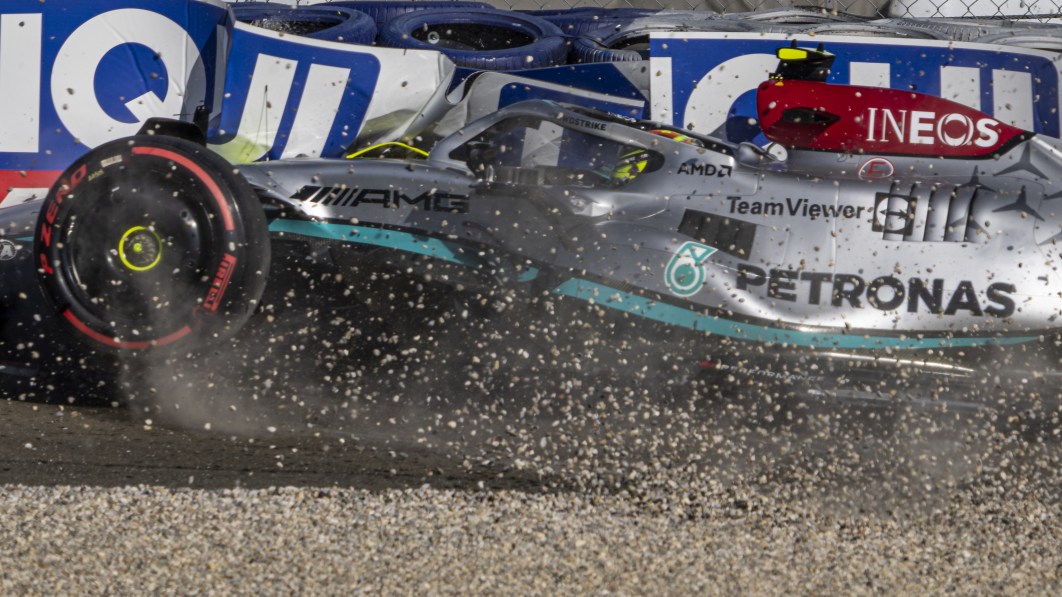 Both Mercedes cars crashed at the Austrian Grand Prix on Friday in a dramatic ending to a qualifying session that set the field for Saturday’s sprint.

Lewis Hamilton and George Russell walked back to the paddock after separate crashes, while Formula One leader Max Verstappen narrowly won the pole for the sprint race ahead of both Ferraris.

Verstappen earned his third pole of the year. Hamilton was was chasing his first since the penultimate race of last season when he misjudged a turn and slid off on Turn 8, dealing a blow to his chances of a first win since winning from pole in Saudi Arabia 12 races ago.

The seven-time world champion climbed out and inspected the mangled right front tire. He apologized to his team for a rare error.

“It was a big hit, but I’m OK,” he said later. “Incredibly disappointed in myself and so sorry to the team who worked so hard to put this car together. We were fighting for a top three, I think. I don’t have an answer for it.”

When the session restarted, another red flag came out when the rear of Russell’s car crashed into Turn 10. He was unharmed.

“I feel OK physically, just a bit concerned about the car. I wouldn’t say lucky escape because we need to review the crash damage, there’s nothing lucky or fortunate about making a mistake like that,” he said. “I absolutely went for it because I thought there was an opportunity for third.”

Russell was then summoned for walking across the track under a red flag.

Verstappen found his pace on the last attempt to edge out Charles Leclerc by just .029 seconds and Leclerc’s Ferrari teammate, Carlos Sainz Jr., by .82.

“In the end it was a really tight qualifying and it’s a really challenging track to get qualifying right,” Verstappen said. “The track temperature is dropping, the wind is picking up a little bit.”

“I’m really quite far back,” Hamilton said. “I don’t know what is possible from there, but it is a sprint race, so I hope I can make up for some lost time.”

Schumacher, the son of the great Michael Schumacher, has been buzzing since his first taste of success, albeit minor, last weekend at Silverstone.

After starting 31 races, the German scored his first points — four — from placing eighth.

Former champion Sebastian Vettel, a family friend, was cheering behind him in the final laps. Afterward, Schumacher’s sister interrupted her younger brother’s post-race interview and sprayed him with Champagne.

Schumacher said he’s been floating with “a nice and happy attitude” since then.

It was a performance he really needed after two DNFs in the three previous races led to some observers questioning his F1 future, and even more impressive considering he started from 19th.

“At the end,” Schumacher said, “it made those points so much sweeter.”

Leclerc left the British GP bitterly disappointed and struggling to contain his frustration.

He thought teammate Carlos Sainz Jr. had not moved aside quickly enough earlier in the race, and later on following a safety car, he was baffled his team kept him out for track position rather than bring him in for faster tires.

Team principal Mattia Binotto even appeared to give him a talking to afterward, rather than consoling him.

It’s the second time this season Leclerc has been bemused by team calls, following the decision to pit him for new tires when he led in Monaco — the hardest track for overtaking — and ended up fourth at his home race.

Following a dinner with Binotto in Monaco this week, Leclerc insists there are no divisions within Ferrari.

“This is really untrue. And I wish I didn’t have to get (into this) because this is the exact question I’ve got everywhere else. We are extremely united,” Leclerc said. “There’s some kind of disappointment, too. But there’s not any kind of division inside the team, that’s for sure.”

Leclerc does think Ferrari needed to improve “the communication throughout the race” after what happened at Silverstone and in Monaco.

Silverstone was exasperating for Leclerc because Verstappen dropped points by finishing seventh and Leclerc could have better closed the gap — rather than being 43 points behind heading into Austria.

Leclerc won two of the first three races of the season to pull clear of Verstappen but he’s slipped to third overall. His last podium was second in Miami and since then he’s had two DNFs, placed fourth twice, and fifth once.

“The last five races have been quite hard on me,” Leclerc said. “I just wanted to stay home (after Silverstone), disconnect a bit from everything.”

Austria is the second race this season featuring a sprint race, where the winner collects eight extra points. Verstappen overtook Leclerc to win it in Imola then won the race with a fastest lap bonus for a maximum of 34 points overall.

Verstappen, who has won four times at the Red Bull ring in Spielberg, topped the first practice ahead of Leclerc and Russell.

The race weekend is sold out with 300,000 fans expected over the three days at the circuit nestled among the rolling hills of Styria.

Valtteri Bottas will start from the back on Sunday after going over an allocated number of engine-part changes.

Team budget caps of $140 million will be increased by a maximum 3.1% in 2023 to allow teams to cope with rising inflation, F1 said following a commission meeting.

The 2021 cap of $145 million was reduced again to help smaller teams better compete.

Also, the application of technical directives aimed at further addressing bouncing issues has been moved from the July 22-24 French GP to the Aug. 26-28 Belgian GP, following the summer break. F1 said this gives teams more time to make “updates to plank and skid assemblies.”