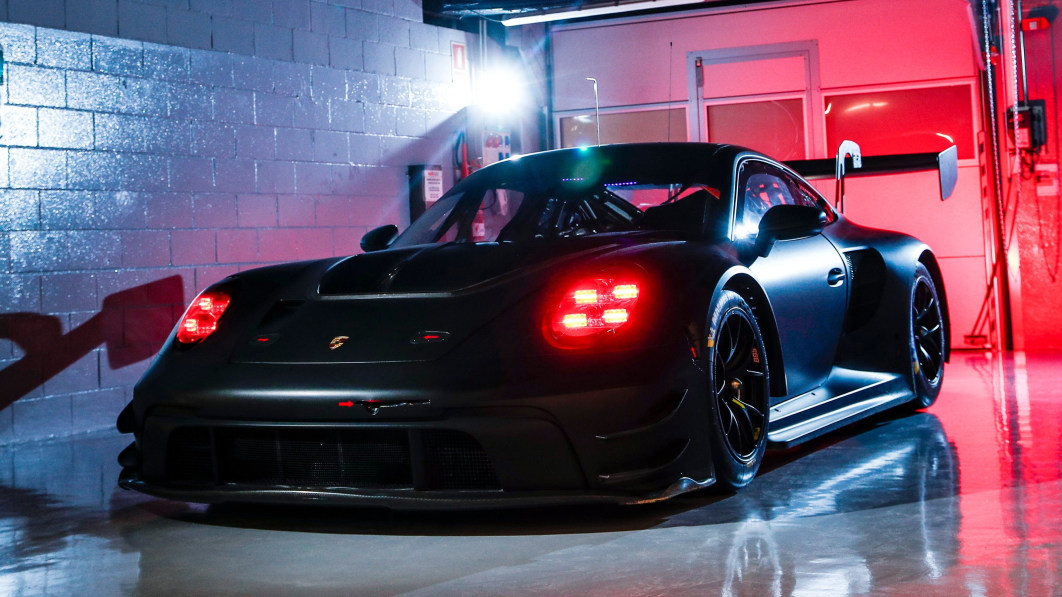 Porsche released the current, 992-generation 911 for the 2019 model year, but it still races the last-generation model in GT3-sanctioned events around the world. It’s nearly ready to unveil the next GT3 R, and a video posted on social media reveals what the car sounds like.

Published on Twitter, the five-second flick shows a black 992-based 911 GT3 R prototype dropping to the ground and speeding out of the pits. The winged coupe sounds like it means serious business as it races onto the main part of the track, but Porsche stopped short of revealing the type of engine that’s singing. It’s a flat-six, of course, but the German company simply referred to it as a “?-liter” engine. For context, the outgoing GT3 R is powered by a naturally-aspirated, 4.0-liter flat-six rated at 550 horsepower.

In a separate post, Porsche gave enthusiasts an early look at the demon-eyed race car. We can tell that the lessons learned from years of successfully racing the 991-based model permeated the development process. The body kit has been fully redesigned, the air intakes chiseled into the quarter panels look bigger, and the rear wing is mounted on a set of swan necks. There’s a spoiler that’s almost ducktail-like below the wing, a light bar that echoes the production car’s rear-end design, and a massive diffuser under a pair of round exhaust tips.

Porsche will unveil the next-generation 911 GT3 R before the end of the summer, and we should see it line up on a starting grid shortly after. And, since the track-only GT3 R is around the corner, it stands to reason that the street-legal GT3 RS isn’t very far behind.