Monterey Car Week is like a debutante ball for supercars, each high-horsepowered hopeful announcing itself to be of good age, etiquette and parenting, and looking for a worthy home. Next up for a planned introduction to the suitors who will crowd the Monterey Peninsula next week is the Hennessey Venom F5 Roadster. The debut happens August 19 at Monterey Car Week’s The Quail, A Motorsports Gathering. The teaser image gives us a clue of what to expect, filling in the blanks should tax too much of the imagination.

Behind the airier cockpit is the same 6.6-liter twin-turbo V8 apparently based on GM’s LS architecture. With a redline at 8,000 rpm, the mill nicknamed “Fury” will spin out 1,542 horsepower and 1,193 pound-feet of torque on regular premium gas, 1,817 hp when given E85 to drink. Those prodigious mechanical facts are shunted through a seven-speed automated manual transmission to the rear wheels only. In the coupe, that results in accelerating acceleration up to 124 miles per hour; it takes 2.6-seconds to get to 62 mph, 4.7 seconds to hit 124 mph. Assuming enough runway and courage, 15.5 ticks of the second hand can see a driver to 250 mph. Hennessey claims a 311-mph practical top speed for the hardtop and a theoretical 328-mph terminal velocity, but so far as we know, prototypes have “only” touched 271.6 mph to now. 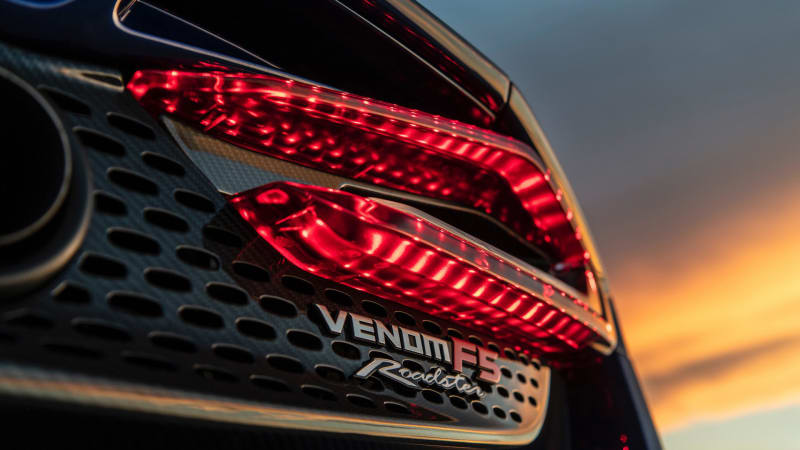 The Texas car creators began delivering the Venom F5 coupe late last year, the entire run of 24 examples already sold. According to Top Gear and Autocar, the Roadster will field a more populous run of 30 units, around seven of which are claimed at a rumored price of $2.75 million apiece. If that’s true, shoppers who like their hair mussed the natural way are paying a $1.15 million premium over the Venom F5 coupe’s price to have that done. We’ll get all the details from the source next week. Also, with a high-downforce version of the F5 supposedly planned after the Roadster, there’s probably a dais at next year’s Quail already reserved.