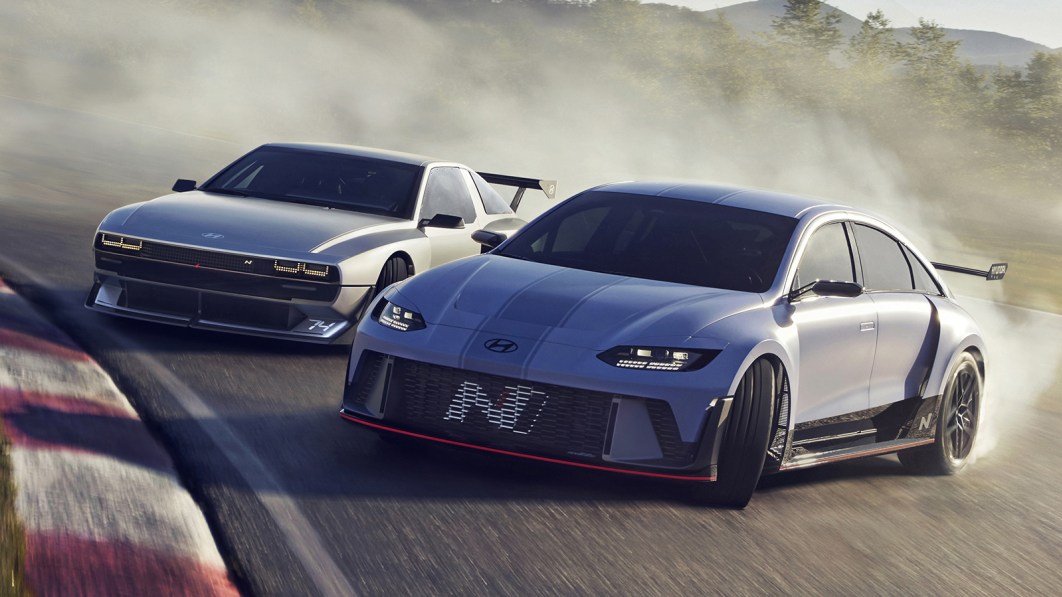 Hot on the heels of Hyundai Ioniq 6 details are, well, hot Hyundais. That’s because “N-Day” has arrived, and the company has a couple of concepts to illustrate what the performance division has in mind for the future. It’s all electric, but not purely battery powered. One of them features a hydrogen fuel cell.

Notably absent from display is the already confirmed Ioniq 5 N. But Hyundai hasn’t forgotten about it. It will launch in 2023. In the meantime, let’s check out these Hyundai concepts.

Although it very obviously is based on the Ioniq 6, the first of these concepts is called the RN22e. The R stands for “rolling lab;” the N for, well, N; the 22 for this year, and the e for “EV.” It’s a bit awkward, but it also fits in with Hyundai’s naming scheme for its performance prototypes. That Veloster N TCR electric race car prototype was RM20e, the M signifying the mid-engine layout used on it and its internal-combustion predecessors.

The body isn’t the only thing shared with the Ioniq 6, though with much wider fenders and a front splitter and rear wing. It features the same type of E-GMP battery and motor platform used by the Ioniq 6, 5 and other Hyundai Motor Group products. In fact, the specs line up with the upcoming Kia EV6 GT. It has dual motors making a combined 577 horsepower and 546 pound-feet of torque, and it has a 77.4 kWh battery pack. It also has a rear limited-slip differential. In the case of the Hyundai, it’s a dual-clutch unit that allows for torque vectoring. Other Hyundai-specific upgrades include the four-piston brake calipers and even larger 15.75-inch rotors.

Hyundai is trying out some interesting technologies on this test car, too. It’s testing to see how it can use regenerative braking to adjust the car’s handling, changing how much is applied front and rear. And since sound and vibration are a big part of current performance cars, Hyundai is experimenting with something called N Sound+, which applies artificial sound and, yes, vibrations through the chassis, to make the car feel more exciting.

The N Vision 74 is a far more unusual concept. It has a better name, too. N Vision is pretty self-explanatory. As for the 74 part, it’s a reference to the 1974 Hyundai Pony Coupe concept designed by Giorgetto Giugiaro, which is the inspiration for this car’s design. It shares the same basic shape with crisp lines and sharp corners. But it gets the pixel-style lights from Ioniq models and extensive aerodynamic modifications, not to mention huge overfenders.

Propulsion comes via two electric motors at the back, one for the left and the other for the right. This enables advanced torque vectoring. Total output is more than 670 horsepower and more than 664 pound-feet of torque. Energy is stored in two ways. It has a 62.4-kWh battery pack, which would allow for quite a bit of battery range. But if that’s not enough, there’s also a 4.2-kg hydrogen fuel tank with an 85-kW fuel-cell stack for generating electricity. It would also allow for quick refueling, instead of relying on plug-in charging, though it seems either would be allowed. Hyundai estimates total range for the N Vision 74 would be more than 373 miles.

How close are they to reality?

Hyundai didn’t say anything about either of these cars seeing any kind of production. They’re mainly for testing future technologies that could appear in future models. It seems to us that the RM22e has more features that could appear soon, maybe even as early as the Ionq 5 N next year. And it would certainly seem possible for an Ioniq 6 N to appear sometime after the 5. The 74 seems like a long shot, but perhaps the powertrain could appear in the future. If not the hydrogen powertrain, possibly the fancy dual-rear motor setup. We’ll be very curious what comes of these prototypes.