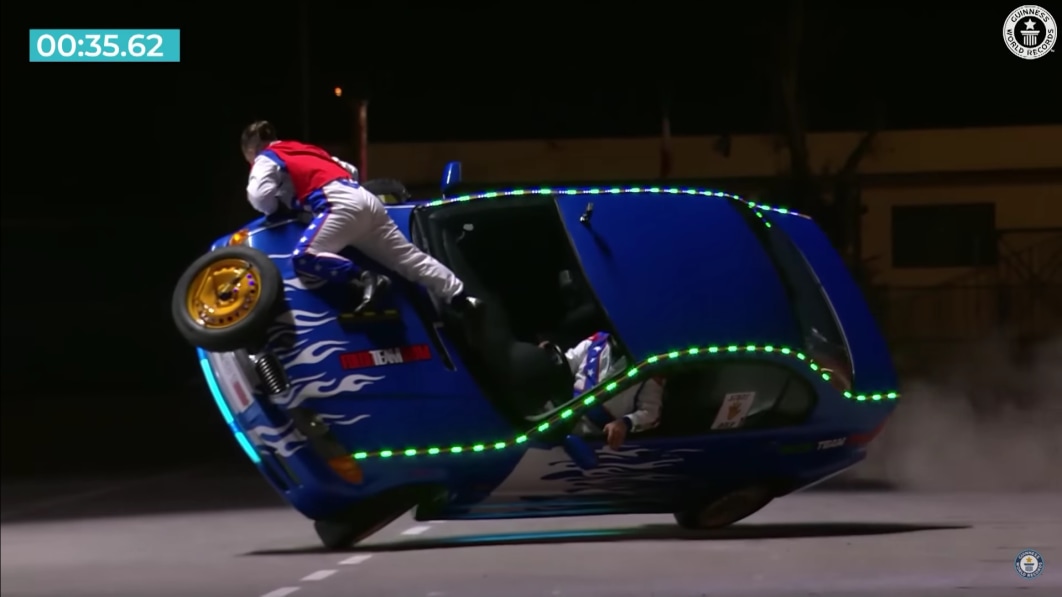 Changing a wheel sounds like one of the least exciting ways to etch your name into the Guinness Book of World Records. Unless the car is moving, of course. An Italian team got good enough at this odd skill that it broke the existing record by pulling it off in a little over a minute.

The time to beat was 1:30, according to Guinness, and Manuel Zoldan and Gianluca Folco smashed it by changing the passenger-side front wheel on an E46-generation BMW 3 Series in 1.17:64. This feat would be nearly impossible to achieve with the four wheels touching the ground, so one carefully and slowly drove the sedan on its driver-side wheels while the other hung over the passenger-side fender.

Several steps were taken to make the swap a little easier. The wheels being changed appear to be space-saver spares, so they’re lighter than the standard wheels that BMW fitted to the E46, and the yellow one installed on the car when the stunt begins is fitted with a handle. That’s not to say it was easy, though. The E46’s wheels are held on with studs rather than with bolts, so they need to be centered before they’re secured, and there are five per wheel. We imagine that using a car with three- or four-hole wheels could speed this up even more.

Browsing through the Guinness Book of World Records reveals several other wheel-related achievements that you might not know exist. Four mechanics from Germany managed to change the four wheels on a first-generation Ford Focus without using power tools in merely 59.62 seconds, for example. In 2018, Germans also set the record for changing the wheels on a forklift, which checks in at 1:09.