I find plenty of 1950s Detroit vehicles in the big self-service car graveyards I frequent, but most of them are fairly ordinary sedans that never stood much chance of getting fixed up and put back on the road. Such is not the case with today’s Junkyard Gem, which is a top-trim-level, heavily optioned hardtop coupe from one of the most desirable model years of the tailfins-and-chrome postwar era. 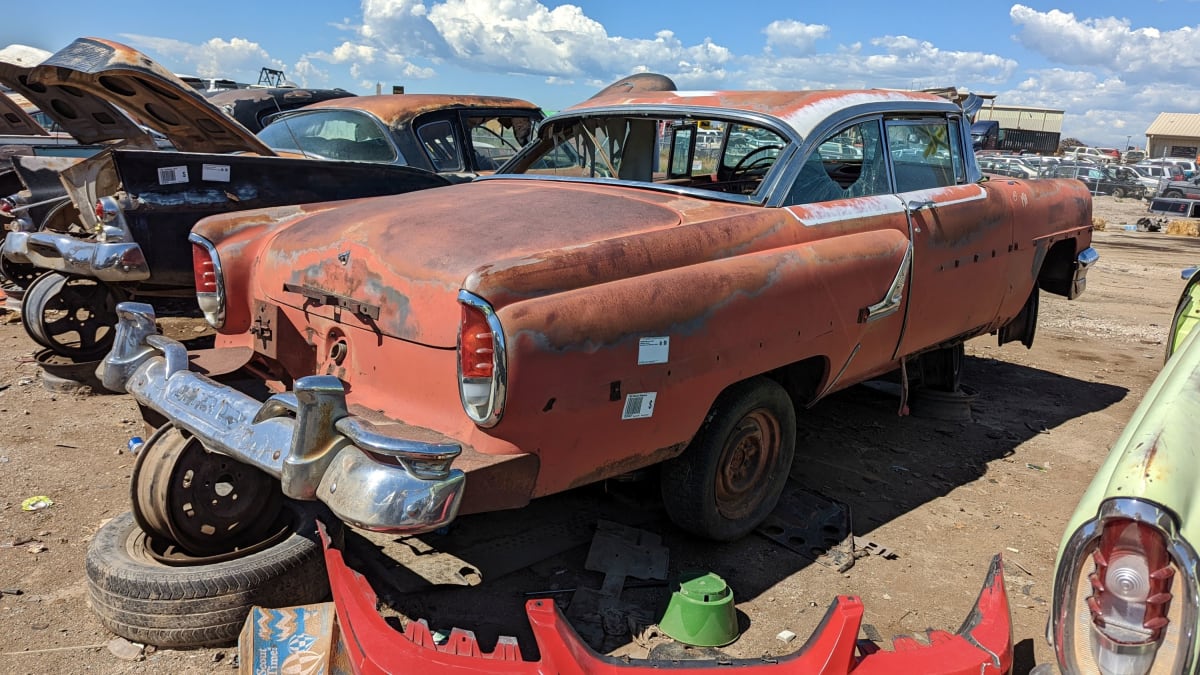 Nearly every Mercury model ever made was a Ford model with some cosmetic changes applied, and the ’55s looked very similar to their mechanically identical Ford brethren. 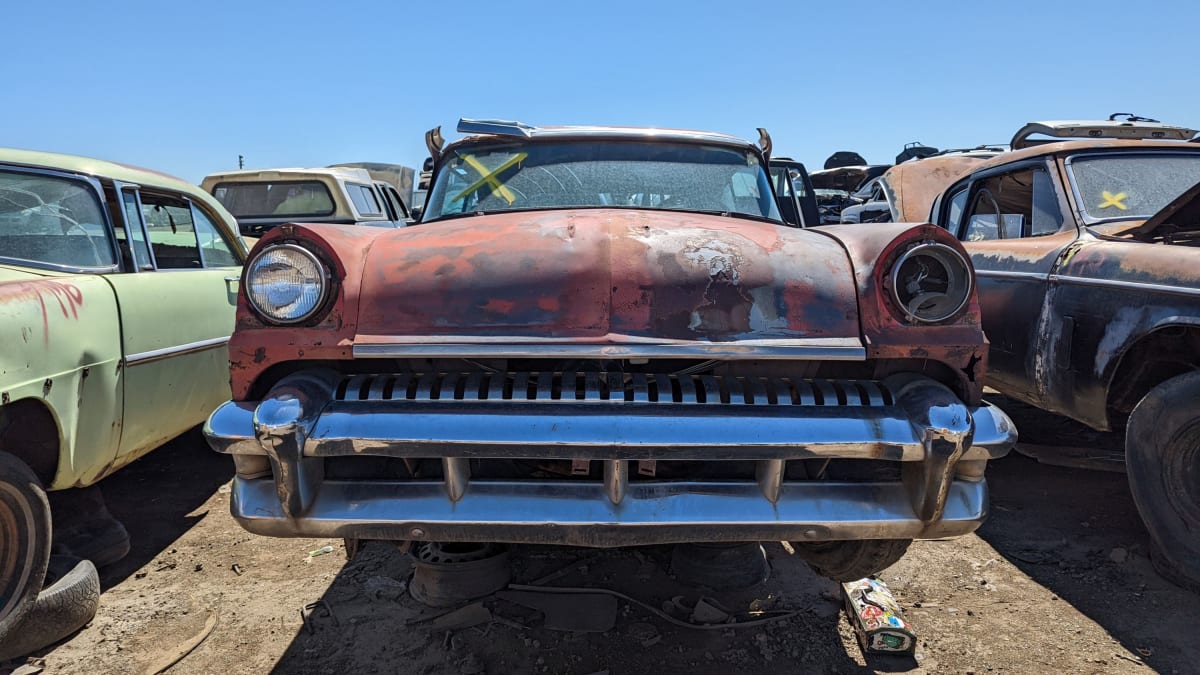 In 1955, the new Mercury came in three trim levels: the entry-level Custom, the medium-zoot Monterey, and the glitzy Montclair. Each was available as a hardtop coupe and four-door sedan, with wagon versions of the Custom and Monterey. The Montclair could be purchased as a convertible or with the wild “Sun Valley” glass roof. 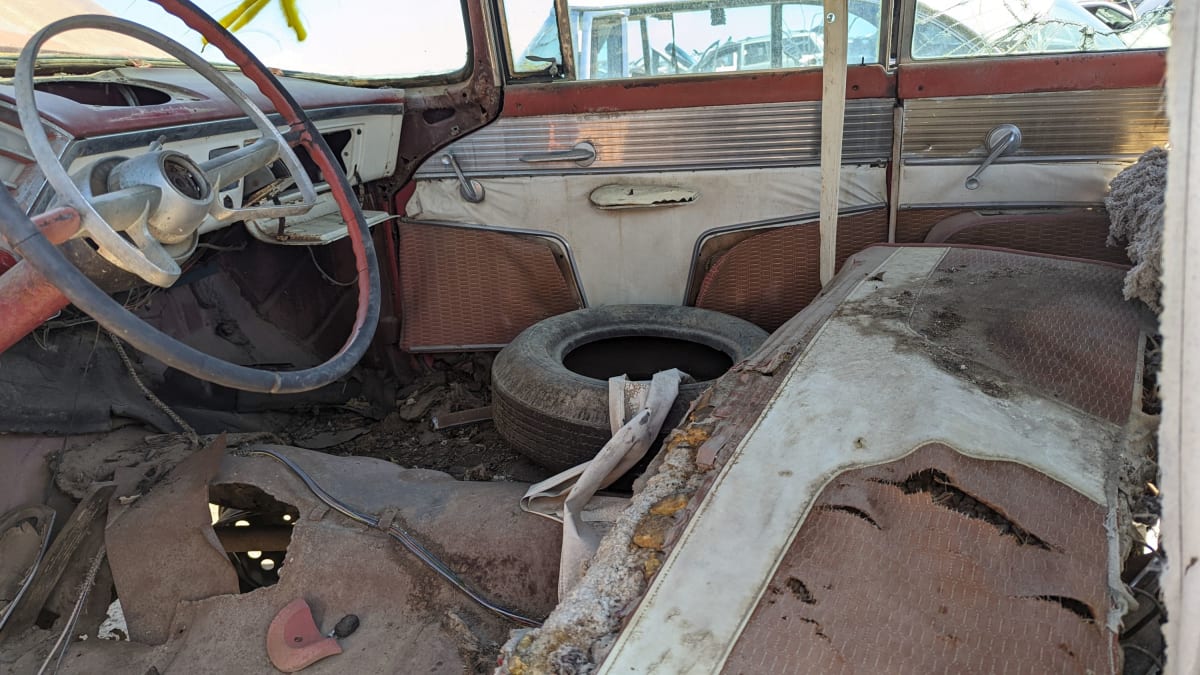 The Montclair got its own line of hallucinogenic two-tone interiors, in order to make the daily lives of Europeans feel even more gray and penurious (the UK only dropped food rationing in 1954, and the two Germanies were still clearing the rubble of their blown-up cities). This car’s upholstery has been bleached by decades of sitting outside in the harsh High Plains climate, but it started out as vivid red and white “Chromatex” fabric. 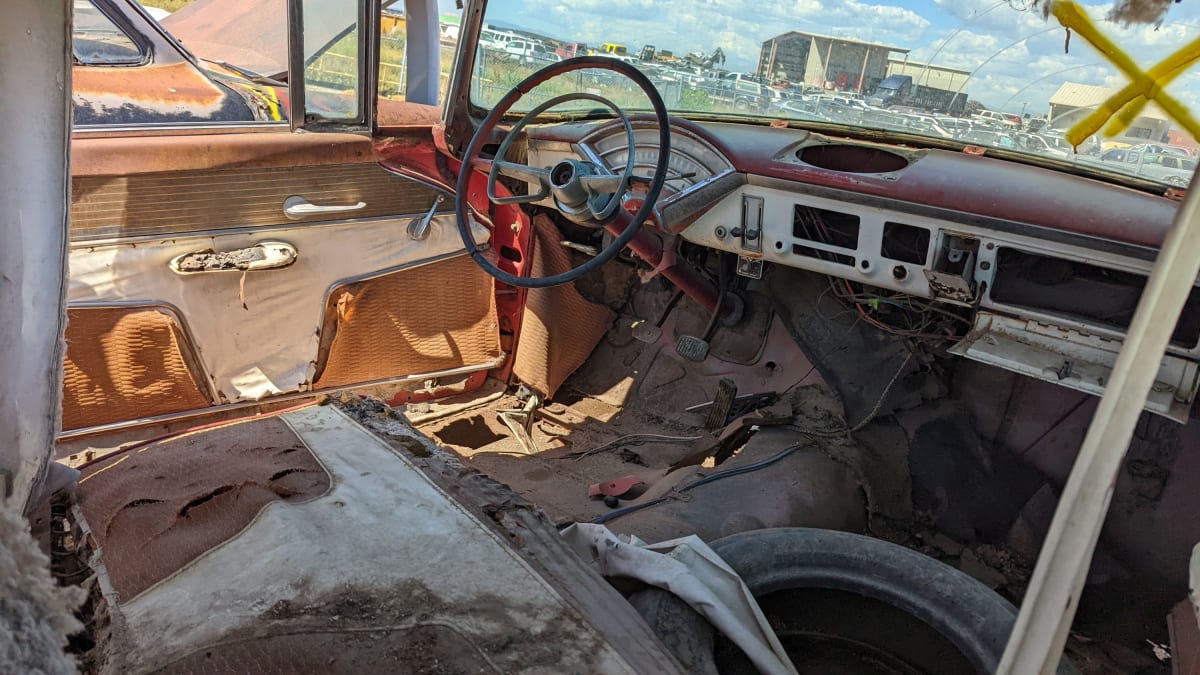 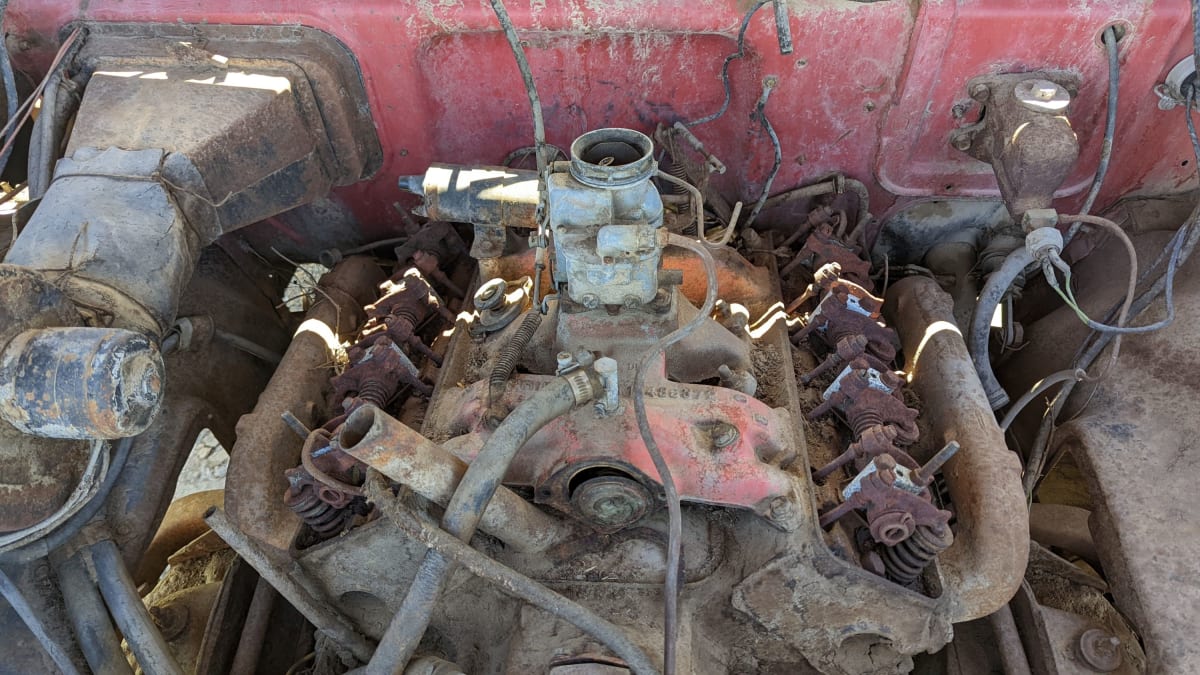 Oldsmobile had been selling new cars with overhead-valve V8s since the 1949 model year, while Ford didn’t ditch the Model A-era flathead V8 for new U.S.-market cars until the 1954 model year (you could buy a new Simca Esplanada in Brazil with an Ardun-headed Ford V8-60 all the way until 1969). GM’s Chevrolet Division got all the press in 1955 with the introduction of the brand-new small-block V8 engine, but Ford’s 292-cubic-inch (4.8-liter) Y-Block V8 made more power than the 265-cube (4.3-liter) Chevy and the 324ci Olds Rocket 88. 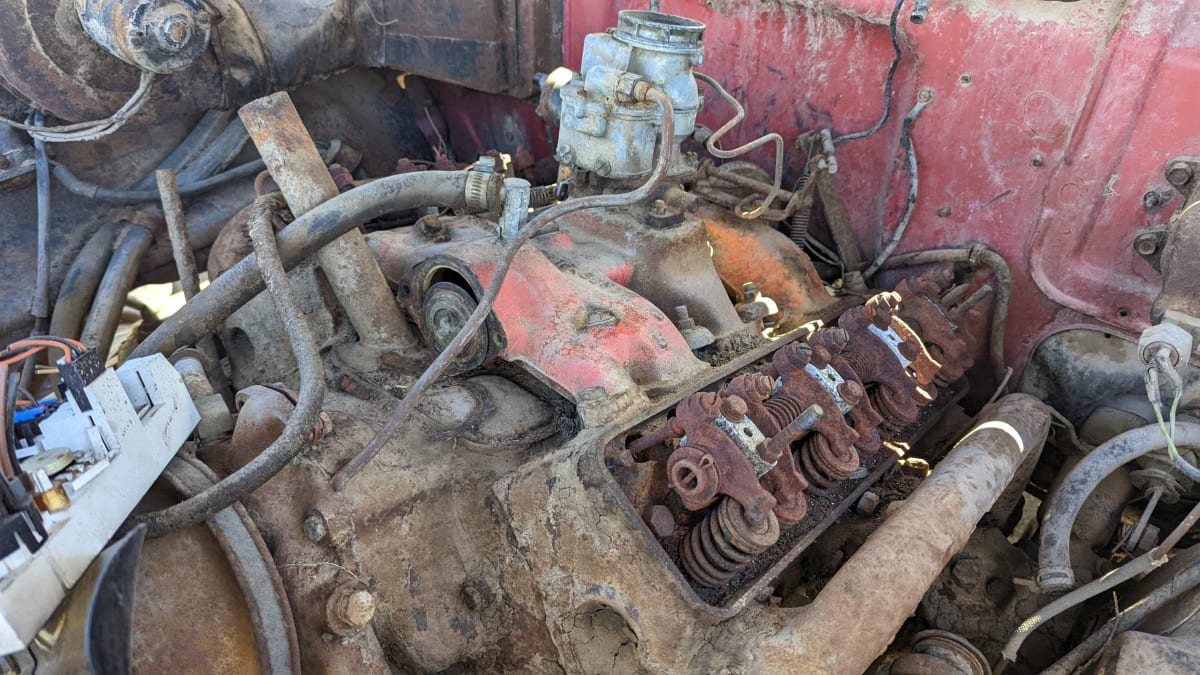 Of course, the small-block Chevy went on to have a much longer and more illustrious career than did the Ford Y-Block (which proved to be an evolutionary dead end and departed the North American scene after 1964, after years of truck-only use). That said, the Montclair’s 292 was rated at a mighty 195 horsepower in 1955; if you thought that wasn’t enough, you had to spend big bucks to get something like a Hemi-equipped Chrysler 300 (named for its horsepower rating). Worth noting, however, is that all the ’55 Mercury engines came with four-barrel carburetors as standard equipment and this car has a plain old two-barrel; we can assume an engine swap— or at least an intake manifold swap — or two, figures into its past. 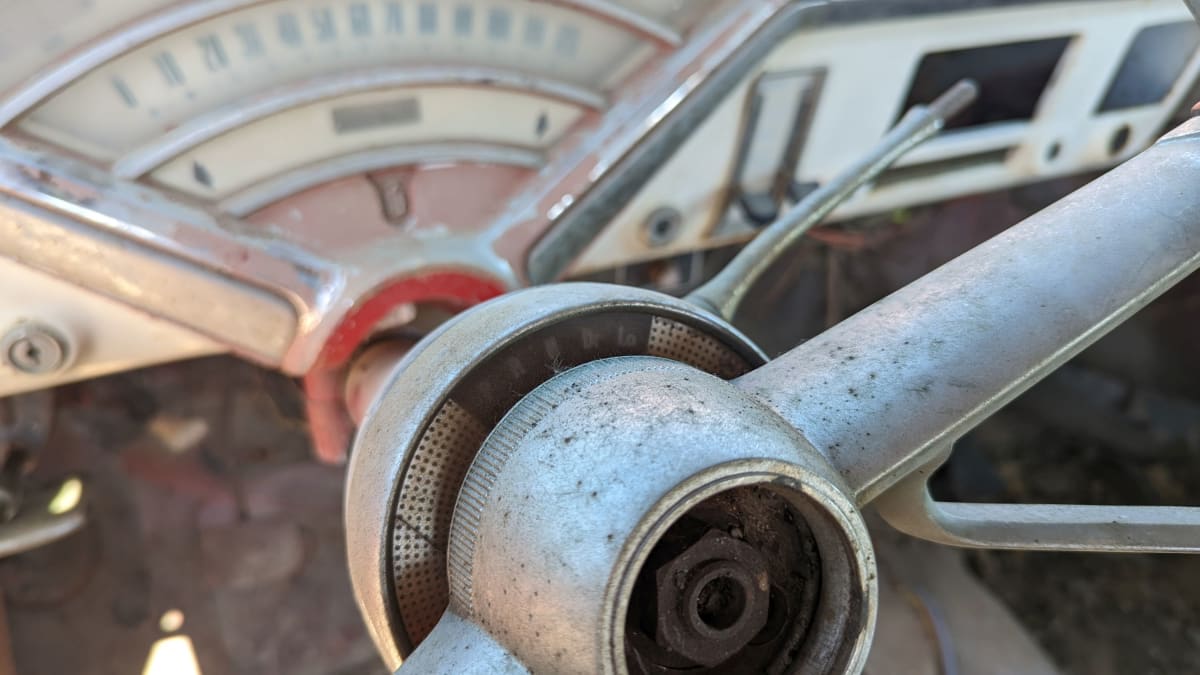 A three-on-the-tree column-shift manual was the base transmission in all US-market 1955 Mercury cars, but this one has the optional Merc-O-Matic three-speed automatic. The Ford version was known as the Ford-O-Matic, while it was called the Turbo-Drive when installed in a Lincoln. 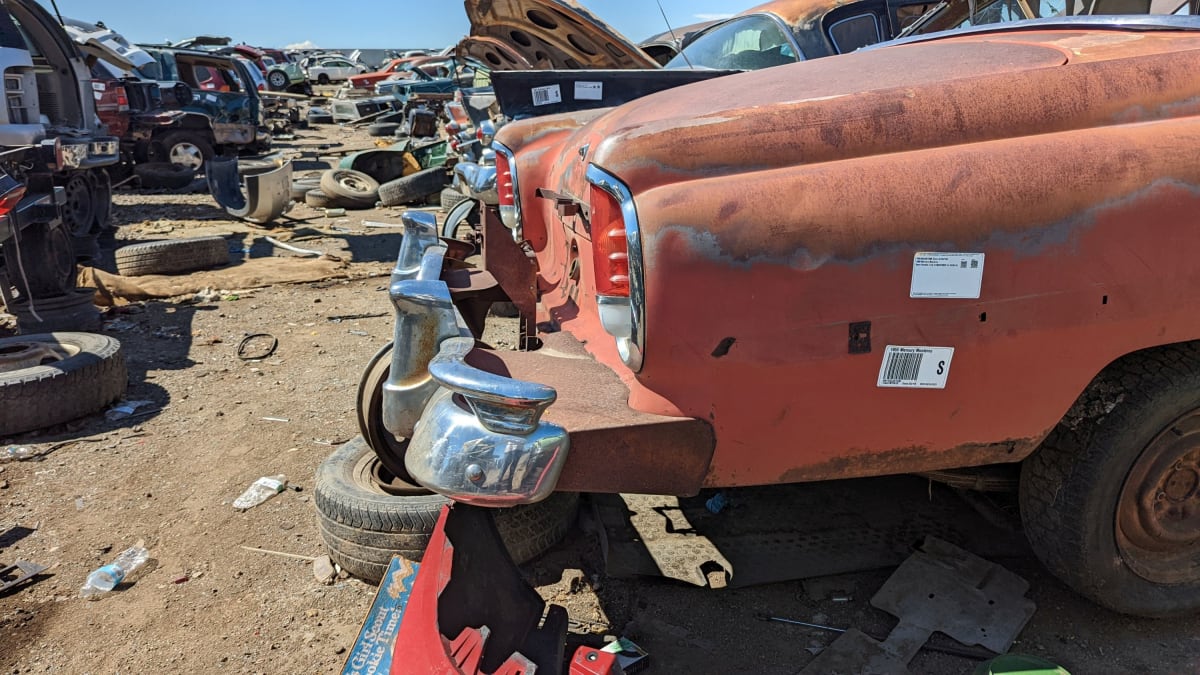 If you really wanted righteous Mercury style in 1955, you needed a “Continental kit” to put the spare tire atop the rear bumper. This one looks like an aftermarket unit, which you can still buy new today. 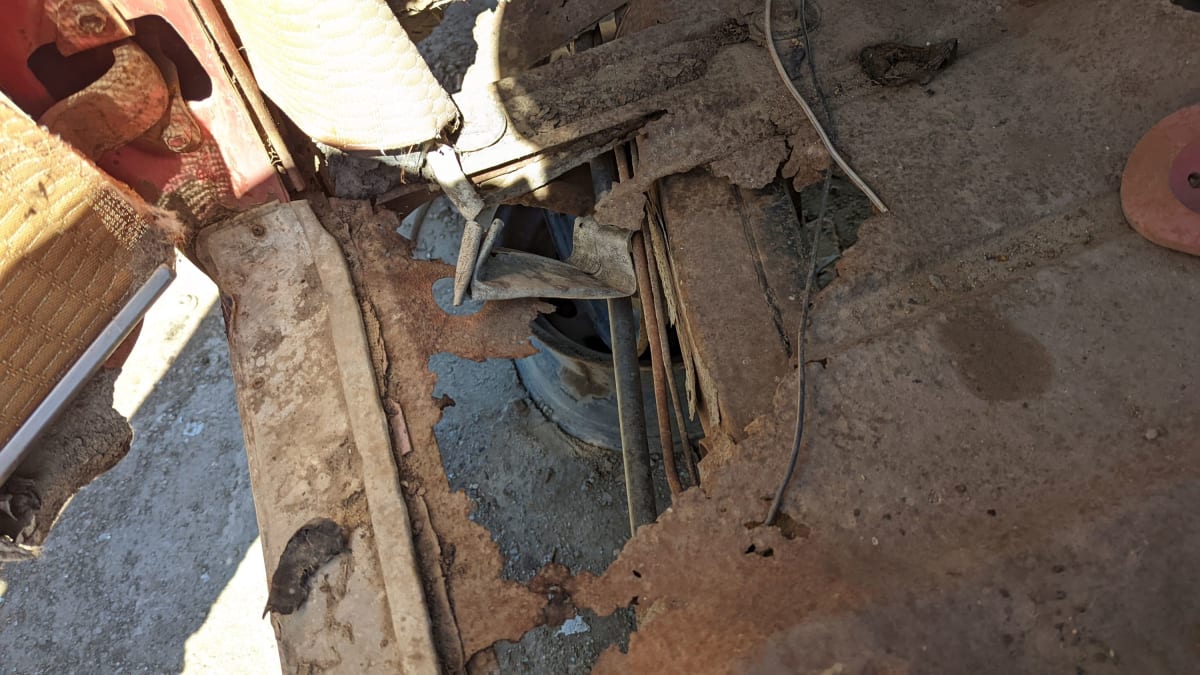 A similarly equipped ’55 Montclair Coupe just sold at auction for 46 grand, so why didn’t anyone rescue this one and restore it? I’d say the extensive corrosion is the main culprit for this car’s grim fate. 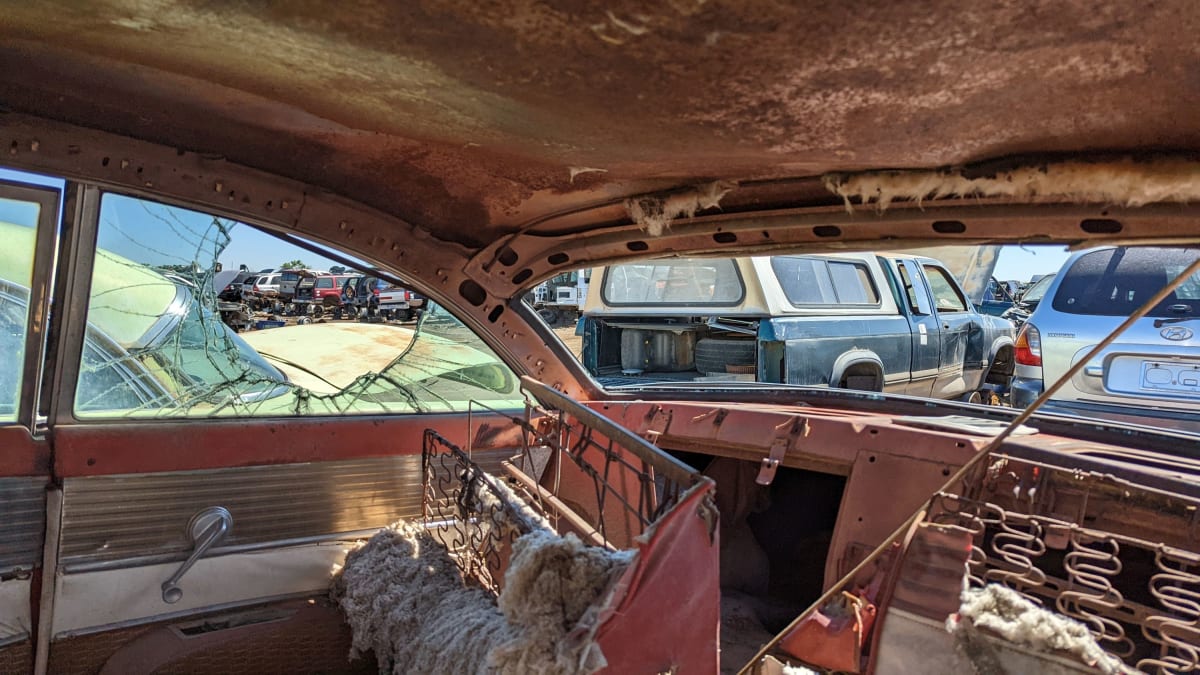 We can assume that the basket-case interior, nuked by decades of windowless exposure to the elements, also scared away potential rescuers. In the end, it will just be scrap metal.

Within a few years, Mercuries had become much more ponderous and overdecorated, though the styling improved greatly — as it did with most cars, worldwide — during the middle 1960s.