If you’re poking around in your local car graveyard and you want to find cars with extremely high final numbers showing on their odometers, my suggestion is that you look for clean-looking Mercedes-Benzes, Toyotas, Volvos, and Hondas of the 1980s and 1990s. These machines have the combination of six-digit mechanical odometers and excellent build quality that will make your search easier (I’ll bet I’ve walked past plenty of half-million-mile 1980s Detroit trucks during my junkyard travels, but there’s no way of telling how many times a five-digit odometer has been turned over during its life). Prior to today, the highest odometer reading I’d seen on a discarded Honda product was from a 1983 Accord with 411,794 miles, followed by a 1991 Accord showing 394,057 miles and a 1995 Integra that traveled 342,768 miles (I’d thought I had a 497,657-mile 1991 Civic in the bag a while back, but it turned out to be a Canadian-market car with a metric speedometer). Today’s Junkyard Gem, found in a Colorado self-service yard recently, not only beats those cars, it vaults Honda past Toyota and Volvo in my personal high-junkyard-miles record book. 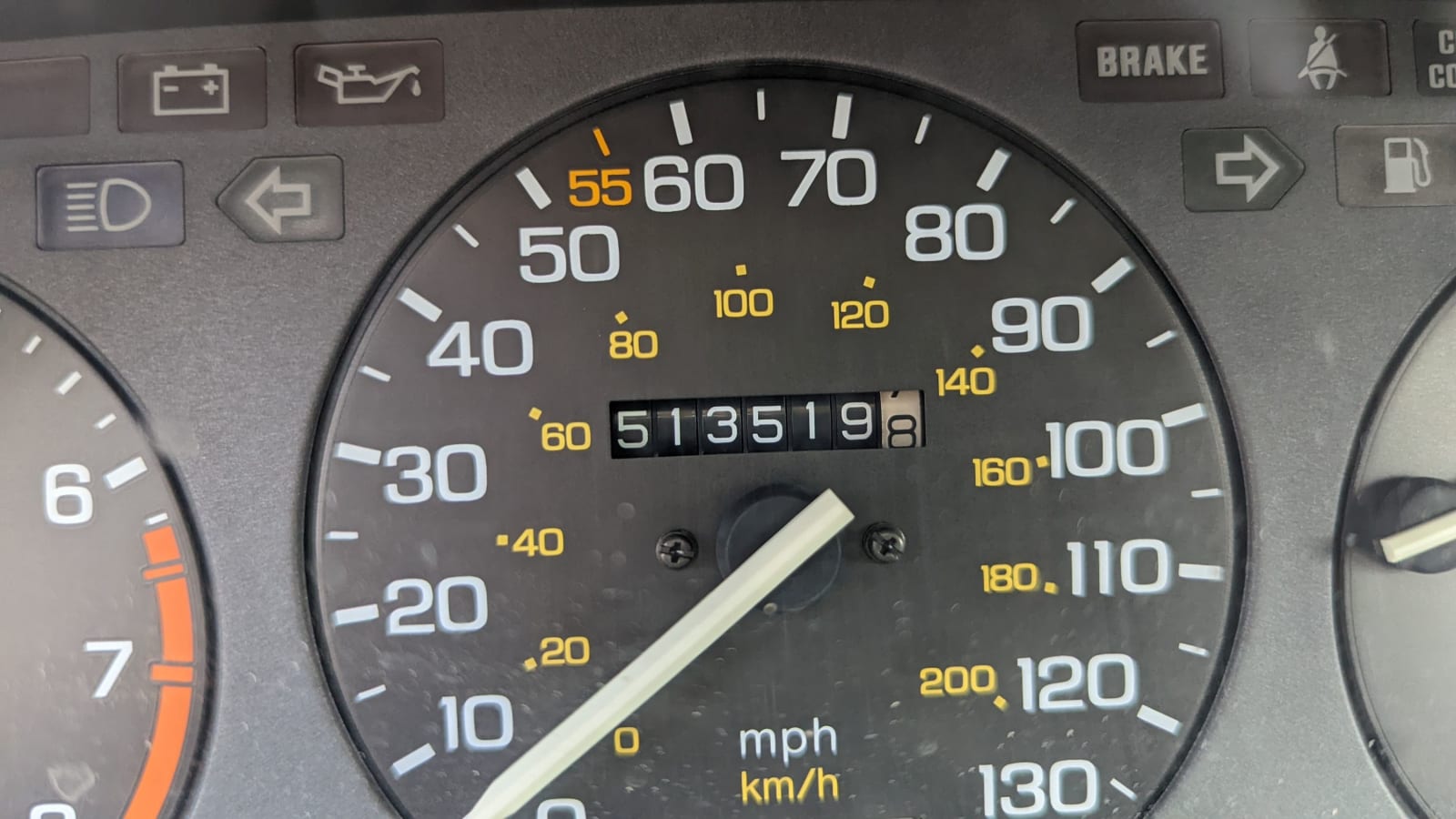 The top-mileage junkyard Toyota I’ve found was a 1988 Tercel 4WD wagon, which drove 413,344 very slow miles during its life on the road. Volvo had a strong showing with a 1990 740 Turbo wagon that reached a very impressive final mileage total of 493,549 miles. I’m sure I’ve seen Coronas and Amazons with even more miles, but their five-digit odometers obscured their true mileage. 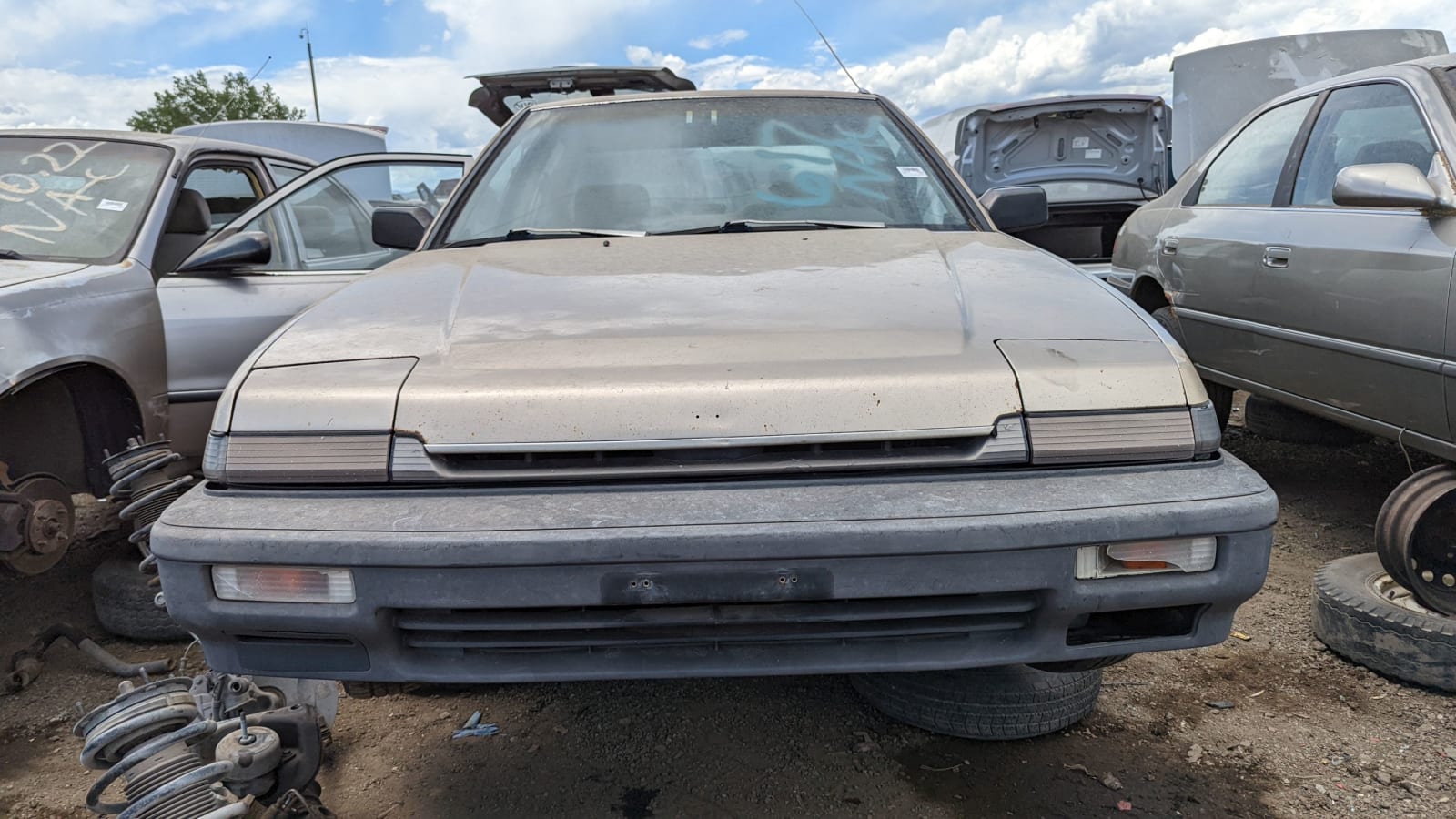 So, Honda now beats everybody in my Junkyard High Mileage Hall of Fame… well, except for Mercedes-Benz, of course. Our friends from Stuttgart have set the bar very high in that department, what with such machines as a 1987 190E with 601,173 miles, a 1981 300SD with 572,139 miles, and an apocalyptic 1985 300SD with 535,971 miles (and I know that some of the five-digit odometers in the W108s and W110s I’ve seen must have been hiding proof of galactic-grade travel distances). Because of those three, I think it’s going to take quite a while before Mercedes-Benz loses any of its spots in the top three mileage positions. If I had to predict the most likely car to accomplish the feat, though, I’d bet on either a Toyota Previa or a second-generation Accord. 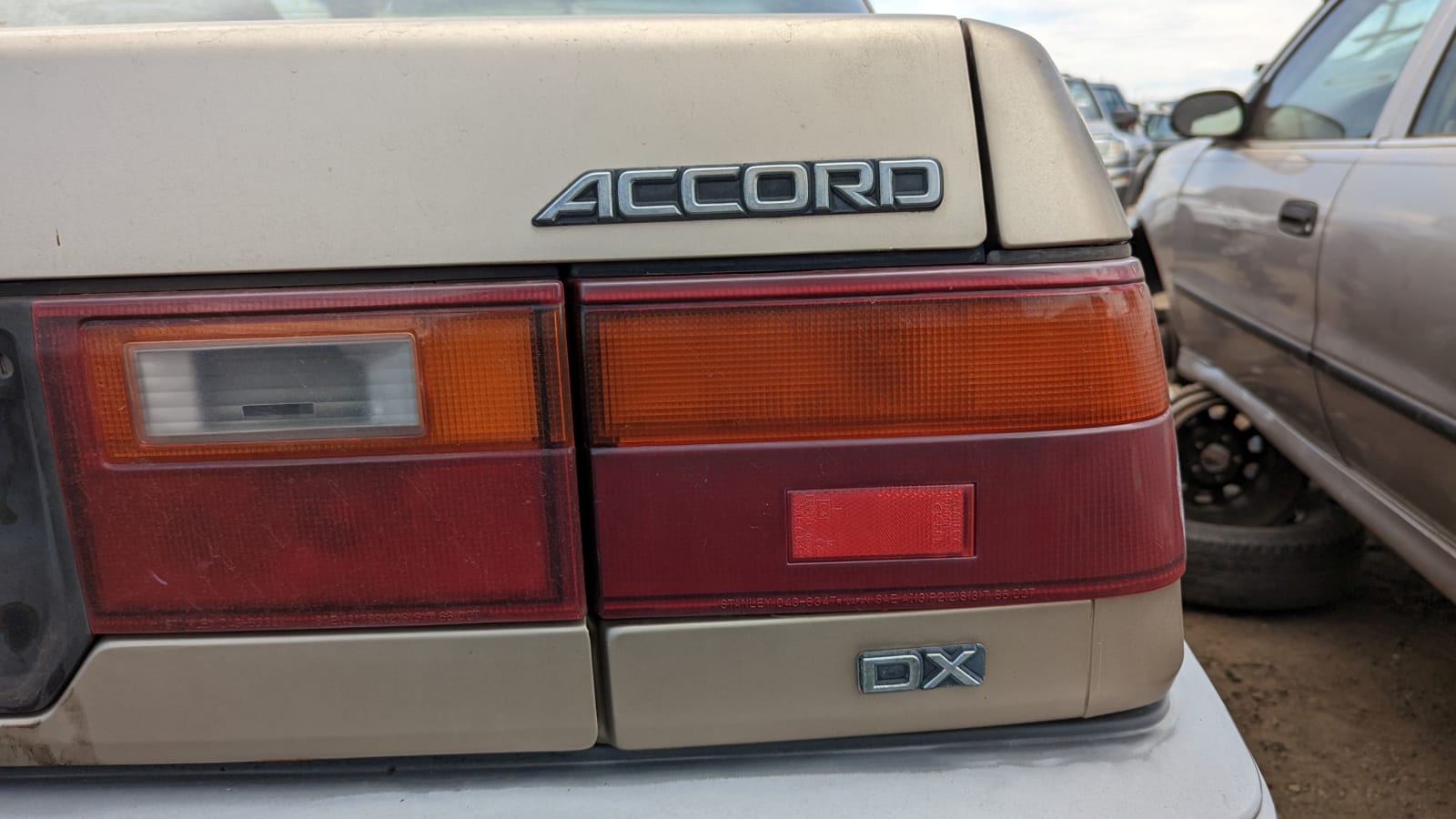 The DX was the cheapest trim level for the 1988 Accord; the DX hatchback had a list price of $10,535 and the DX sedan started at $11,175 (that’s about $26,615 and $28,230, respectively, when considered in 2022 dollars). Of course, it was nearly impossible for an American car shopper to get a new Accord (or Civic) at list price during the late 1980s, thanks to some questionable dealership hijinks at the time. 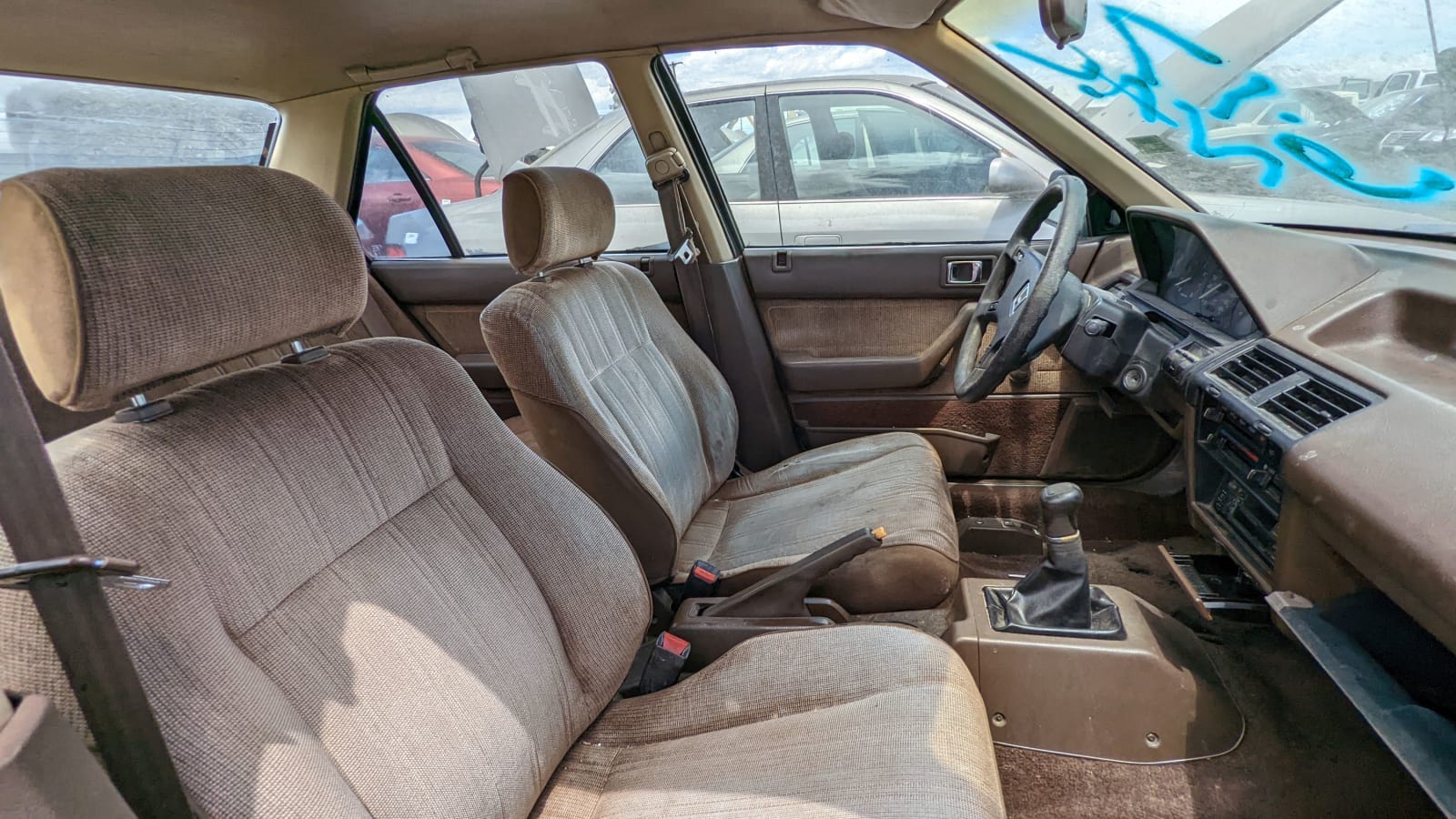 With some notable exceptions, most junkyard cars I find with exceptionally high miles have straight bodies and unshredded, if faded, upholstery. That’s because the kind of owners who keep their cars looking nice also tend to be the kind of owners who take care of every preventive-maintenance item on the dot. Would you guess that this car had traveled a distance much greater than the round-trip to the Moon and back, looking at those well-cared-for seats and door panels? 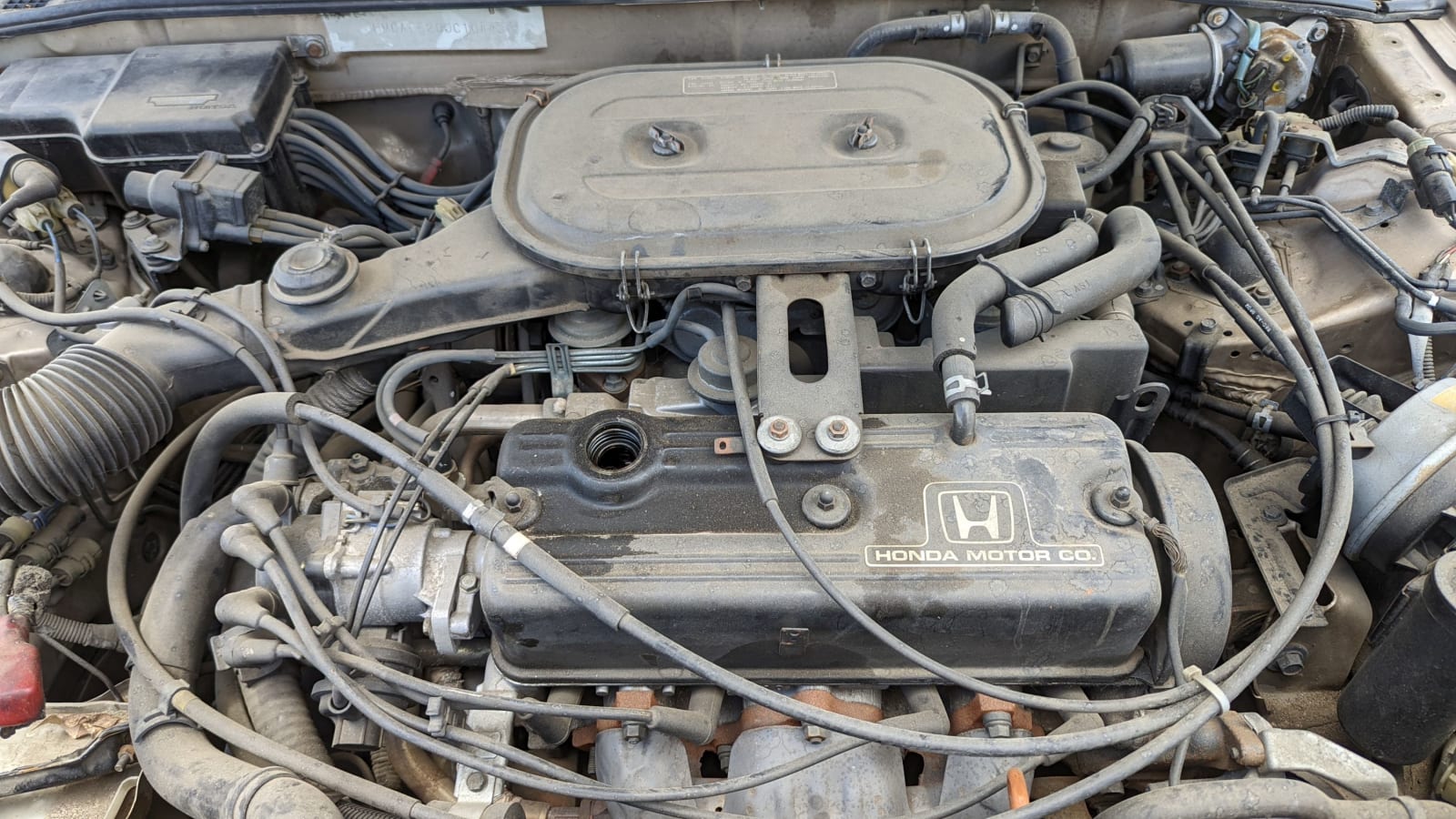 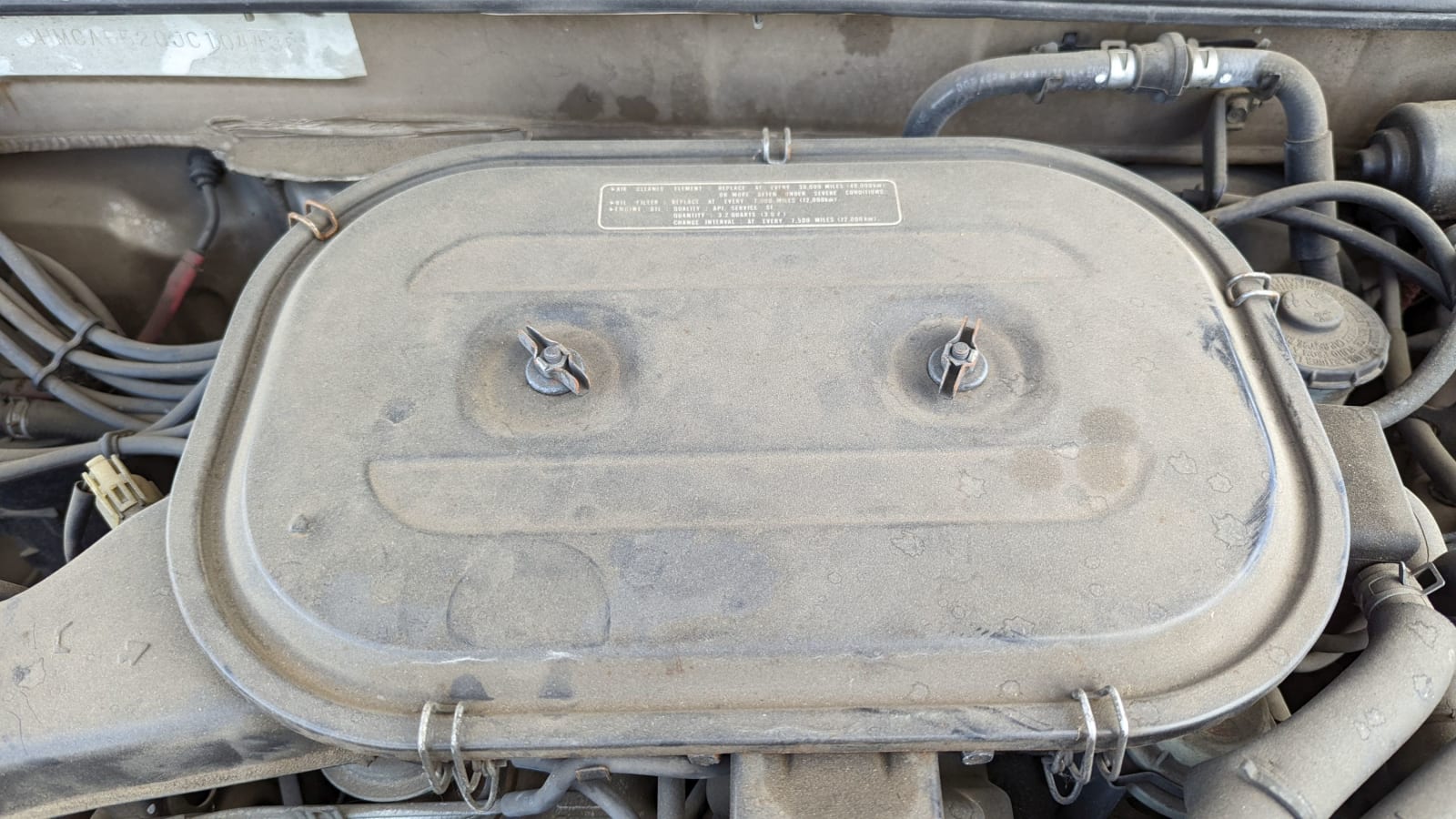 The LXi was the only US-market ’88 Accord available with electronic fuel injection. This car has the dual-carburetor setup, which was pretty old-fashioned for the late 1980s but worked very well. 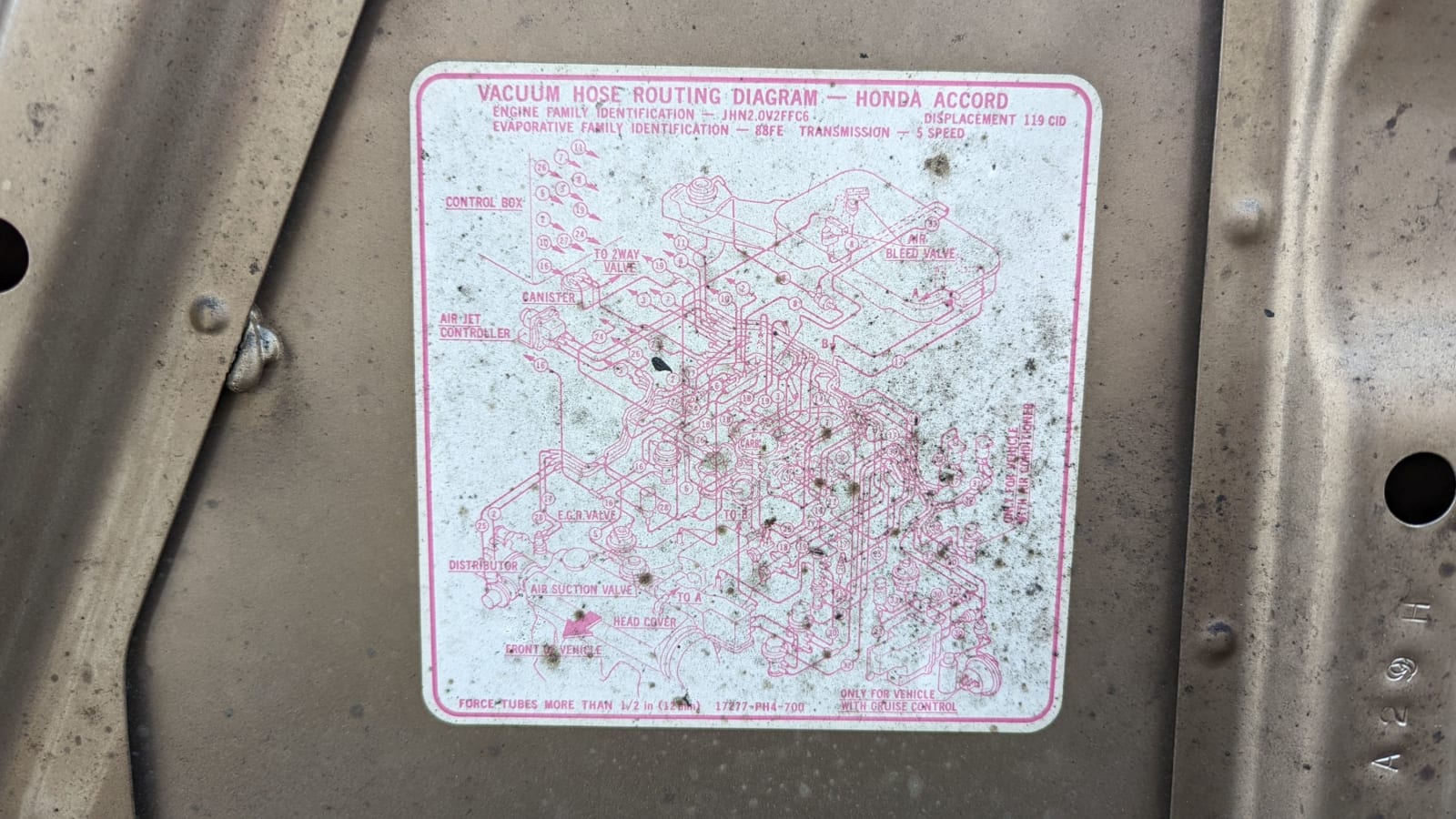 It had become very difficult to make carbureted cars meet emissions standards by the time this one was built. See all those vacuum lines, solenoids, and sensors on this diagram? If any one of them fails, you might not pass a smog check. Fortunately, this car doesn’t have the CVCC technology that went into carbureted Civics of the middle 1980s; those cars had a vacuum hose diagram so complex that it might as well have been a map of the Universe. 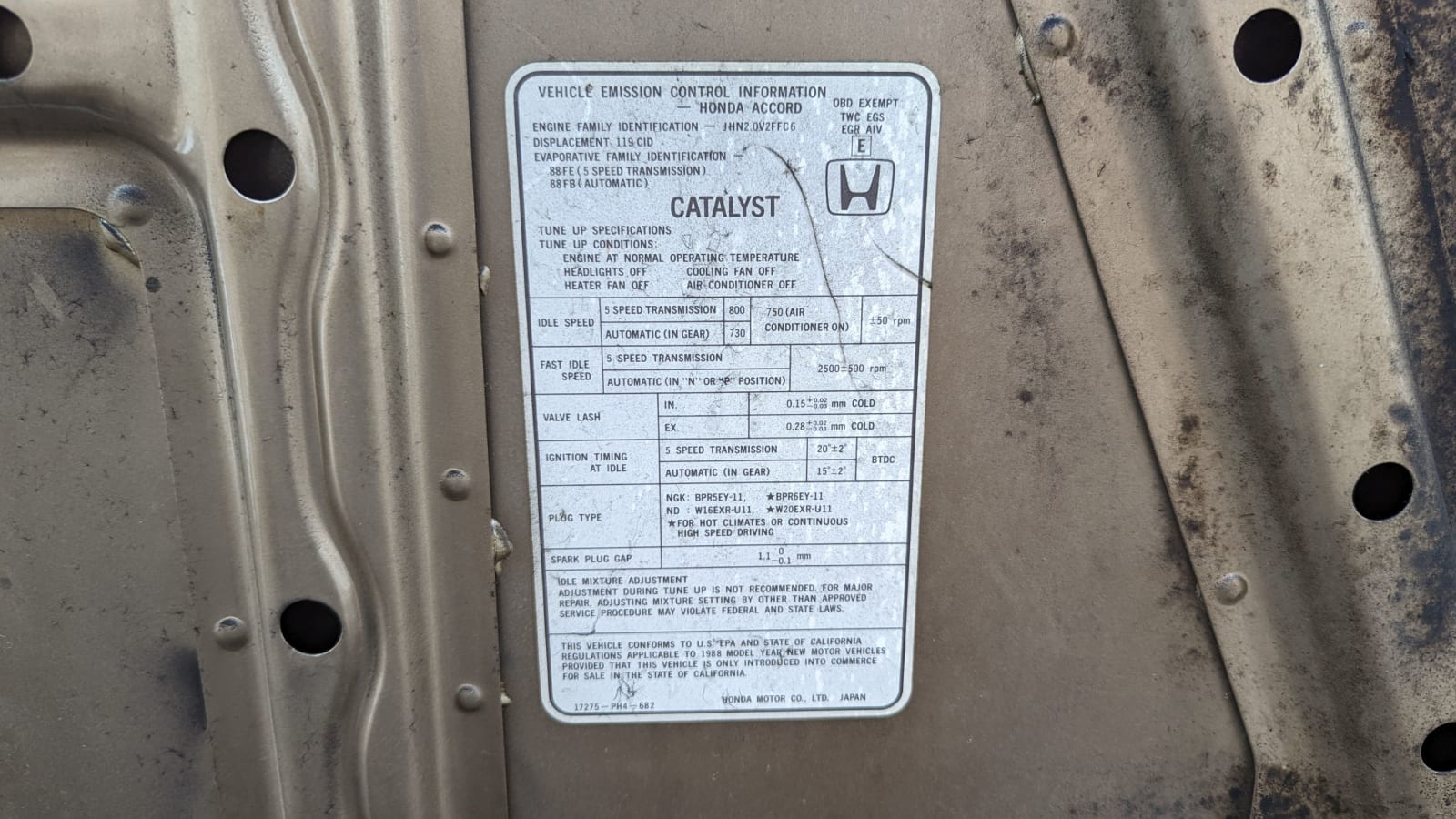 This car was built during the era when manufacturers built California-spec vehicles and “49-state” vehicles, with differing emissions hardware. We can see from the emissions sticker that this Accord began its driving career in California, then migrated to Colorado later on. Actually, it could have lived in all fifty states during its life, given the odometer reading. 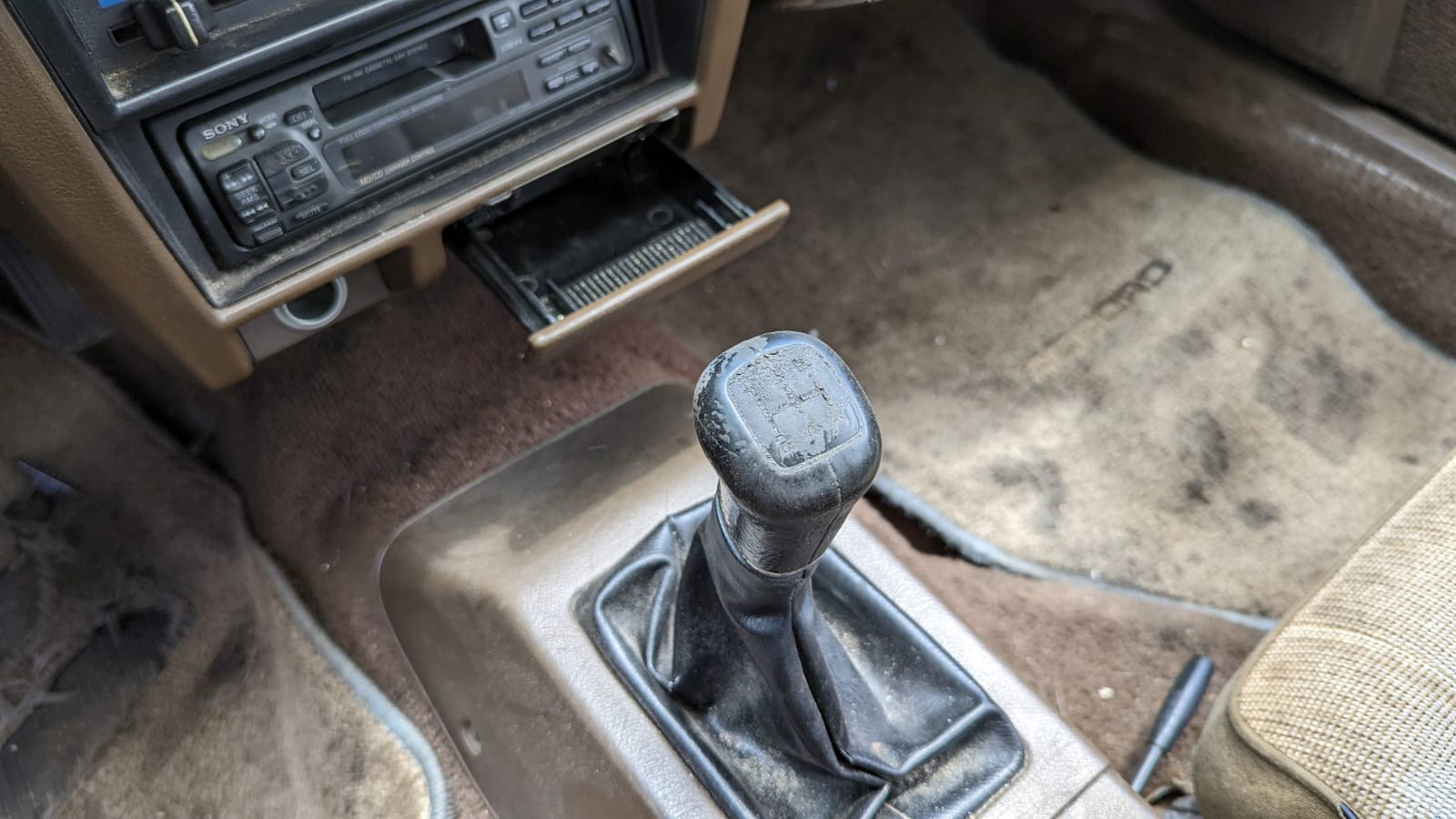 Honda had only graduated from the two-speed Hondamatic to real automatic transmissions a few years before this car was built, but the original buyer of this car wanted nothing to do with the (relatively) unreliable and inefficient slushboxes of the era. How many clutch replacements do you suppose this car has had? I’ve seen Hondas with 250,000 miles on the original clutch, so perhaps this car is on just its second clutch assembly. 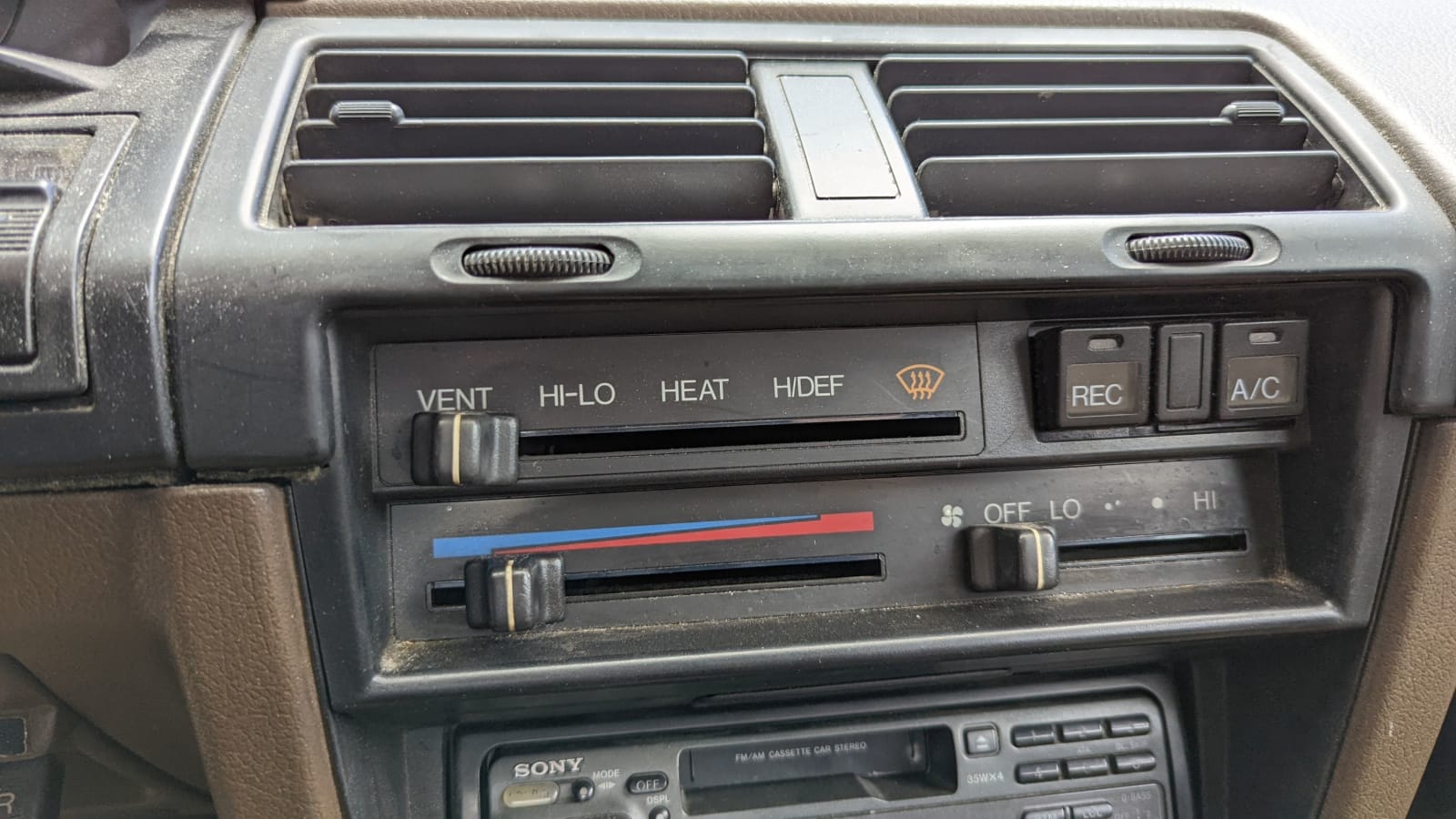 That original owner skipped frivolous extras such as an automatic or power windows, but did get the optional air conditioning. 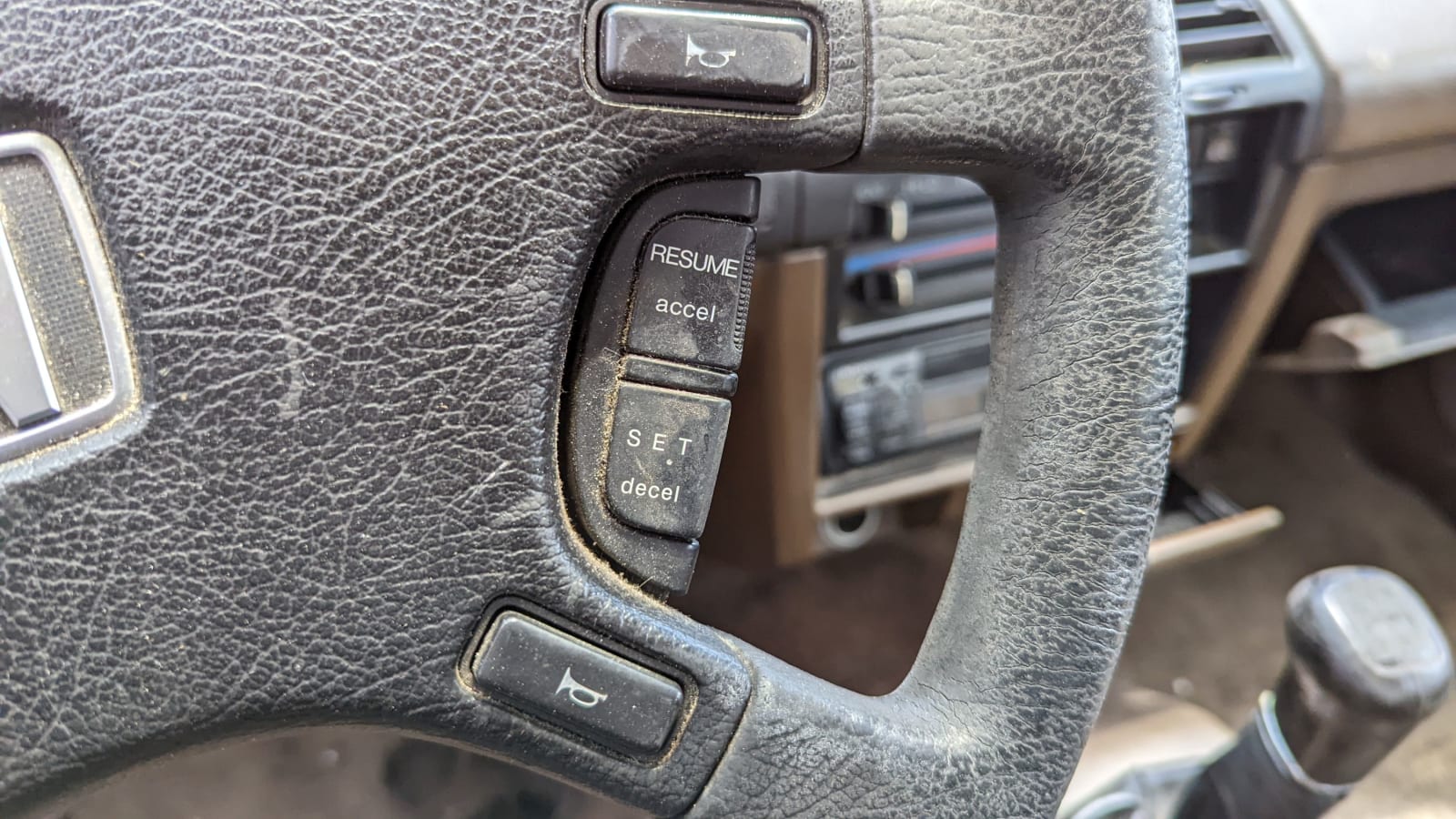 Cruise control would have been a real plus for a car that put in the kind of highway miles this one did during its life. 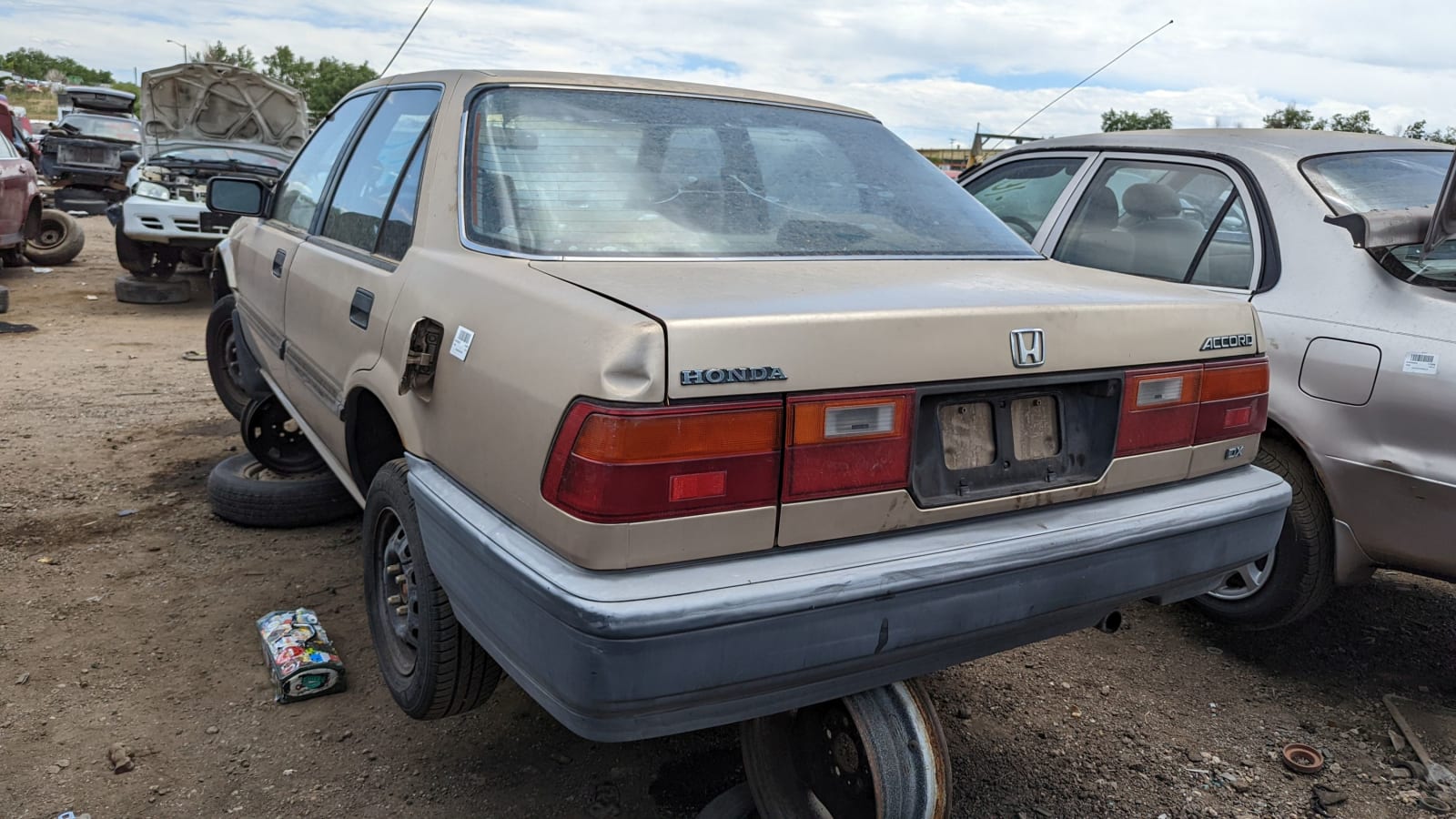 Honda began building cars in Ohio starting in 1982, with the millionth Marysville Honda coming off the line in 1988, but this Accord was born in Saitama Prefecture, Japan. 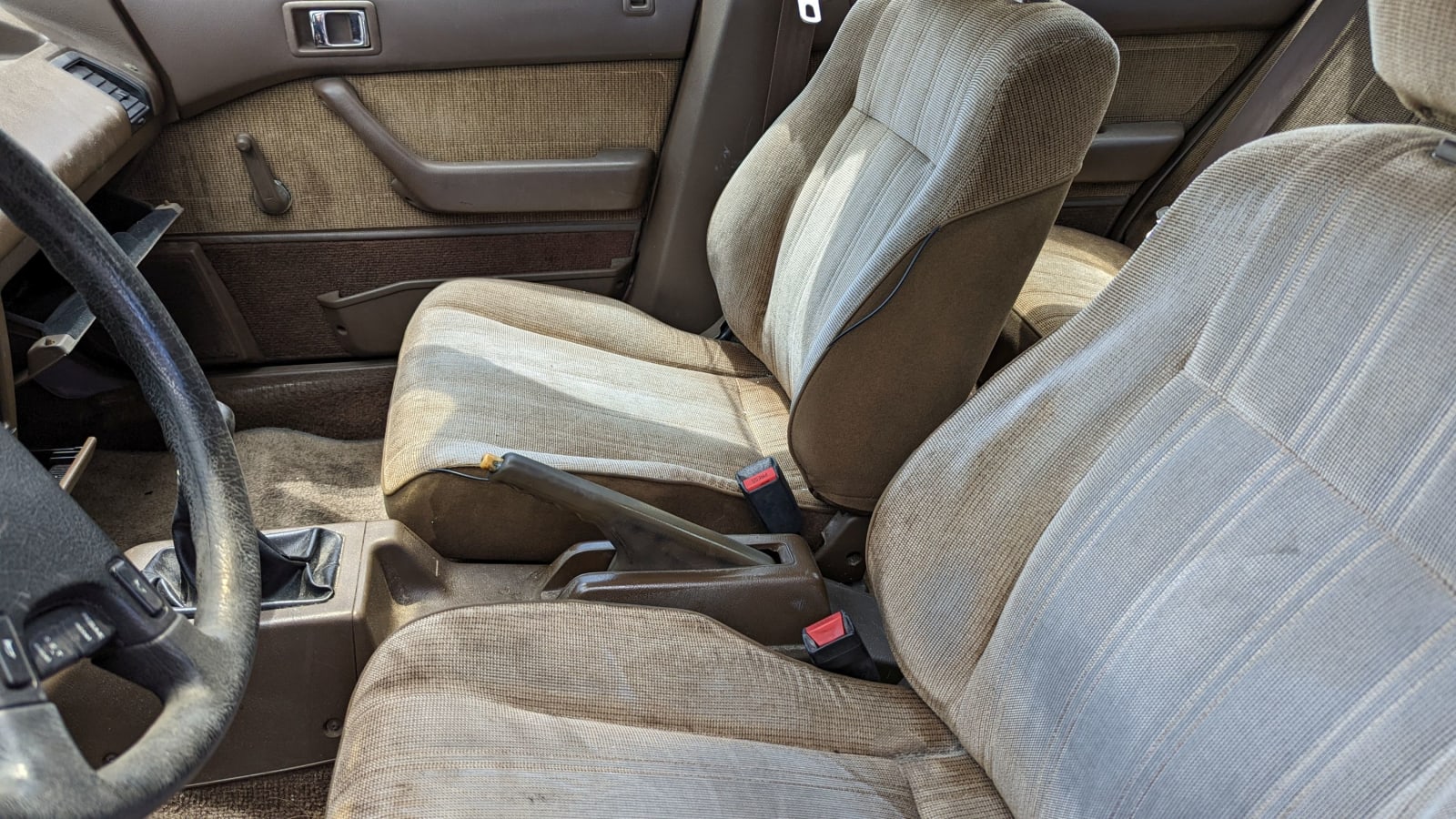 Why did it end up in a place like this? My guess is that the owner traded it in for a new car— almost certainly another Accord— and the dealership couldn’t find any takers for an old sedan with an undesirable number of pedals and ludicrously high miles. I’ll bet it would run right now with the addition of fresh gasoline and a battery.

Some of the most important moving parts in the Honda Accord sedan weren’t designed by Honda engineers.