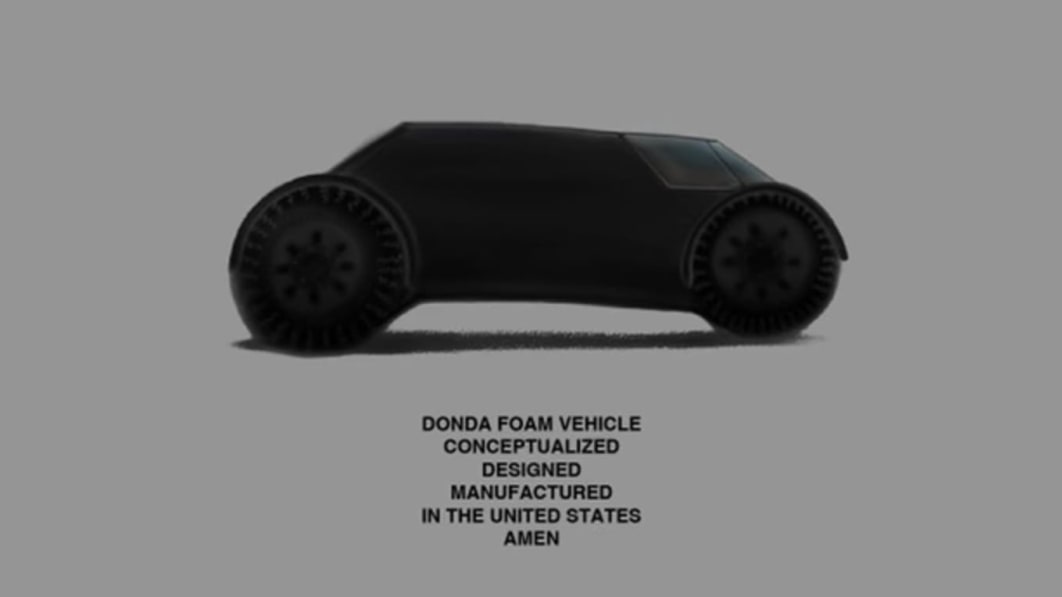 Kanye West is no stranger to odd vehicles, he once used a fleet of Russian-built Sherp SUVs to distribute free sneakers to kids around Chicago, and his eccentric taste is seemingly pushing him towards the car industry. Donda, a company that he founded and runs, released a mysterious sketch of a concept car named the Donda Foam Vehicle that looks like nothing we’ve ever seen outside of the Hot Wheels aisle.

The photo explains that the Donda Foam Vehicle was “conceptualized, designed, and manufactured in the United States,” ending the statement with “Amen.” Nothing suggests that it has been manufactured, however. It shows the profile of a car that’s difficult to classify, to put it lightly. There’s what looks like a wrap-around front windshield, a boxy body without windows, huge front wheels, even bigger-looking rear wheels, and airless tires. Presumably made of foam, the Foam Vehicle sits relatively high off the ground; it almost looks like a cross between a dune buggy and some kind of armored military vehicle. We don’t know yet what — if anything — it’s powered by or what the interior looks like.

As is often the case, the image asks more questions than it answers. An interesting detail reported by GQ is that West hired designer and long-time collaborator Steven Smith to lead Donda’s new Industrial Design division. Smith has worked as a designer for a long list of shoe companies, including Adidas and Nike, but a quick glance at his Instagram account reveals he has more than a passing interest in cars. He notably races an air-cooled Volkswagen Beetle that has appeared in Forza Motorsport. He could spearhead West’s entry into the car world.

So, are we about to have a toast to a new, Kanye West-backed car company? Will drivers bite, or will they run away as fast as they can? Time will tell, but keep in mind that unexpected tie-ups are becoming increasingly common in the automotive industry. Sony announced plans to build cars with Honda earlier in 2022, and rapper will.i.am teamed up with Mercedes-AMG to design a concept named will.i.AMG.