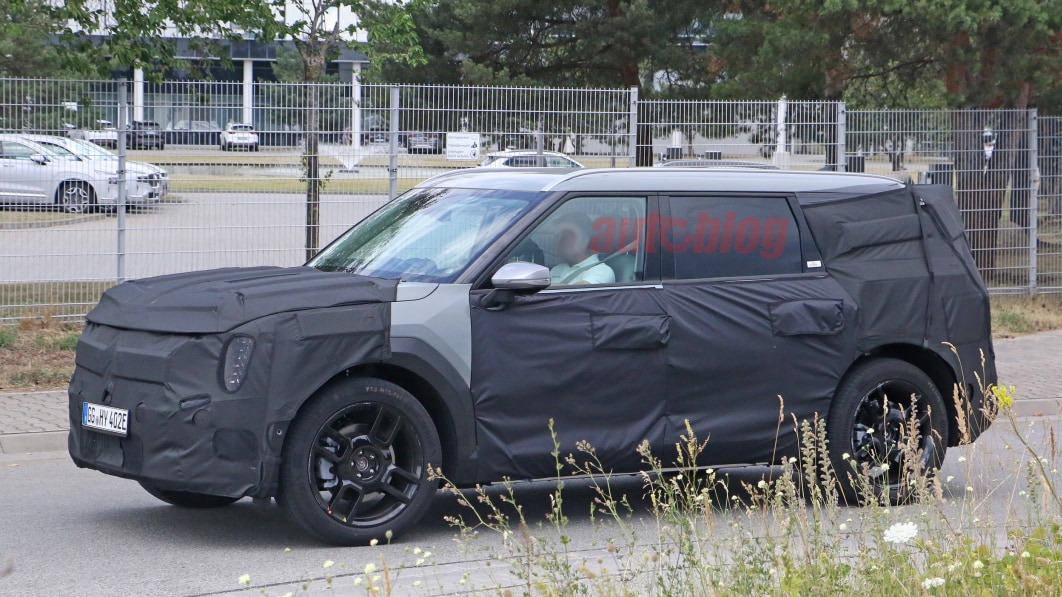 We were impressed by the Kia EV9 concept when it debuted last November at the Los Angeles Auto Show. (Shown below.) The concept was a couple of inches shorter than a Telluride, but a couple of inches wider, too. Best of all, the boxy, cyberpunk-ish electric SUV  didn’t look like the stream-worn pebbles that so many electric crossovers are seemingly inspired by. It had presence, and was one of the highlights of the show.

When we asked about a release window, it seemed that Europe would get it a bit sooner than the U.S., so it makes sense that we’re now seeing spy shots of test vehicles on the streets of Germany.

The good news is, the production EV9 looks quite faithful to the show-stopping concept. We can see that details such as the columns of vertical LEDs in front and angled taillights have made it to the prototype. The boxy profile remains, but it appears to ride just a little bit closer to the ground than the concept. Sadly, the chunky and funky three-spoke wheels have given way to four-spokes that aren’t quite as bold.

Details which have carried over include the kink in the C-pillar and the prism-like/ sheetmetal behind the front wheels hinting at the angle-cut fender flares. However, everything is just a bit toned down. The roofline, fenders, and wheel well cladding are a bit rounder and lack some of the crispness of the concept. And of course, concessions like door handles, thick B-pillars, and a rear door that’s no longer rear-hinged all kind of take away from the impact of the show car.

The EV9 will be built on Hyundai’s E-GMP platform shared with cars like the EV6, implying a 350-kW DC fast charging system. The concept was estimated to have about 300 miles in range. A dual-motor, AWD variant seems very likely as well. The Kia EV9 will make its debut in the second half of 2023.