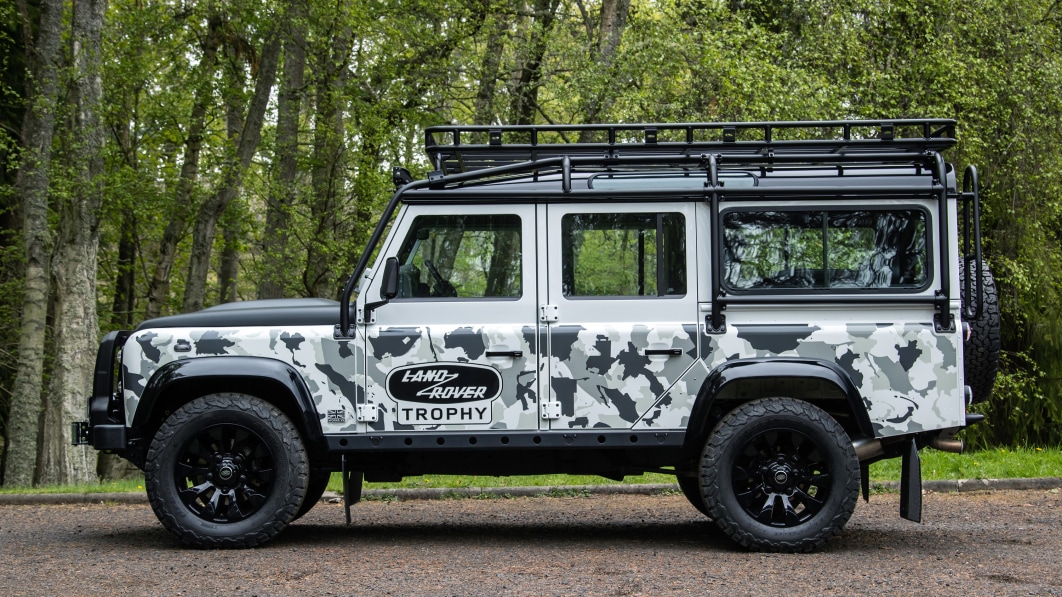 In February last year, Land Rover produced 25 tributes to the classic Defender used in the Camel Trophy race. The exclusive run of vehicles was called the Defender Works V8 Trophy, and buyers were able to choose between the 90 and 110 body styles, with pricing starting at £195,000 ($237,000) for the short-wheelbase version. After purchase, owners were invited to attend a a three-day adventure at Eastnor Castle, tackling challenges to mimic the Camel Trophy on the grounds where Land Rover performs some of its research and development work. We guess the special editions proved successful, because the automaker is doing it again. The differences are name, available body styles, color scheme, and price.

The new run is called the Defender Works V8 Trophy II. Based on models sourced from the 2012 to 2016 model years, five will be available in double-cab pickup form, the remaining 20 split down the middle between 90s and 110s. They’re rebuilt with 5.0-liter V8s making 399 horsepower and 380 pound-feet of torque, shifting through a ZF eight-speed automatic. Improved suspension and steering gear is fitted, as well as a Land Rover front bumper with bull bar and winch, LED light bar, expedition roof rack and ladder, rock sliders, rear recovery point, mud flaps, and an external roll bar.

Inside, the cabin refit includes two-tone Recaros and plenty of leather throughout, plus a modern infotainment system. After the mechanical upfit, instead of the trademark drab yellow, these are done in Fuji White and Narvik Black camouflage with black roofs, satin black hoods, and 18-inch gloss black Sawtooth wheels. The camo pattern swims with Easter eggs honoring 23 international locations Land Rovers have gone on expedition and Land Rover vehicle silhouettes. As on the previous version, an Elliot Brown clock sits in the dash, its face mirroring the paint job. Unlike on the last version, Elliot Brown will sell 1,000 limited edition watches with the same camo-print face.

The price has run up to £225,000 ($273,000 U.S.) for the least expensive Defender 90 model. Owners will again be invited on a three-day Land Rover Trophy adventure where expert off-road guide drivers through challenges “inspired by famous global adventures.” For those who miss out on the historic glamping, Land Rover says it will “be offering Trophy influenced Genuine Accessories to be announced later in 2022” likely engineered to fit the modern Defender.