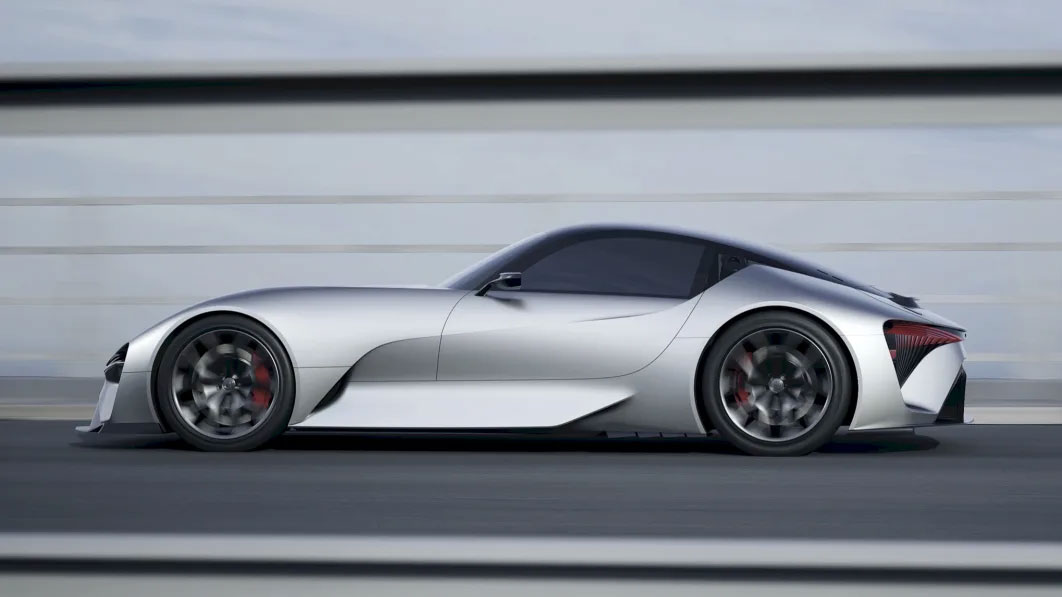 We are thought to be three years away from the successor of the Lexus LFA arriving in showrooms. We are thought to be less than a month from the debut of a pre-production version of Lexus‘ coming supercar, which could take place at next month’s Monterey Car Week. Persistent reports say Lexus is preparing two versions, one with a hybridized twin-turbo V8, one with a battery-electric powertrain; the former is thought to be the one on show in California in August, the latter not ready for primetime until around 2030. One of the many questions has been, “Where is that V8 coming from?” CarBuzz had its feelers out in Japan, picking up a report from Japan’s Mag-X (translated) that Lexus will use the 5.0-liter TTV8 in the LC500 endurance racer for the super coupe being referred to as LFA II.

This particular engine has been a specter, rumored for ages to make production but never seen. Way back in 2014, rumors that were already a year old posited a trio of engine options for the coupe still known as the LF-LC concept. Paramount among the powerplants was a twin-turbo 5.0-liter V8 with around 600 horsepower. The scuttlebutt continued even after the LC launched in 2016, we saw no truth of it on the street. Even when Lexus launched an endurance racing program with the LC500 in 2018, no one knew what was under the hood. It wasn’t until a year later that the brand officially announced the TTV8 engine with a release that included one aim being “to complete the [Nürburgring 24-hour] race without any trouble by adopting a variety of new technologies, including a newly-developed V8 twin-turbo engine destined for use on future road cars such as sports cars.”

At the time, almost everyone expected the “sports cars” reference to indicate the coming of an LC F.  That could still be the case. But Mag-X says the racing engine will be used in the LFA II. The LC500 is still in competition, finishing 49th out of 94 finishers at last month’s four-hour race at the Nurburgring, Mag-X noted that Gazoo Racing put out another release indicating the race car would be “probably introducing [components] to utilize in future commercial vehicles, focusing on high rigidity, aerodynamic development, suspension technology.” The outlet didn’t say much else about the engine in its online post, but noted it “found the contents of the LC were ridiculously promising.”

It also said the LFA II will “be put on the market as a substitute for the GR010 Road Going version.” The Gazoo Racing GR010 is Toyota’s entry in the Hypercar class of the FIA World Endurance Championship, powered by a twin-turbo 3.5-liter V6 hybrid system. rated at an unrestricted 938 horsepower, though race regulations cap its total output at 670 horses. At the moment, Hypercar class rules mandate that participants sell at least 20 road-going versions of their entries within a two-year period, so we’re not sure how the LFA II supplants the GR010 with a different engine.

As for that on-again-off-again LC F, in April of this year Lexus Racing USA teased a shaded LC in front of the brand’s blue F logo with the caption, “Highest expression of performance.” Leaked Toyota product plans from 2020 indicated this is the year for the model’s appearance. We know Lexus likes to show off in Monterey, we could be in for two surprises next month.