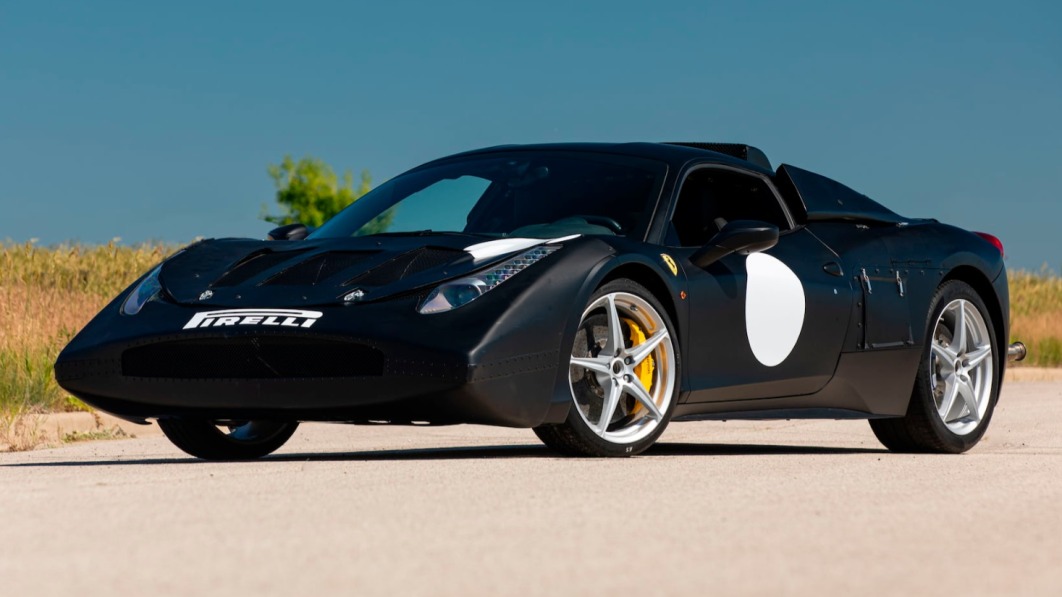 The life of a test mule is short and hard. Pre-production prototypes normally get tortured on and off the track, sent to some of the planet’s most inhospitable regions, then crushed. Four Ferrari prototypes have miraculously escaped this fate, and they’re headed to auction.

Called M4, MP1, and PS1, respectively, three of the test mules were used to develop the LaFerrari. Ferrari built the M4 on a 458 Italia platform to test emissions equipment. The coupe features an unusually-shaped composite front end that’s removable, a modified aluminum chassis, and a complete LaFerrari drivetrain, according to Mecum Auctions. The camouflage and the oddly-shaped exhaust tips hint at the M4’s experimental nature, and that’s just the tip of the iceberg. Some panels are removable to let engineers access the hybrid system parts.

Getting the drivetrain to pass emissions must have been a Herculean task: The M4’s odometer shows 192,264 kilometers, which represents about 119,500 miles. We’d be surprised if there’s a LaFerrari with more than 100,000 miles on the clock anywhere in the world.

MP1 looks more like the LaFerrari because it’s a second-phase prototype built on a pre-production chassis, though Mecum points out that the coupe wears a one-off body to avoid revealing the production car’s lines. It’s powered by a V12 engine linked to a version of the HY-KERS system fitted to the LaFerrari when it made its debut in 2013. Ferrari reportedly used MP1 to develop and fine-tune the drivetrain.

PS1 is a third-phase prototype that’s nearly identical to the regular-production LaFerrari; Ferrari made no efforts to hide the final design here. The test mule is finished in red and black, and it’s powered by the definitive version of the gasoline-electric drivetrain designed for the model.

Ferrari built the fourth prototype while developing the F12tdf. Called MP4, it looks a lot like its regular-production offshoot, but a closer examination reveals that the hood is a standard F12 unit with a central air vent. There’s no word on which version of the V12 powers this car.

What’s at least as interesting as the prototypes themselves is how they ended up in private hands. Most test mules get destroyed after the end of their useful life. Some survive, but they’re generally stashed in a carmaker’s warehouse and rarely shown in public. Nothing suggests Ferrari is selling these four cars, so it’s reasonable to assume that they’re in private hands. Mecum offers a relatively vague explanation: It notes that “a handful” of prototypes from the LaFerrari’s development process were offered to “Ferrari’s most faithful followers.”

Mecum will auction off the four prototypes during a sale taking place in Monterey, California, on Saturday, August 20. It didn’t provide a pre-auction estimate, but we’re guessing that collectors will happily open their wallet for the unspeakably rare chance to own a Ferrari test mule.