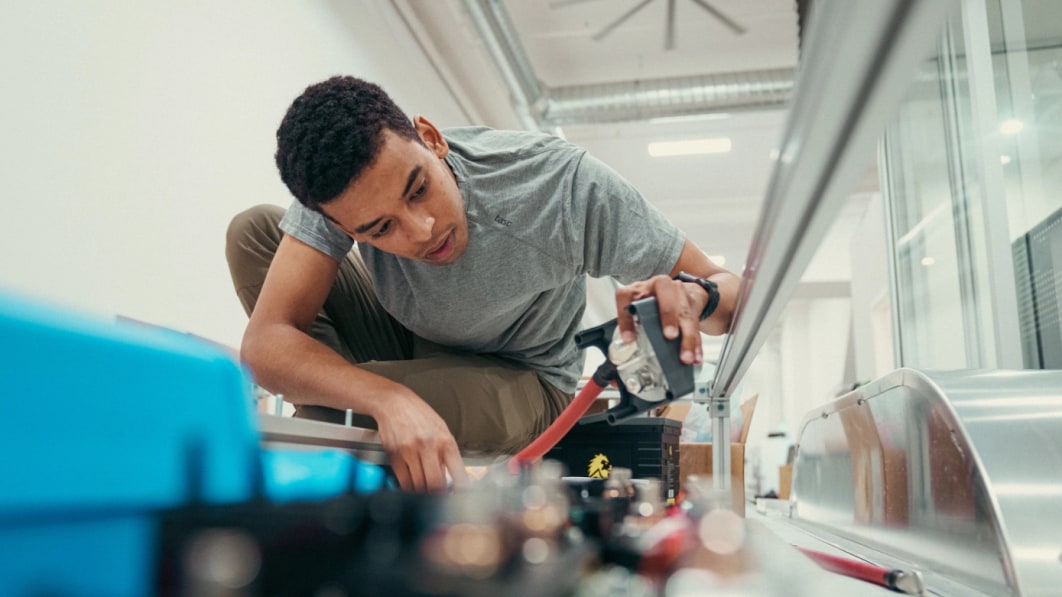 What started as a pet project to electrify food trucks in the San Francisco Bay area — an enterprise inspired by the cacophony of generators that greeted Ben Parker every day during his lunch break at Tesla — has evolved into a much larger, complex and potentially more lucrative undertaking.

Parker and partner Toby Kraus have set their sights well beyond food trucks and are aiming instead to build an all-electric RV company that will upend the industry.

“Every time that I would tell people about the food truck project, RVs would come up in conversation because these (vehicles) have similar needs for onboard power,” said Parker, a Tesla veteran who worked on the battery for the Model 3.

He soon discovered that the RV market, and specifically the towable travel trailer sector, was much larger than he realized. It was also badly in need of a switch to electric. A three-month, 6,000-mile RV road trip designed to give Parker firsthand experience as well as an understanding of the customer and market provided the final proof points.

Lightship Energy, the startup the pair co-founded in May 2021, was soon charging forward with a high-flying goal.

Lightship is not only trying to design and produce an electric travel trailer that ditches the propane tanks and generators that creates a “bummer RV camping experience” as Parker describes it, the company is also trying to remove a barrier for owners of all-electric SUVs and trucks who want to haul a travel trailer on long road trips.

An EV truck with a 300-mile range traveling at 65 miles an hour with a traditional travel trailer in tow becomes a 100-mile truck, explained Parker, who is CEO. The team at Lightship, which now numbers 20 people, experienced the range loss first hand.

“We pulled the most aerodynamic trailer we could rent behind a Tesla Model X and we actually had to drop the trailer in the middle of an off ramp on an interstate because we couldn’t pull it to the next Supercharger,” said Kraus, who is chief operating officer at Lightship. “It was miserable.”

The effort promises to be complex, but the pair contend the market size and opportunity are simply too large to ignore.

In 2021, 600,240 recreational vehicles were sold in North America, up from 430,412 units the year before, according to Thor Industries, the RV giant that owns brands Airstream, CrossRoads, Cruiser RV, Dutchmen, Jayco, Keystone, Tiffin and Erwin Hymer Group.

“Ninety percent of the market is towable travel trailers,” Kraus said, who is an alum of Tesla and Proterra. “The market is huge.”

Lightship is still creeping out of stealth and not yet ready to show its electric travel trailer to the world. But the company’s idea and its progress has attracted investors and fresh capital.

Lightship, which previously raised $1 million in pre-seed and $3 million in seed funding, recently closed a $23 million Series A round led by Victoria Beasley of Prelude Ventures. Existing and new investors include Obvious Ventures, Congruent Ventures, My Climate Journey, HyperGuap and Alumni Ventures.

Beasley, who has also joined the board, said the combination of market opportunity, the team, which includes former Tesla, Proterra, Apple and Rivian employees, along with Lightship’s aim to create a delightful customer experience led her to invest in the startup.

The funds will be used to double the team by the end of the year and develop an alpha prototype of Lightship.

“Our goal is definitely to create a super satisfying long-range, EV roadtripping experience,” Parker said. “As any good Tesla alum would work, we started with going back to the fundamentals and asking, ‘what should a travel trailer be?'” The team identified that efficiency was an absolute necessity for it to exist in the future.

But the project extends beyond designing a sleek-looking, aerodynamic trailer. Lightship is also developing the underlying EV skateboard architecture.

The final ingredient to Lightship’s secret sauce is the powertrain, which includes a battery pack comparable to one in a Tesla Model 3, that will propel the trailer as it is being towed. Lightship is also exploring the integration of solar cells on the roof for passive charging.

“I think the gravity of the problem around towing and towing range is just starting to hit home with people as more EV trucks are hitting the market,” Parker said. “With an EV powertrain on board you can use that additional energy for the trailer to propel itself, reduce all of the load on the tow vehicle and get back to a range loss zero experience — now you have a 300-mile trailer and a 300-mile truck.”