The Cadillac CTS Wagon became a cult classic the second it went on sale. We all knew that it was never going to sell in anything approaching significant numbers, and if that “we” didn’t include those actually working at GM, one would have to wonder what they were smoking. Cadillac was still having a hard enough time trying to convince people that it was now a BMW-fighting sport luxury brand rather than the purveyor of Grandpa-piloted land yachts. To many, a sport sedan like the CTS seemed like a stretch. But a CTS sport wagon? It sure seemed like GM was just doing things for funzies, an impression only enhanced by the CTS-V Wagon. Forget cult classic. That thing was an instant legend.

And yet, the CTS wasn’t the only Cadillac of that era offered as a wagon. It wasn’t even the first. Before GM said “to hell with it, let’s have some fun” on this side of the pond, over in Europe, it had already taken a page from its old badge-engineering playbook to create the 2006 Cadillac BLS Wagon. It was available as a sedan, too, but its awkward majesty is best enjoyed as the long-roof model. 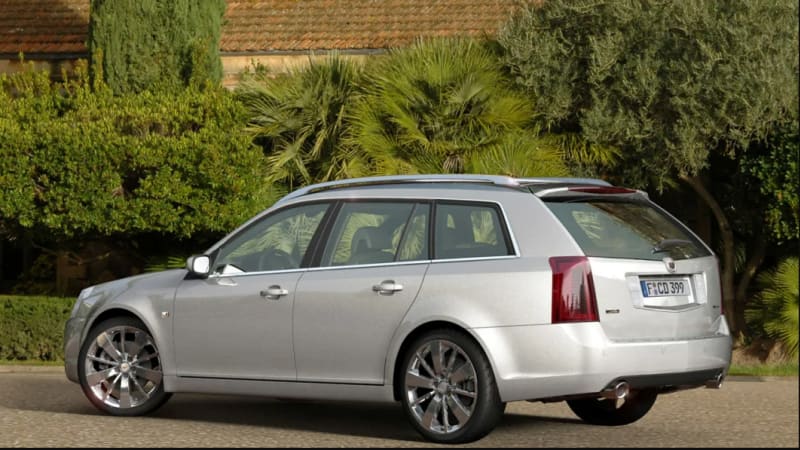 There’s just something off about the whole thing, right? That’s probably because it also looks vaguely familiar, as if you’ve seen it before. So where the hell does this thing come from? Sweden! Behind that Cadillac Art and Science face is a Saab 9-3, and in the case of the BLS Wagon, the Saab 9-3 Sport Combi wagon. The roofline is the dead giveaway, as no other wagon has ever looked like that. In fact, the roof and windows were the only exterior elements to copy directly over from 9-3 to BLS. No kidding. With the Cadillac front end, doesn’t the Saab-funky-boxiness make it look like a miniature hearse? The answer is yes.

GM’s design team, led by Ed Welburn, was quite pleased with his work. Perhaps it even egged him on to create a real Cadillac sport wagon?

“The whole team was very excited to apply Cadillac’s design language to a wagon for the first time,” said Welburn in a press release from the time. “The V-shaped chrome-plated grille, a Cadillac hallmark, is picked up again by the shape of the rear window, and the body side character lines make it unmistakably a Cadillac.” 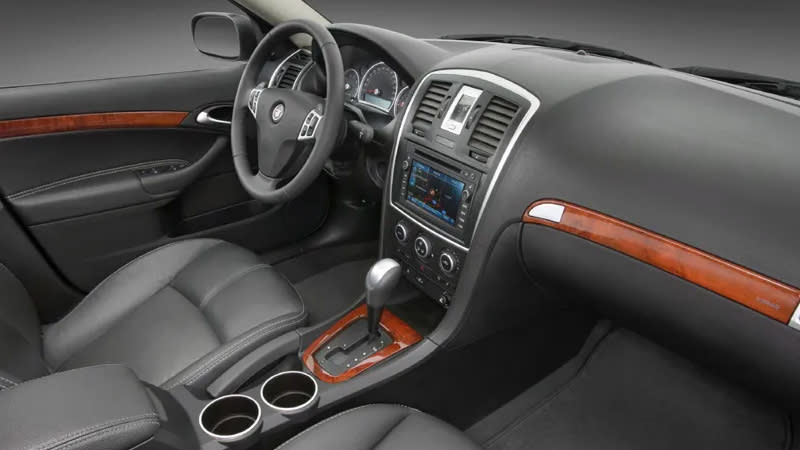 The interior is surprisingly different from the 9-3, including the ignition switch migrating from the center console up to the steering column. It also wasn’t exactly in keeping with the Cadillac norm of the time. That norm was in transition, though, as the new and greatly improved CTS of aforementioned wagon fame had yet to be introduced. The BLS cabin is more elegant than the aging contemporary CTS, which had a dash that resembled a desktop computer tower. Come to think of it, that car basically had Saab air vents. The BLS does not. It does, however, like the 9-3 and virtually every other non-Cadillac at the time, have the standard GM radio faceplate. It looked horrible, the buttons were chintzy, but for the time, it worked quite well. You could also get the less-prevalent touchscreen navigation version, pictured above. EVO magazine in the U.K. described it all as a “first-rate interior.” Who am I to argue?

In terms of its wagonness, this is what the press release at the time had to say: “Flexibility and versatility define the rear seats and cargo area, which are designed to support a wide variety of luxury and leisure interests.” So, art gallery openings and snowshoeing. Got it. As I recall from the 9-3, the back seat was awfully cramped even for the time, but that big, boxy roofline meant the cargo area was comparatively vast.

EVO also noted in its first drive that Cadillac did make mechanical adjustments from the 9-3. True, that car was based on the Opel/Vauxhall Vectra (aka Epsilon I), but so much was done in Trollhatten to polish that tu … vehicle … that it’s best to just say the BLS is based on the 9-3. EVO notes that “Cadillac has devoted a lot of development hours to quietening down the basic Saab package, especially at the back of the car. The BLS uses softer suspension settings than the 9-3.”

I only drove the sportiest of sport 9-3s, the rather charming 9-3X Sport Combi, and that was a surprisingly taut and satisfying car to drive. I actually liked it quite a bit. What would happened if you softened the softer version? Well, Evo noted that it was pleasingly quiet, refined and quite good at eating up “motorway” miles, but didn’t do the rest of the underwhelming dynamic package any favors.

“Your desire to chuck the Caddy down an inviting road is further eroded by woolly steering, fluffy brakes, front-wheel-drive tug and wriggle during hard acceleration, and a degree of bodyroll endemic to any car that places its dynamic emphasis on ride quality. And unlike other, larger Cadillacs, there are no plans as yet to develop a sports chassis pack for the BLS.” 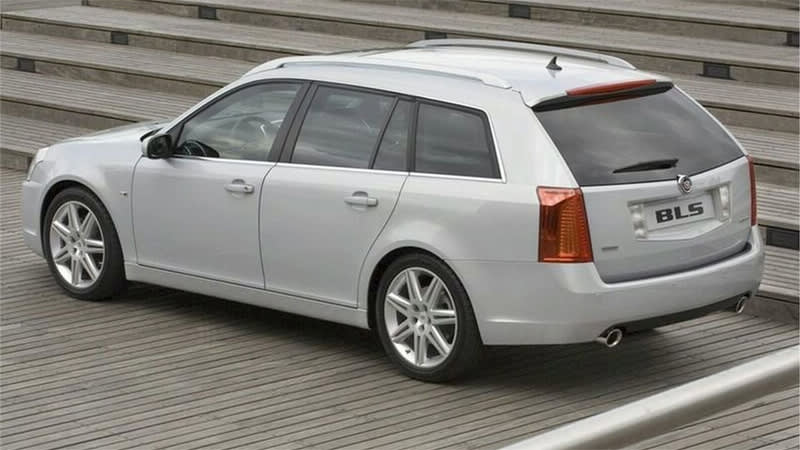 Saab’s 2.8-liter turbocharged V6 was available, which produced a very healthy 251 horsepower and 258 pound-feet of torque. An Audi A4 2.0T wouldn’t crest that horsepower for years. The 0-60 time was nevertheless listed at a leisurely 7.5 seconds. You could also get a 1.9-liter diesel and 173-hp 2.0-liter turbo-four.

In a way, you can consider the BLS the predecessor of the ATS and therefore the CT4. Of course, you could also consider it the long-awaited successor to the Cimarron, a far more unfortunate example of badge engineering. The car was only sold from model years 2006 through 2009, and today, the only wagon I could find for sale in the U.K. has an asking price of about £5,000 with only 52,000 miles on it. Not bad. I mean, used cars in Britain are always crazy cheap by American standards, but if you’re looking for a surprisingly spacious wagon that’s somehow more oddball than a Saab 9-3 Sport Combi … well, you’re quite the strawman, that’s for sure.

And no, there was no BLS-V Wagon. Apparently, GM of Europe wasn’t as keen on doing things for funzies.