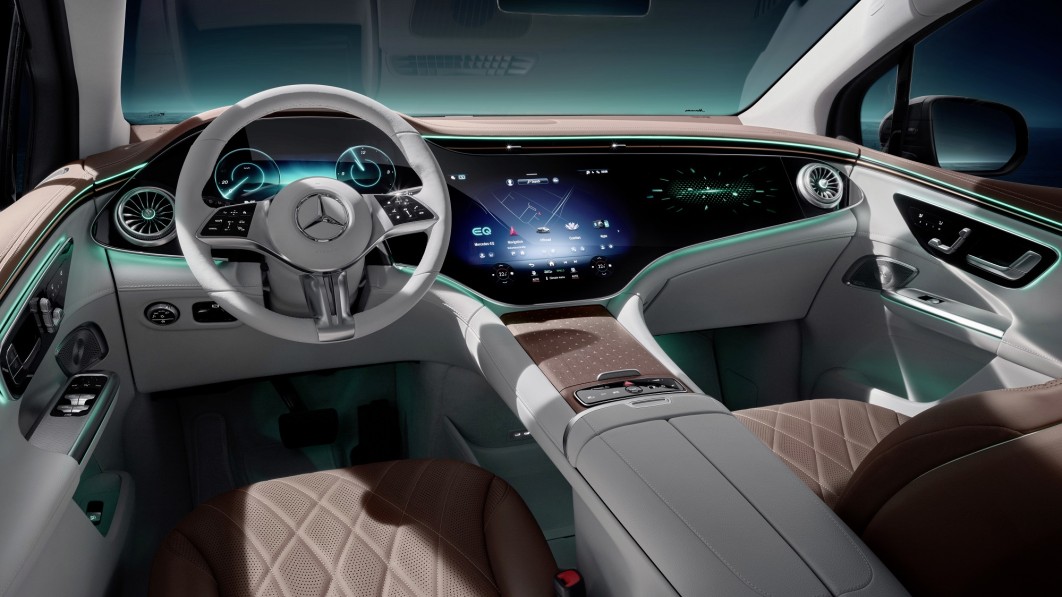 The Mercedes-Benz EQE SUV will make its debut before the end of 2022 as an electric crossover positioned as a more spacious alternative to the EQE sedan. While the model remains wrapped in camouflage, the Stuttgart-based firm published images to show off its interior.

If you’re experiencing déjà-vu, it’s likely because the EQE SUV’s dashboard looks almost exactly like the EQE sedan‘s, which is similar to the one you’ll find in the EQS sedan and in the EQS SUV. The driver faces a massive panel called Hyperscreen that incorporates a digital instrument cluster, the MBUX infotainment system’s touchscreen, and a third screen embedded into the dashboard in the front passenger’s line of sight. Mercedes-Benz notes that this setup will be found on the list of options, though pricing information hasn’t been announced yet.

American-spec models will come standard with two separate screens: a 12.3-inch instrument cluster and a 12.8-inch touchscreen for the infotainment system. Moving beyond the dashboard, the five-seater interior features a blend of trim materials including wood and aluminum, and buyers will have five color combinations to choose from. We’re told the EQE will be one of the most spacious models in its class.

Earlier spy shots suggest that the EQE SUV will borrow styling cues from the EQS SUV. It’s characterized by a smooth, rounded design, a black panel that occupies the space traditionally reserved for the grille, flush door handles, and thin lights likely connected by a light bar. Base models will likely come with a 288-horsepower rear-mounted motor and a 90.6-kilowatt-hour lithium-ion battery pack.

Mercedes-Benz will unveil the EQE SUV on October 16, 2022. Sales will start shortly after.