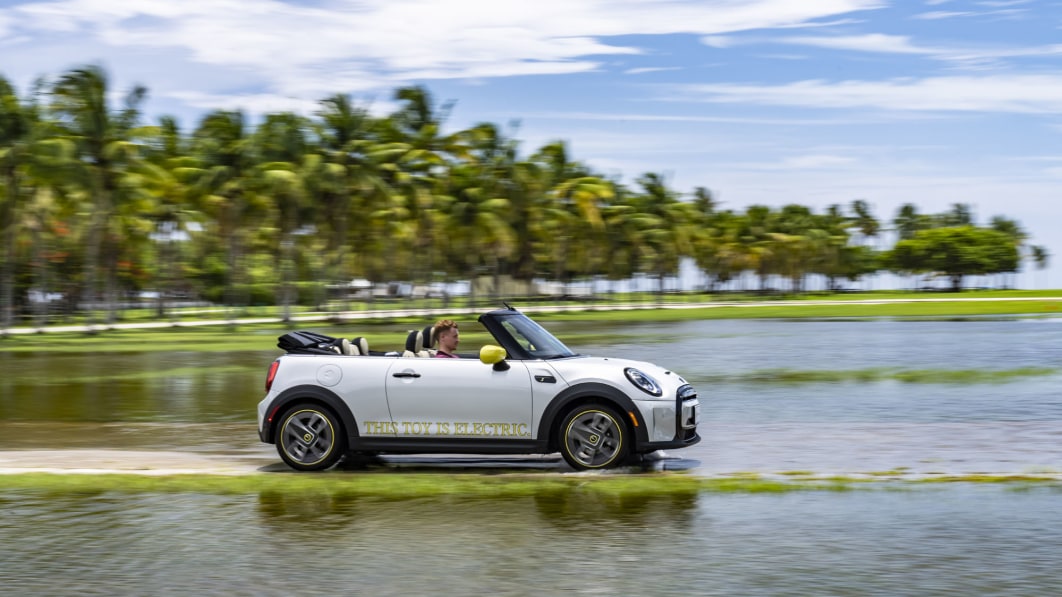 Mini rummaged through its parts bin to create a new concept called Cooper SE Convertible. As its name implies, the electric ragtop was built by dropping the Cooper SE hatchback’s battery-powered drivetrain into the body of a gasoline-powered Cooper S Convertible.

Visually, the Cooper SE Convertible stands out from its gasoline-powered sibling by adopting some of the Cooper SE‘s defining styling cues. It wears a plastic panel instead of a grille, an array of powertrain-specific emblems, yellow accents, and 17-inch Power Spoke wheels. Mini also added a handful of “THIS TOY IS ELECTRIC” decals, and it kept the power-operated soft top that opens or closes in 18 seconds.

Power comes from the Cooper SE’s electric drivetrain, which consists of an electric motor that draws electricity from a 28.9-kilowatt-hour lithium-ion battery pack to zap the front wheels with 181 horsepower and 199 pound-feet of torque. The hatchback’s maximum driving range checks in at about 110 miles, which is hardly a stellar number, and we don’t know what effect chopping off the top has on that figure.

Mini stresses that the Cooper SE Convertible is not a production model. We’re not surprised: the current-generation Hardtop is at the end of its life cycle and its successor should make its debut in the not-too-distant future. However, the concept suggests (though nothing is official yet) that the next-generation Convertible will be offered with an electric powertrain. And while drop-top sales are dropping around the world, but Mini said in 2021 that it won’t leave the segment. The next Mini Convertible is tentatively scheduled to make its debut in 2025.