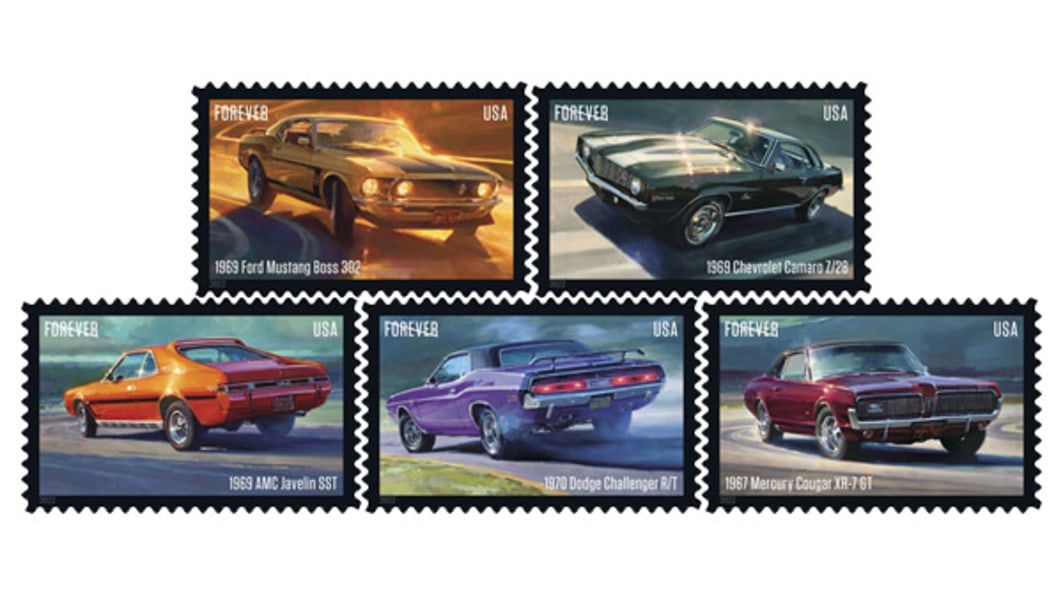 Some of America’s most iconic cars are about to be immortalized on postage stamps. A new set by the U.S. Postal Service will celebrate the the golden era of pony cars, featuring five classic examples of Detroit iron. Each one is beautifully illustrated in oil-on-canvas style, with subjects in motion and sunlight glinting off the chrome, and would add a nice touch to any first-class letter.

The pony car segment was all about (relatively) small, sporty alternatives to the full-size land yachts of the 1960s. They typically came equipped with 6-cylinder engines or small-block V8s. The category was named after the Ford Mustang, hence  the name. Some, though, argue that the Plymouth Barracuda, which was launched a couple of weeks before the Mustang, is the first. Luckily, the Falcon-based Mustang’s distinct styling generated a sales sensation, or we might be calling them fish cars.

Appropriately, one of the featured cars is a Mustang. But it’s not just any Mustang. The 1969 Boss 302, seen here resplendent in Bright Yellow, was created for the hotly-contested SCCA Trans-Am racing series. One of its main rivals would have been the 1969 Chevy Camaro Z/28, also created specifically for the series, and is included in the set in Fathom Green.

Representing Auburn Hills in the set is a 1970 Dodge Challenger R/T in Plum Crazy, while Southfield’s American Motors gets a nod with an AMC Javelin in Big Bad Orange. The Mustang’s platform cousin, a 1967 Mercury Cougar XR-7, is portrayed in a gorgeous Burgundy Poly that almost looks incomplete without Neko Case on the hood.

It’s not the first time the USPS has honored America’s rich car culture on its stamps. In 2013, it issues a series of muscle car stamps with the help of Richard Petty. That set featured a 1966 Pontiac GTO, 1967 Shelby GT-500, 1970 Chevelle SS, 1970 Plymouth Hemi ’Cuda and, of course, a 1969 Dodge Charger Daytona. Another set in 2016 featured classic pickup trucks. Going further back, a 2008 release had chroed and finned automobiles of the 1950s and a 2005 release featured sporty American cars of the same era.

The pony car stamps will debut on August 25 at the Great American Stamp Show in Sacramento, California in partnership with the American Philatelic Society. The public is free to attend the dedication ceremony, but you must RSVP first.

After that, they will be available at local post offices and on line at the USPS store. The cost of a first-class postage stamp went up by 2 cents on July 10, meaning the pony cars will cost 60 cents each. But like the memories of the cars themselves, the stamps will last forever.