You’ll be forgiven for having a hard time keeping track of all the various versions of the Porsche 911. Telling them apart invariably requires reading what’s written below “Porsche” on the back (unless the owner has deleted it) or possessing nerd-level knowledge of Stuttgart’s finest. Expand the subject into the historical realm and your head will be left spinning as a never-ending parade of three-digit internal codes fill the discussion. Indeed, being a Porschephile is all about nuance, of precisely selecting the ideal, thinly sliced piece of rear-engined pie for your very specific tastes, needs and maybe budget (but probably not).

It is with that preamble that I introduce you to this Porsche 911 Turbo S Coupe with the Lightweight Package. The last bit is actually important, as it’s not like some package that adds heated seats and a Bose stereo. Nope, this $10,340 line item fundamentally changes the nature of the car. Basically, the thin 911 slice that is the new Turbo S Coupe gets Ginsued even more.

Sound deadening is removed along with the back seats. Lightweight full bucket seats that power-adjust for height, manual-adjust fore and aft, and don’t recline at all, are included along with lightweight noise-insulated glass. Two Turbo S options also join the tally: the adaptive PASM Sport Suspension that lowers the car an extra 10 mm and the Sport Exhaust system finished in silver. In total, you save 66 pounds.

Yeah, that doesn’t seem like a lot, does it? And you really have to ask yourself whether those savings (and, you know, the 10 large) is worth all the extra noise. Because it is loud in this 911, with booming road noise far beyond what was already a pretty loud car. Perhaps it better allows you to hear that turbo flat-six wail and rattle, and that Sport Exhaust to sing its soulful tune, but again, not to an extent that would make all that tire roar worth it when cruising on the highway. And should you prefer to not drive bolt upright, those fixed-back buckets might get old. They certainly don’t encourage graceful ingress and egress. 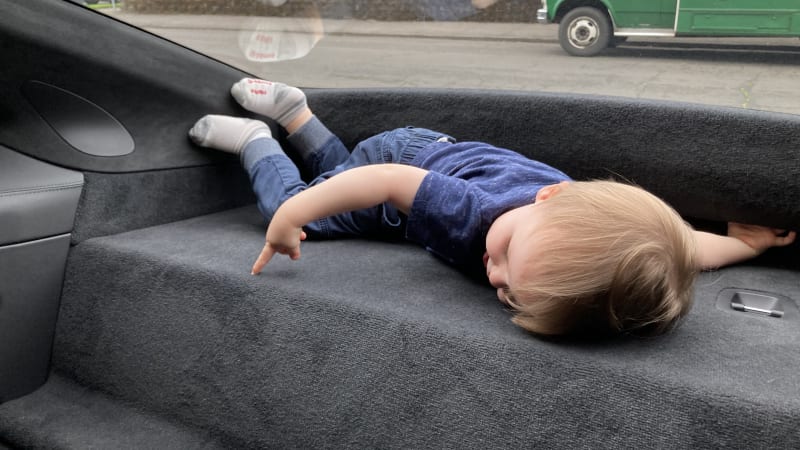 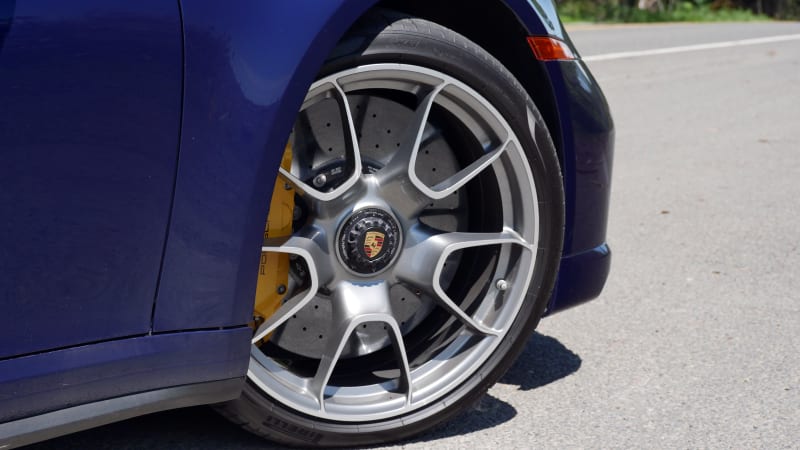 Back seat delete means the back of the 911 Coupe becomes a fun jungle gym in the driveway. This car also had the Turbo S-exclusive 20/21-inch wheels.

Of course, 66 pounds can make a difference on a track where back seats and sound deadening don’t mean a lick. This can therefore be considered the track configuration for the 911 Turbo S, which would otherwise be the fastest, most capable road-intended 911. Thing is, doesn’t the 911 GT3 exist for those with weekend motorsports aspirations? It too has the lowered ride, lighter weight and deleted back seats, yet goes even further with a unique double-wishbone front suspension design and ball joints in place of rubber suspension connections for superior agility and feedback. Besides excelling at a track, it’s a helluva weapon to attack tight, twisting mountain roads.

For $26,000 more, this 911 Turbo S with the Lightweight Package counters the GT3’s extra suspension wizardry and lightweighting with pure, unadulterated muscle. It’s laughably fast, with a 3.7-liter turbocharged flat-six good for 640 horsepower and 590 pound-feet of torque. That’s 60 more horses and 37 more torques than the outgoing generation (aka the 991.2, by the way), and thanks to the dauntless grip of all-wheel drive and the super-human shifting of the PDK gearbox, it blitzes from 0 to 60 mph in 2.6 seconds in the Coupe (0.2 quicker than before). Go ahead and let that amount of time sink in. Better yet, time yourself saying that last sentence out loud. It should take about 2.6 seconds.

The GT3 does the same sprint in 3.2 seconds, but also goes about its acceleration very differently due to its naturally aspirated 4.0-liter flat-six that produces 502 horsepower at a soaring 8,400 rpm. It makes noises that’ll melt your knees and even allow you to control it with a six-speed manual should you really want the feels. And for the purposes of this track conversation, being free of a turbocharger theoretically yields more immediate throttle response. Yet, you’ll also be doing without 244 pound-feet of torque, which is more than many cars possess in total. In short, in a straight line, the Turbo S will smoke a GT3. 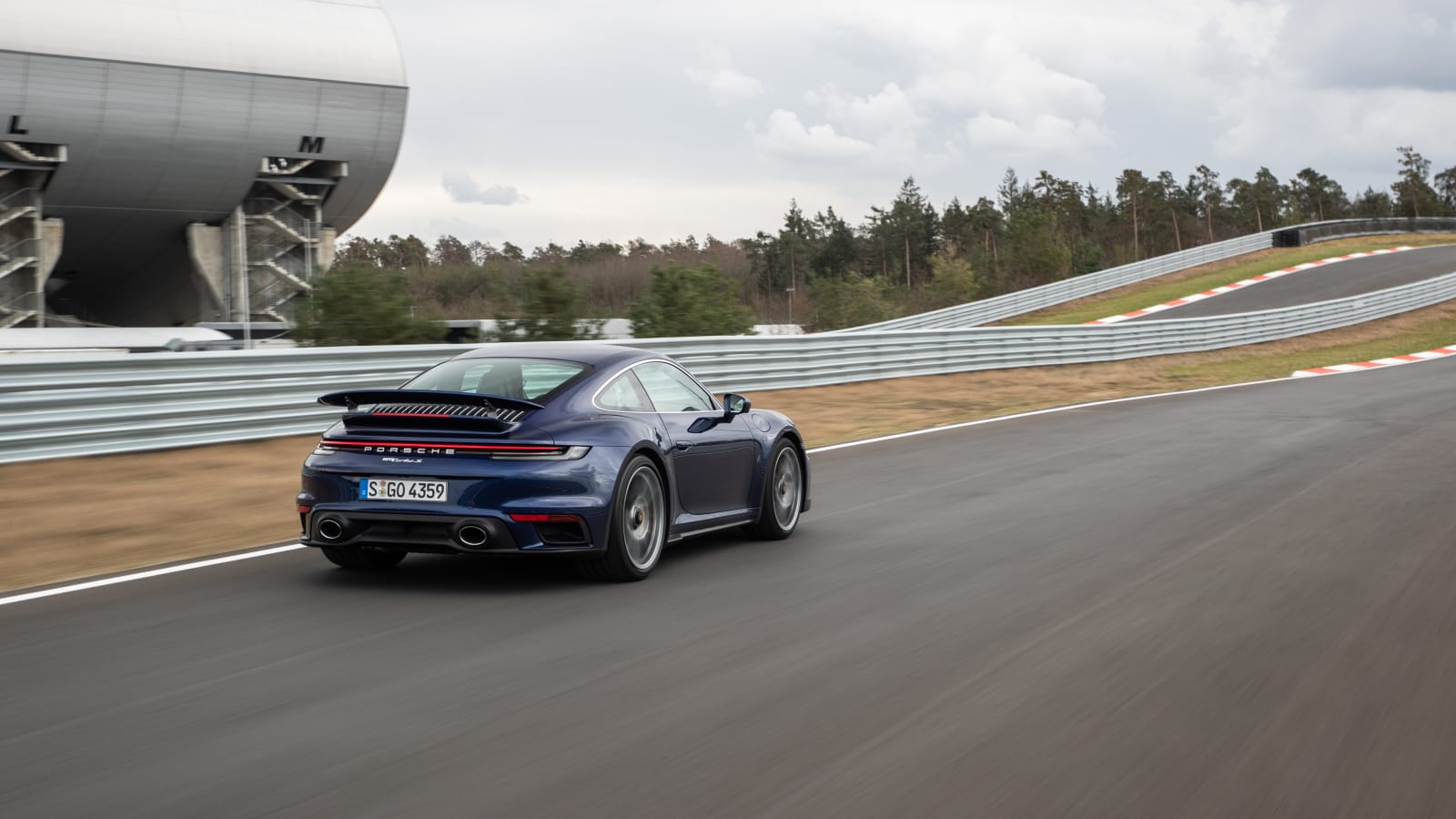 So, if your go-to track has longer, faster sweepers and extended straightaways to let’er rip, the Turbo S is the way to go. A tighter, technical circuit? GT3, be it the standard version or wing-less GT3 Touring.

And therein lies the point of this running pie slice metaphor: We’re down to choosing a 911 based upon the type of track you’re going to frequent rather than simply saying “yes” to “do you intend to take this to a track?” How’s that for nuance? Given the hefty bank accounts required to buy anything in the 911 family, it’s not out of the possibility that “choosing” could just mean “choosing from a row lined up in your palatial garage.” Go ahead and let that scenario sink in for a minute. No need to time it, just for fun. That garage sounds nice.

Anyway, once you stop obsessing over Weight Watchers slices of pie, you’re still left with a 911 Turbo S, which is not-surprisingly a breathtaking performance machine. Wooding the throttle will have your head rolling around that seatless rear compartment if it’s not screwed onto your neck tight enough. Acceleration is just absolutely vicious … but, only when you really call upon it. There’s a monster lurking back there, but it doesn’t draw constant attention to itself. One small twitch from your toe isn’t going to send you careering into a Dairy Queen. It can be quite tame and you’re able to drive sedately rather easily, which is in keeping with the Turbo’s traditional, grand-touring nature (and why the Lightweight Package ultimately feels anathema to it). 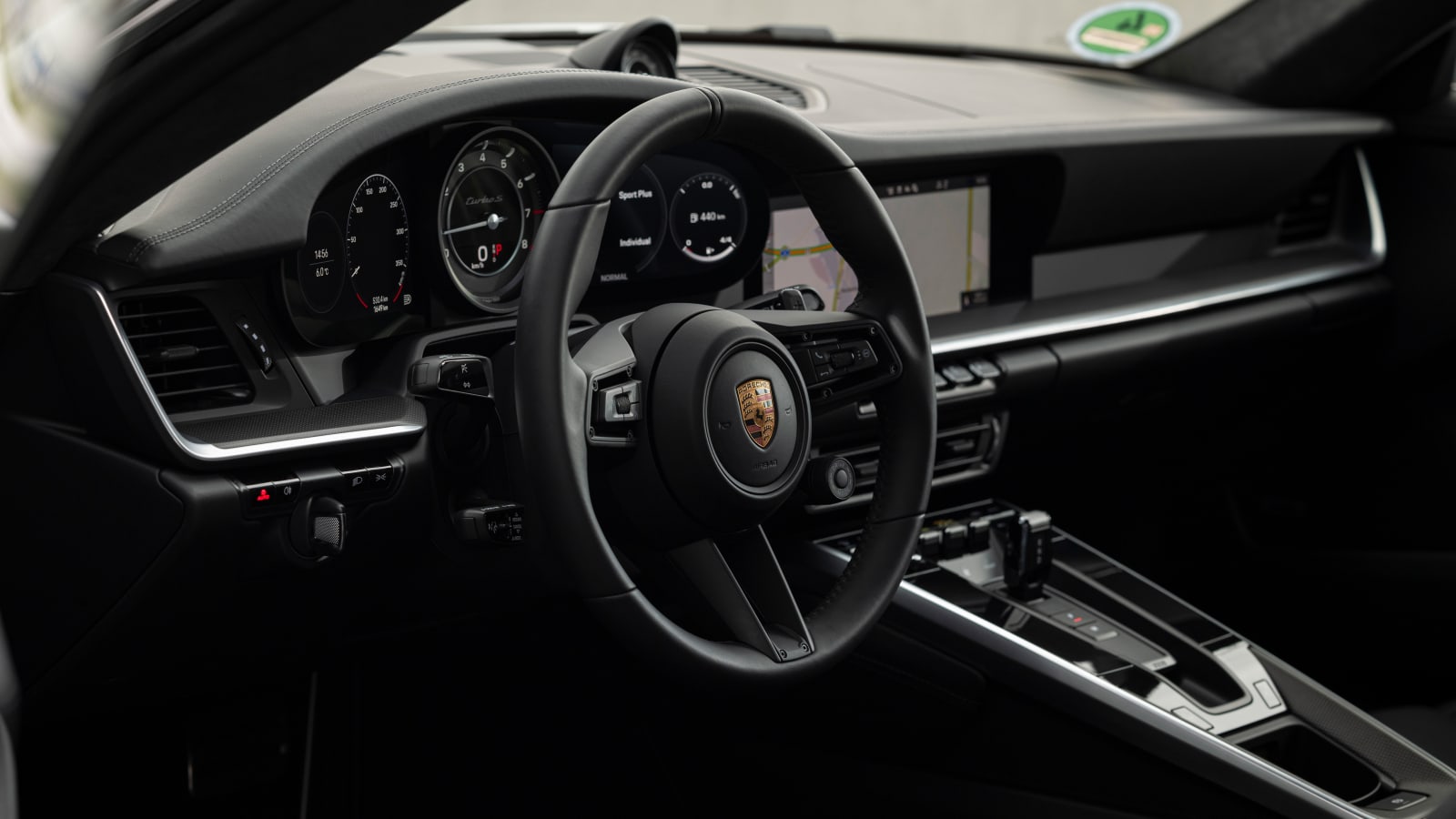 You barely have to use the brakes, because if you did, you’d either be going WAY too fast for the public road in question or something has gone terribly wrong. There’s a lighter-weighted, let’s say, more usable portion of the pedal you generally react with, but get on it, and you’re greeted with a firm, reassuring resistance that would indeed be superb for track use.

Handling? What can be said beyond it being one of the best cars, period, to tackle a road that twists and turns, regardless of whether it’s monitored by a constabulary or a man with a checkered flag. It just goes goes goes with grip, grip, grip courtesy the Turbo’s even wider track for this generation, a larger rear wing and a jungle’s worth of rubber. The all-wheel-drive system seals the deal by providing added peace of mind and prevents a good throttle whack from roasting the tires (or worse), but it’s still a very rear-biased system that tidily rotates the car in a manner that feels genuinely 911 in nature.

Does it have the best steering in the world? Well, no, that would be the GT3 or something exotic that’s yet to grace the Autoblog garage, but it’s at least in the vicinity of the podium. You feel every nuance of the road to the point that it even follows the topography of the pavement. Rear-axle steering is standard, and certainly contributes to the car’s exceptional agility, but you don’t notice it in the same way you do in a vast luxury sedan with a RWS system that can feel like a Disney attraction. 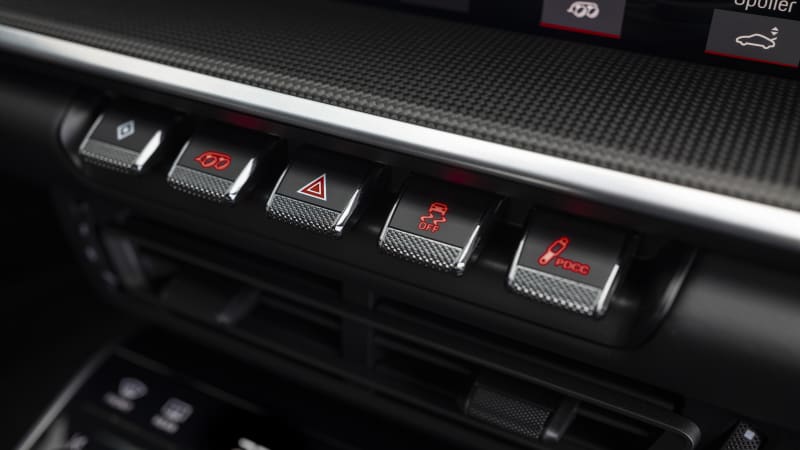 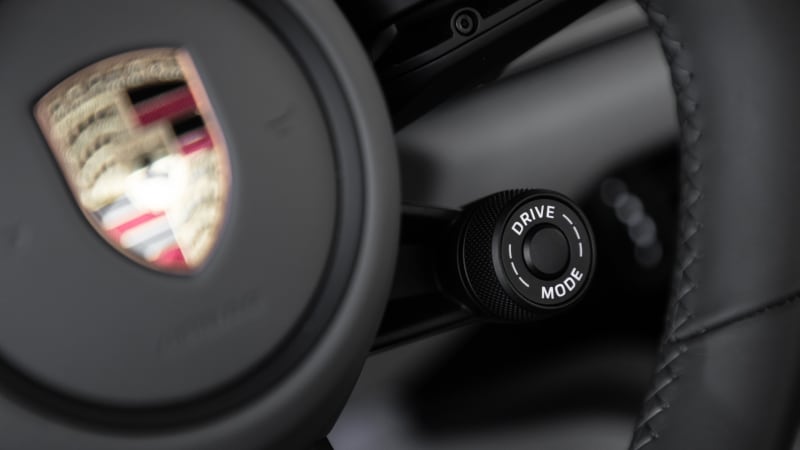 The ride? At slower speeds, and especially on more neglected pavement, the Turbo S with the Lightweight Package is not a pleasant car to putter about in. As speeds rise, however, Porsche’s suspension wizardry does its thing and you’re left with a compliant, sufficiently comfortable ride that never got tiresome despite several hours on the road. Ditto those fixed-back bucket seats, even though this driver fully admits that the recline angle basically mirrors my normal seating position. I also tend to like firm seats.

It’s also probably worth noting that for a car costing $223,230, the interior underwhelms. Maybe it’s just the new design and the increase in finger-print-collecting piano black trim, but it looks and feels a bit cheap. And not just for the price. Tarting it up a bit using Porsche’s endless customization catalog would certainly help, as would deselecting that Lightweight Package box, but it doesn’t seem right that you have to. And if I’m to nitpick, the touchscreen’s icons/buttons are too small – basically the width of an average pinky, which makes them awfully hard to use when you’re wiggling and jiggling around on neglected pavement.

The interior issues are things you’d have to deal with in any Porsche 911, however, no matter which slice you cleave off. To be absolutely clear, though, providing such vast, nuanced customer choice is not a bad thing. If Porsche wants to create a 911 perfectly suited for tight, technical tracks built before 1974 in sub-tropical deserts with no fewer than 12 turns but no more than 19 and berms painted dusty green, why the hell not? Choice will never be a bad thing.