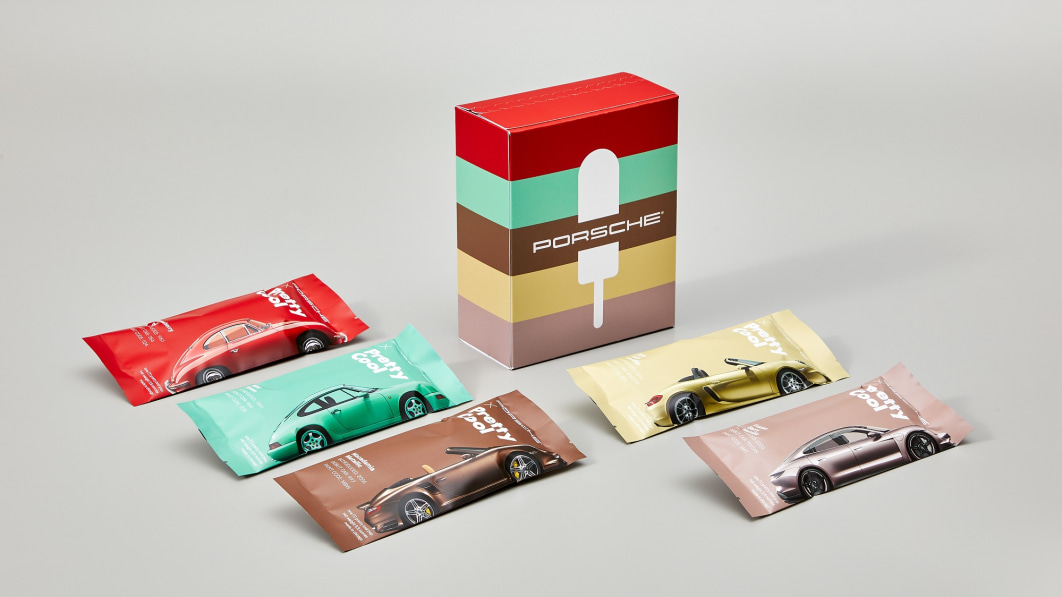 Porsche keeps finding creative ways to celebrate its heritage. After releasing 911 Carrera RS 2.7-inspired Puma shoes, it teamed up with Chicago-based Pretty Cool Ice Cream to create limited-edition ice cream pops whose flavors are a tribute to current and past paint colors.

Each flavor is packaged in a wrapper that shows what the color it’s named after looks like on a car and provides basic details, like the year it was introduced in, the model that inaugurated it, and the paint code. Macadamia Metallic was first seen in 2006 on the 997-generation 911 and it’s assigned paint code M8W. Mint Green appeared in 1991 on the 964-generation 911 and it’s referred to as 22R internally.

If you’ve read this far without craving ice cream, a Porsche, or both (not at the same time; mind the upholstery, please), the description of each flavor should do the trick. Mint Green is a green mint cookies-and-cream ice cream with a mint green white chocolate shell. Strawberry Red is cream cheese ice cream dipped in a strawberry red shell, and it’s made with real freeze-dried strawberries. Frozen Berry Metallic is a black raspberry ice cream in a sparkling frozen berry-colored ruby chocolate shell. Finally, Lime Gold Metallic is a key lime pie ice cream in a sparkling lime gold-colored caramel shell. Each pop weighs 3.8 ounces, which sounds like a nod to the 3.8-liter flat-six used in some 911s.

Pretty Cool Ice Cream’s Lincoln Park location will sell the limited-edition ice cream pops on July 17; if you’re in the Chicago area, that’s the one located on 709 West Belden Avenue. Porsche notes that it will also make the pops available at select events that it hosts later in 2022.

We don’t know if this is a one-time collaboration or if the Porsche-inspired flavors will be added to Pretty Cool Ice Cream’s palette of flavors. If more pops are in store, we’d like to suggest (and we humbly volunteer to try) Cognac Brown Metallic and Toffee Brown Metallic.